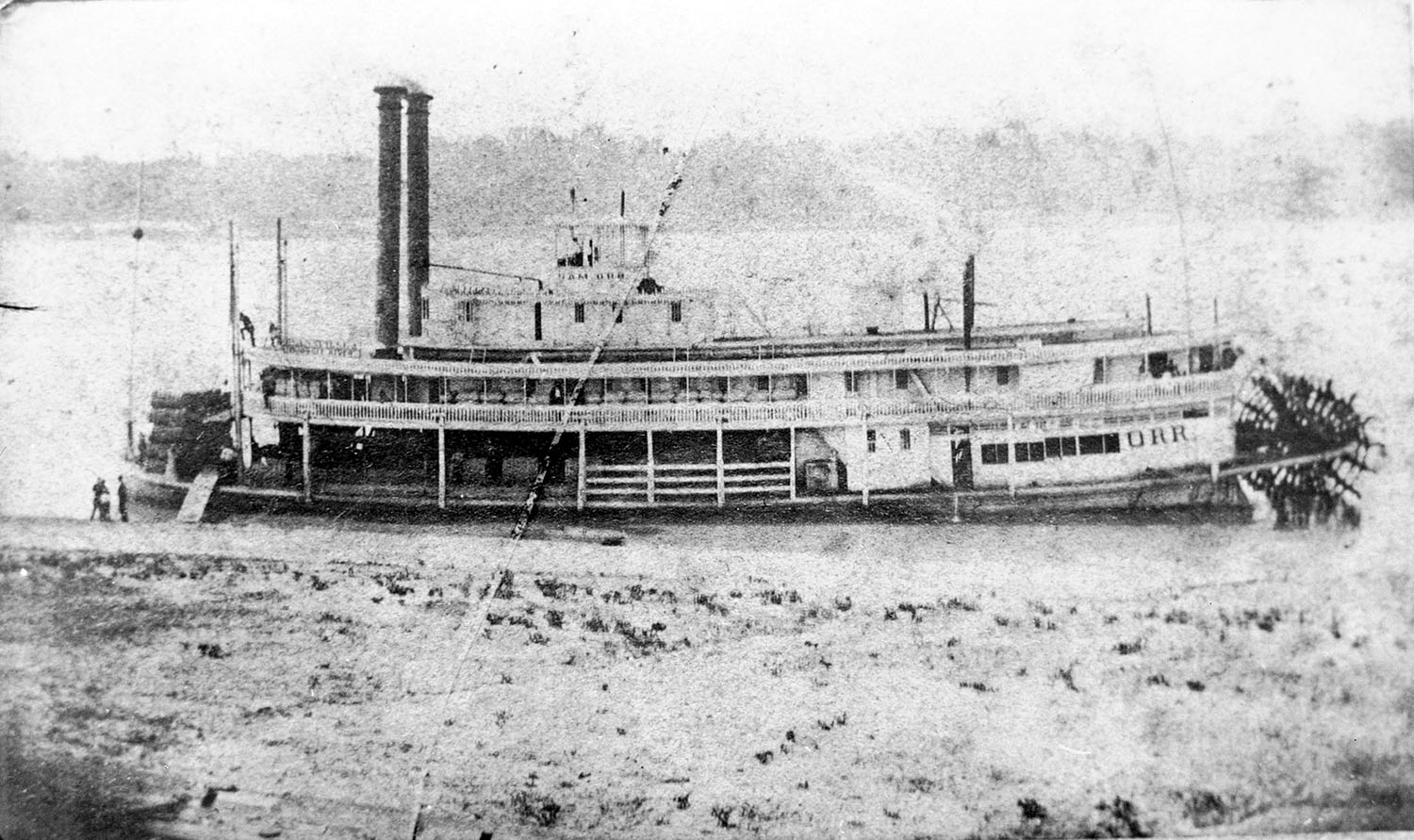 Paducah Citizens Were Levied For Loss Of Sam Orr

In the years 1867 and 1868, a tax was levied against the residents of Paducah, Ky., in order to satisfy a judgment obtained by the owners of the packet Sam Orr to cover the loss of the boat and cargo.

The Sam Orr was built at New Albany, Ind., in 1861 for a group of owners in Evansville, Ind., with the intent of operating it on the Wabash River. The Orr was a sternwheel steamer with a wood hull 150 by 29 by 5 feet. When the boat proved to be too large to run on the Wabash it became an independent packet running various trades.

The Civil War was in full swing on August 22, 1861, when the small packet W.B. Terry, reportedly engaged in commerce with the Confederates, was captured at Paducah by the U.S. gunboat Lexington, in command of R.N. Stembel, and immediately taken to Cairo, Ill. According to a report by Col. Richard Oglesby, commander of the U.S. forces at Cairo, the Sam Orr arrived at Paducah a short time later. A letter from Capt. W.H. McClurg of the Sam Orr was included in the report, and Capt. McClurg stated that after landing, the boat was “forcibly taken” by a mob and departed up the Tennessee River (both the report and Capt. McClurg’s letter refer to the Samuel Orr, rather than Sam).

The letter went on to identify some of the mob as “Captain Johnson, late commander of the steamboat W.B. Terry, White Fowler, A.M. Winston and 40 or 50 other persons, we believe all citizens of Paducah.” The “White” Fowler named was actually Capt. Wythe Fowler, brother to Capt. Gus Fowler, of the Paducah steamboat family. This action was in direct retaliation for the seizure of the W.B. Terry. The Sam Orr was impressed into Confederate Navy service and the cargo, including U.S. mail, disappeared with the boat.

The immediate result was that the Federals issued an embargo on the city of Paducah, allowing no trade until some arrangements were made for the return of the Orr and the cargo it carried. The embargo was later relaxed to relieve fears of famine in the city, and in February 1862 the Confederates burned the Sam Orr along with some other boats to prevent their capture.

With no hope of the return of the Orr or the cargo, the judgment against the city of Paducah was entered, which ultimately resulted in the tax levies of 1867 and 1868. The hull of the burned Sam Orr was salvaged and rebuilt for the original owners, entering service in January 1865. According to Way’s Packet Directory, it was sold in 1871 to John Kutsch, Tell City, Ind.

In 1875, a new wooden hull was built at Grandview, Ind., measuring 136.5 by 25 by 4.7 feet, and the machinery as well as much of the upper works of the Sam Orr were placed on it. This somewhat new vessel, named Robert Young (sometimes referred to as Robert J. Young) was set up for towing produce boats, and it was owned by Kutsch and John Wilburn.

Way’s Steam Towboat Directory says that in March 1875 the Robert Young, with Capt. John Kutsch as master, delivered a tow of produce boats to New Orleans. Kutsch sold the cargo for a reported $10,000 and sent the Young back upriver while he remained in New Orleans. He later left New Orleans on the Thompson Dean, which overtook the Robert Young. Kutsch left the Dean at Lake Providence, La., and reboarded the Young there. Capt. Kutsch reported that he had been robbed of his funds, and his business partner, Wilburn, took legal action against him. The Robert Young and four barges were sold at a U.S. Marshal sale on July 7, 1875, going to John A. and Richard Wilburn for $2,800. The boat was again sold on September 4, 1875, to Wilson H. Daniel, Troy, Ind. Way’s states that local papers indicated the boat was to go to New Albany, Ind., for remodeling, and then to the Arkansas River, but no records of it remain beyond this point.

The March 1971 S&D Reflector carries a detailed story of the Sam Orr seizure, with much research by the late Bert Fenn, Henry A. Myer and others.

Caption for photo: The Sam Orr at an unknown location. (Photo located by Paul Seabrook, published in the WJ)