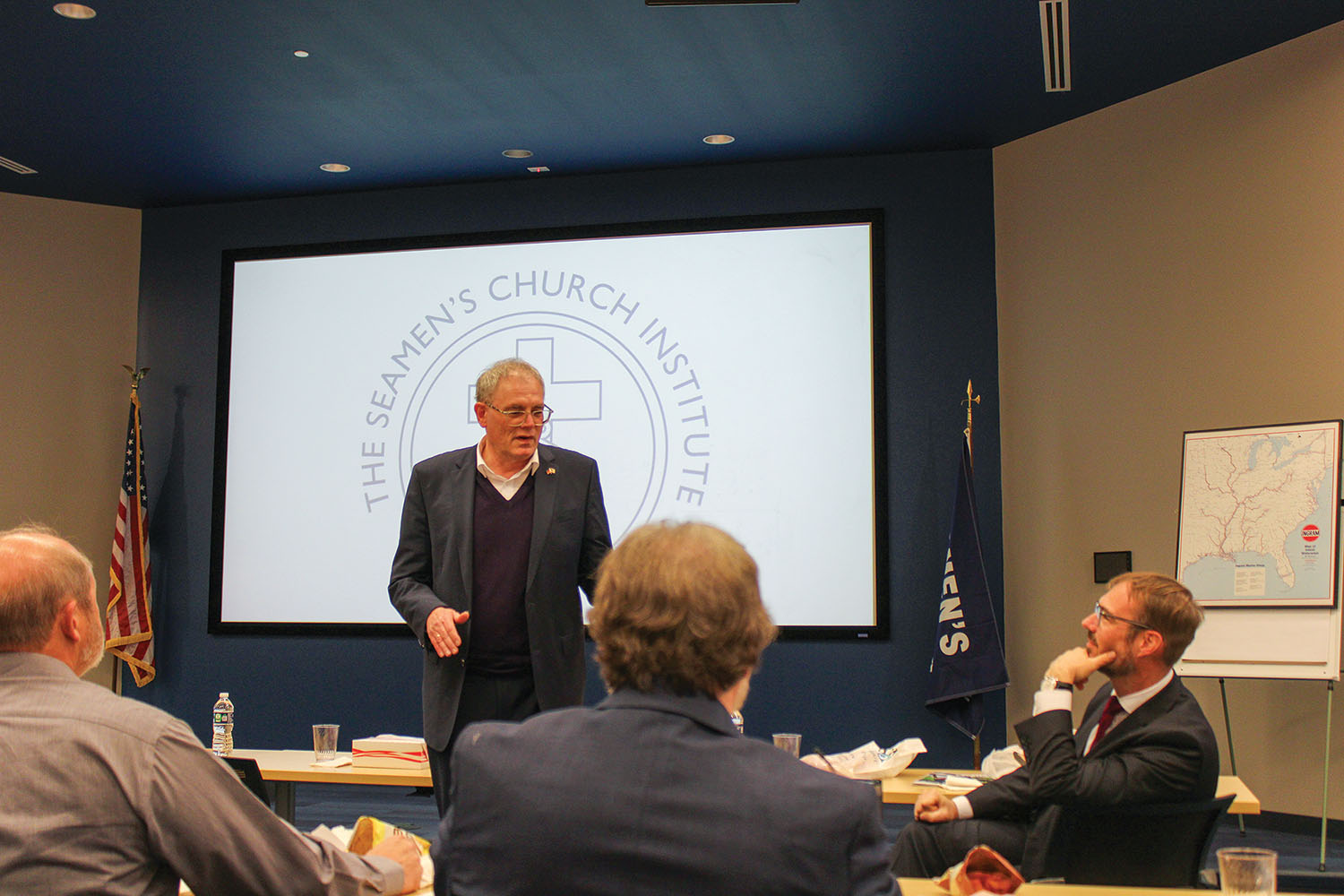 Gathered around a map of the inland waterways of the United States, a four-person delegation from the German Ministry of Transport only had two words: “unbelievable” and “wow.”

Another map showed the officials, who visited Seamen’s Church Institute’s Center for Maritime Education in Paducah, Ky., on October 19, the drainage basin of the Mississippi River and its tributaries and why Paducah is called the hub of the inland waterways industry, with the Ohio and Tennessee rivers meeting in Paducah and the Ohio’s confluence with the Cumberland and Mississippi rivers just upstream and downstream, respectively.

They specifically asked to see Olmsted Locks and Dam, so Deb Calhoun, senior vice president of Waterways Council Inc., suggested a lunchtime visit to Paducah first to meet with local representatives and learn more about the role the city plays in the industry.

“I said, well, you absolutely have to come to the epicenter of the marine industry, and that is Paducah,” Calhoun said.

While the group had already toured the Port of New Orleans, seen a fleeting area, been out on a towboat and visited with the associate administrator of the U.S. Maritime Administration, Maritime Partners and Schottel Inc., among others, members still were visibly enthused as they drove a simulated towboat through Pittsburgh, Pa., taking photos of each other at the sticks with their cell phones.

“We’ve really learned a lot,” Salomon said while introducing himself to the local contingent. “We’ve met a lot of people, very interesting people.”

While the government of Germany is highly involved in maritime navigation, including with colleagues in the United States, that nearly always means freight that travels over the ocean, Salomon said. The visit to the United States was designed specifically to help the delegation learn more about inland river transportation.

“I thought it’s time to come to America to see what perspectives you have with inland navigation, what problems you have and how you can solve all these problems,” Salomon said.

He said he had learned many of the issues those in the transportation sector in the United States have are ones the Germans share, and that he thinks cooperation would be worthwhile. As an example, he said the group had seen the Mississippi River by plane and also the effects of recent low water on navigation.

“And I just remember that we also have low water, on the River Rhine,” he said.

Those gathered to meet the German visitors ensured they left Paducah with a far greater appreciation of the effect of inland navigation on the economy.

Bruce Wilcox, president/CEO of the Greater Paducah Economic Development Corporation, noted that three-fourths of inland navigation traffic passes by or very near Paducah.

Ken Wheeler, a retired industry professional, told them more than 6,000 employees in Paducah work as a direct part of the river industry, with another 20 firms that provide associated services to the industry as needed.

Chad Dorsey, director of MarAd’s Inland Waterways Gateway Office in Paducah, talked about the increasing importance of better utilizing the inland waterways system, especially given a shortage of truckers and congestion on railways.

McCracken County Judge-Executive Craig Clymer briefly mentioned the summer he spent as a deckhand years ago before noting that western Kentucky has the largest concentration of navigable rivers in the world.

Fowler Black, sales director at the Paducah Convention and Visitors Bureau, drew comparisons between Paducah, one of nine UNESCO-designated creative cities in the United States, with four UNESCO-designated creative cities in Germany. He said Paducah participated in the program in part because, like the German group, representatives from Paducah believe the city will benefit from an international exchange of ideas.

Calhoun emphasized the enormity of the U.S. inland river system in her presentation. The system of waterways connects 28 of the U.S. states but has an impact on all 50, she said. It includes 12,000 navigable miles of river and directly employs 540,000 people while moving about 500 million tons of freight annually. The river industry saves $7-9 billion in transportation costs annually compared to rail and truck, she said.

While Calhoun she said she loved telling about the accomplishments of the industry, it was only fair also to talk about a major challenge, which is that more than 80 percent of locks and dams—critical river infrastructure—are beyond their 50-year design life. Thankfully, she said, federal recognition of the importance of the system has grown, as evidenced by the $2.5 billion allocated for the inland waterways in the Infrastructure Investment and Jobs Act (IIJA) signed into law November 15, 2021.

Before moving on to their Olmsted tour, Salomon thanked those gathered for welcoming the group, giving of their time and providing so much information about the industry.

“I will always remember this trip, and hopefully this is the beginning of a new, intensive cooperation,” he said.

Caption for top photo: Dr. Norbert Salomon, head of the Waterways and Shipping Department of the German Ministry of Transport, introduces himself and the rest of the four-person delegation. (Photo by Shelley Byrne)