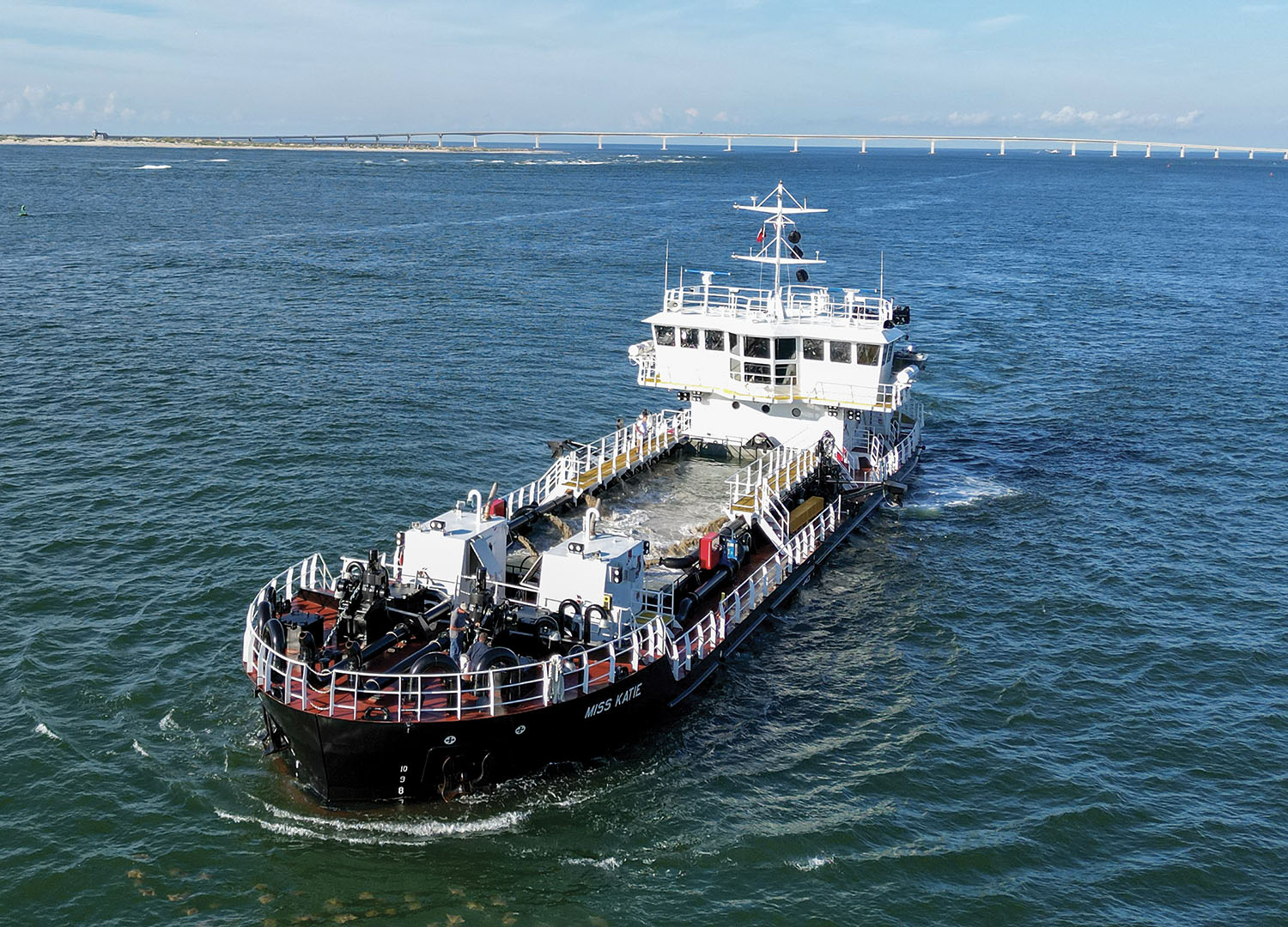 A unique public-private partnership has resulted in the completion of a dredge that will spend its time primarily at two inlets off the coast of North Carolina.

Dare County, N.C., and EJE Dredging Service, LLC partnered on the shallow-draft, split-hull hopper dredge Miss Katie. It was christened October 13 at its homeport of Wanchese, N.C. Funding for the project came from a public-private partnership with the state of North Carolina, in which the legislature allocated $15 million from the Shallow Draft Navigation Channel Dredging and Aquatic Weed Fund in 2019.

The Miss Katie is owned and operated by EJE Dredging Service and will provide dredging to the county for the next 10 years at a reduced rate in return for the state loan being forgiven. The agreement includes provisions for a renewal of the contract for additional years.

“Conrad Shipyard is proud to have built the Miss Katie for EJE Dredging Service and Dare County,” Conrad Shipyard CEO and Chairman Johnny Conrad said. “This was a collaborative effort between our dedicated shipyard personnel and our partners that will benefit the community of Dare County. We look forward to continuing to provide our quality equipment to the dredging community, coast to coast.”

Under the direction of the Oregon Inlet Task Force, the Miss Katie will help address the significant shoaling in the Oregon and Hatteras inlets to keep them open and navigable for both commercial and recreational vessels. It is permitted to work anywhere in the state of North Carolina if a local government has the proper permitting and needs service the Corps can’t provide, said Bobby Outten, county manager for Dare County.

Outten said the Miss Katie addresses a significant need for nearly full-time dredging at the inlets, an integral part of the unusually shaped county, which is 100 miles long and less than 1 mile wide in some places.

“For years we’ve been looking for ways to figure out how to get more dredging,” he said.

While the Corps of Engineers has dredges, they could only dedicate a small part of their time to maintaining the federally funded inlets, he said.

Additionally, he said the inlets are “small and tight by comparison,” which meant some hopper vessels were too big to fit. When the county tried dredging via a pipeline, it only lasted about a year, he said.

The issue was urgent as Oregon Inlet is the access point for the county’s large fish processing industry. While the inlet is authorized to be maintained as 14 feet deep and 400 feet wide, in some places the channel had silted to a depth of 5 feet, Outten said. That prevented fishing trawlers from accessing it.

“We have the ability to do a lot more processing than we’ve been able to do if we can just get the trawlers in there,” Outten said.

Dare County lands more commercial fish than any county in the state of North Carolina, Outten said. The county is also home to a shipyard for sport fishing vessels, a charter boat industry and recreational fishing community.

“The dredge is here and working, and everything is going as planned for the most part,” Outten said. “We’re really excited to have it here.”

The christening celebration October 13 included a community day, during which members of the public were invited to take a tour of the dredge, listen to live music and have refreshments.

“I know all of us have waited very patiently for years for Miss Katie, who will play an integral role in helping to keep our waterways open and navigable for both commercial and recreational vessels—and let me tell you, folks: the vessel that is docked beside me here today was definitely worth the wait,” Woodard said as the ceremony began.

Tobin highlighted the fact that the public-private partnership that was formed to develop the dredge is believed to be the first of its kind in the nation.

“We went out and did a public-private partnership—the first one in the United States,” he said. “There are many, many other people watching what we did. Every time we’d go to one of these meetings—we just got back from a meeting in Wilmington—and people asked about this particular vessel and how we did it. Here she is, and I’m proud to be a part of it.”

Woodard also commented on the relevance of the project and its importance to the Dare County community.

“Dare County is home to many firsts,” he said. “It’s where flight began with the Wright brothers. This is just another step in the history of Dare County. This is unheard of throughout the United States. It’s incredible, and I’m proud to say that we’re first in a lot of things in Dare County. It takes a lot of people to make something like this come to fruition, and I can’t thank them all enough.”

After taking time to praise the crew, many of whom call the Outer Banks home, Hennessy offered insight into the naming of the dredge, explaining that it serves as a tribute to Caitlyn “Katie” Whitehurst, whose life was tragically taken by an act of domestic violence on May 13, 2019. Katie was the daughter of Judson Whitehurst, who serves as Hennessy’s partner at EJE Dredging Service.

“It’s very close to my heart and very close to a lot of families’ hearts that are here in the audience,” he said. “Katie was tragically taken from us, from the family, from this world that day.”

To conclude the ceremony, Brooke Burr, the senator’s wife, joined Hennessy to break a bottle of champagne over the deck rail to bless the Miss Katie with good luck and safe travels.

The Miss Katie is designed specifically for the waterways in which the dredge operates, Hennessy said.

The hopper size is 512 cubic yards, which makes it capable of holding as much as 50 dump truck loads of spoils.

One of the more interesting features is that spoils can be removed from the vessel either by splitting open down the middle or by throwing material with the rainbow/sidecasting system, Hennessy said.

Additionally, “The vessel is very maneuverable due to installed Z-drives and bow thrusters,” he said.

With sound and vibration damping from Robicheaux Manufacturing Inc., including the Robdeck 2.0 Floating Floor and Pyrotek Decidamp SP150 on engineroom bulkheads, the Miss Katie is also remarkably quiet, he said. “When in operation, the vessel is extremely quiet due to the sound treatment options installed.”

Main generators are Cummins QSM11-DM models at 250 kW and a 99 kW Cummins QSB7-DM emergency generator. The Miss Katie has Fernstrum Gridcoolers. Electronics and communications equipment were provided by Furuno. Engine alarms are by Engine Monitor Inc. Air conditioning and heating are by Juneau Marine. Wastewater treatment is Redfox RF-200-M. Fire protection is through the Hiller Companies Siemens Fire Detection System with an FM-200 clean agent and high pressure CO2 fire suppression system. Paint and coatings are by Sherwin Williams.

The Miss Katie typically runs with a crew of five people, and EJE hopes to run it 24 hours in the waterway while in good weather.