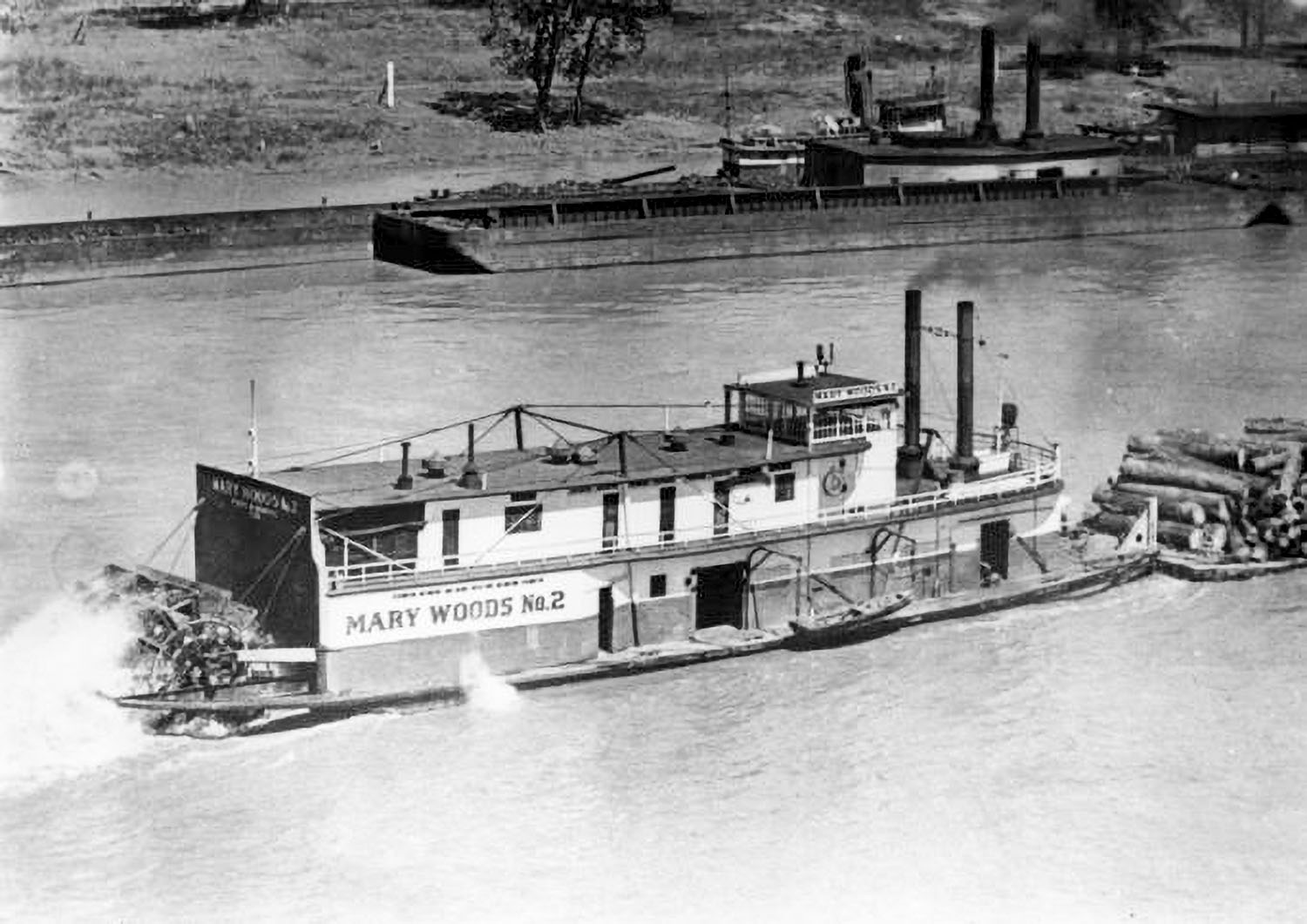 The Mary Woods No. 2

Steve Huffman has compiled a new Gas & Diesel Sternwheel Towboat Calendar for 2023. The front cover features the sternwheel towboat Mary Woods No. 2, a great candidate for an Old Boat column since it still exists, at least in part.

The original Mary Woods was a sternwheel steamer built at Paducah, Ky., in 1926 for the Woods Lumber Company of Memphis. It had a wood hull that was 96 by 22 feet and was used by the company until about 1930. Way’s Steam Towboat Directory offers no further information on this boat.

In 1931, the Woods Lumber Company contracted with the Nashville Bridge Company, Nashville, Tenn., for a steel hull 111 by 26 by 4.4 feet for a sternwheel towboat. This hull was towed to Memphis, where it was completed as the Mary Woods No. 2. According to Way’s, the boat was equipped with a set of new Gillett & Eaton engines, 12-1/8’s with a 6-foot stroke. The boilers came from the Frank E. Woods, a wooden-hulled boat that had been built as the Chastang in 1911 at Bridgeport, Ala., sold to the Woods firm in 1929 and dismantled as the Mary Woods No. 2 was completed.

Huffman has compiled an extensive file on the Mary Woods No. 2. His records say that the boat was named for a daughter of Eugene Woods, as was the earlier boat that had burned. The second boat was originally a coal burner, but it was converted to burn bunker C fuel oil in 1937. It initially handled a tow of two barges, each capable of handling 85,000 board feet of logs, and it operated primarily on the Lower Mississippi River under Capt. George Thomas. After the Woods Lumber Company purchased the White River Lumber Company, it ran on the White and Cache rivers under a Capt. Emmons.

In 1949, the Mary Woods No. 2 was converted to diesel power at Memphis by the Woods Lumber Company. A pair of Caterpillar diesels totaling 400 hp. were installed at that time. In 1960, the Woods interests were sold to Potlatch Forests Inc., Clarendon, Ark. Potlatch retired the boat in 1967 and donated it to the Arkansas State Park system. It was moored at Jacksonport, Ark., on the White River.

The boat was made to look like a 19th-century packet and renamed Paul Jones for use in a PBS special on Mark Twain in 1979. In 1984, the boat sank, but it was raised and restored. On March 1, 1997, a category F4 tornado hit the vessel, doing much damage, including toppling the stacks and blowing the pilothouse into the river.

The Mary Woods No.2 was restored after the tornado and brought back to appear as it did originally. Alan L. Bates, who once authored this column, provided input for this project, and the boat was again open to the public in 2002. On January 31, 2010, the boat sank due to what was at first thought was vandalism but was later determined to be a leak from a pipe. During the raising operation from this sinking, the wooden superstructure disintegrated, leaving only the hull, sternwheel and machinery. It was determined that restoration was not feasible. The remains of the boat were sold to new owners, who intended to restore it for use as a restaurant, but that conversion never took place. At the present time the hull of the Mary Woods No. 2 is reportedly sitting on the bank of the White River between Mile 257 and 258.

The 2023 Gas & Diesel Sternwheel Calendar features, in addition to the Mary Woods No. 2, the Belfont, Judge Ross, Philip Ritchie, Susie, Pittsburgh, L.G. Beaver, R.J.B., Mary Alice, St. Dennis, Prosperity, Tennessee, Pattie T and Charlotte. It is available from Draftware Inc., 41 Ems W32, North Webster, IN 46555, or online at www.draftware.com/calendar. The cost is $15.95 plus $4.50 for shipping, and an additional $1 for each additional calendar.