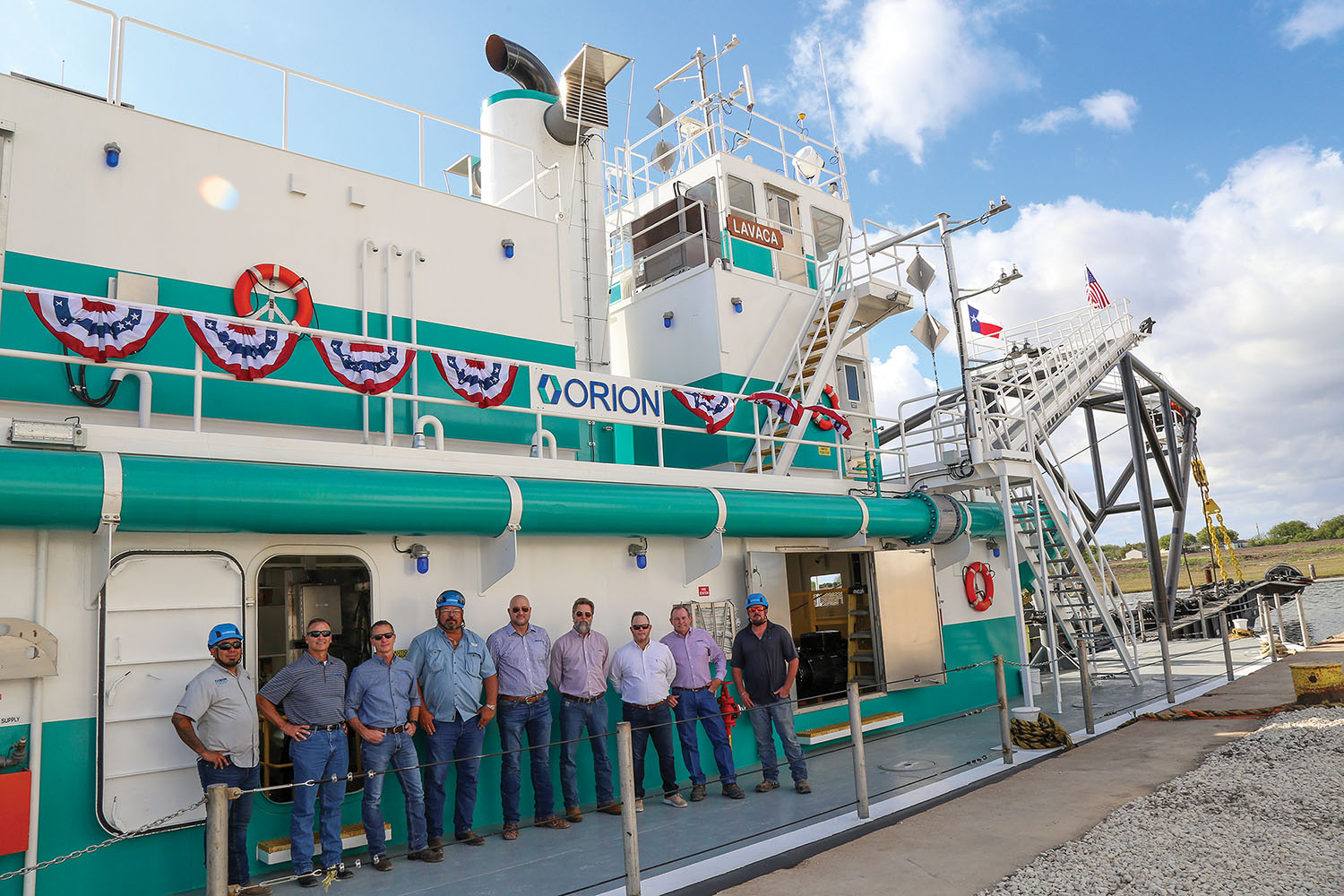 The Lavaca, formerly called the dredge Everett Fisher, underwent a complete rebuild at Southwest Shipyard that spanned 15 months, with The Shearer Group providing detailed engineering for the project. At the shipyard, the dredge’s hull was both lengthened and widened to now measure 135 feet by 42 feet, up from its original dimensions of 118 feet by 30 feet. The Lavaca remains a 20-inch cutter suction dredge.

“Additionally, advancements to the dredge’s ladder, accommodations and operations systems were made in order to continue to provide exceptional dredging service to its clients and industry partners in both public and private sectors along the Gulf Coast,” the company said in its announcement of the christening.

To allow for deeper dredging, Orion extended the dredge ladder by 20 feet and installed a new gantry A-frame to support it. The Lavaca’s maximum dredging depth is now 62 feet.

The Lavaca is powered by Tier 3 generators from Mustang Cat, which drive electric winches from Nabrico and Timberland Equipment. Avid and DSC Dredge supplied the Lavaca’s electrical switchboards and control systems. Rio Marine and Rio Controls & Hydraulics outfitted the Lavaca with its electrical cabling, lighting and alarm systems.

The Lavaca is equipped with the latest technology, including continuous survey monitoring systems, dredge pump, draw works and cutter automation systems, and offers fully electric draw works and spud winch systems for more efficient operations and reduced emissions. The dredge’s new modular quarters, walkways, access points, ventilation, handrails and fendering system were all engineered and designed with an emphasis on safety. Crew quarters were rebuilt with sound dampening and vibration reduction technology to “provide a reprieve for the crew during their rest periods,” the company stated.

The new lever room aboard the Lavaca features an open concept, floor-to-ceiling windows that offer a 180-degree field of view and a touchscreen-display-equipped, specially designed control station.

Orion said the Lavaca will begin its first job this month.

The Everett Fisher, originally built in 1968, became part of Orion’s dredge fleet in 1998 with the company’s acquisition of King Fisher Marine Service.