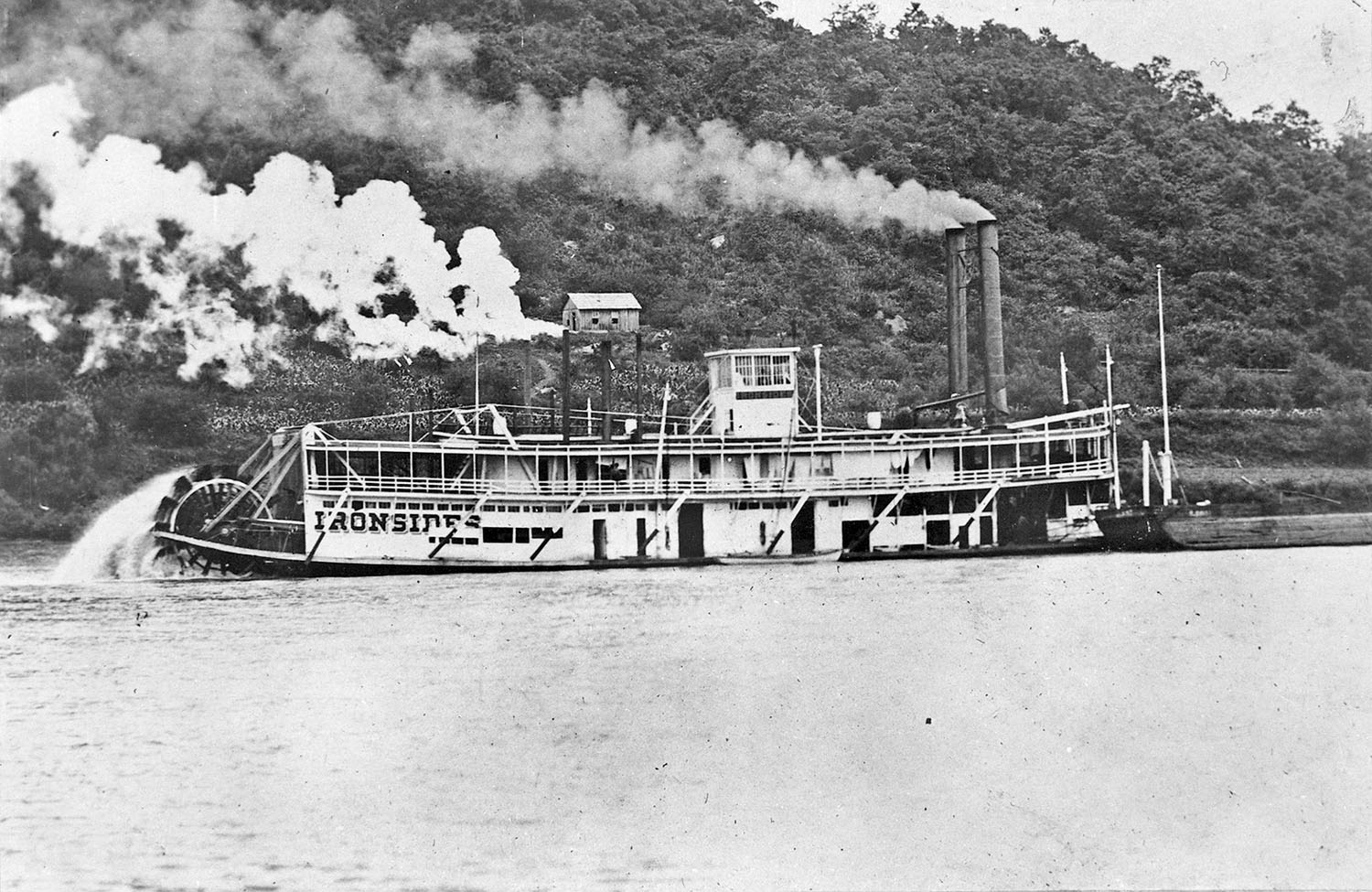 The W.K. Field Had A Long Life

The subject of this column was prompted after Jeff Wilkes, riverman, realtor and historian from Savannah, Tenn., recently sent this writer a photo of a sunken boat that he had found in a photo album he had bought.

The sepia-toned photo was somewhat blurry but was of a steam sternwheel towboat sunk against a riverbank. Even after enlarging the view, the name on the pilothouse couldn’t be read, but the last two letters appeared to be “LD.” A few days later, while looking at photos of another boat, the mystery boat became evident. In one view the boat being researched was tied below the sunken W.K. Field, and at first glance it was obviously the vessel that was in Jeff’s photo.

The W.K. Field was originally the Ironsides, built in 1869 for Gray’s Iron Line. Gray’s Iron Line dated from 1863, formed by Capt. Richard C. Gray of Pittsburgh. Among the earliest of barge lines, Gray’s had a fleet of barges that had hulls somewhat similar to that of a sidewheel packet upon which was a raised cargo box resembling a building. The bow was modeled to a sharp point, and hog chain bracing was installed. These barges were used to bring iron ore and pig iron from the Upper Mississippi to the Pittsburgh area mills. General cargo items including finished iron and steel were shipped back.

The Ironsides seems to be the first towboat built for Gray’s. It was constructed at Pittsburgh on a wood hull 154 by 30 by 5.4 feet. The engines were 20’s – 7-foot stroke. According to Way’s Steam Towboat Directory, the very first round trip the boat made to St. Louis took seven months due to low water, yet still made a profit of $3,000. The Ironsides later towed the model barges from Pittsburgh to St. Louis and New Orleans and was reportedly at Nashville, Tenn., in the spring of 1886. Way’s says that this boat was the “old favorite” of the Gray’s Line, and in 1900 the floating stock of that concern was transferred to the Monongahela River Consolidated Coal & Coke Company. The towboats had a large “R.C.” on the sides of the pilothouse, and the barges were similarly marked; the letters stood for “River Coal,” but among river interests the conglomerate was known simply as the Combine.

The Ironsides towed coal for the Combine, and was rebuilt at Elizabeth, Pa., in 1912. Shortly after this it was renamed W.K. Field. By 1914 it had the distinction of being the oldest wooden-hulled towboat on the Western Rivers. In 1918 the Field was again rebuilt at the Elizabeth Marine Ways, and at this time the pilothouse, which had previously been on the roof, was set down pool-style. In July 1919 it was sold to the Island Creek Coal Company and towed coal from the Kanawha River to Cincinnati.

During this time, the W.K. Field had some notables working aboard. In July 1922 Capt. J. Emory Edgington was master. He would still be standing watches aboard the Str. Avalon in his upper 80s and stood his last watch aboard the Delta Queen at age 92. Another notable riverman on the Field was Capt. Wilbur Chapman. He came to the boat in 1924 after having worked for the Greene Line, and the W.K. Field was his first towboat work. In 1936, he would bring the new steam sternwheel towboat Omar out of Dravo for The Ohio River Company. He would remain the master aboard it until 1944, when he was succeeded by Capt. Coleman Lucas.

On January 16, 1923, the W.K. Field, with a 12-barge tow, was the first boat to lock through Ohio River Lock 33 at Maysville, Ky. In 1927, it was laid up at the Marietta Manufacturing Company, Point Pleasant, W.Va., and sank there on August 6 of that year. The boat was later raised, moved into the Kanawha River and beached at the Point Pleasant Dry Dock Company. That was the end of this venerable 58-year-old wooden towboat, built a mere four years after President Abraham Lincoln was assassinated, and a pioneer of barge line service on the rivers.