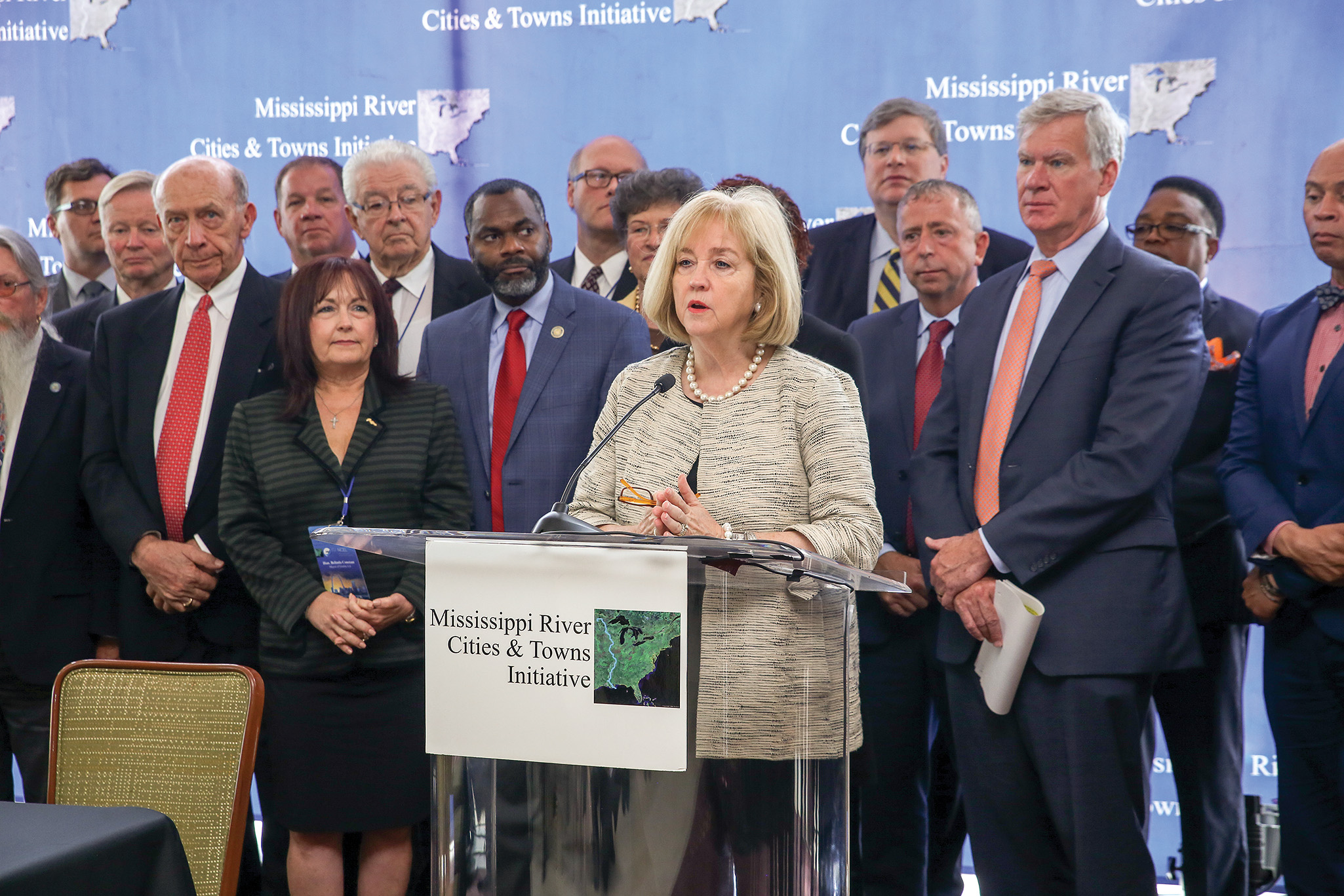 After graduating with an education degree from Truman State University, Krewson moved to St. Louis where she earned her accounting degree from the University of Missouri-St. Louis. Krewson is a CPA, formerly an auditor for Deloitte, and chief financial officer of PGAV, an international design and planning firm.

St. Louis has always been deeply involved with the Mississippi River Cities and Towns Initiative (MRCTI), a group made up of mayors of Mississippi River towns and cities that advocates for common interests that now has 124 members in 10 states. Originally formed in 2012, MRCTI became an independent nonprofit in 2015.

Waterways Journal: Your Honor, as you have been newly installed on the Executive Committee of the Mississippi River Cities and Towns Initiative, what are the top priorities of the MRCTI in the coming year?

Krewson: Jobs, economic opportunity and resilience. Infrastructure, both built and natural, is our top concern. St. Louis is uniquely positioned to benefit from growth in global trade, but it will take modernization and expansion of port infrastructure to take advantage of new opportunities.

I hope MRCTI can work with the shipping industry to develop an infrastructure plan that taps into the growing opportunity for trade along the river. We need to foster collaboration among river cities, shipping companies, and third-party logistics providers. We need to present a united front and advocate for policies we know will protect our waterways while also helping our region benefit economically from increased river traffic; initiatives like the repatriation of overseas cash reserves, pre-disaster mediation grant increases, the Marine Highway Grant Program, and the Water Resources Development Act.

WJ: In talking with other river mayors whose towns are part of the MRCTI, what insights have you gained on common issues affecting all the river towns?

Krewson: We all agree that the Mississippi River is our greatest asset and our best opportunity to drive economic growth within the region. The Mississippi touches nearly all facets of our regional economies, including manufacturing, tourism and agriculture. Many of us share a similar history and are all facing similar challenges as we try to reimagine our relationship with the river. I think people across the country are beginning to realize how important an asset the river is. That’s great for us, and though it will require hard work, I know that as a coalition we can move this region forward.

WJ:  How important is the region’s river-related economy to St. Louis? How is the recent investment in and growth of the St. Louis region as “America’s Ag Coast” helping to attract businesses to the region? What opportunities are the city pursuing with regard to river-related businesses?

From the north riverfront development plan and our potential tech corridor anchored by National Geospatial Intelligence Agency, to the Danforth Plant Sciences Center and the St. Louis Freightway, our innovation potential is tremendous.

Agriculture along the Upper Mississippi River generates $25 billion annually, supporting 136,000 jobs just in the river valley alone. Basin-wide agriculture generates $164 billion every year, and St. Louis is at the center of all that trade. We were recently awarded an intermodal planning grant from United States Department of Transportation to examine the next market plays for the Mississippi River using St. Louis as the anchor. We need to remain focused and drive these opportunities forward.

WJ: In recent flooding, the levees protecting East St. Louis seem to be generally performing well. Is the work to upgrade and improve the levees complete? How important is / was that work in attracting new businesses to the area?

Krewson: Levees exist to protect critical national infrastructure. The laws and regulations about levees are complex and easily confusing, leaving mayors and other local officials uncertain about how best to move forward. That’s why we need a unified approach to the levees in Missouri, Illinois and Iowa. I believe that the Corps of Engineers will help us assess where we can improve the levees and identify current risks.

In terms of attracting business to our area, we see productive agricultural land as a tremendous asset within our region, providing jobs and economy for our cities. Most MRCTI members are from rural communities where agriculture is an essential part of the economy. I am confident that we will be able to manage the levee system better and more sustainably to benefit surrounding communities and attract more business to the area.

WJ: How can St. Louis take advantage of the unmatched logistics density in this region?

Krewson: We’re lucky to have a lot of resources at our disposal here in St. Louis. Currently, the Port of St. Louis is using a federal planning grant to work with regional leaders to understand how we can best use those resources. I believe that process starts with identifying our core strengths through projects like creating a port asset inventory.

The Mississippi River plays a key role in our history as a region. It’s always been a way of bringing communities together and fostering economic development. I am confident that this legacy will remain as long as we continue to value the Mississippi River and work together to harness its benefits.