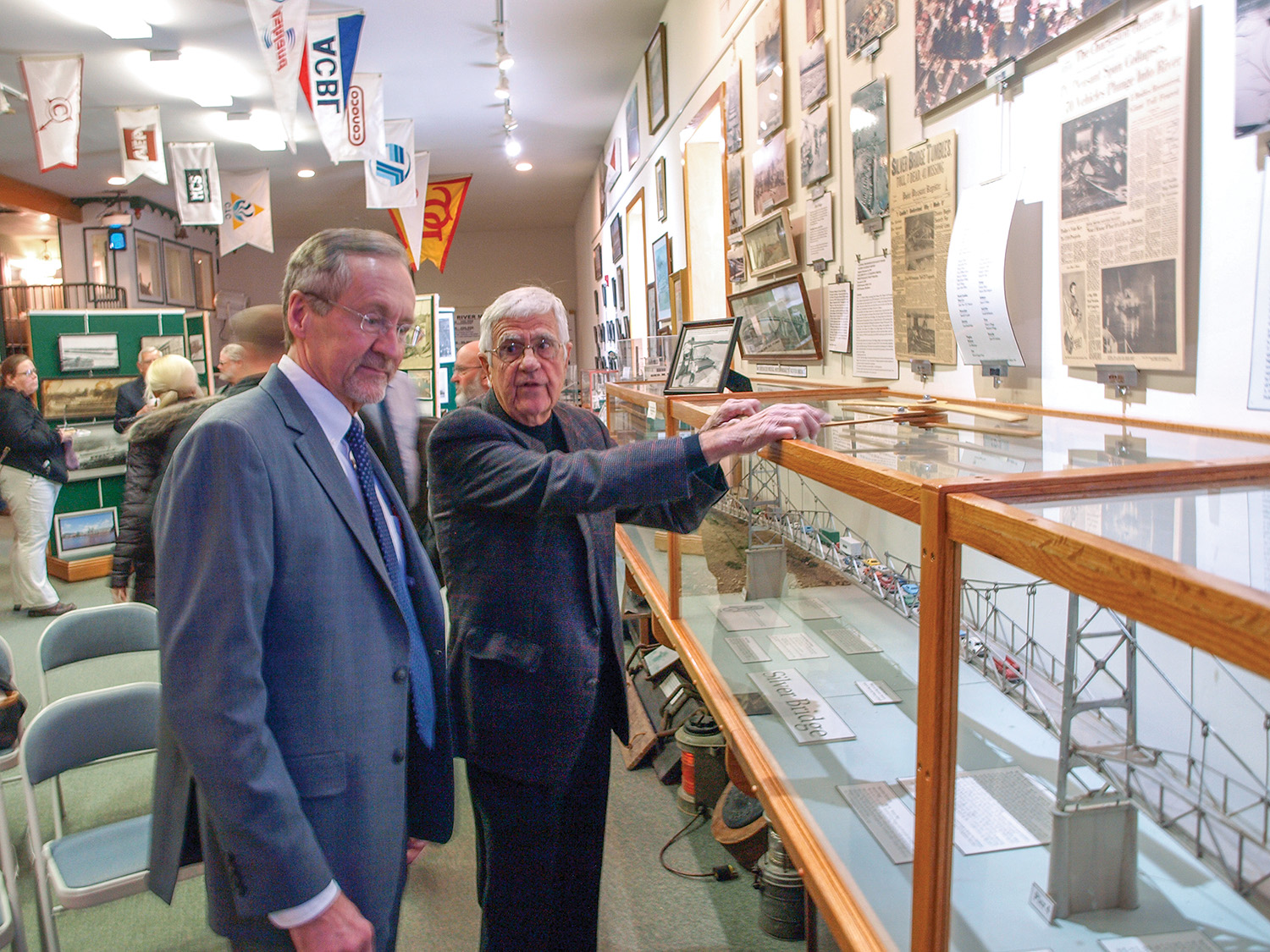 The communities of Point Pleasant, W.Va., and Gallipolis, Ohio, gathered the morning and evening of December 15 to mark the anniversary of the Silver Bridge disaster.

At 4:58 p.m. on Friday, December 15, 1967, a structural member of the bridge connecting the two communities failed and the bridge fell into the Ohio River, carrying 46 people to their deaths.

The disaster stopped river traffic for six days as recovery efforts removed victims’ bodies from the river and also removed the bridge itself so it could be reassembled in a field below the mouth of the Kanawha River and investigators could determine what caused the deadliest bridge collapse in American history.

At 11 a.m. on the 50th anniversary, about 400 people—many of them with a family or personal connection to someone on the bridge—gathered in Point Pleasant on the street that led to the bridge itself. Bill Edmondson, 88, a truck driver from North Carolina, who went into the river and was rescued, was one of them.

A tent covered the street and heaters were in place to keep people warm. West Virginia’s two U.S. senators were in attendance, as was Brandye Hendrickson, acting administrator of the Federal Highway Administration.

The names of each of the 46 victims of the disaster were read aloud by Mayor Brian Billings. Martha and Ruth Fout from the Point Pleasant Museum and Learning Center rang a bell after each name.

“Out of ashes comes beauty,  it is said, and the nationwide attention that  the collapse generated drastically changed the way that we approach bridge safety,” Hendrickson said in her keynote address.

“The Silver Bridge tragedy propelled the nation into a new era of bridge safety, and it was made official the following year when Congress called for a national bridge inspection program.”

At the end of the ceremony, a design for a floodwall mural at the bridge site was unveiled. Painted on the side of the floodwall facing traffic, the mural will show how the approach to the bridge looked from Point Pleasant.

That evening, smaller ceremonies in both Point Pleasant and Gallipolis around the time of the bridge collapse also memorialized the victims.

Many people talked about the immediate reaction to the disaster.

The Racine Locks and Dam, about 28 miles up the Ohio from Point Pleasant, was under construction at the time of the collapse. Dravo Corporation, the general contractor for the project, sent two 50-ton derrick boats to help with the recovery effort. The M.T. Epling Company of Gallipolis supplied two derrick boats also. The Huntington Engineer District sent the mv. Robert G. West and floating plant from the Marietta Repair Station to assist.

A navigation channel was opened December 21. By then, 39 towboats with 178 empty and 202 loaded barges were waiting to transit the area, according to Men, Mountains and Rivers, the official history of the Huntington District.

At the Gallipolis ceremony,  state Rep. Ryan Smith noted there were three people whose deaths were linked  to the Silver Bridge. After the bridge collapse, Ohio residents who worked at the Goodyear chemical plant at Apple Grove, W.Va., about 1.5 miles below the Gallipolis Locks and  Dam, used small boats to cross the river to and  from work. Their path took them  below  the plant’s barge dock. One day in March, one of the boats went around the upstream end of a barge moored there, lost power and was pulled under the barge by the current. Three men died.

The Silver Bridge’s fatal flaw could not have been detected that way. It was one of two bridges in the United States to be built with an eyebar suspension system. Instead of cables bearing the structure’s weight, the Silver Bridge used a system resembling a bicycle chain to hold up the bridge deck. One of the eyebar joints had a defect from the time it was built. The flaw was inside the joint and could not have been detected without taking the bridge apart. When the joint broke apart, the whole chain failed and the bridge fell into the cold waters of the Ohio.

One person at the ceremony who did not speak was Tracy Brown, a district bridge engineer for the West Virginia Division of Highways and a Silver Bridge historian.

“There’s not a day goes by that I don’t think of the Silver Bridge,” Brown said. He said he always tells his bridge inspectors to remember what happened at Point Pleasant if they ever feel like leaving early on a Friday.

“This is the reason we do what we do every day,” he said. “We just do whatever it takes to prevent another Silver Bridge from happening, because failure is not an option.”

Brown said he has a video of the Silver Bridge collapse and recovery operations. He said he has every new employee in his office watch it.

“I hope that will help them understand what this job is and to get it right and do it correctly,” he said.