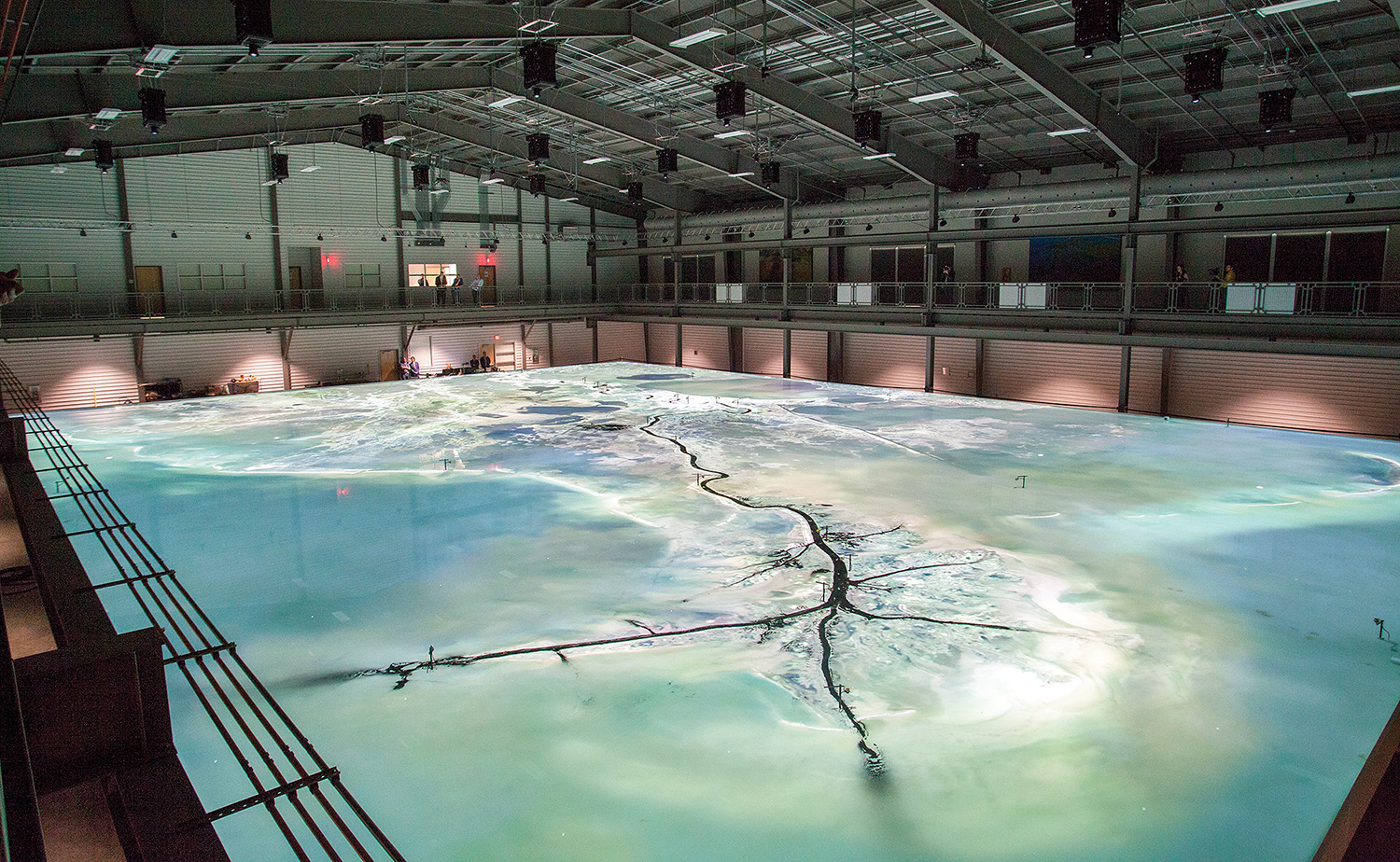 The model and, more broadly, the Center for River Studies will be used to model coastal restoration and protection efforts covered in the state’s $50 billion Coastal Master Plan, while also training LSU students.

“This center is an amazing tool,” said CPRA Chairman Johnny Bradberry at the ribbon-cutting ceremony. “It’s going to help us advocate for our coast and to showcase our work to protect and restore the precious asset we have. As others experience it, they too can become advocates, sharing what they’ve learned with others.”

The Center for River Studies is the third element of the sprawling LSU Water Campus to officially open. The CPRA headquarters, which houses some 150 researchers, planners and engineers, was the first. In December 2017, the Center for Coastal and Deltaic Solutions, home to The Water Institute of the Gulf, opened to the public.

Edwards praised the Center for River Studies for the role it will play in crafting and honing the Louisiana’s actions to turn the tide on coastal land loss. Since the 1930s, Louisiana has lost some 2,000 square miles of its coast, or on average the equivalent of about a football field every 38 minutes. The state’s Coastal Master Plan seeks to maximize the fresh water and sediment flowing down the Mississippi River in order to slow the rate of loss, and in some cases reverse it. But with so much already lost, and coastal erosion constantly taking place, the state has to act fast and maximize dollars spent.

“It’s going to bring together research and engineering to identify and hone solutions to protect and restore our coast,” Edwards said of the Center for River Studies. “The high-tech river model inside is a basketball court-sized classroom, and it’s going to do so much to enhance learning and make sure many people are exposed to this science.”

The riverbed at the heart of the model is routed into 216 high-density foam panels that measure 5 feet by 10 feet by 1 foot and weigh 700 pounds each. According to LSU, the entire model weighs as much as a loaded Boeing 737 jet. Ground plastic material simulates sediment flowing down the Mississippi River, with density and particle size designed to mimic Mississippi River sand. The model features 18 acoustic sensors that monitor water levels. According to LSU, those 18 acoustic sensors match the locations of similar stations along the actual Mississippi River.

Water-flows down the model can be adjusted to mirror seasonal and controlled floods, with one hour on the model equaling about a year’s worth of time on the river. Some 20 digital projectors are scattered across the model and are able to project the coastal landscape, including current and proposed physical structures, onto the otherwise white model of the river. In this way, the state will be able to model and estimate the effectiveness of coastal protection and restoration efforts, including proposed sediment diversions like the Mid-Barataria and Mid-Breton Sediment Diversions. CPRA and the state officials are working with Corps of Engineers and federal officials to fast-track those diversions through the permitting process in order to bring them online as soon as possible.

Edwards said an added benefit of the center is that coastal advocates and benefactors can come see the model rather than having to spend days to travel to hard-to-reach locations along the coast.

And while the river model will have immediate, tangible benefits for the state’s efforts to protect and restore the coast, Edwards said he’s encouraged by the impact the model—and the Water Campus in general—can have on future generations of Louisianans.

“I’m also excited that this building, what’s inside of it, is going to inspire children of Louisiana to want to be the next head of the CPRA, to go on to be a professor at LSU, and to teach these courses moving forward at the Water Institute for the Gulf,” Edwards said. “Because I can assure you, no matter what progress we make, we’re not going to solve these challenges in one generation.