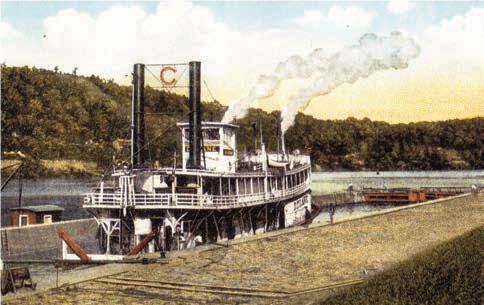 In last week’s Old Boat Column, we recounted the 1903 shoving contest between the sternwheeler D.T. Lane (first) and the propeller towboat James Rumsey. The D.T. Lane (1871–1908) towed coal on the Kanawha River, changing owners several times, and was rebuilt at the Coflin Marine Ways in 1880 in Covington, Ky. The Lane became something of a household name following the much-publicized event with the Rumsey, although it was never definitively determined who won the contest. The vessel was dismantled at Dana, W.Va., in 1908; the hull and cabin were later destroyed by fire.

This week, we delve into the history of the second vessel to bear the name.
The second D.T. Lane was built in 1908, also at Dana. Constructed on a wooden hull measuring 141.3 feet in length by 29 feet in width, the sternwheeler contained the recycled engines (16-inch cylinders with 5.5-foot stroke) from the first Lane. Those engines had originated from the sidewheel packet Ingomar, which had been built out of the Civil War gunboat General Thomas. Although both the first and second Lanes had pilothouses on the roof (not pool style), the second boat had its cabin cut off short forward.

The towboat was owned by Campbell’s Creek Coal Company and was named for entrepreneur David T. Lane, who had been involved in building the towboat Advance in 1862 at Franklin, Pa. Lane also had a steam yacht named Franklin at Lake Chautauqua, N.Y., which had been shipped to the lake by railroad. By 1903, Lane had built a second steam yacht named D.T. Lane for use on Findley Lake; it was moved to Lake Chautauqua in 1931 by a new owner and renamed Marilee, still having its original boiler as late as 1939. D.T. Lane manufactured oil well rods at Franklin, Pa., until his death at age 89 in 1915.

Capt. William Patrick was the longtime master of the towboat with Capt. Wesley Summerfield as pilot. According to Capt. Fred Way, nearly everybody employed at Campbell’s Creek worked on this vessel sooner or later. One of the more notable officers who served on the boat was Capt. Bill Patrick, described as being one of God’s noblemen; a quiet disposition, pipe-smoking, ruddy-faced, handsome, blue-eyed skipper and an even-keel pilot. Patrick was still making trips for Union Barge Line until his passing at age 81 in 1942.
The whistle of the D.T. Lane was a small two-toned affair with a high pitch; it also came from the first boat of the name and was used until part of it was lost overboard in 1926. The boat then utilized the “wildcat whistle” from the towboat J.T. Hatfield.

The Lane was retired in June of 1934 at Dana. The boat sank while laid up there, but was raised and languished for another year, never again operating; it was dismantled in the autumn of 1937.

For 66 years, there was a towboat named D.T. Lane on the Kanawha River.