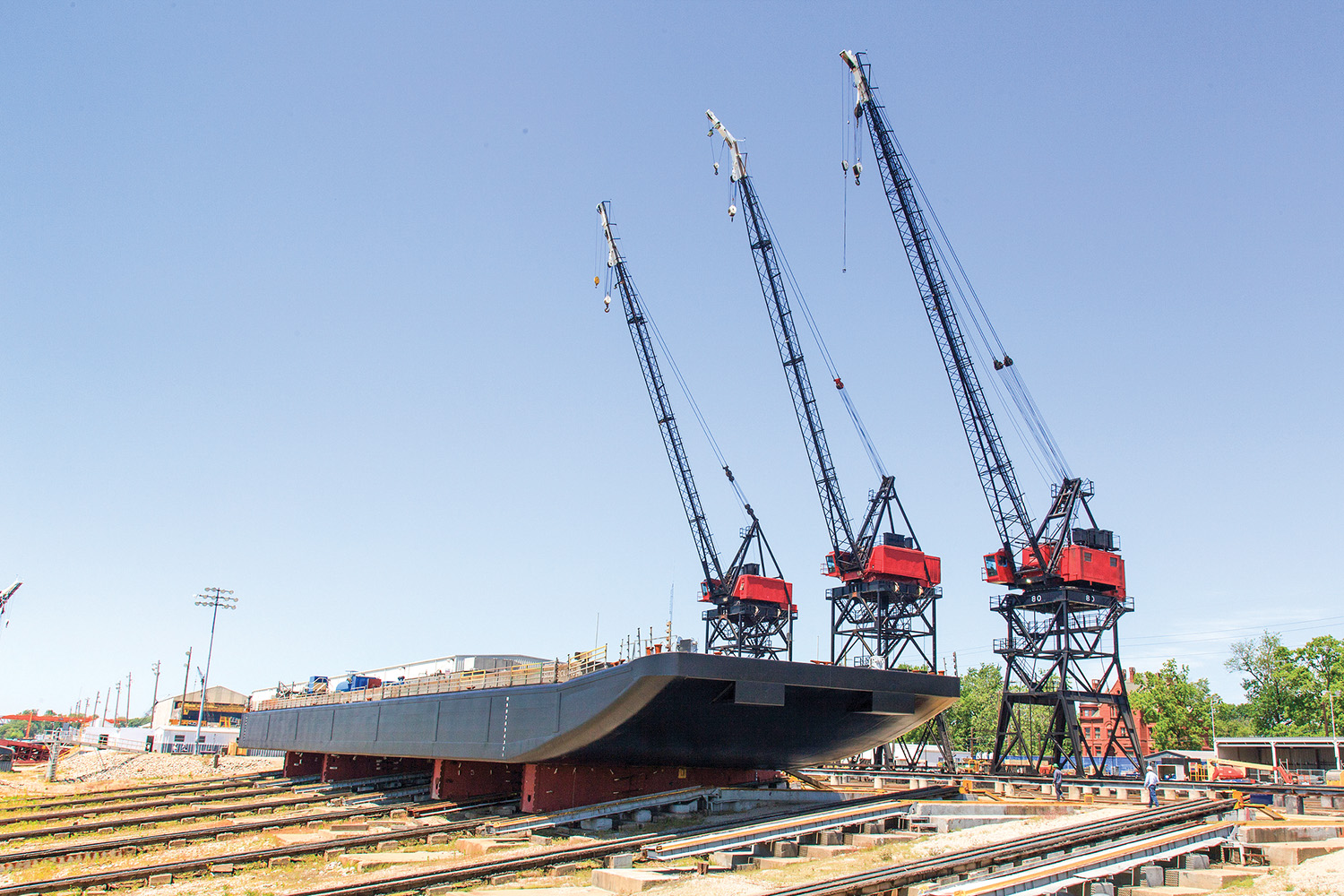 Jeffboat To Close Permanently By May 1

Jeffboat announced March 26 that it will cease operations when it completes current barge-building contracts by the end of April.

The closure marks the end of an 80-year history as Jeffboat, and more than 180 years of shipbuilding at the Jeffersonville, Ind., site, which was originally the Howard Shipyard & Dock Company.

In an interview with The Waterways Journal, Mark Knoy, president and CEO of Jeffboat and its affiliated company American Commercial Barge Line (ACBL), said the current economics of the barge industry simply don’t support keeping the shipyard open.

“There’s just an oversupply (of barges)” he said. “To get anybody to build barges, you’ve got to give them a real deal. Labor is by far the largest component in barge construction. We’ve been building barges for some period of time just to maintain the workforce in hopes that barge building would come back.

“Over the last few years, (the industry) built probably a lot more barges than we needed,” he continued. “There was cheap steel, there was cheap money, there was accelerated depreciation. We thought there was going to be a lot more growth in the liquid market. When you combine all of that with losing as much of the coal tonnage as we have, all of a sudden the fleet is out of balance on both the dry cargo and the liquid cargo side.”

According to ACBL’s estimates, Knoy said, “over the next five years, the number of barges needed to be constructed is going to be about half of what the current shipyard capacity (including Jeffboat) is.”

Meanwhile, to update and modernize the company’s equipment would cost an estimated $200 million, Knoy said. The current and foreseeable demand simply doesn’t support that kind of investment, he said.

Since 1938, Jeffboat has built 12,917 vessels, including hopper barges, tank barges, deck barges, drydocks, inland towboats and other specialty vessels.
Knoy said it was the tank-barge segment that kept the yard going the last few years.

“That’s what we have really concentrated on over the last five years, the tank-barge business,” he said. “Without that, we would have been shut down some time ago.”

“We built a lot of 30Ks (30,000-barrel tank barges), but when the market took a tumble in late 2015, we kind of realized that we were going to have a very difficult time moving forward, and we’ve been trying to look at all kinds of other alternatives.” Knoy said. “We looked at government contracting, we looked at building anything that’s a big metal square box for any kind of industry. Quite frankly, though, we would have had to have done a fair amount of retooling at the shipyard, which, again, just didn’t support that capital investment.”

The company had hoped for a resurgence of boat-building, particularly 6,000 hp. towboats, which Knoy called the “backbone of the industry.”

“But with the downturn in the industry over the last couple of years, nobody’s talking about spending that kind of capital,” he said.

Knoy said Jeffboat has had “a very supportive relationship” with the union representing shipyard workers, “but we just can’t find enough demand in the marketplace to build barges to move forward.”

Jeffboat issued two Worker Adjustment and Retraining Notification Act (WARN) notices of pending layoffs, on November 1, 2017, and February 1, 2018. The shipyard’s workforce today is about 220 workers, down from a high of 1,300 just a few years ago.

The company is finishing construction of four barges: one tank barge for Florida Marine Transporters, and three hopper barges for Coeymans Marine Towing of New York. Depending on weather, those projects should be completed by about the third week of April, Knoy said. After that, the company will look for the best alternative uses for the riverfront property currently occupied by the shipyard.

He added that the company has received offers of support from the industry. “This is what was the most heartwarming,” he said. “Many former customers of Jeffboat called up and said, ‘Hey, I’ll build 10 or 20 barges if that will help.’ It would have helped, but it’s not enough to change the decision,” Knoy said. “You need that on an ongoing basis, and for us to invest capital down there, we need to be able to say yeah, it looks like we’ll build barges for the next five years, and we just couldn’t get comfortable doing that.”

Despite the demise of Jeffboat, the transportation segment of the company is doing well, Knoy said. “It’s still business as usual at ACBL,” he said.

The closure of Jeffboat is the end of an era, Knoy said. “Jeffboat was probably one of the most prominently known trade names in the industry over the last 80 years. I think Jeffboat defined our industry to some degree. It was one of those that ‘took a licking and kept on ticking’ companies, and built many, many vessels that are still out there carrying cargo around today.

“I do think it’s one of those marquee names in the industry that appears to be gone forever, and it’s a sad day.”