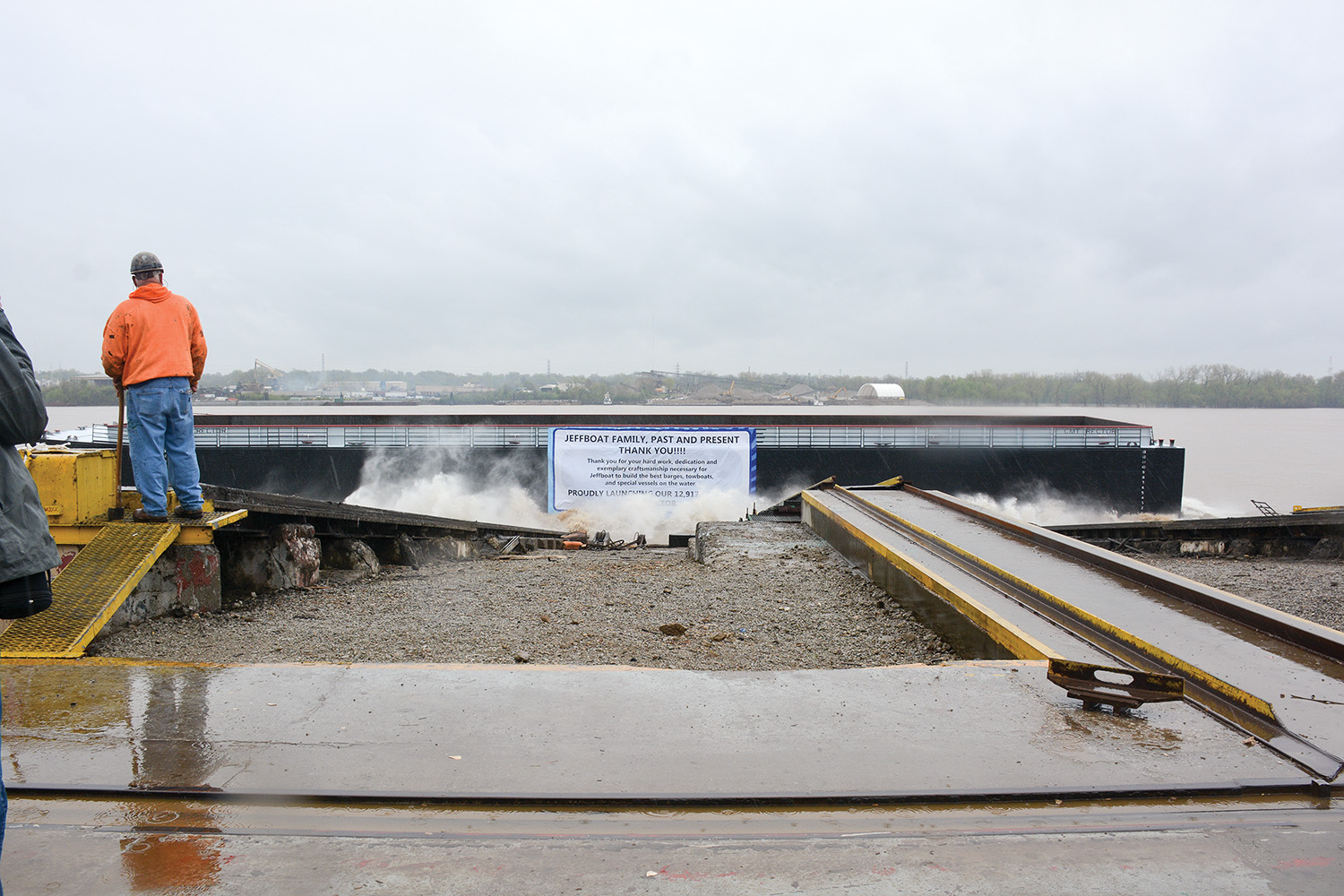 The 12,917th—and final—vessel to be built at Jeffboat slid down the ways and splashed into the Ohio River on April 23, marking the end of a 180-year-old tradition of shipbuilding on the site.

The last vessel was a hopper barge for Coeymans Marine Towing of New York.

The shipyard marked the occasion with a ceremony held on an appropriately gloomy day. Shipyard workers and their families were invited to participate in the commemoration.

The Coeymans barge was the 23rd vessel built by Jeffboat in the four months of this year—a construction rate far lower than what was needed to sustain the shipyard, company officials said. In a March 28 interview with The Waterways Journal, Mark Knoy, president and CEO of Jeffboat and its affiliated company American Commercial Barge Line (ACBL), said the yard needs to build the equivalent of about 250 barges a year to stay competitive. The yard has not reached that level since 2012, when it cranked out 263 hopper barges and 37 tank barges. Last year, only 107 vessels slid down the Jeffboat ways: 105 barges and two towboats.

The shipyard suspended construction once before, during the industrywide recession of the 1980s. Construction resumed in 1989, however, and the yard saw a number of strong years after that.

This time, though, the closure is permanent, Knoy said. Company officials are actively seeking a buyer for the property.

There is currently an oversupply of barges that is expected to last for at least five years, he said, and the company can’t afford to try to maintain production capacity during that time—particularly because to modernize the shipbuilding facility would cost upwards of $200 million.

In 1834, James Howard founded the Howard Shipyard on the banks of the Ohio River in Jeffersonville. The yard was one of the pre-eminent shipbuilding facilities during the steamboat era, building some of the most iconic vessels of the 19th century.

In 1938, during the Great Depression, American Barge Line purchased the Sweeney Shipyard, adjacent to the Howard yard, and named it the Jeffersonville Boat & Machine Company, later shortened to Jeffboat. With the advent of World War II, Jeffboat built submarine chasers and landing ship tanks for the U.S. Navy, which purchased the then-vacant Howard yard to expand the operation. Following the war, Jeffboat took over operations again, and turned the enlarged shipyard’s focus to building inland barges and towboats.

The 1980s brought a lull in both the barge industry and at Jeffboat; only 1,466 vessels were produced that decade. But shipbuilding came back in the 1990s, when 2,629 vessels slid down the ways, followed by 2,526 in the first decade of the new century.

But with a glut of barges now operating and newer, more modern shipyards available to produce barges, Jeffboat announced March 26 that it would close for good when its current contracts were completed. Those contracts included one tank barge for Florida Marine Transporters and three hoppers for Coeymans.

A sign on the last barge as it was launched read: “Jeffboat Family, Past And Present, Thank You!!!! Thank you for your hard work, dedication and exemplary craftsmanship necessary for Jeffboat to build the best barges, towboats and special vessels on the water. Proudly launching our 12,917th vessel, CMT RECTOR.”

Below is a slideshow with more photos from the ceremony commemorating the final barge launch. The photos were taken by Kathey Freeman, courtesy of American Commercial Barge Line. 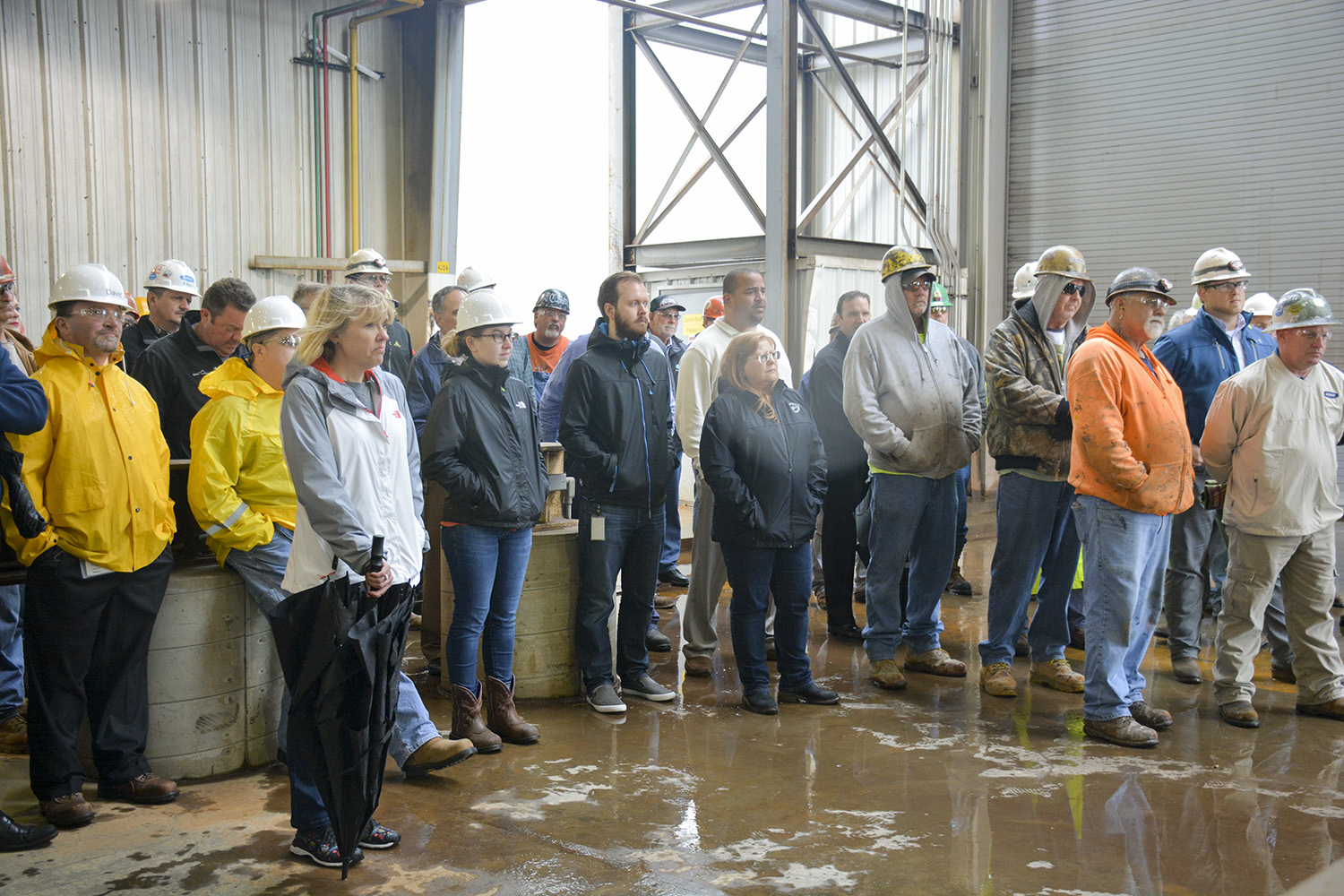 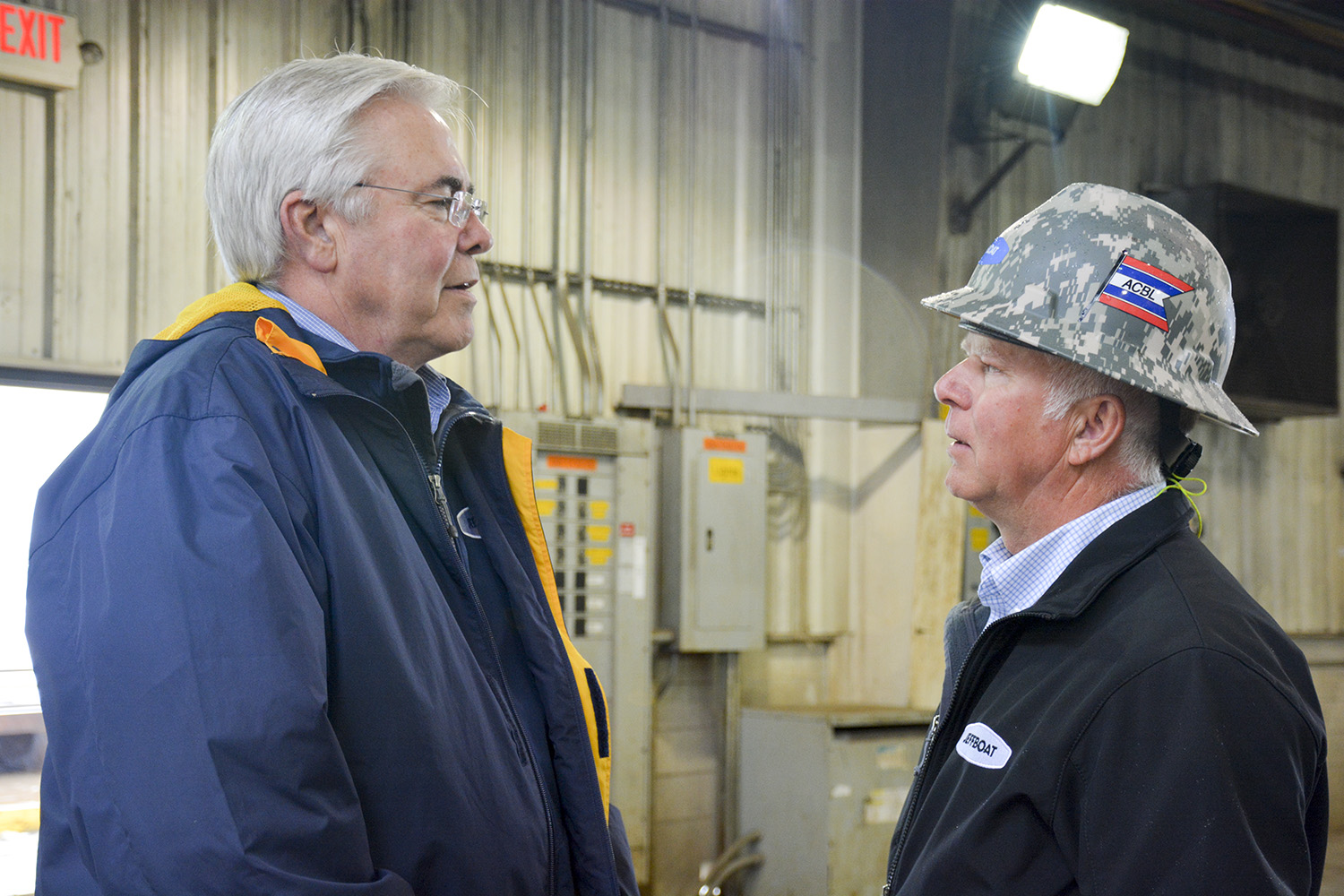 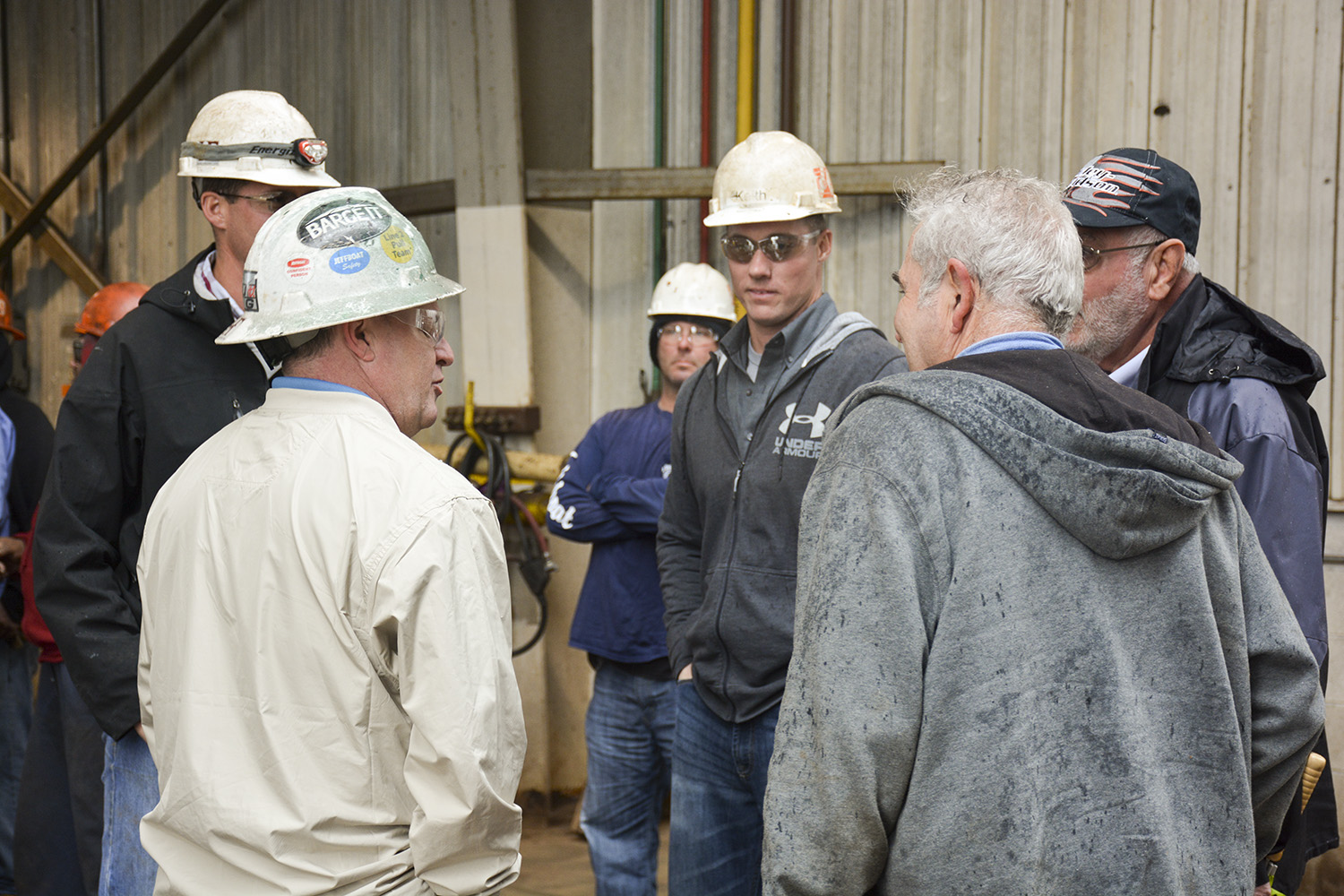 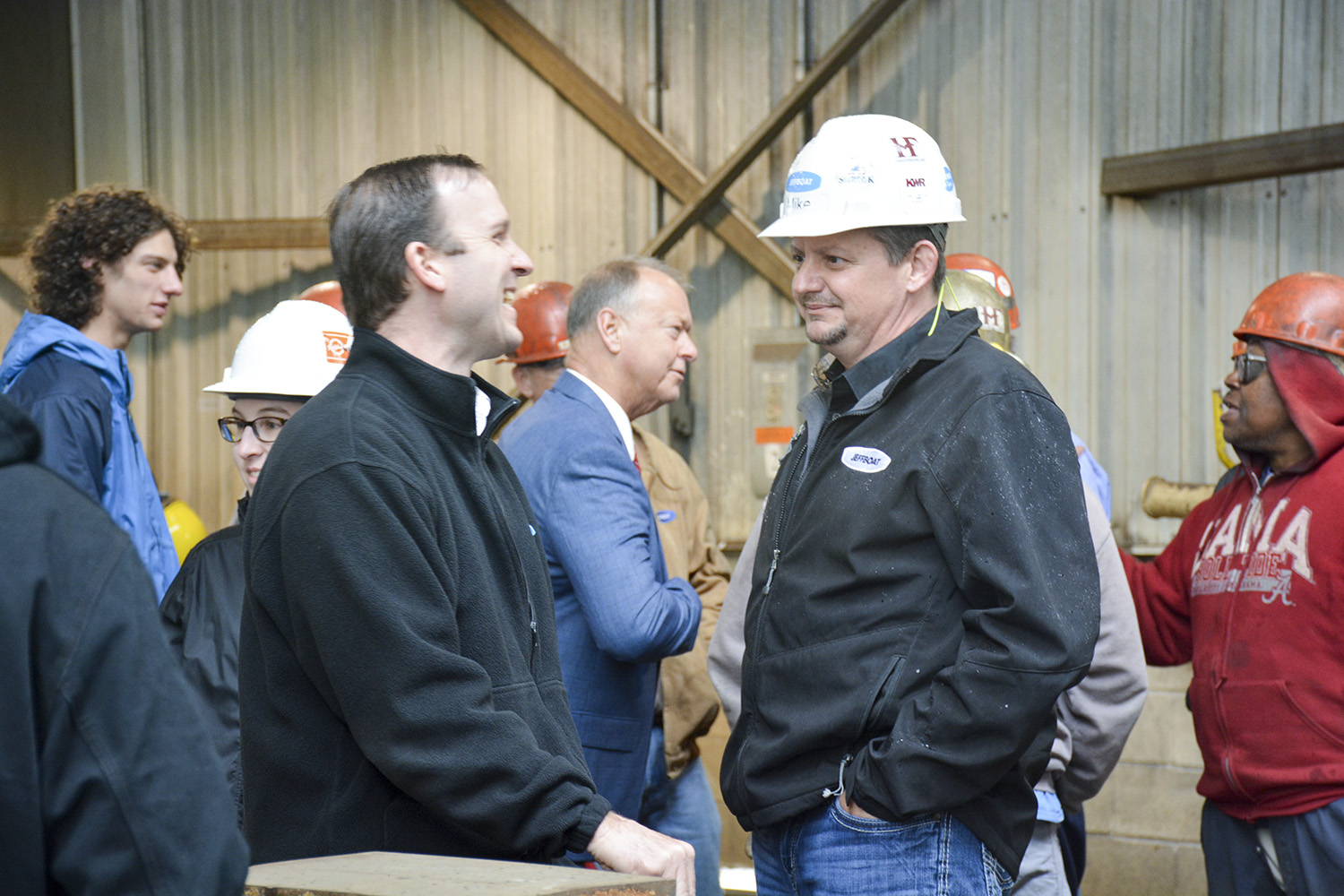 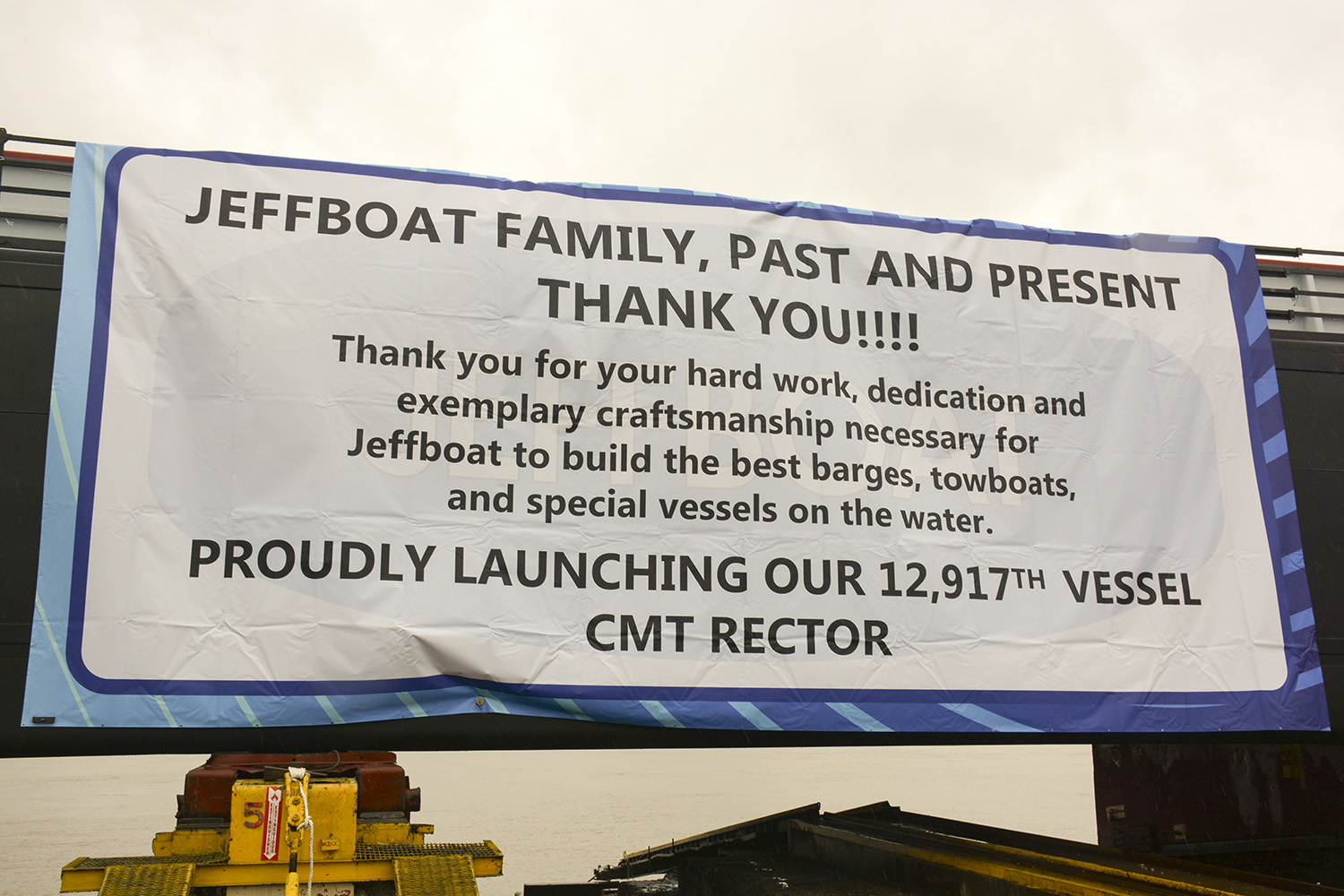 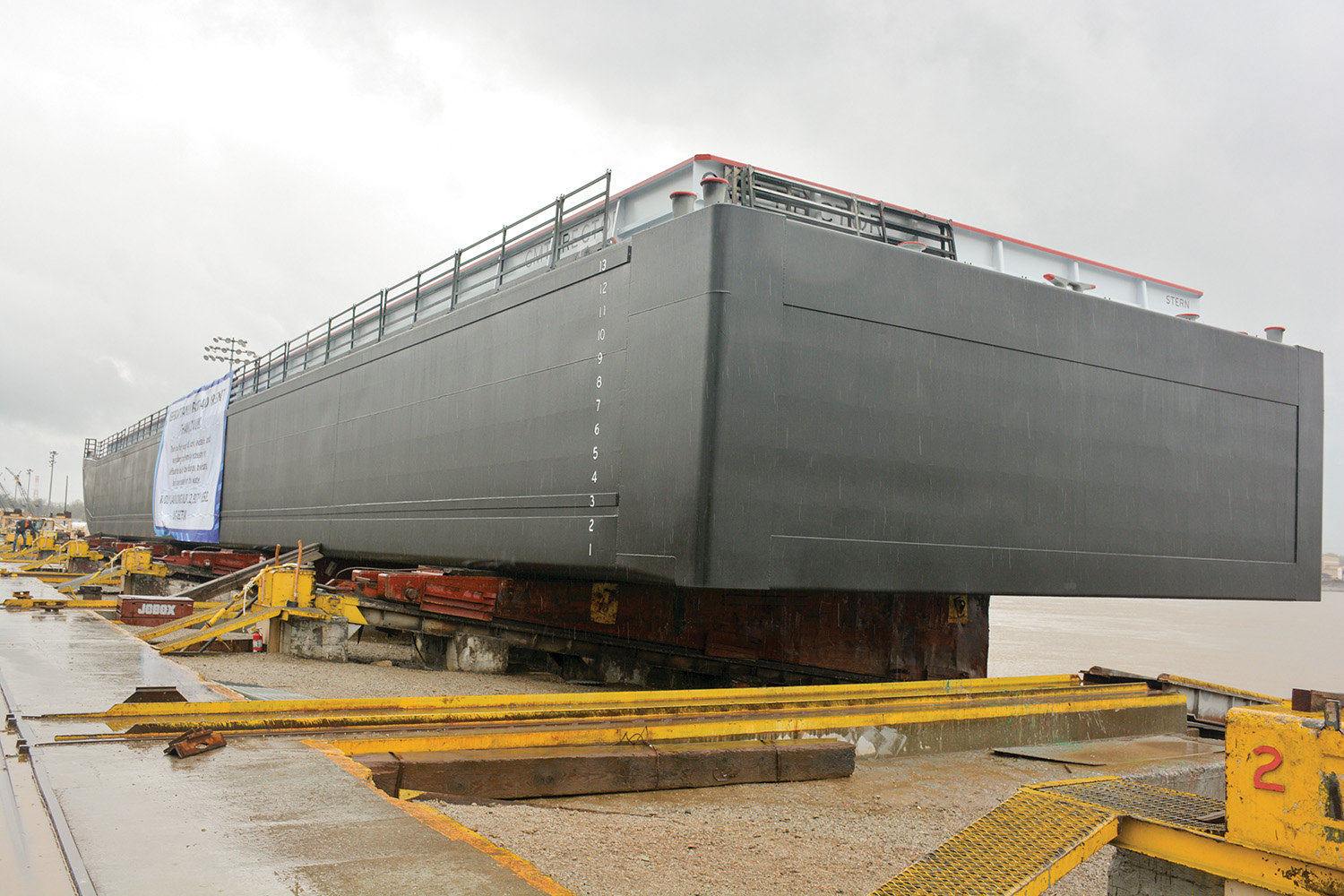 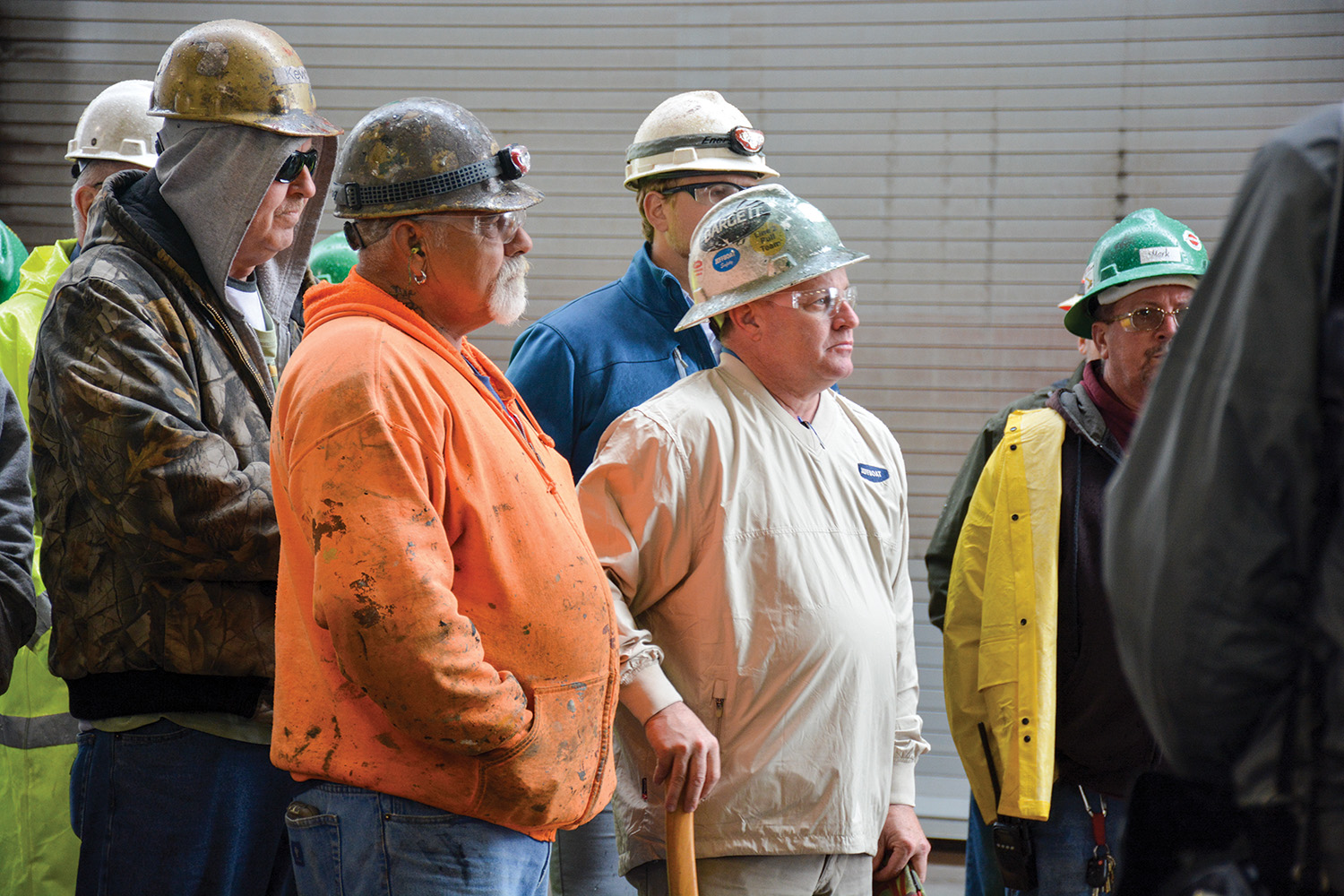 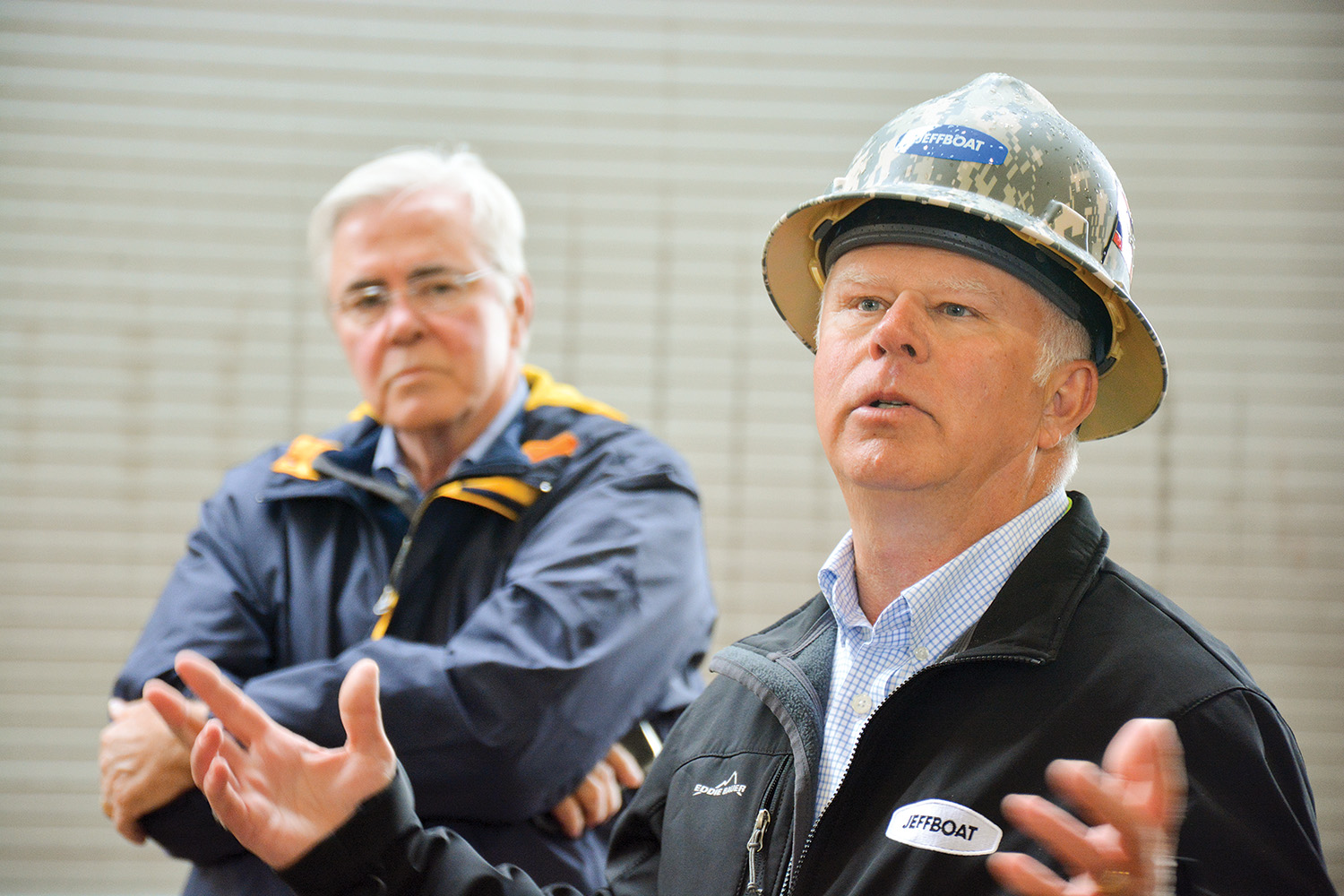 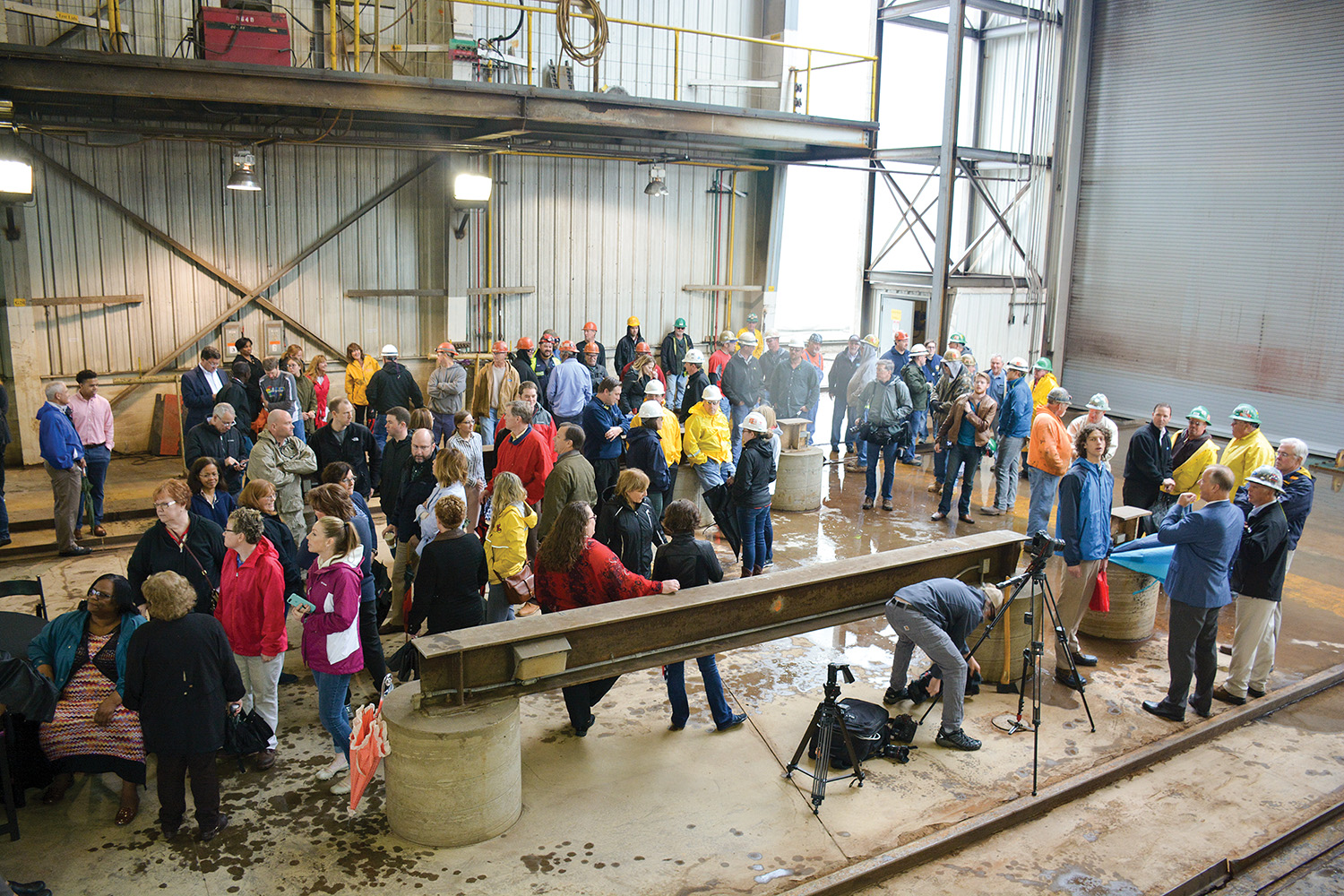 <
►
>
The final barge to be built at Jeffboat splashes into the Ohio River;