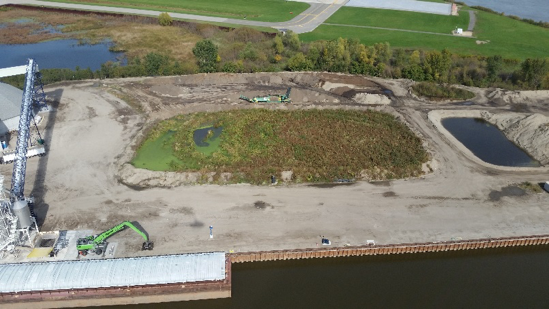 Beneficial Use in the Illinois River Valley: Manufacturing Soil from Dredged Material

On March 19, the Great Lakes Dredging Team hosted a webinar with Chuck Theiling from the U.S. Army Corps of Engineers Engineer Research and Development Center (ERDC) to discuss methods and current projects for manufacturing custom soil blends from dredged sand.

The presentation, Beneficial Use of Dredged Material: Can Soil Sales Save Peoria Lake?, looked at number of projects in the Illinois River Valley area – planning beneficial use of dredged material for Peoria Lake and the Mackinaw River for ecosystem restoration and commercial soil manufacturing. He has also done work near Beardstown, Illinois, using material from the Sangamon River and the Sanganois Conservation Area; and at Bull’s Island, near Ottawa, Illinois.

Sediment Formation and Challenges
Theiling, a research ecologist, is new to his post at ERDC, having spent many years at the Rock Island District as a biologist, where he first got involved with beneficial use investigations. In helping the dredging team do its planning, he noticed there wasn’t a large focus on beneficial use, or moving sediment very far from where it came from.

“We end up with large stockpiles of sediment along the river,” Theiling said. In the Illinois River Valley, the root of sediment issues is glacial outwash, he said. “We are a glacial environment, and we have glacial till forever and forever.” Outwash events in the Upper Great Lakes region, where glacial ice dams formed, brought sediment all down the river, when the dams broke 18,000 years ago. This sediment flow carved the Illinois River and Kankakee River channels, leaving glacial till moraines and the rivers cutting through them.

Theiling said, in terms of the Corps navigation mission, problems arise at the mouth of the tributaries where the low gradient river doesn’t have enough velocity to move all the sand. At one of his first beneficial use projects along the Mackinaw River, the Corps has notoriously large stockpiles of sand, more than 1 million cubic yards. As with many places along the Great Lakes and the Mississippi River, the Corps is running out of places to store this sediment.

“All this chronic outwash is going to be a problem for navigation and ecosystem missions for a long time. So how will we adapt our activities?” Theiling asked. The Corps has studied the system extensively. It knows that the heavy sands are transported along the main channel with the fines being delivered to the backwaters, where they cause a lot of sediment issues. “We’re spending lots of money to manage these sediments, independent of each other,” Theiling said.

Traditional Corps planning is reach-based, meaning sediment is generally removed and managed within a certain range – a reach being the extension of a tributary from the main channel with its own characteristic sediment transport issues. Beneficial uses of dredged material and developing commercial soil manufacturing might require moving sediment farther. It will also require assistance and more organizations among Corps districts and its projects (operations and ecosystem restoration) and other private and government partners.

The Minnesota Model
However, Theiling sees great potential in these shortcomings and problems for the Illinois River Valley. Some years ago, he heard about an operation called Minnesota Mulch & Soil, run by a man named Marty Long. He stored this information from a casual conversation with the operations chief at the St. Paul District, who told Theiling about a guy that makes dirt out of manure and sand with the University of Minnesota. When the Rock Island District started running into issues with managing its sediment, Theiling remembered the Minnesota operation. “Why don’t we make dirt out it. There’s a guy in

Minnesota blending it,” he said.

Marty Long and Minnesota Mulch & Soil helped start what Theiling calls “the Minnesota Model,” a partnership with the University of Minnesota and the Minnesota Department of Transportation (MNDOT) that manufactures soil from dredged material, other sediment, and municipal compost.
The Minnesota Pollution Control Agency ordered MNDOT to reduce runoff along highways in order to improve stream hydrology. Increased runoff along highways was causing erosion in Minnesota streams, which was filling Lake Pepin, 60 miles downstream from St. Paul.

In the past, Theiling said MNDOT would use material from the side of the road and what was locally available. When farmers decided that they didn’t want to give up their soil anymore, MNDOT started using sub quality material where they could find it. When push came to shove, they realized, instead, that better material could get a lot more filtration on the shoulder and ditches, and this soil could be made economically in partnership with Minnesota Mulch & Soil and the University of Minnesota.

“They’ve been doing it a long time,” Theiling said, “from roadside to all sorts of stormwater applications and brownfield remediation. The bioremediation property of compost is remarkable. It can get very scientific, yet at its roots, it’s very basic.” The mixture needs a certain amount of sand and silt, native soil, some nutrients (manure or municipal biosolids) all blended together. The backwaters of the Illinois River are full of silt, sand, clay and highly organic peat from former wetlands.

In addition to highway construction, stormwater management and brownfields, manufactured soil has other uses including construction applications, rain gardens, ecosystem restoration, contaminants recycling and water recycling.
Highways are currently the biggest users of manufactured soil, Theiling said. “I think stormwater management is our future. If you look at the benefit of taking the sediment and putting it upland where it can capture the water, it just makes sense to do it that way,” he said. Ecosystem restoration and island building could also benefit from this manufactured soil. “We can make it better for revegetation,” Theiling said.

Illinois River Beneficial Use Projects
Theiling has been working on a number of beneficial use projects, started at the Rock Island District and now through ERDC, exploring the manufacturing of soil, first in Beardstown, Illinois in 2015. The next year, he did planning on the Mackinaw River, and last year, he started work in Ottawa, Illinois.

In the Illinois River at Bull Island, the river flow splits around the island, and the drop in energy causes sand to drop out. The Corps dredges around 20,000 cubic yards there every year. Current stockpiles are nearly full, so where will that sediment go for the next 20 to 40 years? Theiling thinks it should go to Chicago. “Chicago as a market and Chicago as a resource,” he said. He is talking with the Illinois Tollway, who has been very receptive to the conversation and a possible partnership. That would be one large, prominent market. As a resource, the Chicago Metropolitan Water Reclamation District has organic material resources for the mix. Theiling said Illinois Tollway has also done some of the regulatory work on Chicago confined disposal facility material and municipal biosolids.

Most recently, Theiling’s work at ERDC has taken him to Peoria Lake. In March,  the Tri-County Regional Planning Commission turned in a proposal under the Water Resources Development Act of 2016, Section 1122, Beneficial Use of Dredged Material. It would provide for several research projects over the next few years. Corps Headquarters is expected to make a decision on those projects in June.

Theiling has received minimal funding along the way for researching these beneficial use projects, but this would be a big step toward making manufactured soil from dredged material a reality for the region.

Originally, Peoria Lake was a seasonal lake and wetland, depending on the river and flood stage. River levels would rise and fall in a seasonal “flood pulse” that inundated backwater lakes and floodplains at high river stages and isolated lakes and ponds and dried floodplains. Deeper backwaters retained water and fish populations, and might even remain connected to the river. The seasonal wetting and drying, and wetland plant colonization, helped hold sediment in place.

In 1938 to 1939, the modern Peoria Lake was formed with the installation of the Peoria Dam, maintaining a 9-foot navigation channel across the entire floodplain. Theiling said that fine sediment from an agricultural landscape filled the lake over time, though it remained suspended and moved out of the channel to the lake, filling the deeper parts first. Eventually, the sediment filled across the lake, making the waterbody a platter shape, similar to other Illinois River backwaters. This stopped the wetting and drying process and wetland plant formation. “The loss of seasonal flooding and excessive sedimentation in a glacial basin, combined with the low gradient river make it a sediment trap,” Theiling said.

“We would like to harvest sediment in a manner that creates and protects habitat. We need a mix of materials for building islands in the lake and exporting to market to pay for the dredging,” he said.

Some questions remain about the economical viability of the concept, Theiling said. The work needs local markets and local partners, but if done correctly, the price is right for commercial profit.

The Section 1122 project is crucial to do the necessary research for the Peoria Lake project, and necessary in helping to bring the private sector into the process, Theiling said.

Touch It Once
The target for soil manufacturing and sale is 1 cent per pound. Theiling said the soil does require a local market. It doesn’t make sense to ship it long distances. He learned from Marty Long, along the way, touch it once. It’s not economical to move the sediment more than once or transport it too far. The Corps often moves sediment to intermediary storage areas. This can quickly make beneficial use soil production too expensive.
However, with the right partners, Minnesota has shown how soil manufacturing can work. Minnesota Mulch & Soil also has set it sites on Wabasha, Minnesota, one of the biggest problem areas for sediment, around 270,000 cubic yards per year and marketing it to Minnesota and Wisconsin. “Marty has found the Wisconsin market is big and underdeveloped. We can provide a better material at a better price than what they can find locally,” Theiling said.

When Theiling first asking for funding and proposed his research on soil manufacturing, he was told it wasn’t viable research, with all the necessary soil science already available. After some temporary disappointment and frustration, Theiling realized the success of these projects and acquiring the needed partners for manufacturing soil was a marketing issue. He needed to find the right markets and market the idea to the right partners.
Dredged material, municipal tree waste, agricultural by-products, manure and backwater sediments, all of these have management costs from their associated industries. “If we blend them all together into a soil blend, we should be able to reduce their management costs and recycle the material into a marketable, valuable product,” Theiling said.

Editor’s note: this article was based on information from Theiling’s presentation and interviews done after the event. To view the webinar presentation, visit greatlakedredge.net.