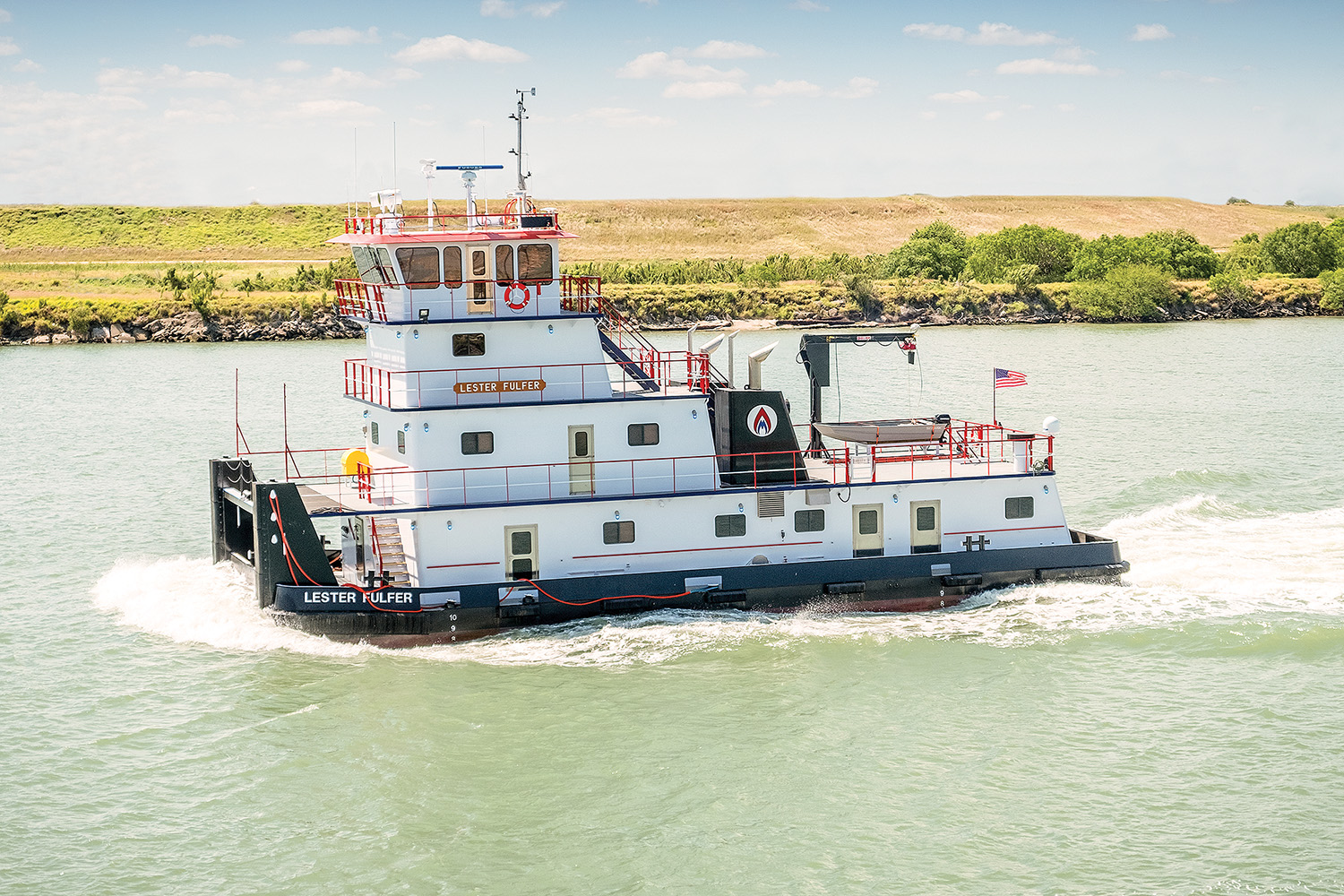 On a quintessential spring day on the Gulf Coast late last month, Martin Marine employees, customers, vendors, friends and family members gathered in Galveston, Texas, to celebrate the christening of the mv. Lester Fulfer and the lasting impact the vessel’s namesake made on Martin Marine, a division of Martin Midstream Partners LP.

John Bludworth Shipyard in Corpus Christi, Texas, built the mv. Lester Fulfer, which measures 84 feet by 32 feet with a depth of 11 feet. The vessel is a John L. Bludworth III design and was the 57th inland towboat built at the yard.

Rick Freed, vice president of Martin Marine, said the decision to add a John Bludworth Shipyard vessel to Martin’s fleet was an easy one.

“I can tell you, the list of viable shipyards is large throughout the Gulf Coast, and John Bludworth Shipyard continued to rise to the top in several different categories,” Freed said, speaking at the April 26 christening. “Versatility, quality workmanship, reliable engineering systems, electronics, horsepower, comfort, and without a doubt, the solid leadership team put together by [John Bludworth Shipyard President] Gasper D’Anna.”

Freed applauded D’Anna and the John Bludworth Shipyard team for their effort from start to finish despite weather interruptions, which included Hurricane Harvey.

“Gasper, I can’t thank you enough for the dedication your team displayed during construction,” Freed said, later adding, “I know you had some inclement weather, and you still pulled it off. Gasper, you handled every situation as if the vessel was going to be yours.”

D’Anna, in turn, reflected that thanks back to Freed and the Martin Marine team.

“I know we fulfilled the need for horsepower, and I’m grateful we’re establishing a good business relationship,” D’Anna said.

D’Anna described for the crowd how John Bludworth Shipyard has been on a tear for the last 18 to 20 years, growing from 15 to around 125 employees and moving into the inland towboat market.

“John Bludworth Shipyard has been building pushboats for the last 18 years, and we are now working on our 59th and 60th boats,” D’Anna said. “Again, like Rick mentioned earlier, projects like these could not be completed without a concerted effort, not only by our shipyard employees but by our key suppliers and contractors.”

The mv. Lester Fulfer offers four total staterooms with room for six crew members. Steersmen enjoy a wheelhouse eye level of 34 feet; the vessel has an air draft of 41 feet with the mast lowered and 49.5 feet with the mast raised.

In addition to the technical features of the vessel, the mv. Lester Fulfer also stands out due to its finishing touches. The vessel features a well-equipped and open galley, wood grain flooring, ample staterooms and an expansive wheelhouse. It also has plenty of personal touches, including a mounted deer head hanging in the galley area. The deer comes from Capt. Homer Barrett’s land in East Texas, where he used to hunt with his father years ago.

Besides the design and technical aspects of the vessel, what truly distinguishes the newest member of the Martin Marine fleet is the vessel’s namesake: Lester Fulfer.

Fulfer retired from Martin Marine last year after 20 years with the company and 24 years before that with Barge Transport, which Martin acquired.

Fulfer said he started out as a mechanic for a Port Arthur, Texas-based engine service company.

“I was working out at one of the shipyards, and one of the managers for Barge Transport made my acquaintance and said he wanted me to start working for them,” Fulfer said.

Then, 24 years later, when Martin acquired Barge Transport, Fulfer stayed on with the new company. And Freed made it clear that Martin was better for it.

“Without your consistent—and I mean consistent—dedication and persistence—and I mean persistence and in the HSE world you have to be persistent—Martin Marine would not have been as successful as it is today,” Freed said.

“‘When Lester bends your ear, listen carefully, because he will make your life easier as vice president,’” Freed recalled Grimm telling him. “And you did.”

Freed praised Fulfer for always anticipating problems and displaying a singular knowledge, wisdom, dedication and attention to detail. Freed also reminded the crowd of one word Fulfer always warned against.

“There’s one word most of us know that Lester called a cuss word,” Freed said. “That cuss word was what, Lester? ‘Assume.’ Let me tell you, Lester would always say, ‘Don’t assume anything in our industry.’ I think that goes for any business.”

Freed concluded with an expression of thanks and congratulations to Fulfer: “We’re extremely honored to continue with your name on this vessel. Martin will never forget you.”

The Rev. Thomas Rhoades, river chaplain with The Seaman’s Church Institute, then reflected on the historical and pastoral foundations of christening ceremonies. Rhoades said christenings are, ultimately, a service of dedication.

“Christening the mv. Lester Fulfer is a claim of a belief that God is with us in all places, and in particular aboard this beautiful pushboat,” Rhoades said. “Whenever we step on its deck, it has been sanctified as a place for God’s presence. God is with us. That is proclaimed when the bottle is broken.”

Rhoades also presented the ship’s Bible and the flag of the U.S. Merchant Marine to Barrett.

Following a prayer, Fulfer and his family boarded the mv. Lester Fulfter. His wife of nearly 48 years, Lynette Fulfer, then shattered a bottle of champagne over the rail of the mv. Lester Fulfer, officially christening it into the Martin Marine fleet.

Below are more photographs from the christening ceremony. 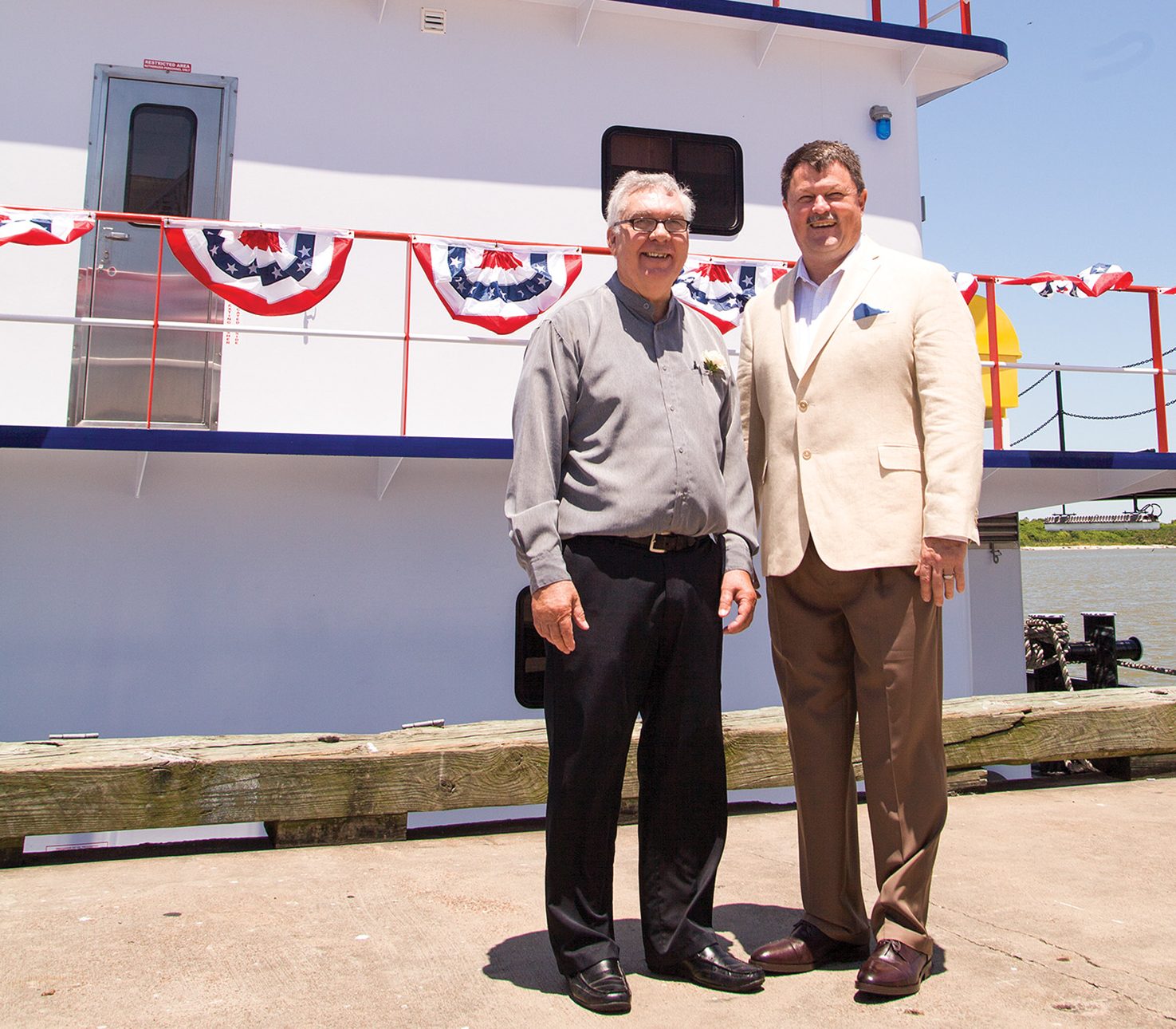 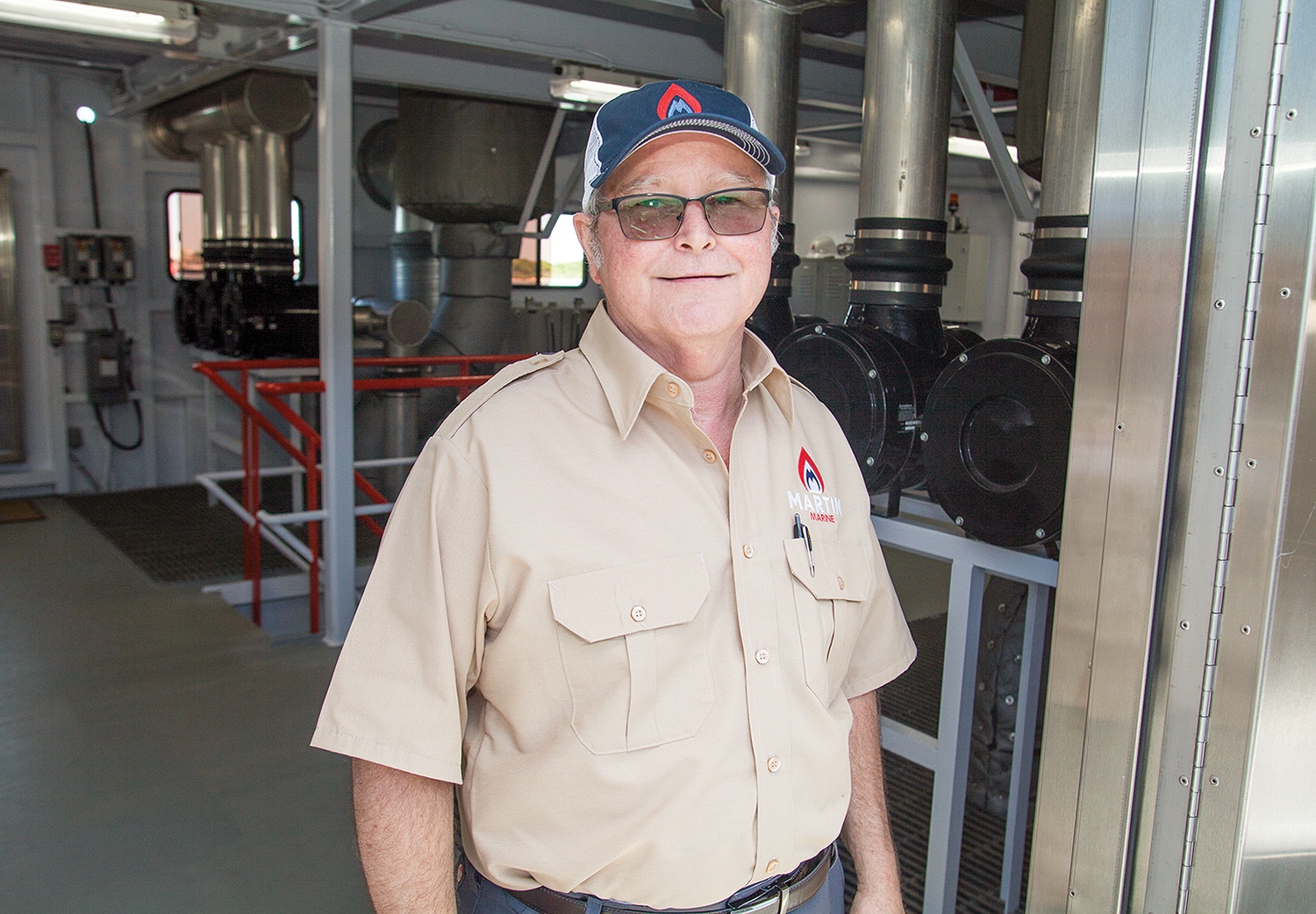 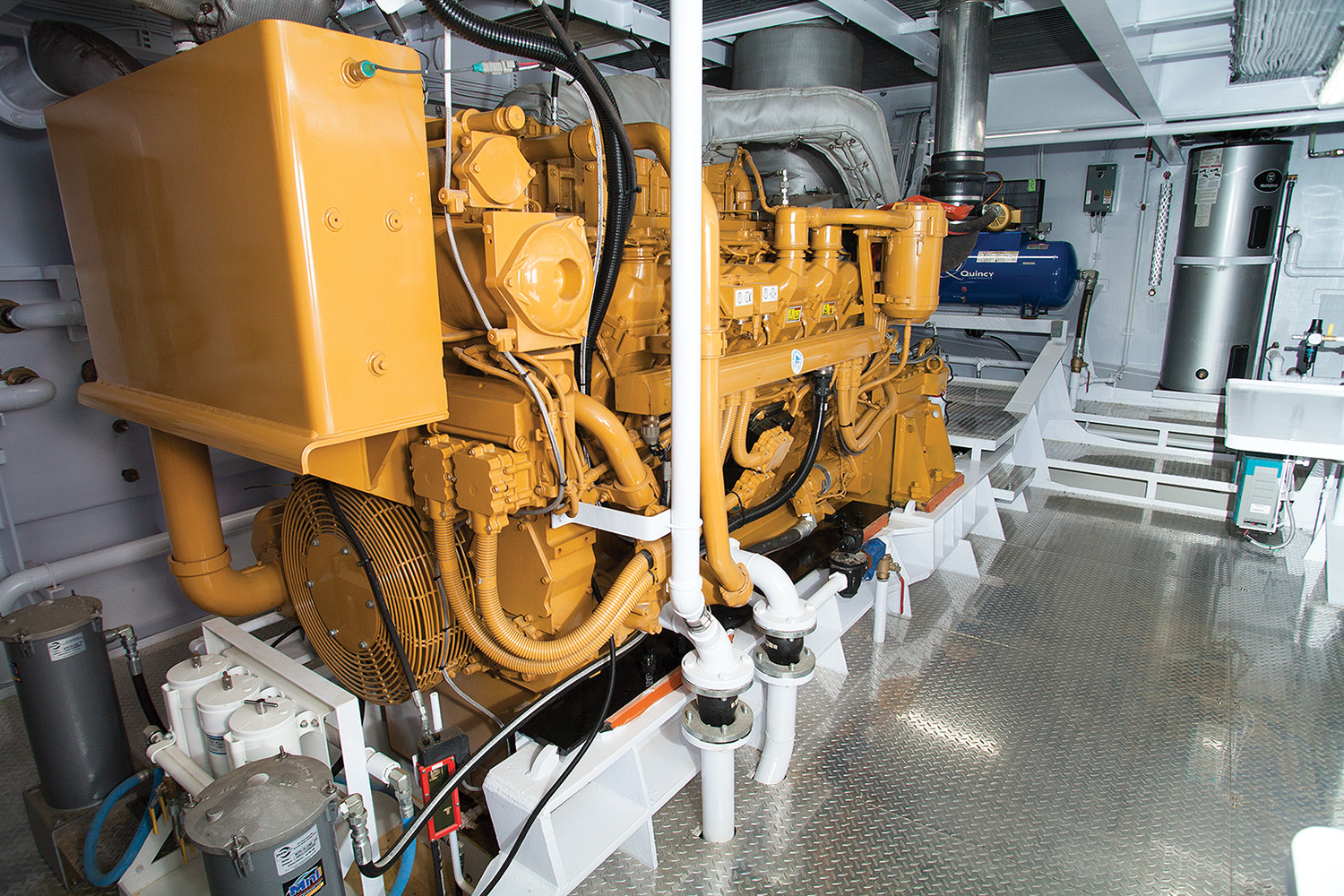 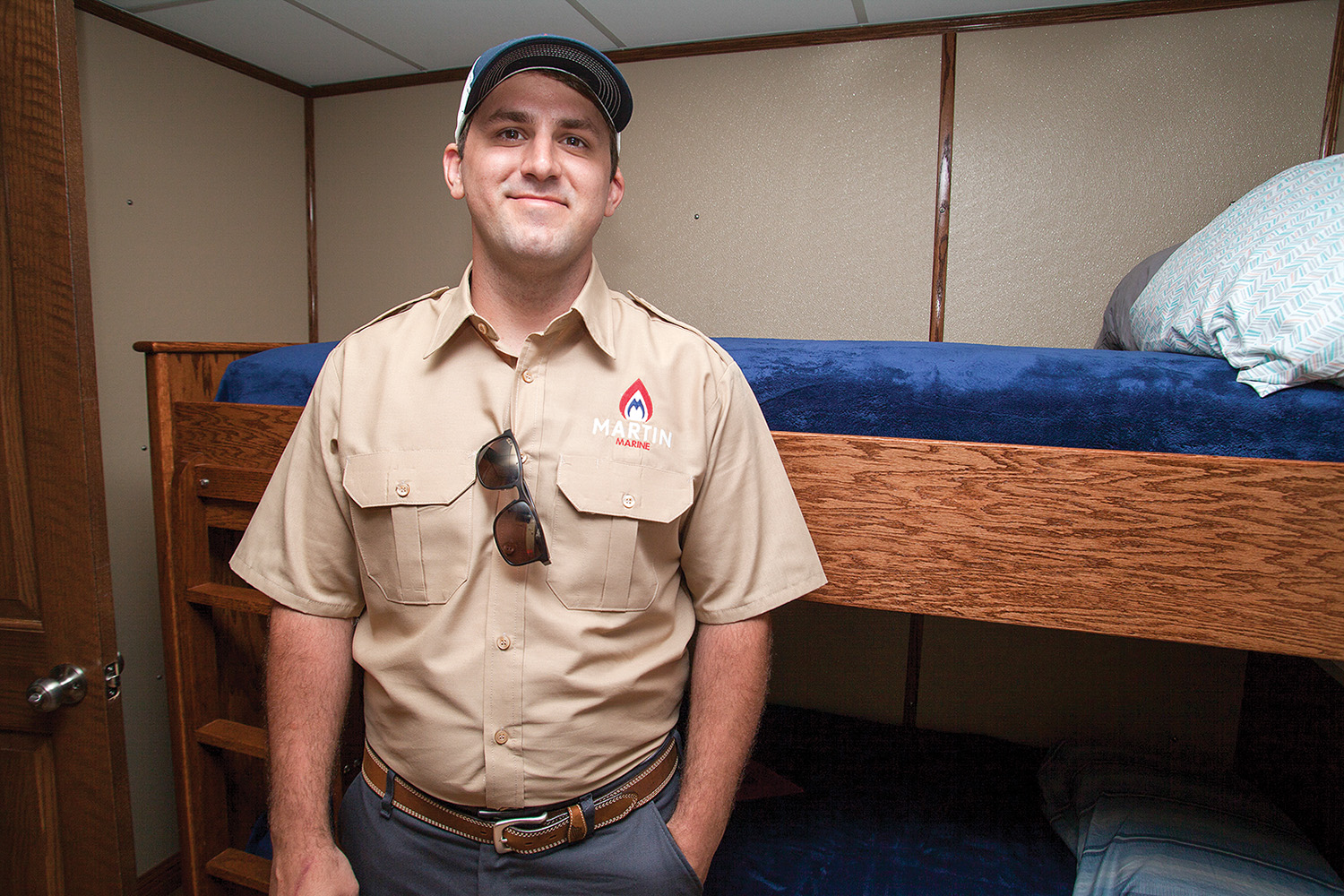 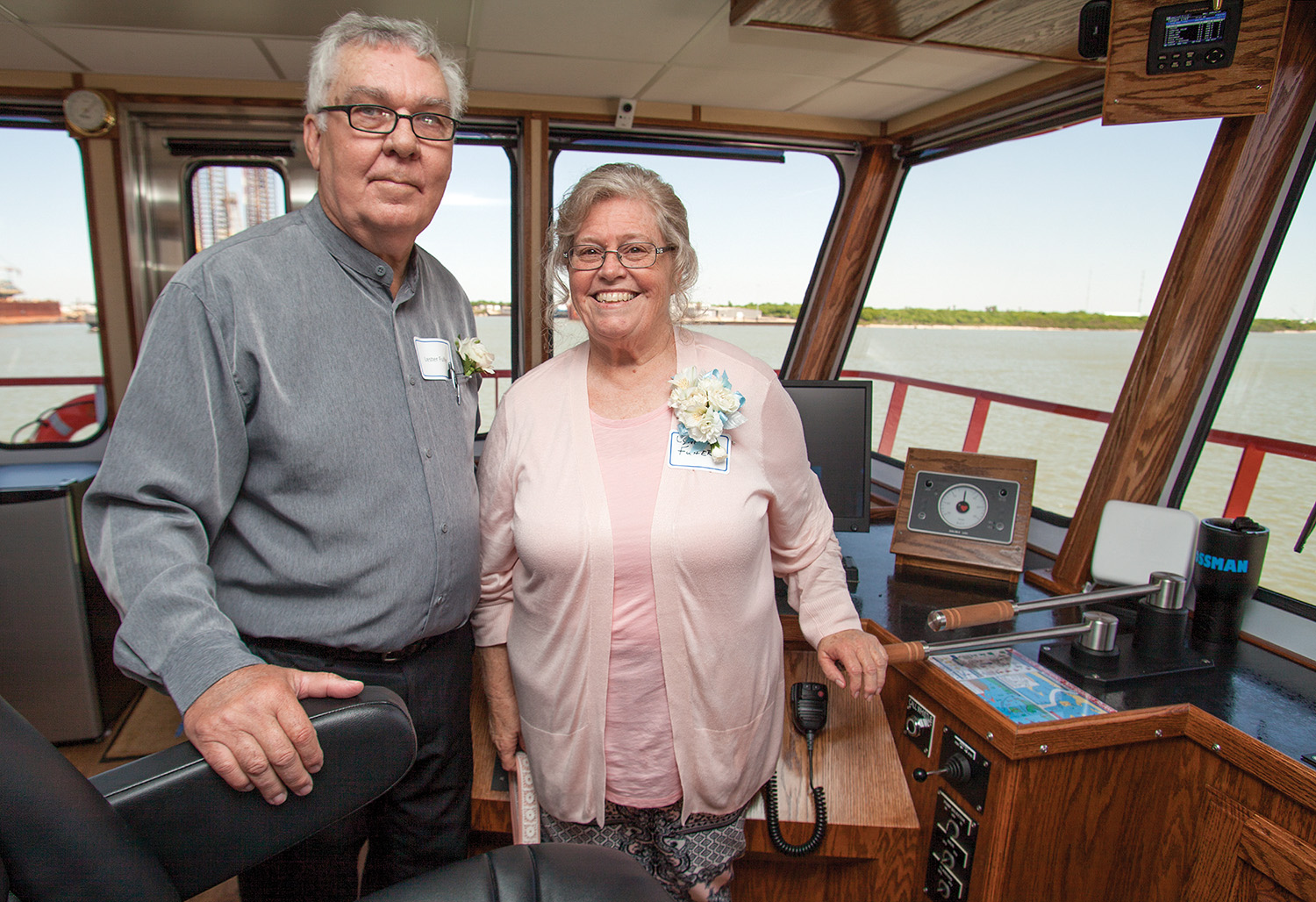 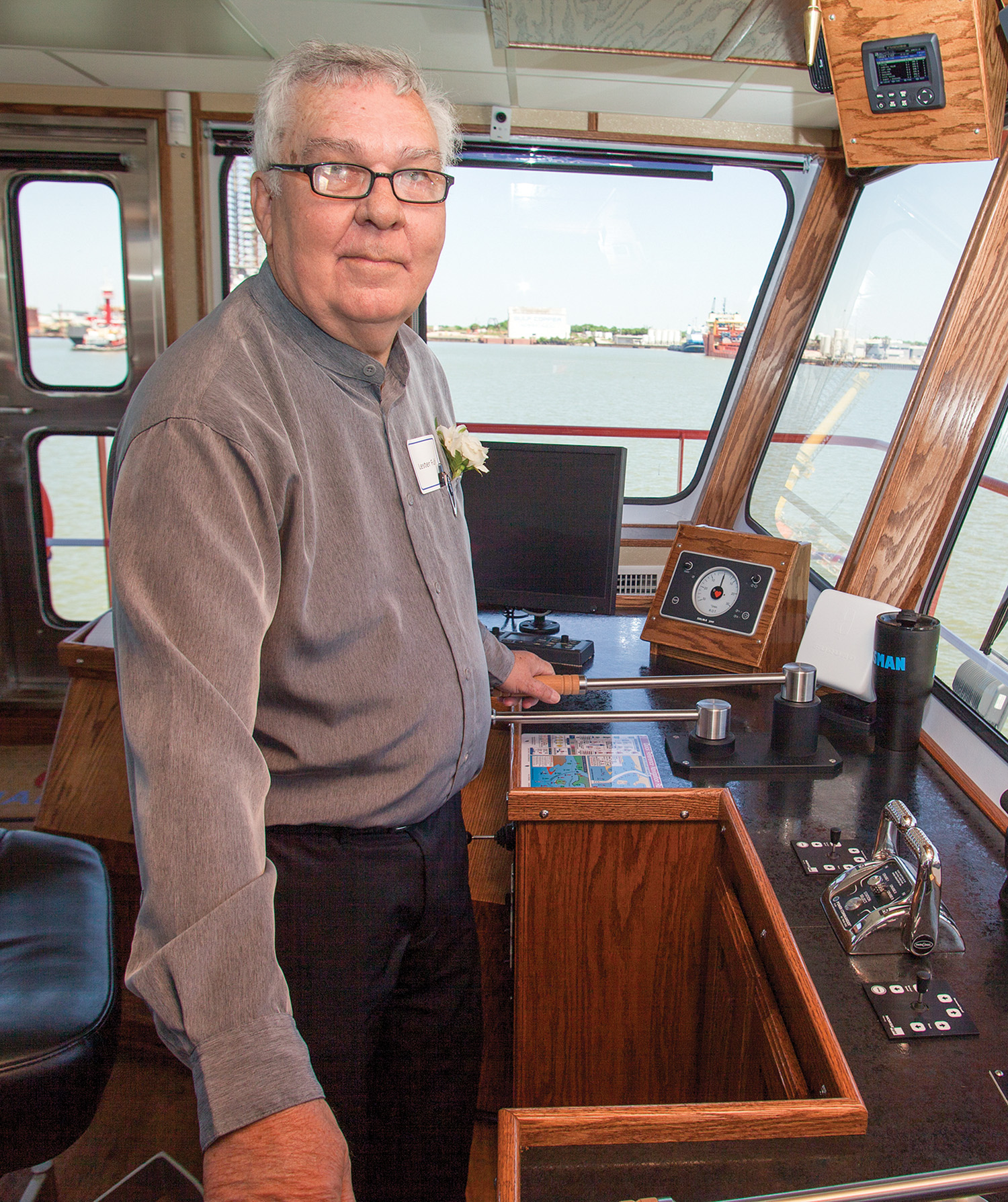 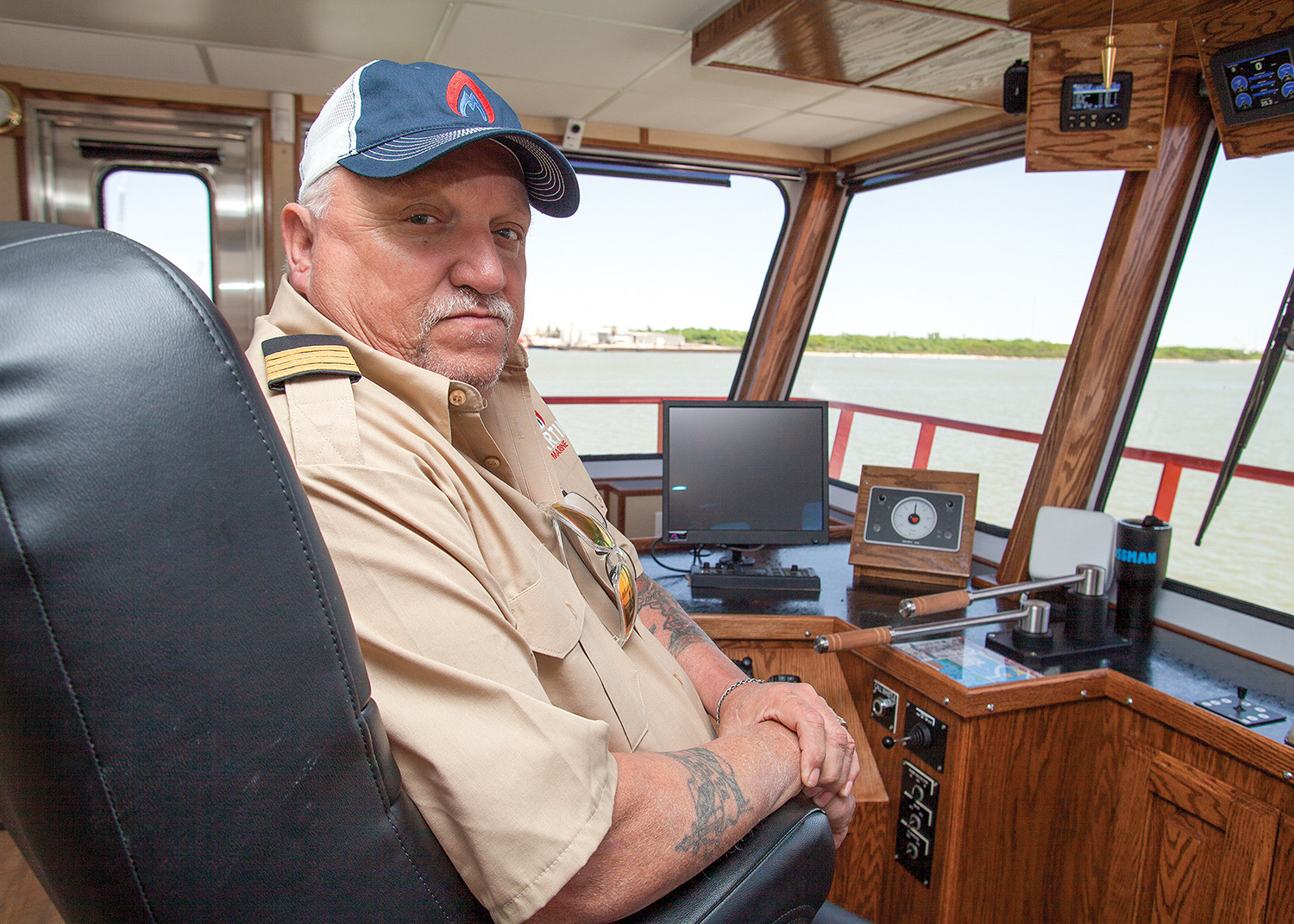 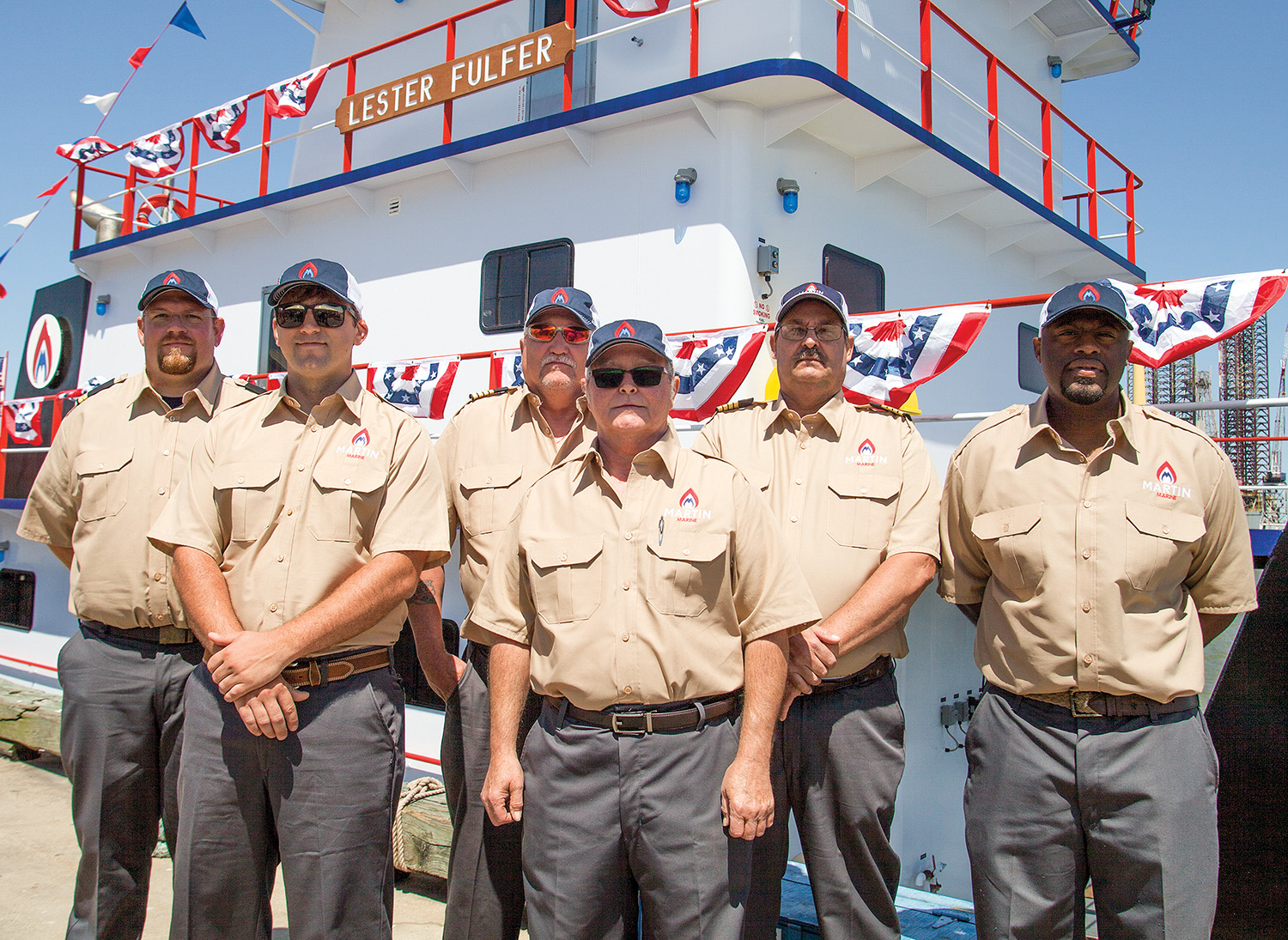 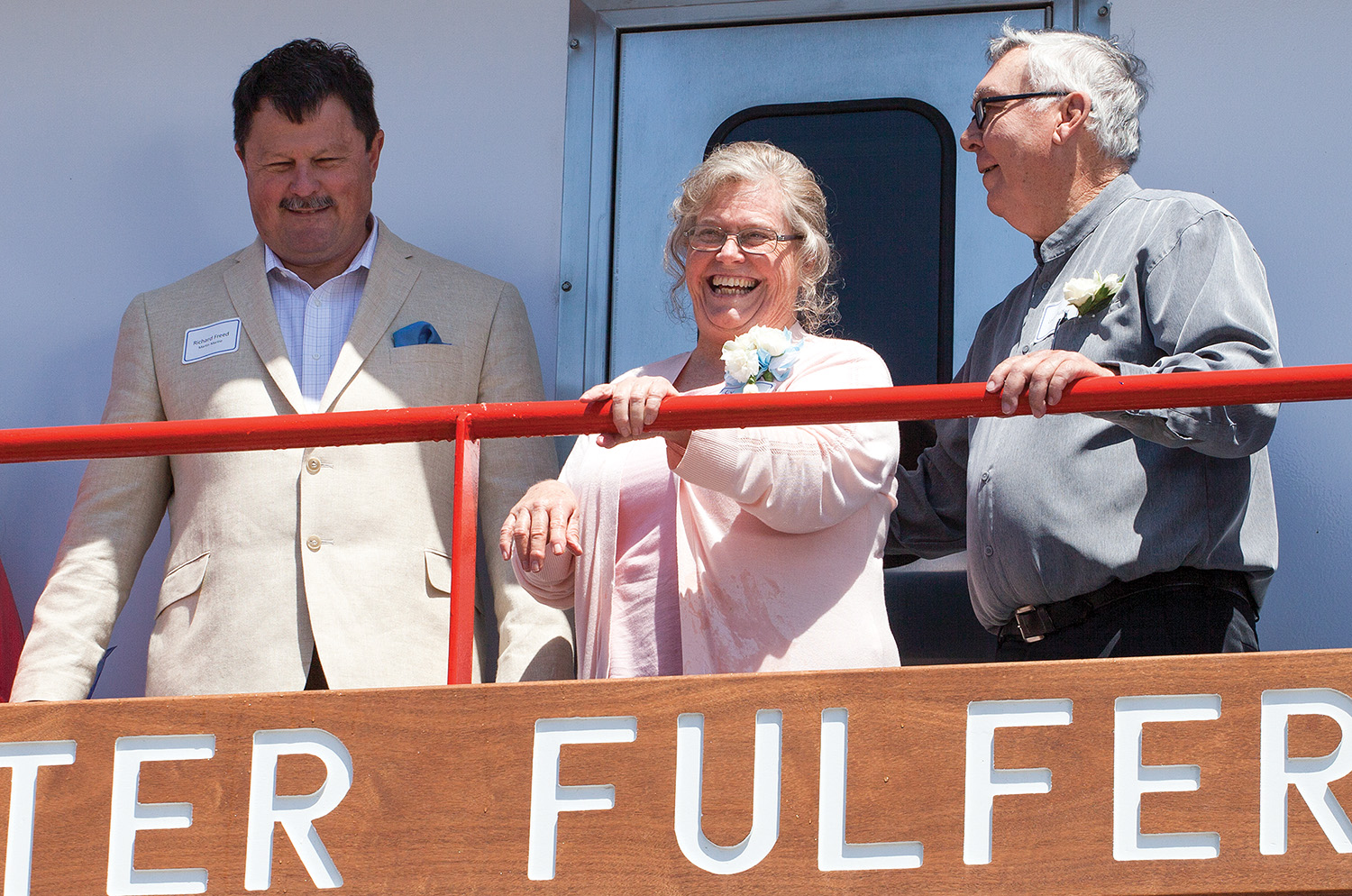 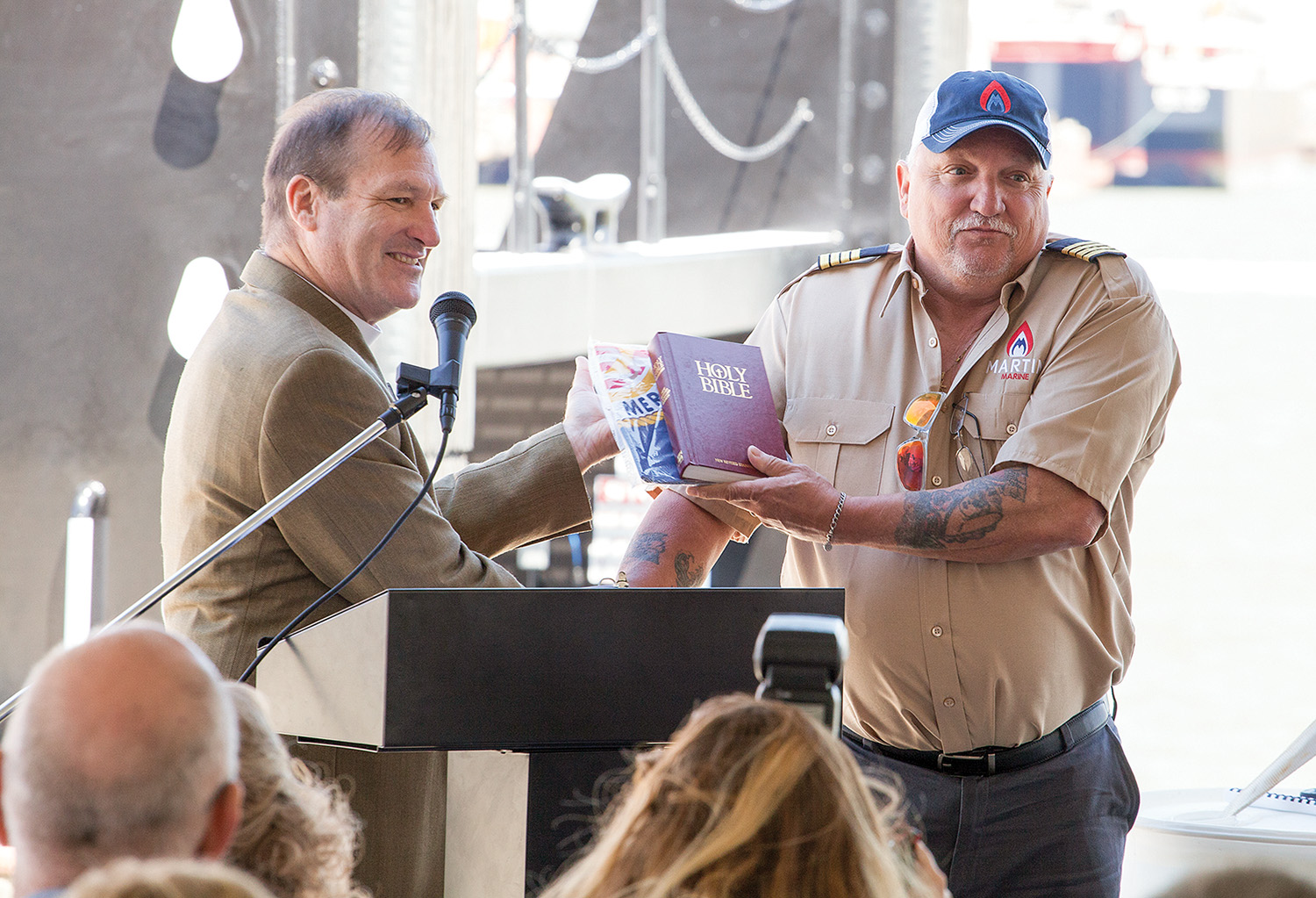 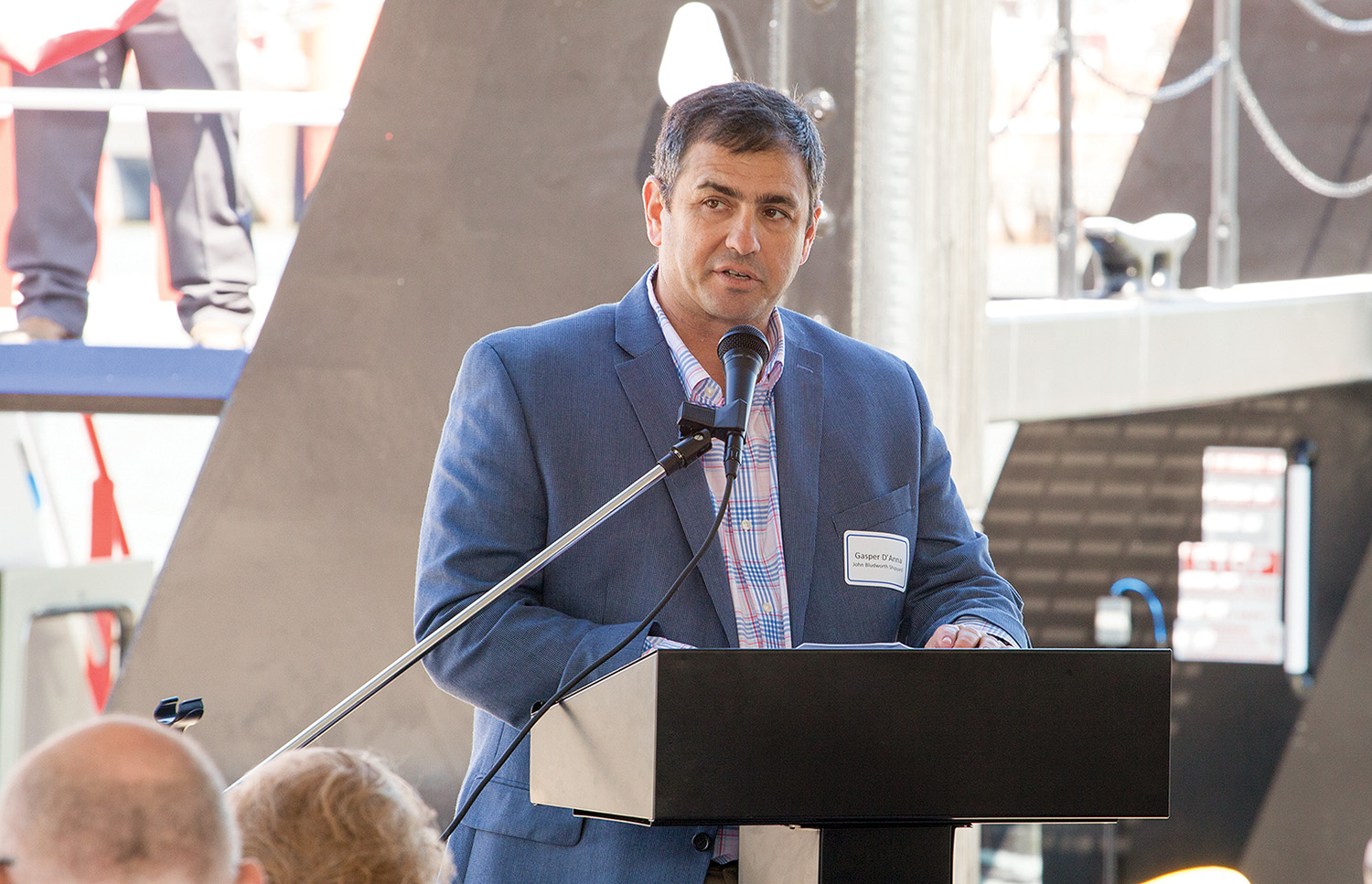 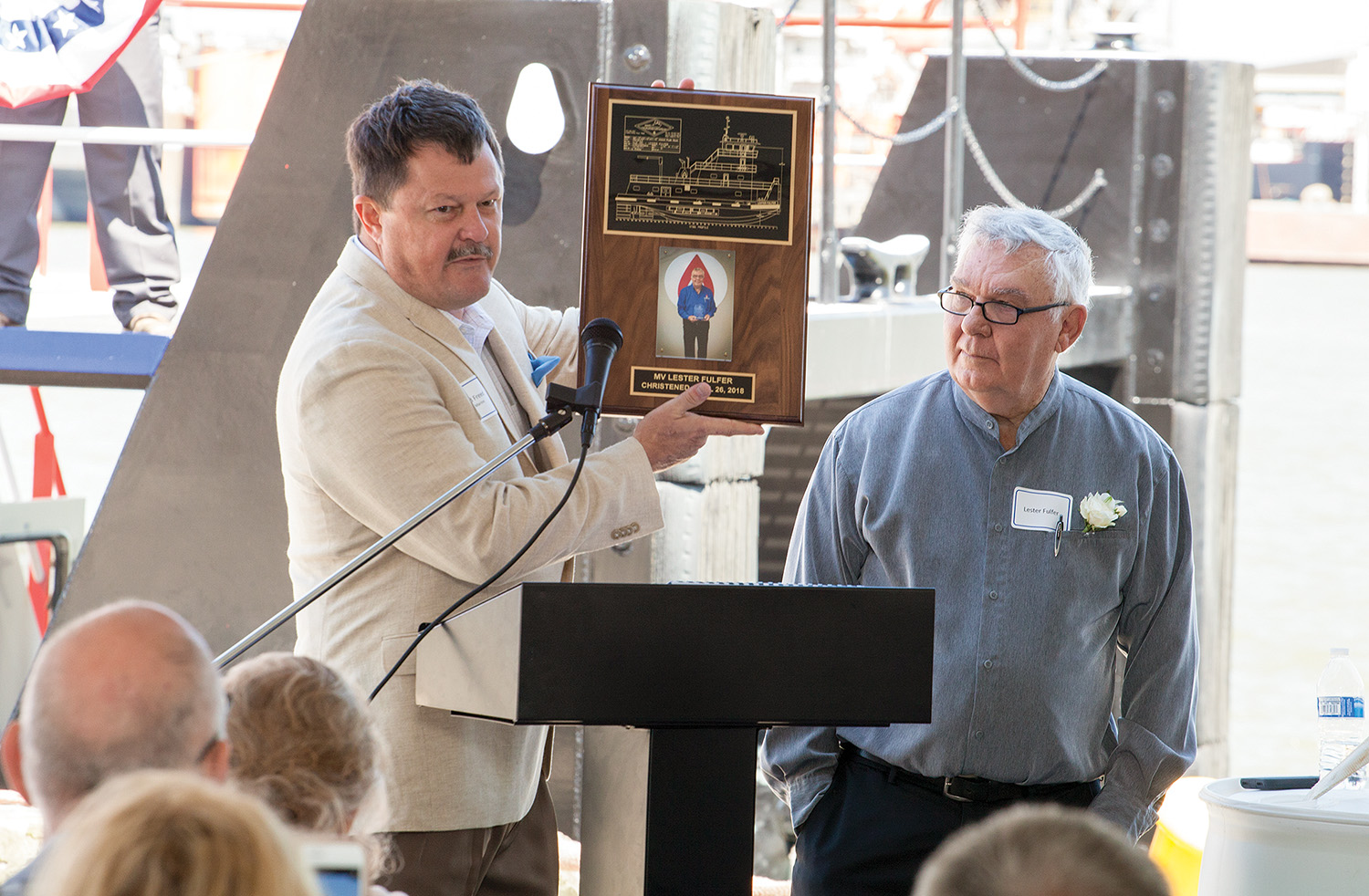 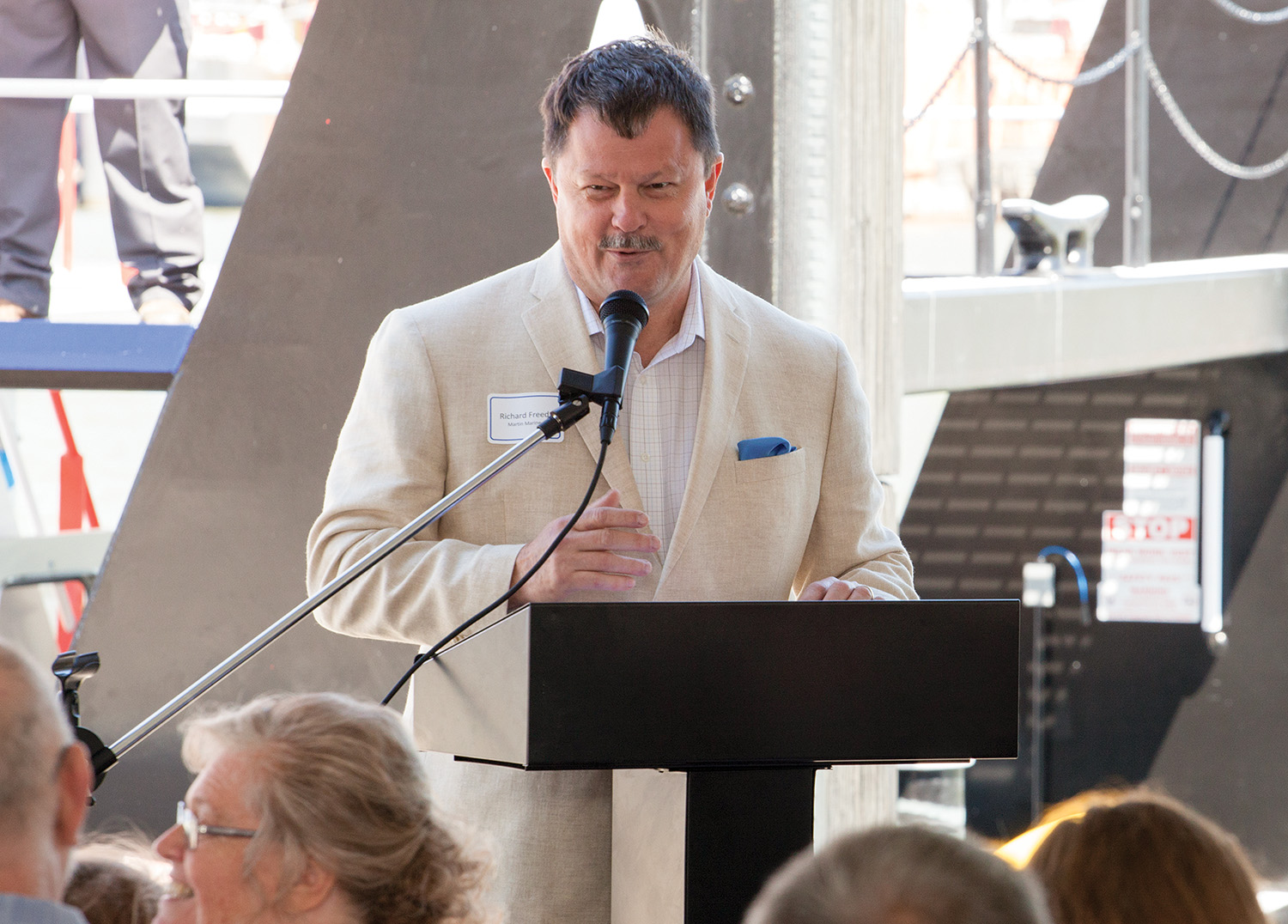