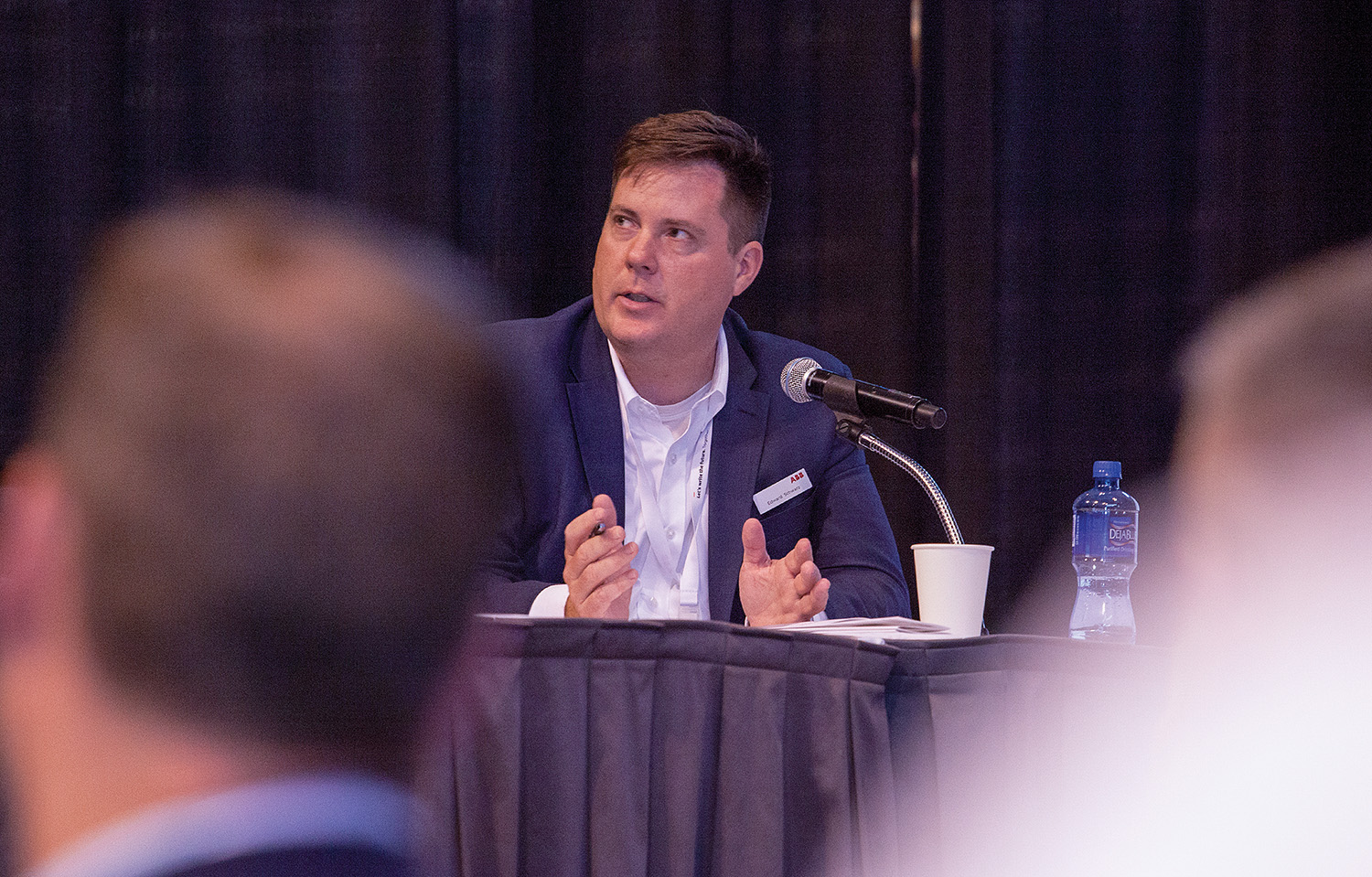 For decades, the dominant propulsion option on the inland waterways was a traditional propeller driven by mechanically connected drive engines. Over time, Z-drive towboats have claimed a portion of the market, bringing technology long popular offshore and on tractor tugs to the inland waterways.

And some in the industry are now hoping diesel-electric technology could soon also earn a place in the inland market.

Attendees of the 2018 Inland Marine Expo (IMX) got a primer in diesel-electric technology and the role it could play on the inland waterways aboard towboats.

Joshua Sebastian, engineering manager at The Shearer Group, led a group of panelists, which also included Ed Schwarz, vice president of sales for ABB Marine & Ports, and Erasto Fernandez, marine projects engineer for Marathon Petroleum Company. Sebastian represented the naval architecture side of the discussion, with Schwarz and Fernandez speaking from the propulsion system design and operational perspectives, respectively.

Sebastian first overviewed the basic design of diesel-electric drive systems, which use a generator set, rather than mechanically-connected drive engines, to drive propellers. That generator set is connected to electric motors by way of switchboards, transformers, variable frequency drives or frequency converters. That combination can drive an azimuthing pod, direct drive, Z-drive or even conventional shaft-driven propellers, Sebastian explained.

“The applications are pretty much unlimited,” Sebastian said, adding that The Shearer Group is currently working on a diesel-electric system paired with a Voith Schneider Propeller for an inland ferry. “It can apply to any kind of basic propulsion.”

Sebastian explained that, for a traditional mechanically-connected drive system, naval architects design the system to achieve maximum efficiency at one specific load or engine RPM. With a diesel-electric system, though, designers can program the system for peak efficiency across a wide range of loads.

“We can customize the engine loads to give you peak efficiency and start driving down fuel consumption,” Sebastian said.

Sebastian said vessels can now even pair a generator with a traditional mechanically-connected drive engine, with the generator providing a boost of a couple hundred horsepower when conditions warrant. For a towboat on the inland waterways, that hybrid design could make the difference between having to go with Tier 3 or Tier 4 engines.

“This does give you the flexibility of using a smaller engine and getting a boost in capacity,” he said. “A real good application of this is, if you’re looking at a towboat in the 1,800 to 2,000 hp. range, right now if you build that boat you’re talking about Tier 4 engines.”

Under guidelines from the Environmental Protection Agency, Tier 4 marine engines aboard towboats require a urea exhaust treatment system, while Tier 3 engines do not require emission scrubbers. Using the hybrid design of a smaller engine and a larger generator allows a towboat to achieve a higher horsepower—when needed—at the lower EPA tier.

“Now you can back feed through your reduction gear to get you to that 1,800 or 2,000 hp. propulsion,” Sebastian said. “You don’t need that 100 percent of the time, but it gives you that flexibility and keeps you out of Tier 4 engines, which I know is a big concern on towboats both for operations and designers.”

Sebastian said that scenario could also allow a company to outfit its entire fleet with the same main engines, since occasional boosts in horsepower would come from the generators, which would streamline spare parts inventories, repairs and maintenance schedules.

And yet opting for a complete diesel-electric system with no traditional main engines provides some real benefits, the panelists said. They first highlighted the maintenance savings from diesel-electric propulsion.

“You can program these engines to say, ‘I want a 1,000-hour gap between all my engines,’ so they don’t all come due at the same time,” Sebastian said. “Or maybe I want two to come due at 2-1/2 years and two at the five-year mark. There’s an infinite amount of programmability.”

Generators also have less wear-and-tear than traditional main engines. Additionally, in a diesel-electric propulsion system, if one generator goes down, a vessel still retains total steerage. The remaining generator or generators will continue to drive all the propellers. Conversely, if a main engine goes down aboard a vessel with traditional propulsion, that vessel has also lost a propeller.

The panel also pointed out another tangential benefit to going with a diesel-electric propulsion system rather than a traditional main engine system: flexibility in vessel design.

That means, whether a vessel with diesel-electric propulsion has Z-drives, electric thrusters or even traditional shaft-driven propellers, the generator set can be located anywhere in the vessel, with the only variable being the length of power cables. That buys designers a lot of square footage in the lower hold or the rear deck.

Sebastian said its easy for a company to assess the efficiency of current drive systems and to determine whether a diesel-electric propulsion system would make financial sense. Main engines and generators alike store a treasure trove of data, Sebastian said, which engineers can analyze.

To assess the efficacy of diesel-electric propulsion on the typical inland towboat, The Shearer Group did a side-by-side comparison of a hypothetical mechanically-driven towboat with two 1,200 hp. main engines and two 200 kw. generators, and a hypothetical towboat with diesel-electric propulsion consisting of four 800 hp. generators. Engineers at The Shearer Group pulled actual operational profiles from towboats working on the inland waterways for the study.

“Capital expenditures between the two were within $50,000 of each other, depending on which option you get on the propulsion,” Sebastian said.

That price difference was quickly made up, though, once fuel savings and the elimination of urea costs were factored in.

“We’re talking about over a span of 10 years almost a million and a half dollars of fuel savings for a typical diesel-electric setup for 2,400 hp.,” Sebastian said.

Even for vessels in the 6,000 hp. range, diesel-electric made an attractive option, Sebastian said, with savings of almost 100,000 gallons of fuel per year over a mechanically-driven setup.

Fernandez said his company looked extensively into going with diesel-electric propulsion on its fleet boats. For him, the maintenance savings were going to be the biggest plus.

“The biggest savings comes through maintenance—being able to carry less inventory of parts,” he said. “Being able to do the maintenance and overhauls further down the road means I have to do less over the lifetime of the vessel.”

Sebastian said, thus far, there is no diesel-electric propulsion-drive towboat operating on the inland waterways. Although the Shearer Group worked closely with Marathon to design a diesel-electric towboat, Marathon opted to stick with traditionally-driven vessels for now.

“The biggest issue is cultural—who’s going to do it first?” Fernandez said. “Who’s going to tell the captain, ‘You have no more sticks. These two joysticks do everything for you.’ That’s the complicated part.”

“We do have towboats with diesel-electric running in South America,” Schwarz said.

“In the rest of the world, they are everywhere,” Fernandez added.

“They are running with a similar design, just not on the U.S. rivers yet—that’s the next step,” Schwarz said.

ABB has produced a white paper which argues “the U.S. inland river market is ready for electric propulsion.” To view the study, go to www.new.abb.com and search for “ETB.”