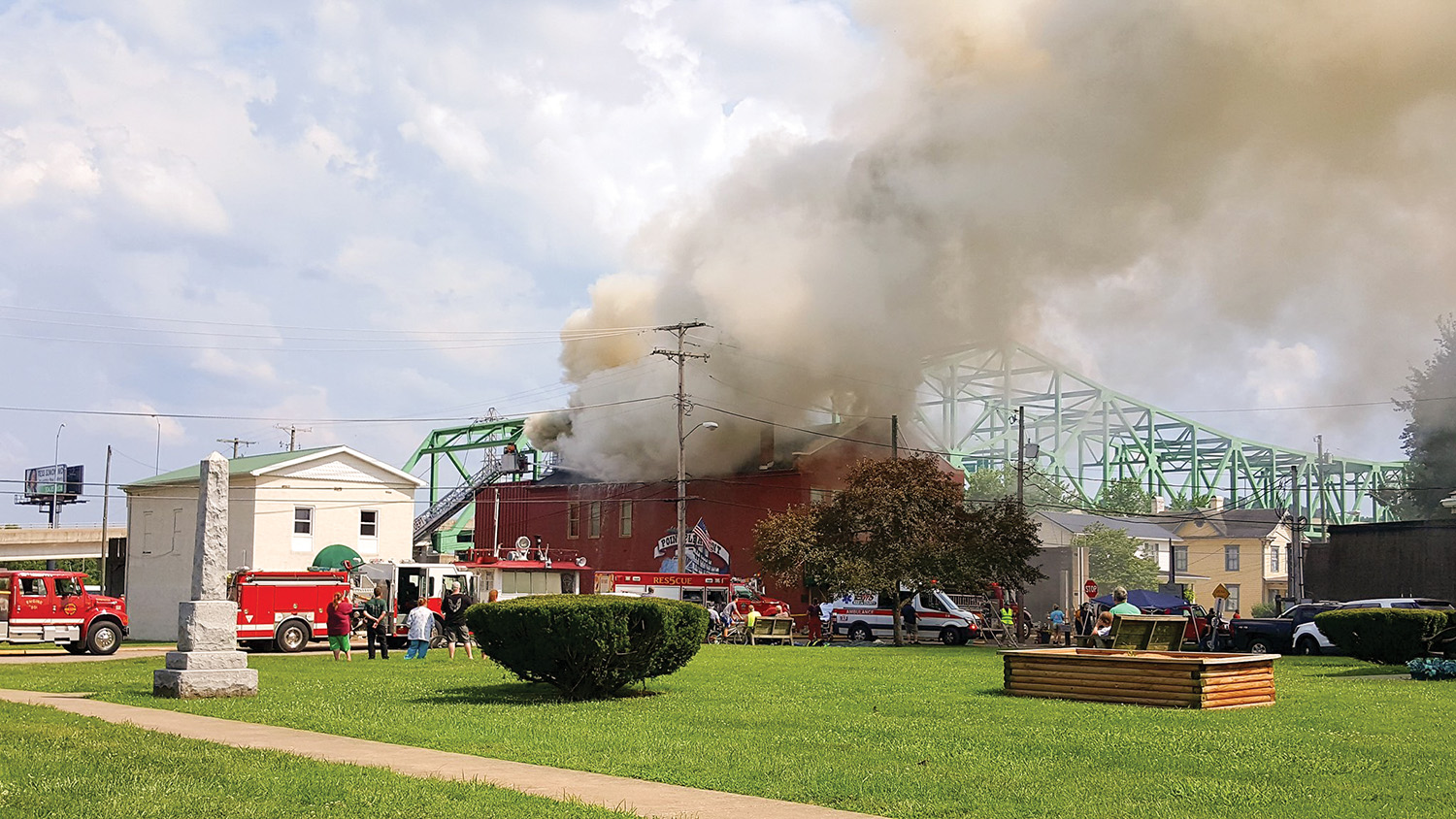 The recovery process has started, aided by community residents who showed up to remove, clean and store displays and other materials salvaged from the museum.

Museum officials are planning their next steps in reopening, perhaps in about two years.

About 16 visitors and three staff members were in the museum in the early afternoon of July 1. Executive Director Jack Fowler said he was helping visitors with a towboat pilot simulator when the fire alarm went off. He opened a pull-down door to the attic, and smoke billowed out. He and others attempted to fight the fire with extinguishers, but it was too large.

“It had to have been burning for some time,” Fowler said.

Everyone got out of the building safely.

Mark Kincaid, a pilot for Marathon Petroleum, said he was in the museum when the fire was discovered.

“It happened quickly,” he said. “We’re just lucky it wasn’t a busy day.”

The Point Pleasant Fire Department and seven other departments in West Virginia and Ohio answered the fire. By the time some had arrived, flames were coming through the roof. Smoke was coming out an attic window at one end of the building and a pilothouse mounted on the roof at the other end.

Fowler said he asked the Point Pleasant department if the fire could be fought without dousing the building and its contents in water. It could not.

“We tried to get salvage coverage on it, and we got some items out early on,” said Point Pleasant fire chief J.R. Spencer.

Word of the fire spread through social media as firetrucks were responding to the scene. Fowler said one person on the scene received a text from a friend in Okinawa asking what was happening.

Social media also was used to spread word that volunteers were needed to remove the museum’s contents.

By the time the fire was extinguished, about half the ridgeline of the roof was gone. The fire itself was contained to the attic, but water, heat and falling debris damaged the structure and contents on the building’s first and second floors.

A cause for the fire has not been determined.

A brief heavy rain moved through the area as firefighters battled the blaze. Almost as soon as it stopped, pickup trucks from the city of Point Pleasant and from volunteers moved in as firefighters and others carried out the museum’s contents.

Among them were several models of steamboats, old books, steamboat and towboat equipment,  and framed and unframed paintings and photos. Loading continued as a light rain fell. When full, trucks took the material to the city youth center.

Removal and cleanup continued the next day.

“There were a lot of volunteers, particularly from AEP. They really jumped in and cleaned that first floor. They were moving up to the second floor, but the insurance people stopped them,” Fowler said.

Some parts of the building and contents had little damage. The pilot simulator used for training professional pilots had no damage, and the one used by the public had some damage but is salvageable, Fowler said.

Most contents were removed the day of the fire and the following day. They were taken to the city’s youth center, where more than a dozen volunteers at a time dried and cleaned them.

At first they were placed in a large area called the wet room, where they were sorted and dried.

The model of the Silver Bridge, which collapsed into the Ohio River at Point Pleasant on Dec. 15, 1967, was one of the more popular displays at the museum. It sustained minor damage. It was removed from its case and placed on the youth center floor to dry.

“That was the first thing we went after,” Mason County, W.Va., Commissioner Rick Handley said as about a dozen volunteers in the youth center worked.

After the items were cleaned and dried, they were taken to what was called the dry room to await their transfer to the museum’s temporary quarters. On Tuesday, members of the Point Pleasant High School football team were assisting that effort.

Shana Roberts, a volunteer in the cleanup, said the call went out on Facebook for volunteer labor and for cleaning supplies, food and drinks. The community responded, with more volunteers working the second day than the first, she said.

“We’ve made a lot of progress in two days,” she said.

Roberts was not sure how long the cleanup effort would take. It could go into the following week, she said.

Standing on the museum’s second floor two days after the fire, Fowler said the first and second floors themselves were not damaged by the fire, but they were damaged by falling ashes and water used to fight the blaze. At least one steamboat model was destroyed.

The museum was in an old commercial building that dates from the 1880s. The building is owned by the city of Point Pleasant, but the museum foundation is responsible for its contents.

Fowler said he expects the building’s roof, walls and floors will need to be replaced. The best-case scenario for reopening in the current location is 18 months, but that’s probably too optimistic, he said.

“My best guesstimate would be two years. It depends on what we have to do with the structure,” he said.

For now, Fowler and his staff are operating in smaller quarters about a block from the museum. Fowler said he hopes some displays can be opened to the public, and perhaps a room can be dedicated to showing some of the videos that have been popular with the museum’s visitors.

“We’ll continue to function in some manner to stay solvent and hopefully generate some money,” Fowler said.

The museum has two scheduled events this summer that will go on—a cruise aboard the Belle of Cincinnati and the annual Tribute to the River festival. Fowler said he hopes work can begin on repairing the building in March.

A GoFundMe account has been started to accept donations for the recovery effort. It can be found at www.gofundme.com/river-museum-fire-recovery-fund.

“We’ll rebuild the museum in some form or fashion. Hopefully, it’ll be right here,” Fowler said.