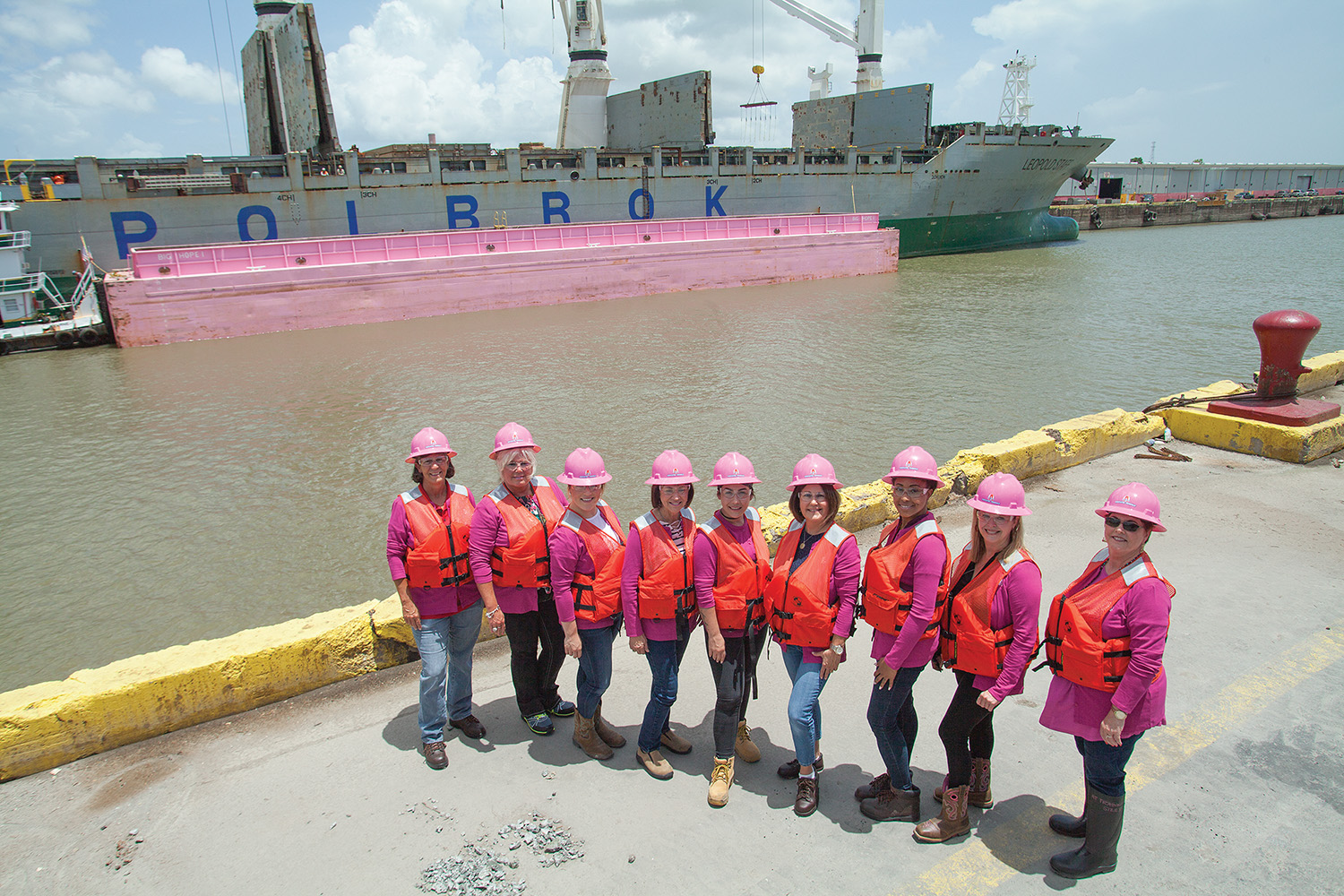 Anyone passing St. Bernard Port Harbor & Terminal District’s Arabi Terminal last week might have seen a rarity for the area: a bright pink covered hopper barge alongside a cargo ship.

Ceres Barge Line’s Big Hope 1 barge was there at the Associated Terminals-operated, slack-water slip to receive some project cargo, but it was carrying on a much greater mission at the same time.

Ceres launched the Big Hope 1 in May 2012 with the goal of raising awareness and money to fund research for all types of cancer, particularly breast and women’s reproductive cancers.

Since then, Ceres offers the barge as part of its regular fleet, asking only that customers also make a donation to the Mary Crowley Cancer Research in Dallas, Texas. Since the barge’s launch about six years ago, Big Hope 1 has generated more than $860,000 for research at Mary Crowley.

Ceres Barge Line’s Vince Schu, who handles heavy lift sales and logistics for the company, and his wife, Julie, spearheaded the project, with the support from Ceres’ leadership. Sherwin Williams donated the paint for the barge, which was built at Jeffboat in Jeffersonville, Ind. And the paint donation was significant: Schu said it takes about 60 gallons to paint Big Hope 1, which has been cleaned and repainted four or five times in six years.

Schu stressed that Ceres does not benefit in any way from donations related to Big Hope 1. The company doesn’t even oversee donations.

“We don’t handle any of the money for Mary Crowley,” Schu said. “We don’t gain any money from that. Your donation goes directly to Mary Crowley.”

Under the “donate” tab at www.MaryCrowley.org, there’s a Big Hope 1 link for making a donation.

Schu added that Ceres will host its Pushing Hope Annual Marine Industry Charity Tournament August 16–18, which will feature golf, softball and kickball tournaments and a fun run/walk. All proceeds will go to Mary Crowley Cancer Research. With the charity tournament, Schu said he anticipates funds generated by Big Hope 1 to cross the seven-figure threshold.

“We’re hoping to hit the $1 million mark this year,” he said.

Last Monday, July 9, to celebrate the mission of Big Hope 1, the ladies from Associated Terminals’ Arabi facility gathered for a photo in front of the barge. They wore pink hard hats and pink cardigans in support of Big Hope 1 and breast and women’s reproductive cancer awareness. Associated Terminals made a donation to Mary Crowley Cancer Research as part of the project.

“It is a great opportunity to work with Big Hope 1,” said Todd Fuller, president of Associated Terminals. “Giving back is one of our main priorities, and we are honored to aid Ceres in promoting awareness for cancer research.”

Big Hope 1 was at the Port of St. Bernard’s Arabi Terminal to receive a project cargo headed for a petrochemical project in Pennsylvania—about 1,818 miles upriver. The freight forwarder was Fagioli.

To discover more about Big Hope 1 or to register for the upcoming charity tournament, go to www.CeresBarge.com. Learn more about Associated Terminals, the largest stevedoring company operating on the Lower Mississippi River, at www.AssociatedTerminals.com.