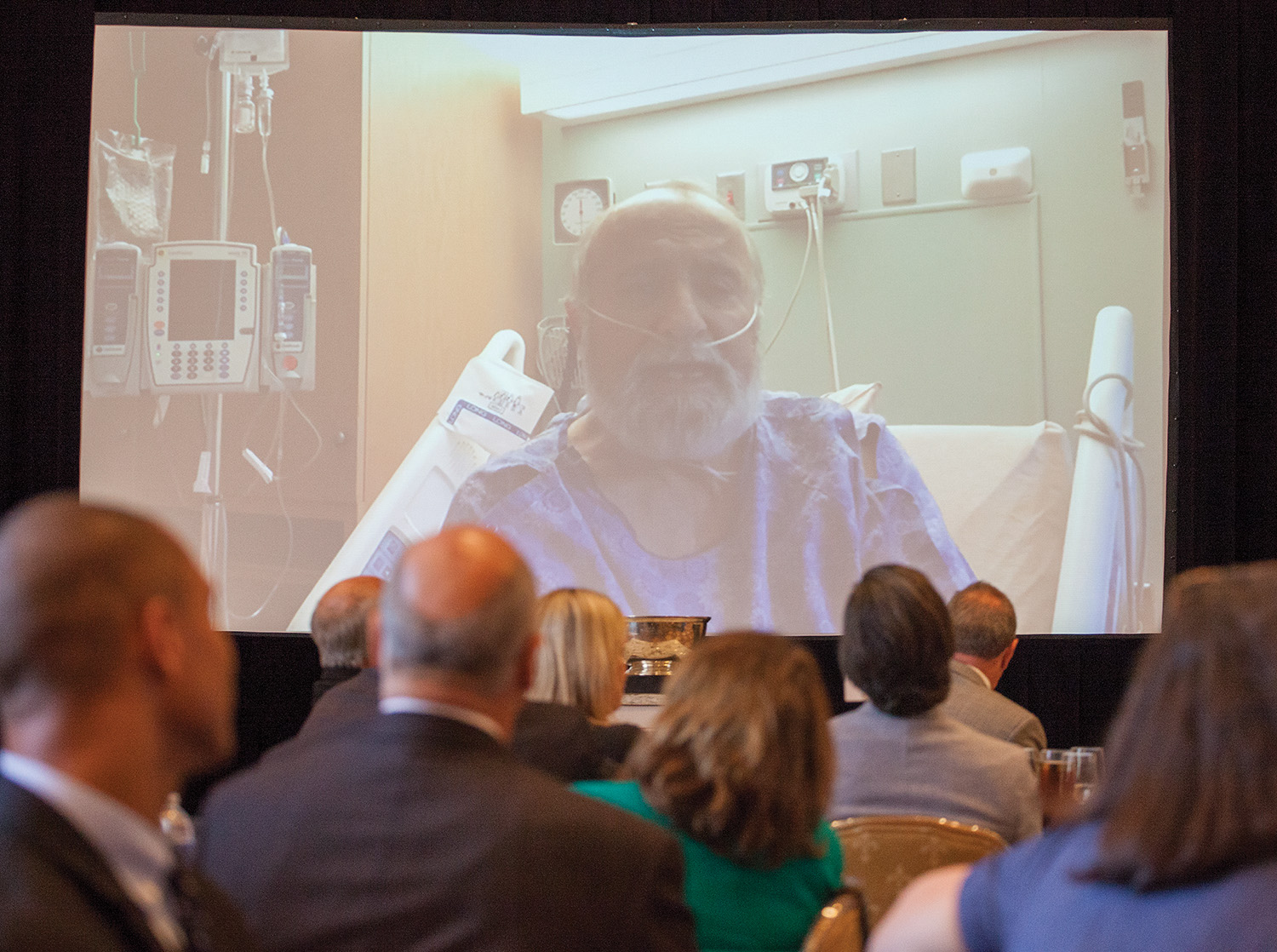 The event was arguably the most joy- and laughter-filled Bertel award luncheon in recent memory, and for good reason. Bergeron, while a successful shipbuilder and businessman, is all-the-more a beloved mentor, colleague, friend and family member to many from his hometown of St. Bernard Parish, to the larger New Orleans maritime community and throughout the Gulf Coast.

And the joy and laughter persisted even in Bergeron’s absence. Bergeron, who five years ago received a kidney transplant, was in the hospital recovering from an infection.

“He got stuck at Ochsner—they’re holding him against his will,” Bergeron’s daughter Tiffany Bergeron Cook joked with the crowd. “He’s doing better, but he just wasn’t doing better fast enough to be here.”

Luncheon organizers, though, made sure that, not only could Bergeron watch the event unfold, but attendees and speakers could also interact with him in real time through FaceTime. A computer was placed at the front of the banquet room, with Bergeron watching from his hospital room. Prior to the award ceremony, a line formed as attendees gathered around the computer to wish Bergeron well and to offer their congratulations.

Bergeron distinguished himself in the maritime industry at a very, very young age. David Fennelly, chairman of Associated Terminals and Turn Services, described how Bergeron bid on and won the contract in the early 1970s to build the Steamboat Natchez.

“Did you know, which you now do, that Mr. Bill Bergeron signed the contract to build the Steamboat Natchez at the age of 23?” Fennelly said. “Did you hear me? Twenty-three years old, and he signed a contract to build a steamboat. And he did it, not only signing the contract, but he built one of the most iconic symbols of the City of New Orleans. The Natchez and the St. Louis Cathedral are together one of the most photographed duos used to promote our city worldwide. And that’s just one of the many accomplishments of Mr. Bill Bergeron.”

To this day, the Natchez can be seen plying the waters of the Mississippi River in and around New Orleans, with its calliope often echoing through the streets of the French Quarter. Bergeron also helped his family-owned machine and fabrication shop in St. Bernard Parish grow from fewer than a dozen employees into a marine manufacturing and service firm with as many as 1,400 employees and operations in Louisiana, Mississippi, Alabama and Venezuela. That shipbuilding company would sign what was at the time the largest inland river barge construction contract in U.S. maritime history, valued at $58 million.

More recently, Bergeron just finished a five-year stint on the Board of Commissioners of the Port of New Orleans, having served one year as chairman. Louisiana Governor John Bel Edwards recently named him to the St. Bernard Port Commission, which leads the St. Bernard Port, Harbor & Terminal District.

“He gives of himself at every turn,” Fennelly said, who called Bergeron both a mentor and a friend.

And it was those personal remarks that set Bergeron’s award ceremony apart. Sidney Torres III, a St. Bernard Parish attorney and civic leader and Bergeron’s first cousin, praised him for his natural leadership abilities.

“First, he’s demonstrated that, when he’s in charge, he’ll get things done,” Torres said, adding, “When he’s a member of a team, he’ll do his part and more.”

“As a friend and family member, he is loyal, and he’s always there to listen and advise,” Torres said. “And when he gives advice, it’s honest and straightforward.”

“The thing about Bill is he will never deny friendship and he will give you the hard advice you don’t want to hear,” Charbonnet said. “He’s the guy to go to when you need to know the truth.”

In a recorded video, Bergeron addressed the crowd from his room at Ochsner Medical Center.

“Even with my persuasive ways, I couldn’t convince the doctors to let me out to be there,” he said. “But thank you all for being here. Thank you, thank you.”

Bergeron thanked the staff at Ochsner Medical Center, where he received his kidney transplant. He also thanked his sister-in-law, who was his living kidney donor. He also was sure to thank the World Trade Center and the nominating organizations.

“I want to say a special thank you to my deceased parents who instilled in me at a very young age and taught me about hard work, integrity, honesty,” Bergeron said, also thanking his two brothers, their wives, and his wife, Joyce. “My Lord, what has she put up with the last 40-plus years.”

He also recognized his daughter, Tiffany, and his grandson, Will, who lives with Duchenne muscular dystrophy.

“Will was fortunate to celebrate his 18th birthday most recently, and he has a great attitude,” Bergeron said. “He has the Gleason attitude. Keep looking forward, take it one day at a time, see what you can do to improve things. I’m so proud of him.”

He also recognized his son-in-law and his granddaughter, Emily.

“I’m so blessed,” Bergeron said. “I’m so happy, and it’s been such a great experience, these 50-plus transformative years. Because I’ve had the opportunity to work in every aspect of the maritime community and port community, everything from barge building and shipbuilding, the steamer Natchez, towboat operating, pushing barges, steamboats, towboats, terminal operations and warehousing.”

And five years ago, about the time he got his kidney transplant, he was appointed to the Port of New Orleans Board of Commissioners.

“I said, ‘This is an opportunity to pay it forward,’” Bergeron said.

But with all that experience under his belt, Bergeron said he still feels like there’s a lot left to do, especially given his recent appointment to the Port of St. Bernard’s Board of Commissioners.

“I’ll be honest, while I’ve got 50-plus years, I’m not near ready to quit,” he said. “I think I’ve got some great contributions I can still make.”

The award is named for C. Alvin Bertel, who led the effort in the 1940s to pass a constitutional amendment that established the non-political selection of the Port of New Orleans Board of Commissioners, known locally as the “Dock Board.”