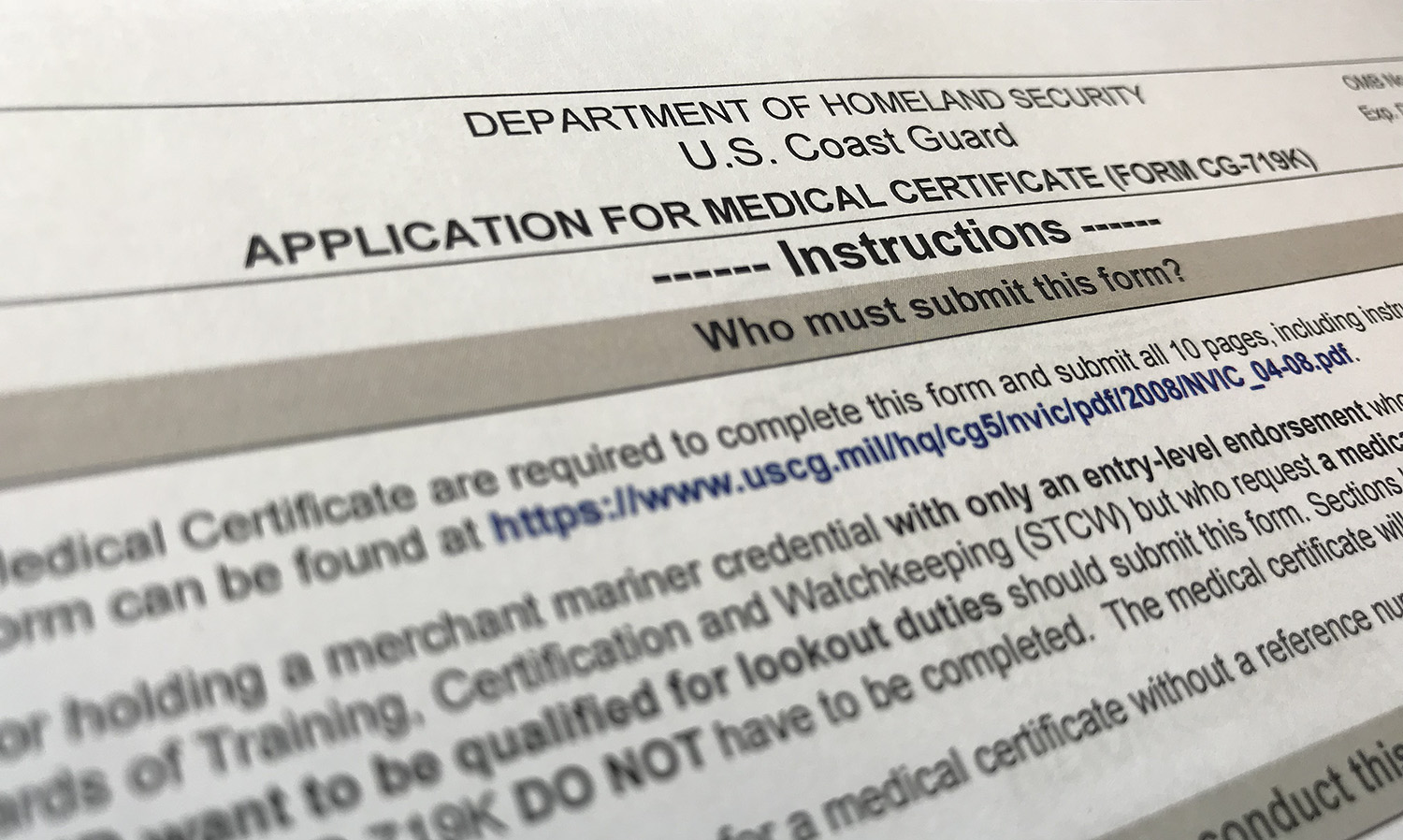 The U.S. Coast Guard has updated the Application for Medical Certificate, known as Form CG-719K. While much of the information remains the same, the form, which has gone from four to 10 pages, has a different format.

Released in March, the forms are now available online on the National Maritime Center’s website. They are required for officers and mariners with a qualified rating and must be completed within 12 months of application date (36 months if applying for Raise of Grade).  The medical provider completing the required examination must be a physician, physician assistant, or nurse practitioner who is licensed in the U.S. or a U.S. territory, according to the NMC.

According to Lisa Novak, public affairs officer with the Coast Guard, the form was changed to improve clarity and ease of use, in addition to assisting mariner applicants and their medical providers in documenting the applicant’s medical status. “The Coast Guard revised the Form CG-719K with input from maritime professionals and medical professionals serving on the Merchant Mariner Medical Advisory Committee (MEDMAC) and the Merchant Marine Personnel Advisory Committee (MERPAC),” said Novak. “The Coast Guard published a 60-day and a 30-day notice requesting comments on the CG-719 Collection of Information Series.”

Novak said that changes on the new form will expire on March 31, 2021, but the old form will be accepted by the NMC until December 31, 2018. Medical forms signed by a medical practitioner after September 1, 2018, must be done following the new format, however.

Mariners will still need to attach either a letter stating that he or she is a member of a random drug testing program or actual drug test results with the application along with all supporting documents and fees when turning in to the Coast Guard.

Novak said there have been no new changes to the medical evaluations of mariners, so there should be no impact beyond the improvement of the form. There are some in the industry, however, who disagree.

Bill Kline, president of The River School in Memphis, Tenn., said there are a few things about the new forms that are causing issues as the school works to help mariners obtain or renew the medical certificate. “One is the requirement that the medical provider date and initial the instruction pages and that the applicant put his or her name and date of birth on the pages,” he said. “Then, the form must be submitted along with the instruction pages. Most folks are going to simply tear off the instruction pages, which can cause the form to be returned as incomplete.”

Kline said another change involves the color-vision test on page 7. “The old forms would allow a medical practitioner to certify that the applicant could distinguish between primary colors (red, green, yellow and blue),” he said. “That’s apparently no longer the case and a recognized color-vision test must be administered.”

In response to this concern, Novak said that a mariner’s color sense must be determined to be satisfactory when tested by any color-vision test listed on the form, or by an alternative test accepted by the Coast Guard, without the use of color-sensing lenses. “The new Form CG-719K lists the approved color-vision tests and also includes a place for the medical practitioner to document alternative methods used to determine the mariner’s color sense as satisfactory,” she said.

Kline said he is also worried that page 8 will be a source of concern for some medical providers. “Some practitioners may be reluctant to certify ‘demonstration of physical ability’ when the applicant is not actually demonstrating the tasks indicated. Medical offices aren’t equipped with 50 feet of 1-1/2-inch fire hose that is charged and pressurized with water, for example.”

Page 8 is not a new section or requirement, according to the NMC. “This section of instructions has existed in the last two versions of the form,” said Novak. “Medical providers may use alternative measures to satisfy themselves that the applicant possesses the ability to meet the guidelines in the third column. If the medical practitioner feels unsure or that a more in-depth evaluation is warranted, then instruction No. 3 [on that page] advises that the applicant should be referred to a competent evaluator of physical ability.”

Kline said he admits that the new form is in the early days and the school will find a way to work it out. “But like most things from the government,” he said, “it is not going to be simple.”

To help combat questions or concerns with the new forms, Novak said the NMC plans to publish a set of frequently asked questions to the website in the coming months. She said the Coast Guard will also seek formal input on the new Form CG-719K from MEDMAC and MERPAC after the form has been in use for six to 12 months.