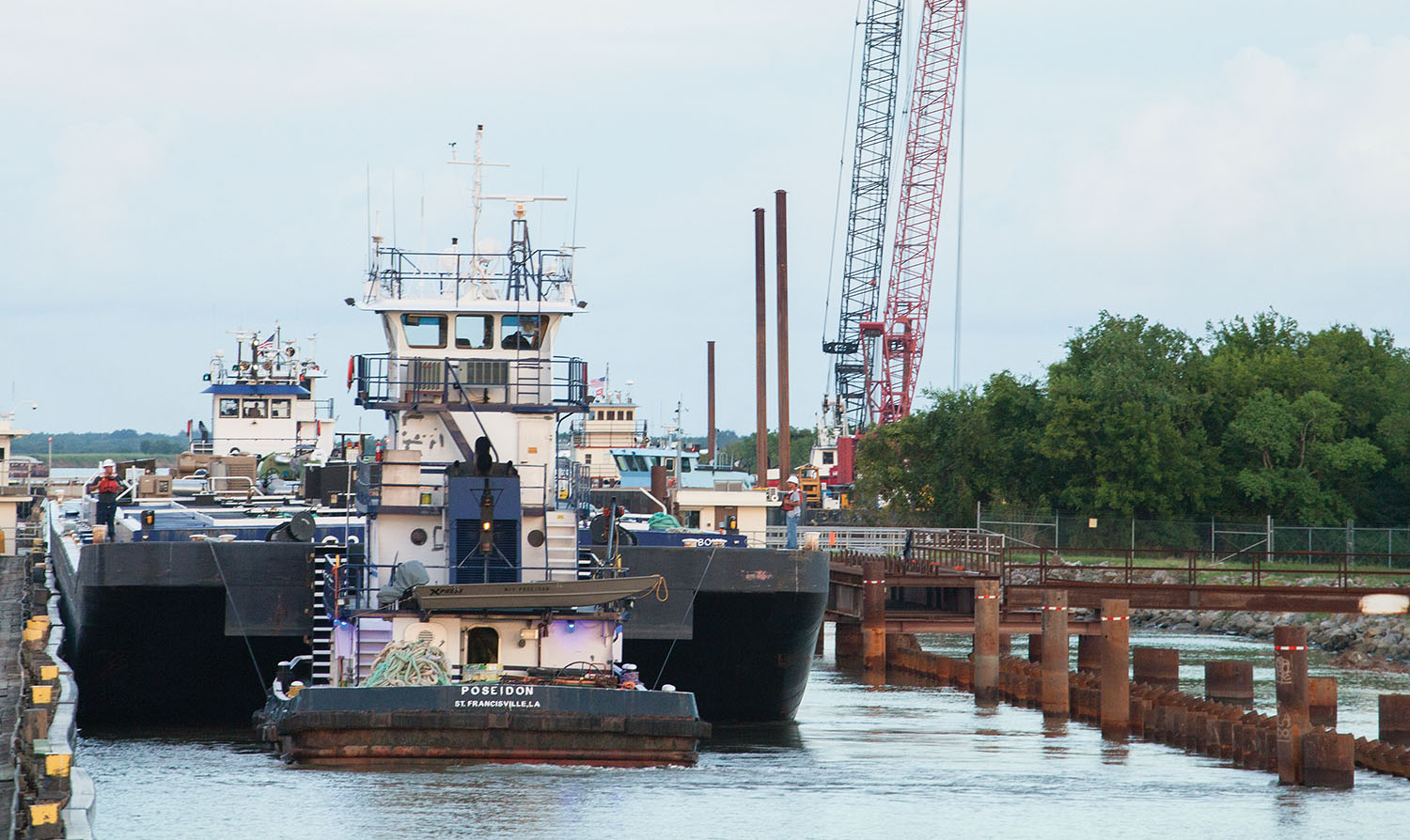 As the sun set August 9 over the Gulf Intracoastal Waterway (GIWW) and Calcasieu Lock in Lake Charles, La., the construction crew working to replace the lock’s south guide wall had already departed for the week. For the lock operator on duty and vessel crews in the area, though, the day was just getting started.

That night, there were around 100 vessels tied up to the east and west of the near-70-year-old structure waiting to lock through. Some tows on queue that week waited as long as four days to make it through Calcasieu, due in part to the limited lock schedule during construction.

Initially, the construction project, which will extend through late 2019, called for the lock to be closed to navigation from 7 a.m. to 5 p.m., Monday through Friday, and open to navigation on weeknights and all weekend. As work progressed through June and July, the queue often swelled to the 120s and 130s, especially during the week.

But the schedule isn’t the only thing that has slowed navigation.

At Calcasieu, construction crews first removed the old south guide wall, comprised of waterlogged and splintered timber piles. New metal pilings are being driven along the length of the south side. Crews are using a steel template, mounted atop guide pilings, to allow for precise placement of the 356 new pilings. Among mariners, the infamous template has garnered a nickname.

“That’s called the can opener,” Capt. Chad Morin said, motioning to the template.

Morin is captain aboard Deloach Marine’s mv. Poseidon, one of the vessels offering its services as an assist boat for tows locking through Calcasieu. Devall Towing, among others, also has vessels offering assist services at Calcasieu. Morin was on duty the evening of August 9, guiding tows through the lock.

With the template in place and low-to-the-water steel pilings accumulating where the new wall will be, towboat crews have grown quite cautious as they traverse the lock. That caution has slowed the locking process, as tows hug the north guide wall at a slow pace.

Morin said, especially early into construction, some tows would lock through without an assist boat, but he said it’s too easy for a tow to drift over to the south side of the lock and catch the hull of a barge on the template.

“The barge will be just low enough where that point will just start ripping stuff up,” Morin said. “Some guys are coming through here with chemicals that are highly explosive, gases, all kinds of stuff. The last thing you want to do is puncture one of those tanks. I wouldn’t come through here without an assist boat.”

The vast majority of tows now lock through with an assist boat. Of the 23 tows that locked through overnight August 9, only a couple came through unassisted. Fifteen used the Poseidon. That pace over a 12-hour period was pretty good compared to other shifts during construction thus far. However, even though 23 tows cleared the queue the night of August 9, 22 new vessels arrived on turn for a net reduction of only one.

The constricted lock and reduced locking hours contribute to the nagging queue, no doubt, but Morin said greater efficiency at Calcasieu also depends on vessels being ready when their number is called.

“It depends a lot on the guys locking through,” said Morin, a 14-year veteran with Deloach Marine Services. “They gotta line up. They can’t be lagging.”

That persistent queue led the U.S. Army Corps of Engineers, in collaboration with industry, to adjust the construction schedule. Now, the lock is closed for construction Monday through Thursday, from 6:30 a.m. to 6:30 p.m. Calcasieu is then open to navigation from 6:30 p.m. to 6:30 a.m., Monday through Thursday, and 24 hours a day from Thursday evening through Monday morning. On weeknights, vessel traffic moves eastbound for six hours and westbound for six hours. On the long weekends, traffic moves one-way in 12-hour intervals.

That schedule seems to be effectively reducing the queue, especially over the weekends. According to American Commercial Barge Line’s daily industry snapshot, American Currents, the queue at Calcasieu was 121, 131 and 131 August 1, 2 and 3, respectively. By Monday, August 6, it dropped to 91, then crept back up to 100 as the week progressed. By Monday, August 13, after almost four straight days open to navigation, the queue at Calcasieu had been reduced to 63.

While the queue last week began to creep into the 80s, industry and Corps leaders alike were positive about the new schedule.

“As long as we can keep these numbers up like this, we should be able to keep up with the amount of boats coming in,” said Michael McDonald with the Corps, a former lock operator at Calcasieu.

Industry, Corps and U.S. Coast Guard officials met at the lock August 10 to brainstorm long-term solutions for navigating the lock. Ideas discussed for mitigating the backlog of tows at Calcasieu included setting a queue trigger point for suspending construction, setting a staging area expressly for the next 12 to 14 vessels in the queue on either side of the lock, empowering lock operators to pass over untimely vessels on queue, and systematizing the use of assist boats.

Following that August 10 meeting, Marine Safety Unit Port Arthur, Texas, issued Marine Safety Information Bulletin 06-18 (MSIB), which set traffic management procedures at Calcasieu Lock. The MSIB established a staging area from the lock to Devil’s Elbow (Mile 239) on the west and from the lock to Grand Lake (Mile 234) on the east. The bulletin limits the staging area to 12 vessels and tows. Once half the vessels in the staging area have cleared the queue, the next six vessels may move in. The MSIB also empowers the Calcasieu lockmaster on duty to move a vessel to the end of the staging area queue if that vessel is uncommunicative or delayed. It also requests vessels to use the next available assist boat.

“If they are unable or unwilling to take the next available assist boat, the lockmaster may allow all other vessels to lock through ahead of the delayed tow,” the MSIB says.

“I believe some of the measures the Corps, Coast Guard and industry have implemented as a result of our meeting last week have helped to improve locking efficiencies—going six hours each way during the evenings and 12 hours each way on the weekends in particular,” said Jim Stark, president of the Gulf Intracoastal Canal Association. “Also, the establishment of staging areas has helped. I have asked industry to remain focused on being ready and in position when called, make best safe speed when locking, and make full use of available assist boats. The Corps is passing over tows not ready to go. Locking times averaged about 31 minutes the past two nights.”

Although progress has been made of late, significant challenges remain ahead for the Corps and industry alike. With the winter season will come bitter winds out of the north, which will push tows—especially empty barges—toward the south end of the lock. Harvest season will also drive up the number of six-pack tows carrying grains through the constricted lock chamber. The school year could also present a challenge for towboat traffic moving through Calcasieu, because a swing bridge at the east end of the lock gives preference to bus traffic.

Caption for top photo: Deloach Marine Services’ mv. Poseidon assists a tow through Calcasieu Lock August 9. The “can opener” is on the right. (Photo by Frank McCormack) 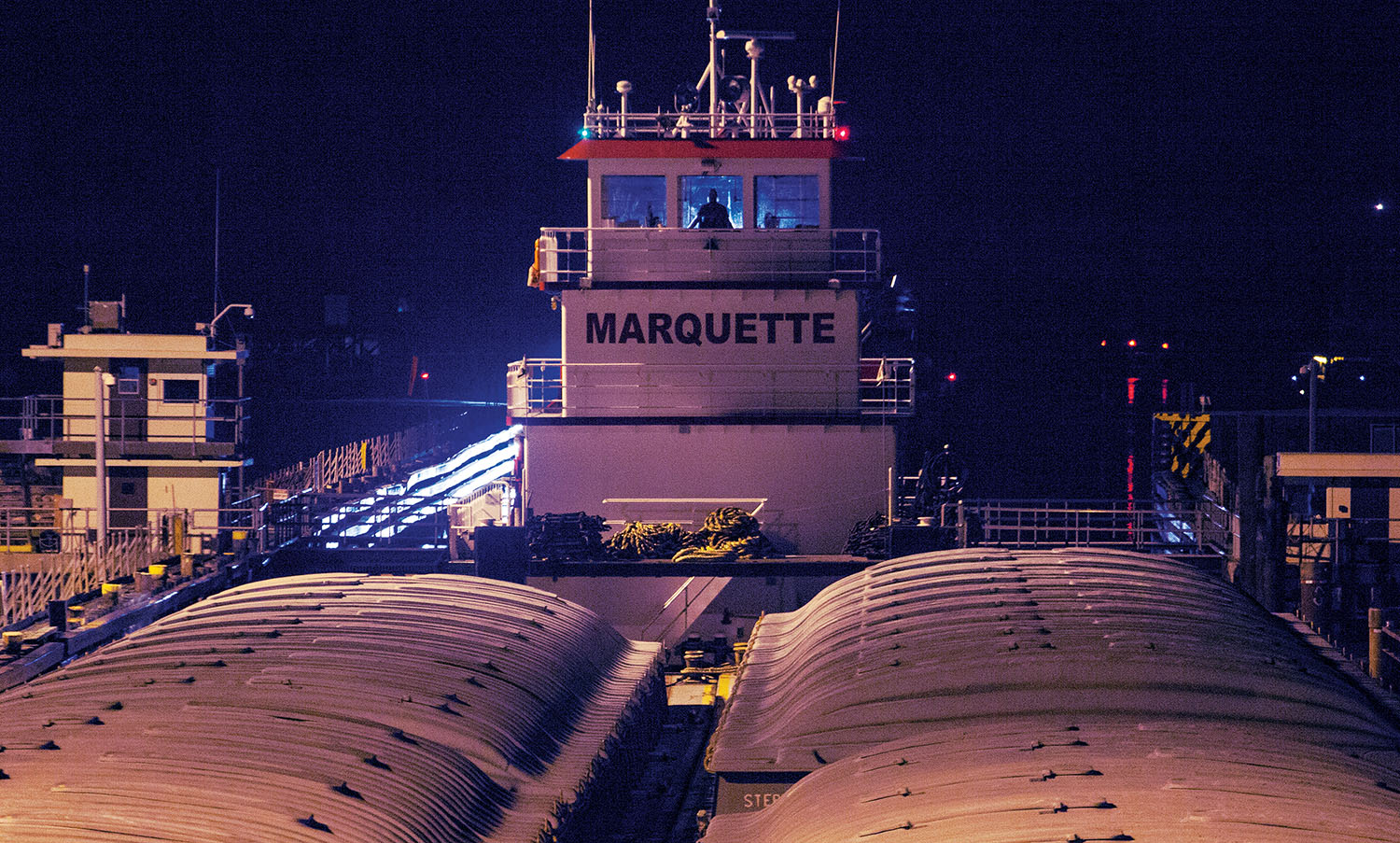 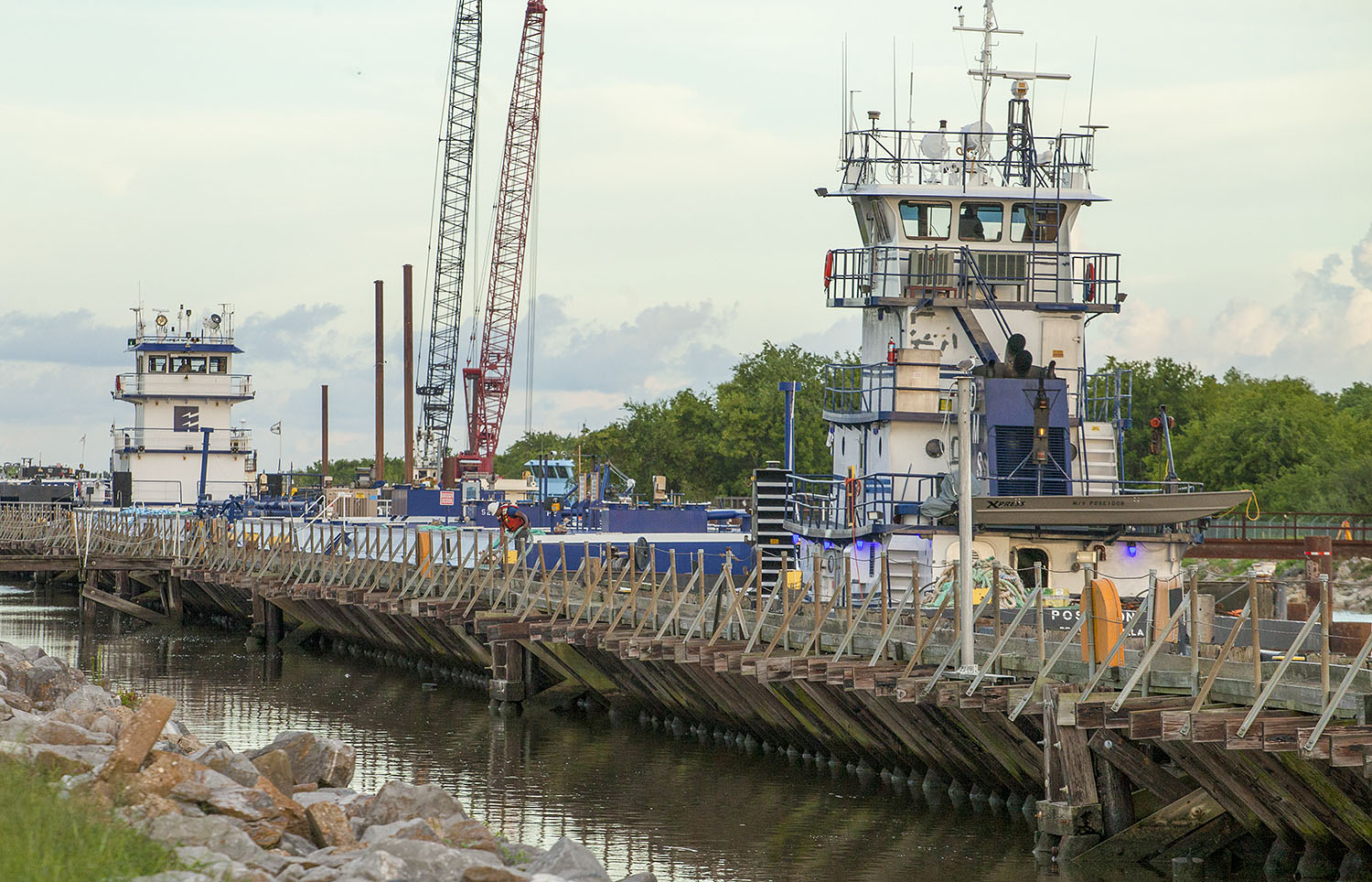 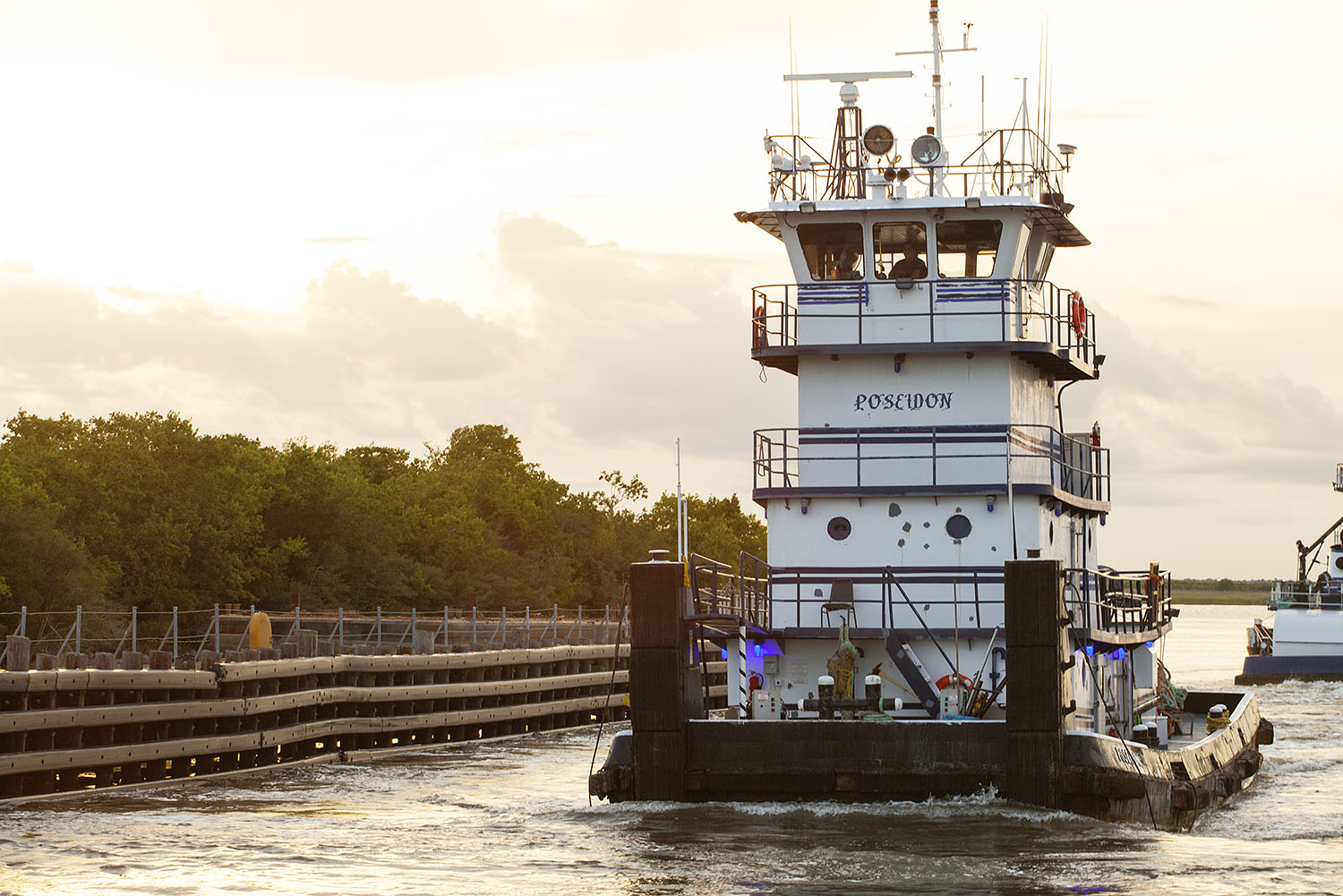 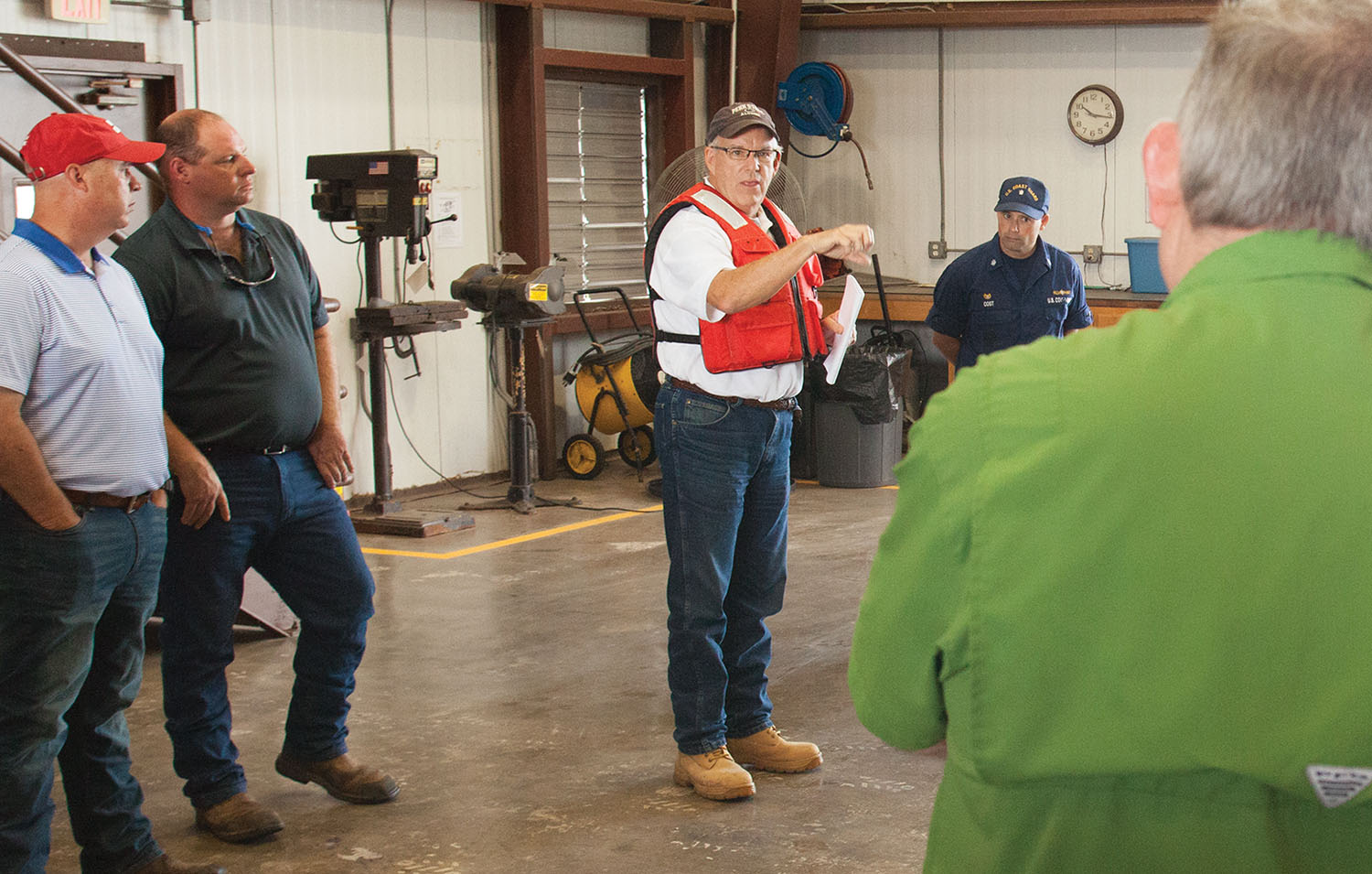 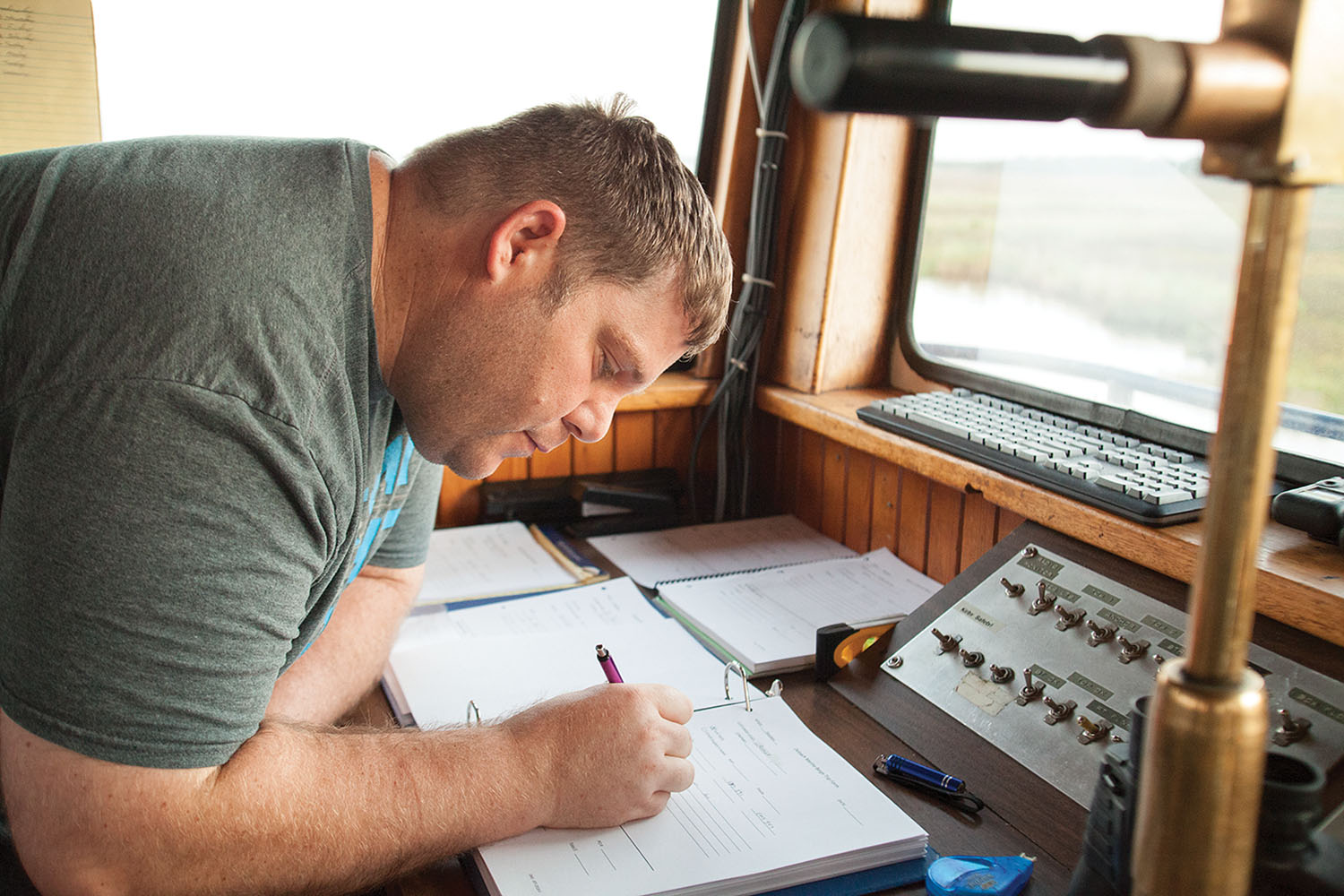