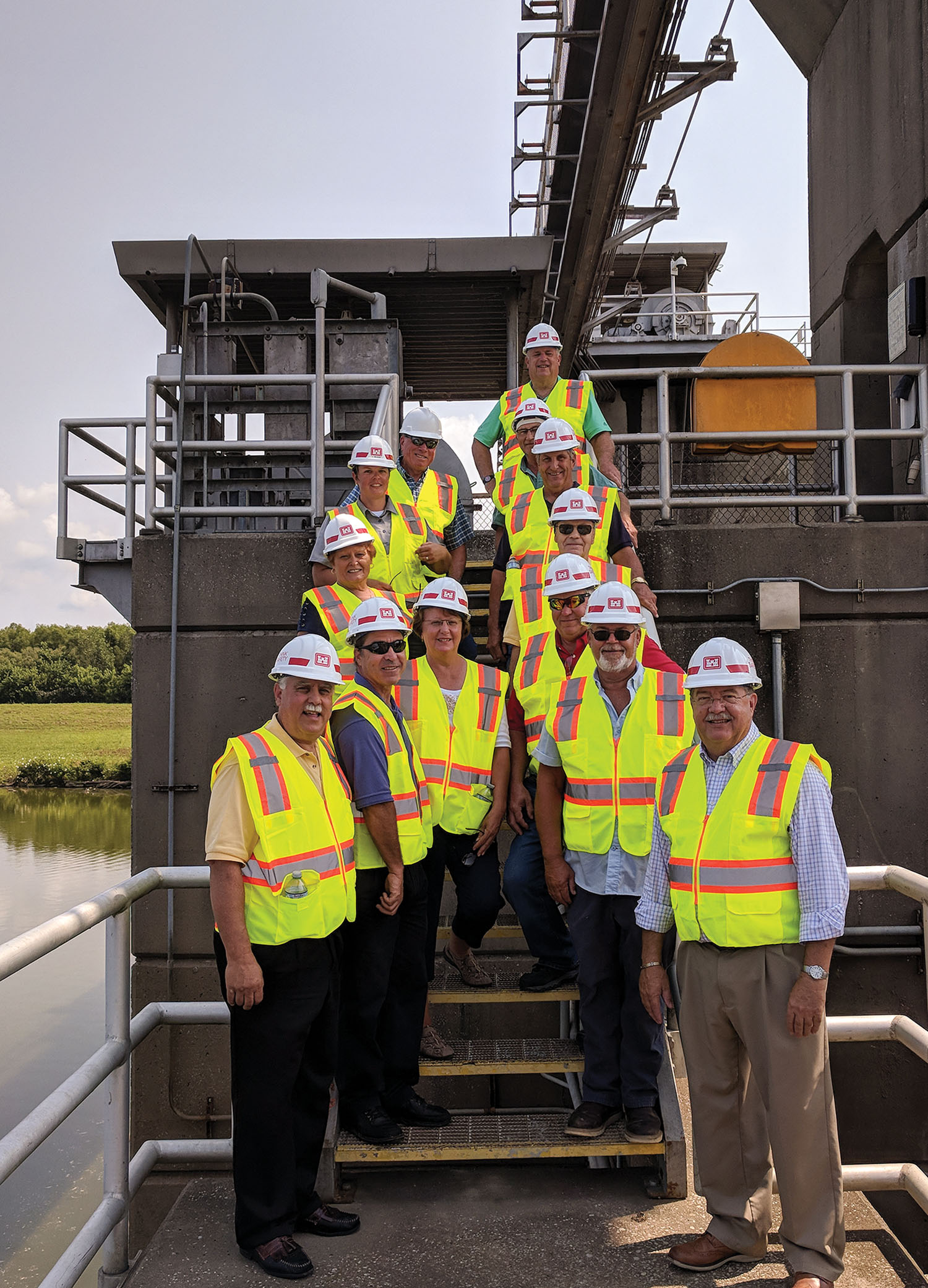 The Kaskaskia Regional Port District (KRPD) recently toured the dewatering of the Jerry F. Costello Lock on the Kaskaskia River. In its 44 years of operation, this is the first time that the lock has been completely dewatered for a thorough inspection. The lock was closed to all traffic beginning August 6; the closure is expected to last through August 26.

Courtney Wilson, assistant project manager for the St. Louis Engineer District, led the KRPD board on a tour that included the totally dewatered chamber. Crews were replacing timbers on the gates as board members toured. Wilson also informed KRPD of another critical need that has been approved for funding:  the repair of the upstream scour.

“I am very pleased with the efforts of the Corps to maintain the lock and dam on the Kaskaskia River,” said KRPD Board Chairman George Obernagel. “This lock is critical to the nation in that it supports two power plants and a host of businesses at terminals on the river.”

The Corps has been working with all the users of the river to get ready for this extended closure. Preparation began last year to schedule cargo and stage commodities upstream to be ready for the closure.

The lock and dam were placed into operation in 1974. Since then, more than 62.7 million tons of cargo have been shipped on the Kaskaskia River. For most of its history, coal was the major cargo. Coal cargoes dropped precipitously in the early 2000s, but cargoes of grain and processed specialty steel have risen. Tonnage on the Kaskaskia River has been steadily increasing each year. The cargo shipped today is a diverse mix of grain, scrubber stone, slag, coiled steel, frac sand and fertilizer. Last year, more than 1.5 million tons were locked through.

The KRPD also announced August 15 that it has agreed to a grant award from the Illinois Department of Transportation (IDOT) to develop a master plan for the terminal at KRPD Terminal No. 2 on the Kaskaskia River.

The KRPD said recent expansion from terminal tenants Gateway FS and The Material Works (TMW) has also placed a greater demand on the port’s infrastructure. The expansion plan is needed to address congestion and cargo movement at the two docks, and to incorporate the 8 acres the district purchased last year to install a third dock. There is a need for a third dock to handle the increasing cargo movement through the terminal.

The $90,000 planning grant needs to be matched with $30,000 from the port. Requests for qualifications will be sent out shortly to select a consultant to work with the port on the master plan.

The KRPD thanked Marc Kiehna, Randolph County commissioner, for helping to provide a lead to the port as to the possibility of a planning grant. A proposed four-lane highway may come near the KRPD No. 2 location.

The Kaskaskia River arises in central Illinois and flows southwest for about 325 miles, joining the Mississippi River northwest of Chester, Ill.

The Kaskaskia Regional Port District is the 71st largest port and the ninth-largest inland port in the country.

Caption for photo: Board members from the Kaskaskia Regional Port District Tour the Jerry F. Costello Lock and Dam during dewatering.