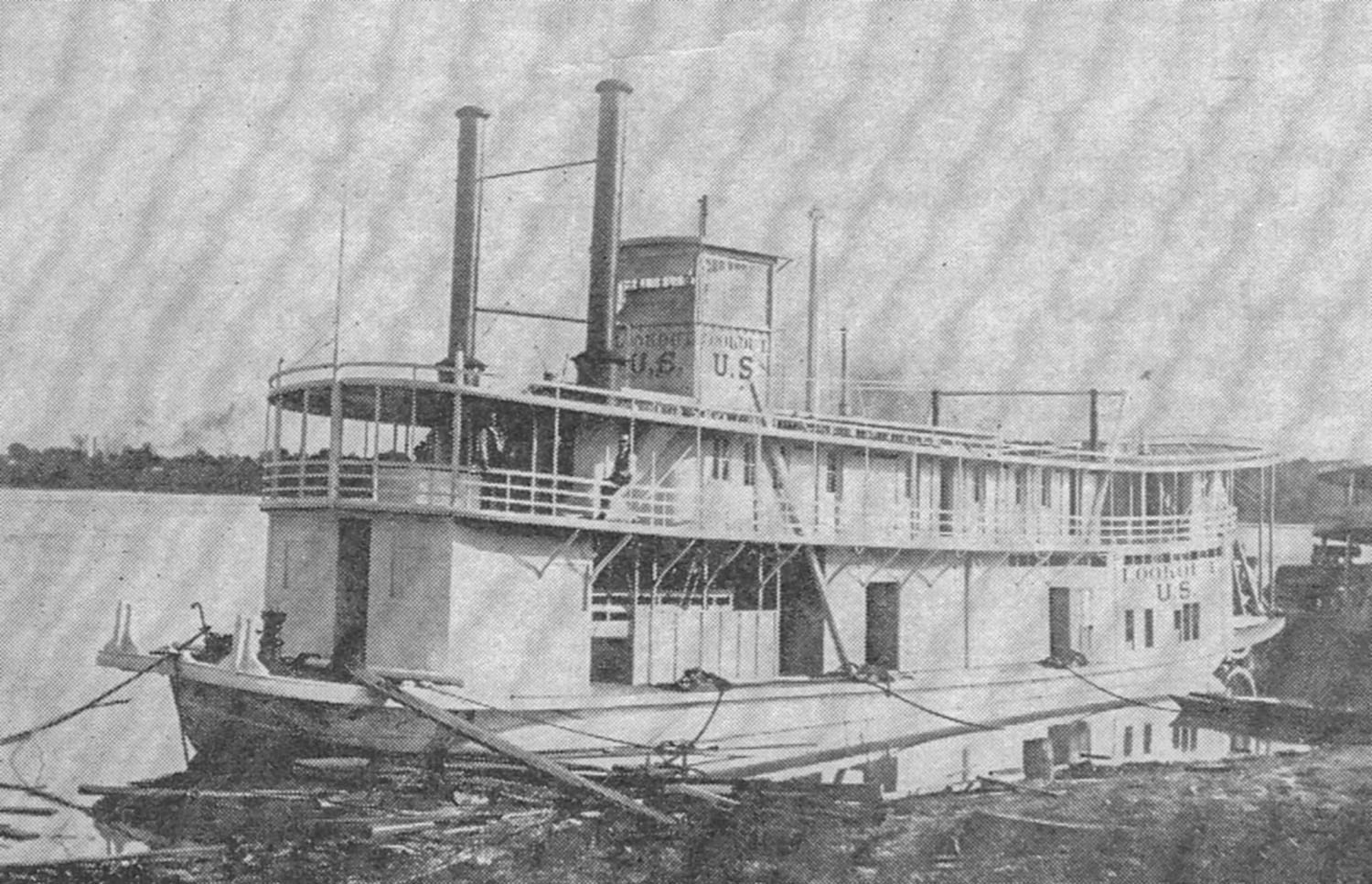 Capt. Jim Howard, with his trusty glass plate negative camera (now exhibited at the Howard Steamboat Museum) took this week’s Old Boat Column image, as the towboat Lookout was being completed by the Howard Shipyard at Jeffersonville, Ind., in 1896.

Built for a contract cost of $9,000 for the U.S. Army Corps of Engineers, the sternwheeler was constructed on a wood hull that measured 110 feet in length by 25 feet in width. The vessel operated on the Tennessee River and was based at Chattanooga, Tenn. The Lookout was rebuilt in 1915, with the hull lengthened to 137.7 by 25.6 feet.

Two outstanding construction peculiarities evident in the 122-year-old photograph, of an otherwise ordinary riverboat, are the roof extension over the sternwheel and the king post protruding up amidships, higher than the pilothouse. The king post style of support on a wooden hull was successfully used on the steamboats of the Columbia River and Puget Sound. It was adopted for a brief period (1850–1865) on Mississippi River sidewheelers, but met with failure; the tendency aboard a shallow flat-bottomed hull was for the pole to shove down through the bottom of the boat. No documentation has surfaced that explains why the boat was built this unique way in the late 1890s. Upon close examination of the photograph, the rods emanating from the top of the post don’t pick up down through to the steamboat’s hull, Rather, they attach to the roof and this makes one wonder if the post might have been planted for a reason other than support; perhaps for pulling barges behind on a line. Any ideas, towboaters?

Under the command of Capt. Ive Thompson, the Lookout sank in May 1906, seven miles below Knoxville, but was raised, repaired and returned to service. It was retired in 1923 and replaced by a new towboat of the same name in 1924.

Constructed by the Ward Engineering Company at Charleston, W.Va., the new Lookout had a steel hull measuring 136.6 feet in length by 29 feet in width. The compound engines had cylinders of 10 inches and 18 inches with a 6-foot stroke. Also owned by the Army Corps of Engineers, the boat originally worked the Tennessee River, but was later transferred to Pittsburgh, under the command of Capt. R.J. Hiernaux. Shortly after the transfer in 1927, the vessel’s name was changed to George S. Nutt.

Museum Fundraiser
For the Howard Steamboat Museum’s fall fundraiser, the second annual car show will be held on the grounds of the museum, 1101 E. Market St. in Jeffersonville, Ind., on Saturday, September 15.

In case of rain, the show will move to Sunday. Co-sponsored by Clark Memorial Hospital, the free-admission event will include various classes of vintage autos, as well as raffles, food booths in the newly restored carriage house, and a beer garden. Tours of the museum will be offered at a reduced rate of $5 per person.

For further information or to register a car, contact Travis Vasconcelos at 812-283-3728 or visit www.
HowardSteamboatMuseum.org.