The Olmsted Locks and Dam Replacement Project, formally inaugurated on August 30, is already being put to work. Lock managers began raising wickets the next day in order to build the pool at Olmsted, so that the deconstruction of Dam 53 could continue.

By September 5, according to an email from Louisville Engineer District Deputy Chief of Operations Wayne Humphrey, the Olmsted tainter gates were in position at water level for staff to begin executing planned reductions beginning that evening and continuing into the next day.

The river was closed at Locks and Dam 52 (Ohio River Mile 938.9) starting at 9 a.m. September 6 for what was expected to be about 48 hours as project personnel lowered the wicket dam and transitioned the pool to Olmsted.  The L&D 52 navigation pass was to be open to traffic again once the Olmsted pool stabilized.

On August 30, a band played as attendees gathered under a pavilion for the ceremony and ribbon cutting, which was hosted by Col. Antoinette Gant, commander of the Louisville Engineer District.  Gant opened by saying, “This project reflects the hard work and dedication of an incredible team. I am proud of the Louisville District employees and contractors, who have given of themselves to bring this project to fruition.” Gant had union members stand for applause, then all those who had spent their careers on the project.

The first item was a video featuring many of the workers who built the project, including the late James Keen, the former chief of contract administration on the Olmsted Locks and Dam project, who died in 2016. As part of the ceremony, Olmsted’s wicket boat, named for him, was christened by members of his family. Other featured workers include John Allison, the project’s first project engineer, geotechnical engineer Marcella Denton and business manager Cathy Priest. The video ended with a group shout of “We are Olmsted!”

Kevin McLaughlin, a project director at AECOM, the consortium of contractors that built the project with the Corps said, “From the beginning, we knew that safety, innovation, planning, communication and our people would be critical for this project. As a contractor, seldom do you have the opportunity to work on a once-in-a-generation and, for some, a once-in-a-lifetime project like this, where the challenges were met by a united workforce. I marvel at the things the American spirit can accomplish.”

Mike Toohey, president and CEO of Waterways Council Inc., spoke on how the 2014 passage of the Water Resources Reform and Development Act plus an amendment to a water and energy bill, developed and passed with the help and leadership of the barge industry, was the turning point of the project, securing it “full and efficient funding.”

“We expected to be standing here four years from now after spending another $330 million,” he said. Toohey said the project is expected to deliver an estimated $650 million worth of benefits each year of its life—for a benefit/cost ration of 8 to 1—enabling it to pay for itself in a few years. Toohey said the project should be named the Mitch McConnell Lock and Dam, because of McConnell’s importance in forwarding the project.

Marty Hettel, chairman of the Inland Waterways Users board and vice president of government affairs at American Commercial Barge Line, said the failures of Locks 52 and 53 over the past 10 years have imposed costs of about $75 million on shippers.

Lt. Gen. Todd T. Semonite, chief of engineers and commanding general of the U.S. Army Corps of Engineers, praised the “dreamers and doers empowered by vision and technology” who designed and built the project. He said the Olmsted experience has contributed to a Corps “culture of accelerating projects” and promised that “lessons learned here will be applied to Chickamauga, the Lower Mon and Kentucky projects.”

By the time Sen. Mitch McConnell (R-Ky.) took the podium with the words, “What a glorious day,” he had already heard Rep. James Comer, representing Kentucky’s First District, say that McConnell’s name should be on the project, as did Sen. Dick Durbin (D-Ill.), a key supporter of the project with McConnell.

Durbin said the project’s completion marked “a rare moment when a river will bend to the hand of man.” He paid tribute to past supporters of the project, including former Illinois congressman Kenny Gray, who conceived of a lock and dam at the site in the 1950s, and to Connell Smith, who led Laborers Local 773 in southern Illinois from 1942 through 1976.

R.D. James, assistant secretary of the Army – civil works, noted that the U.S. boasted more miles of navigable waterways than the next top five countries combined, along with more miles of fertile farmland adjacent to them than anywhere else.

Finally, Mark Esper, secretary of the Army and a former executive at Raytheon Corporation, paid tribute to James Keen and noted that the first wickets were raised on Keen’s birthday, June 13.

The mv. Glenn W. Jones, operated by ACBL, was the first boat to pass through the open lock after the ceremony. 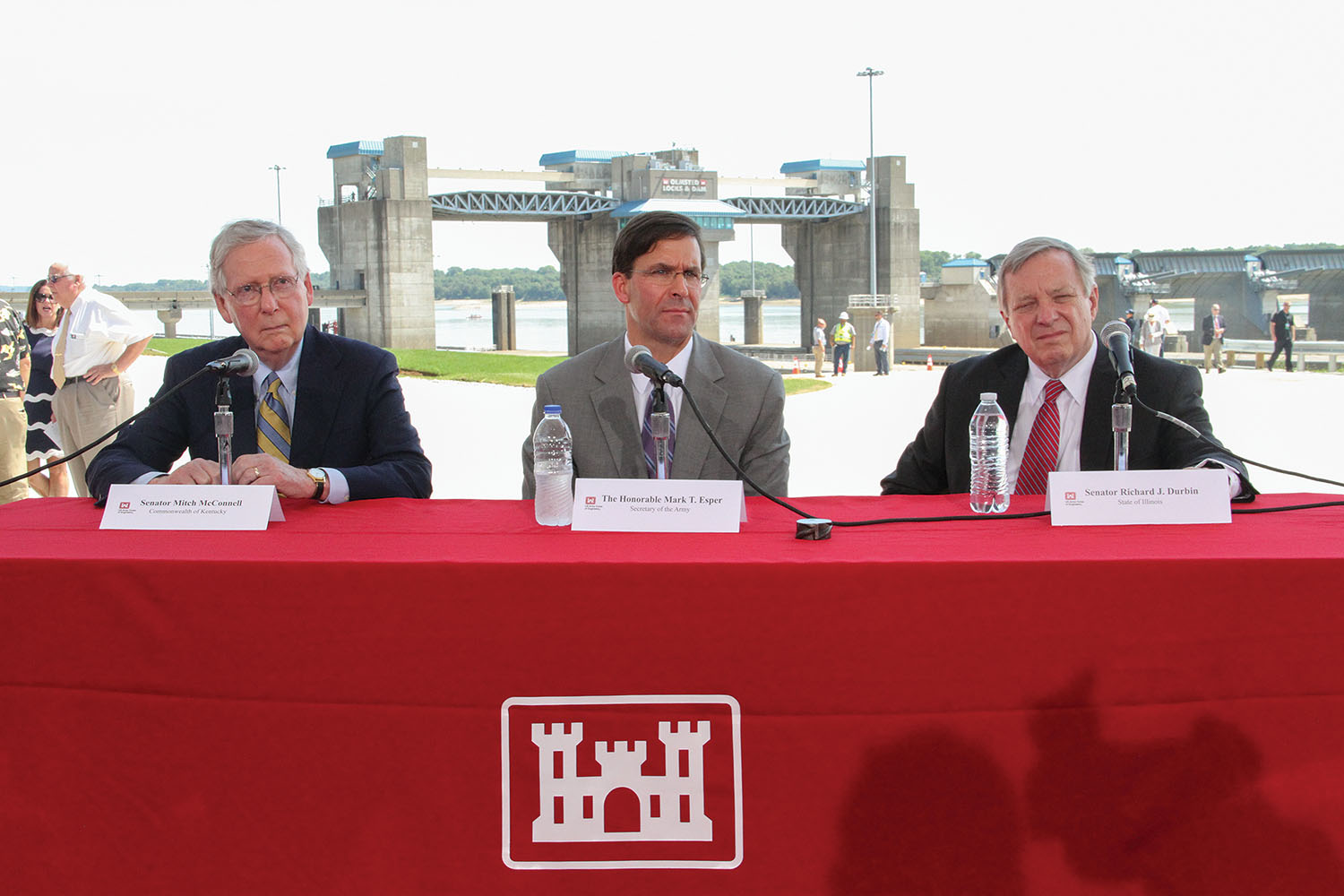 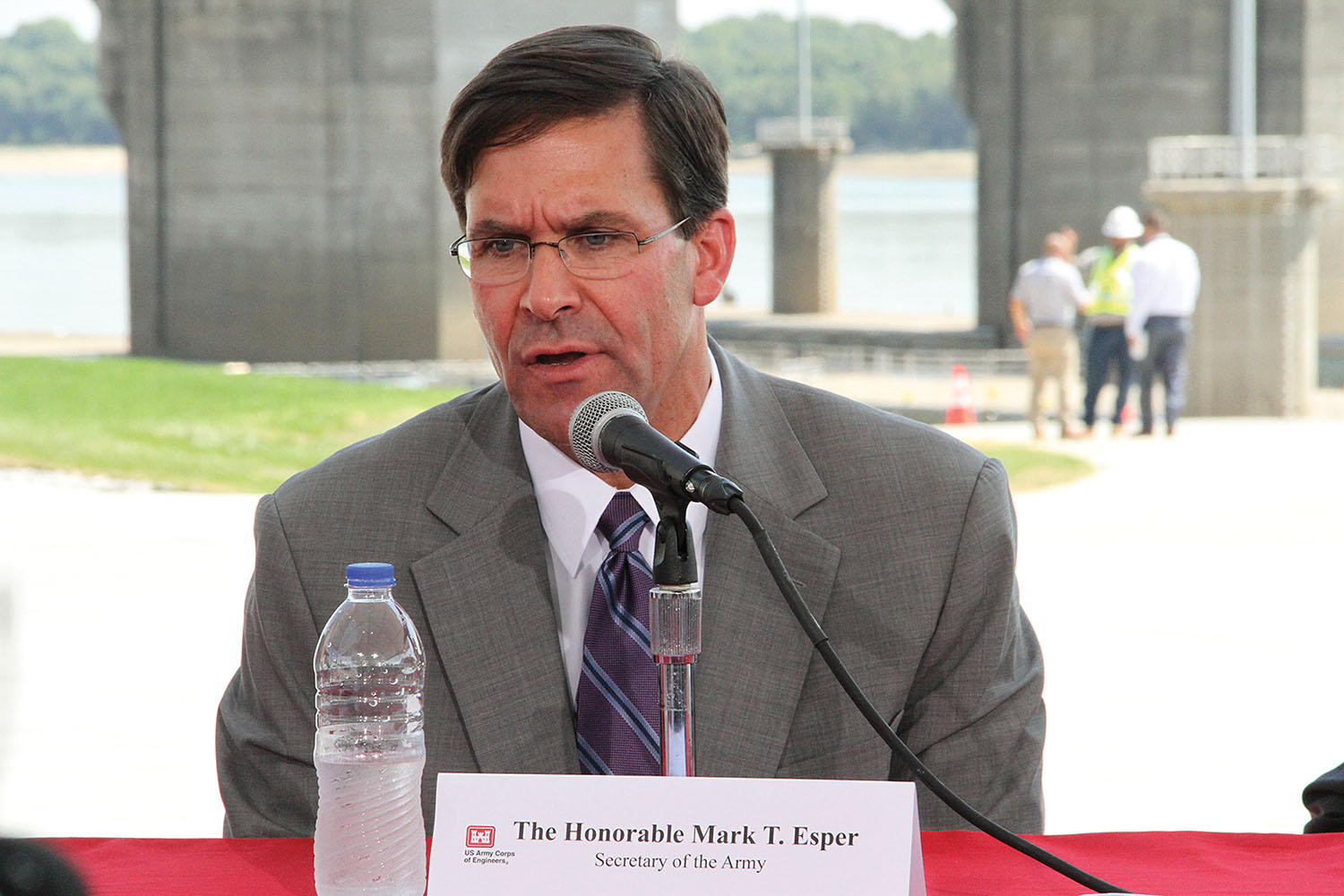 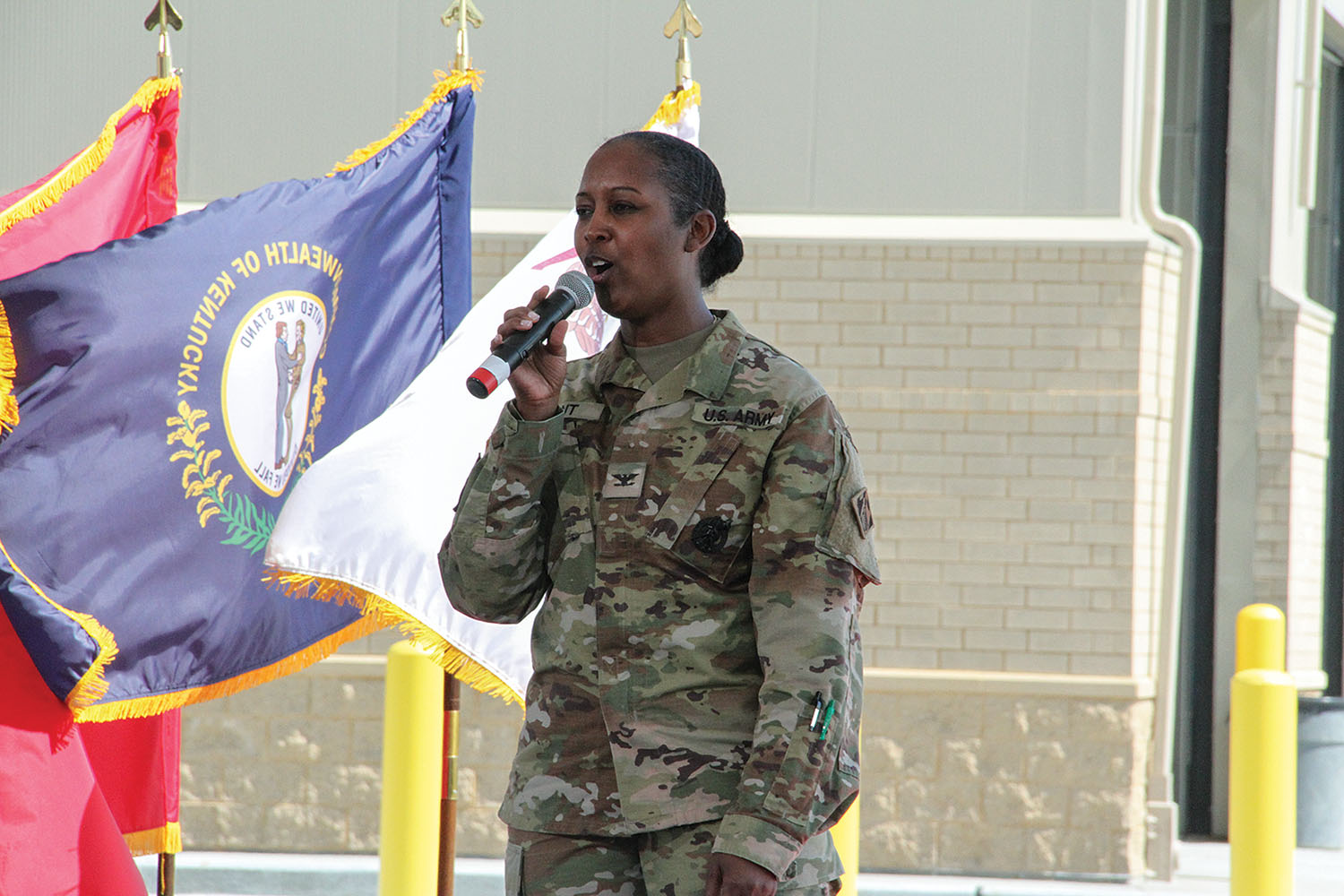 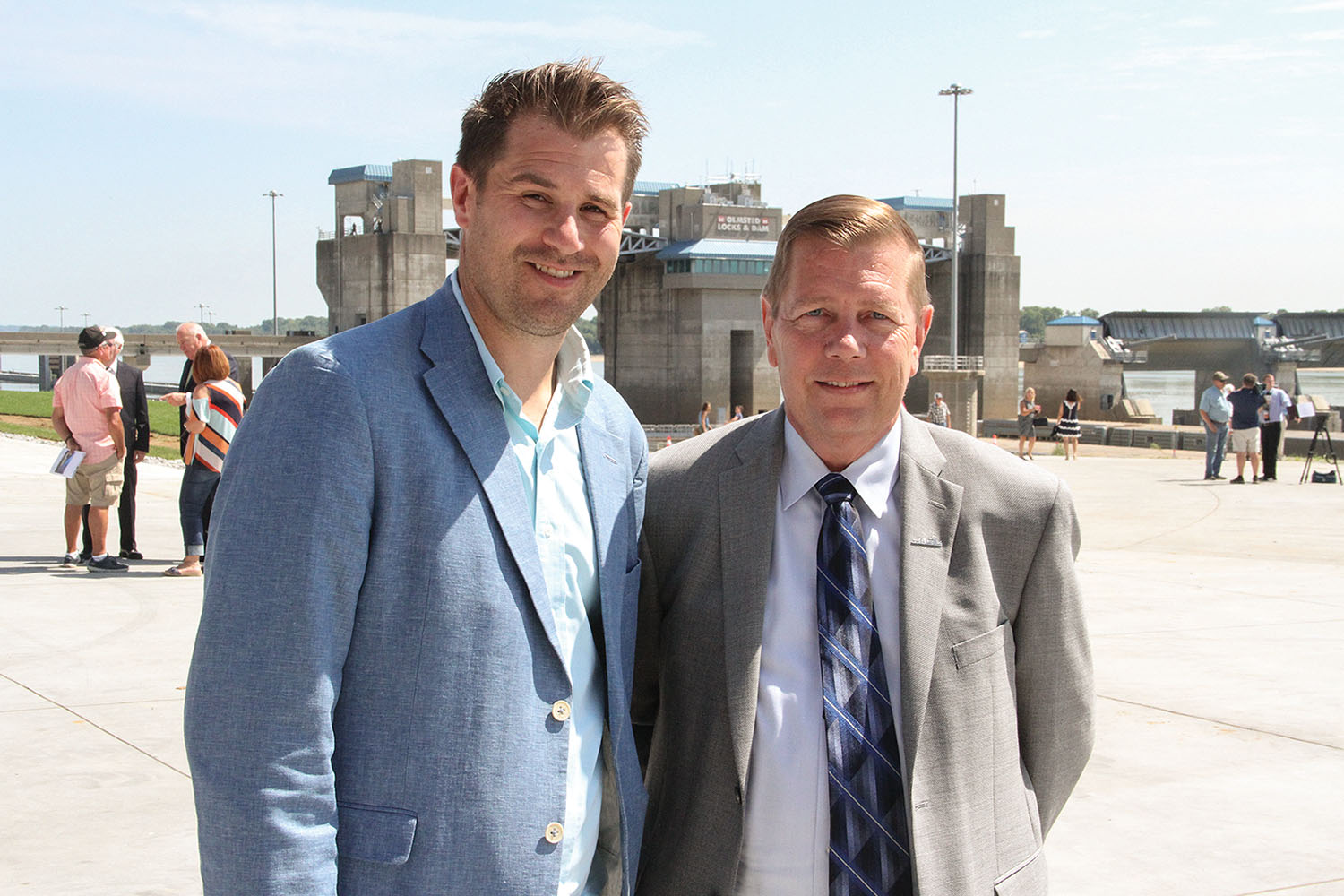 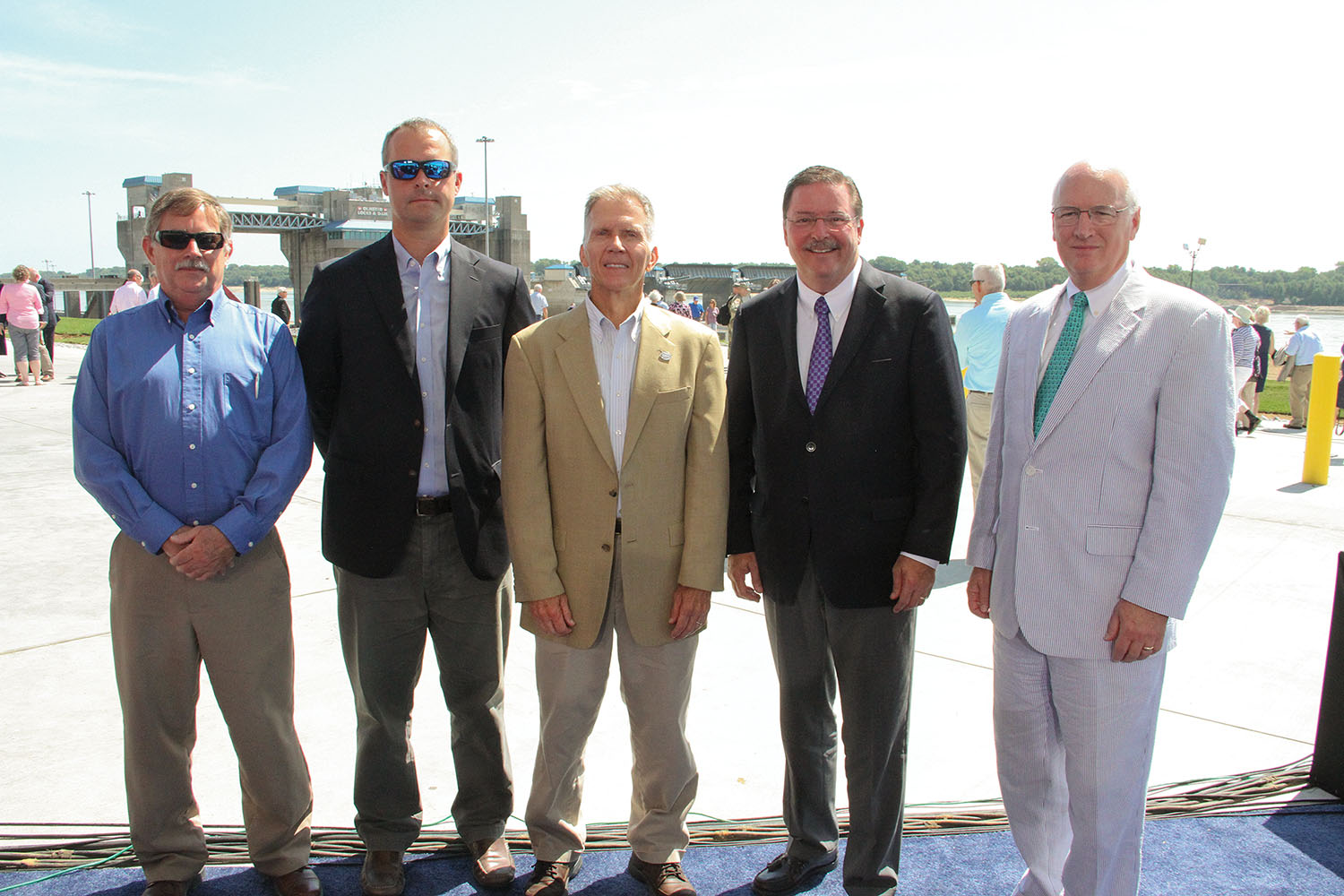 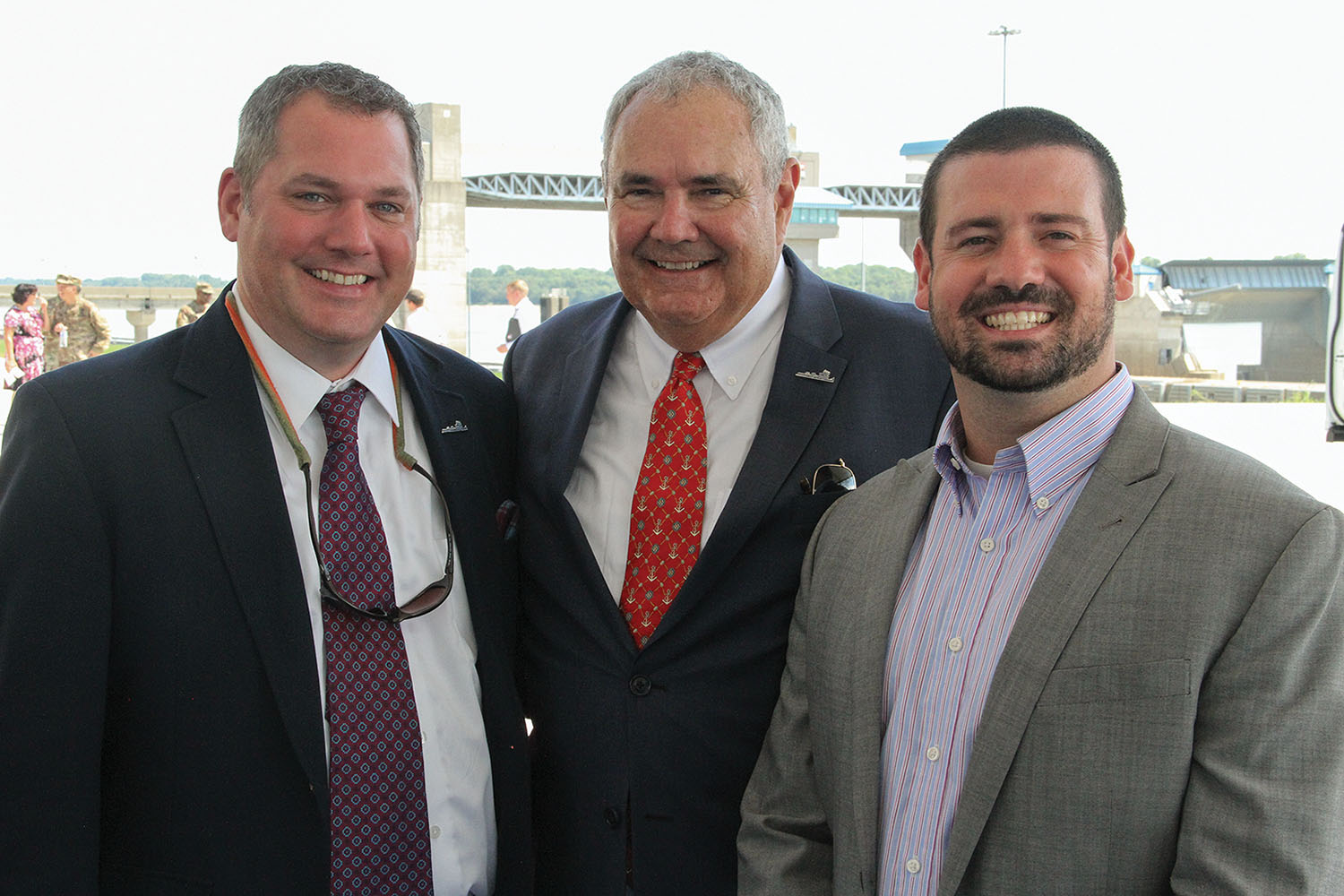 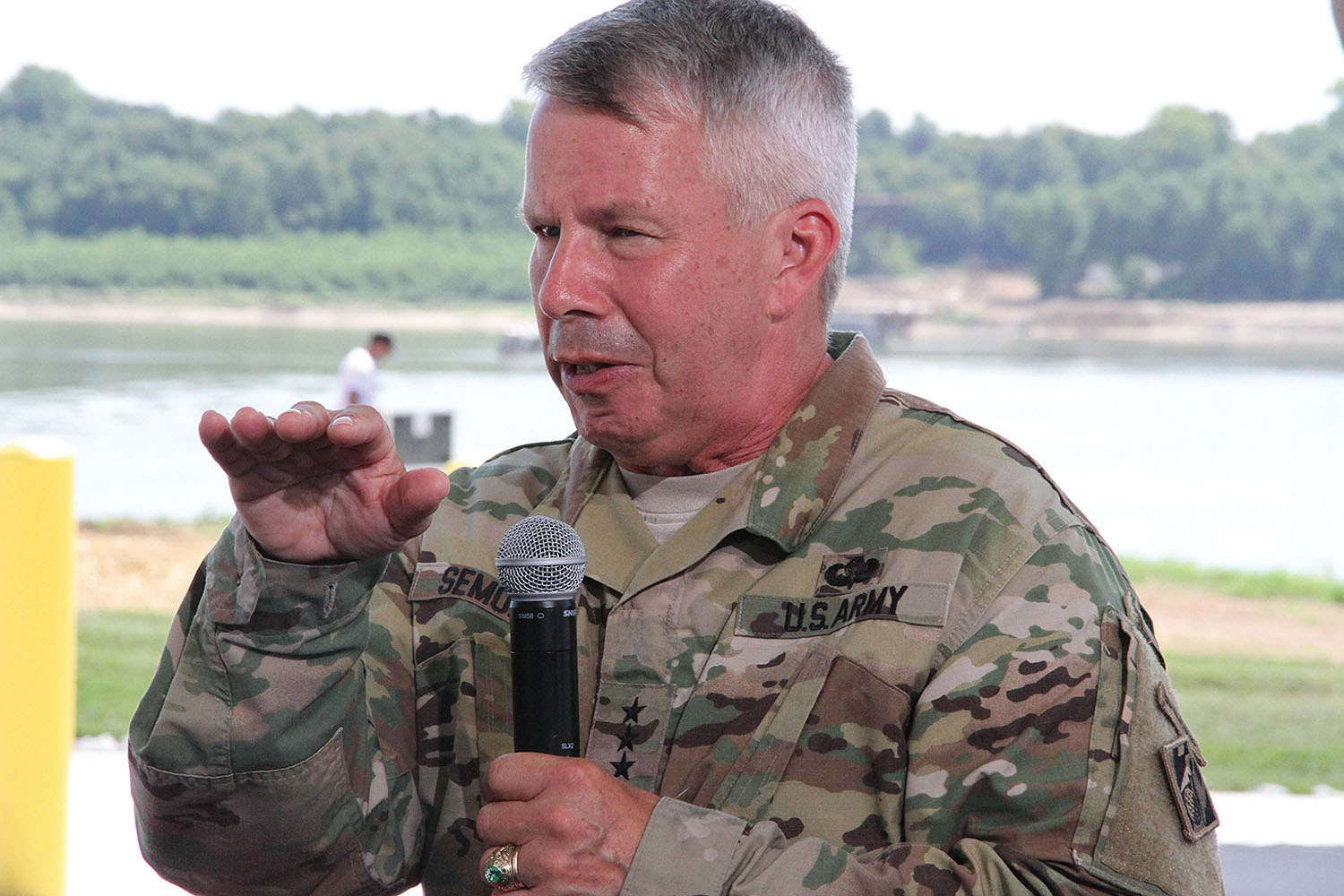