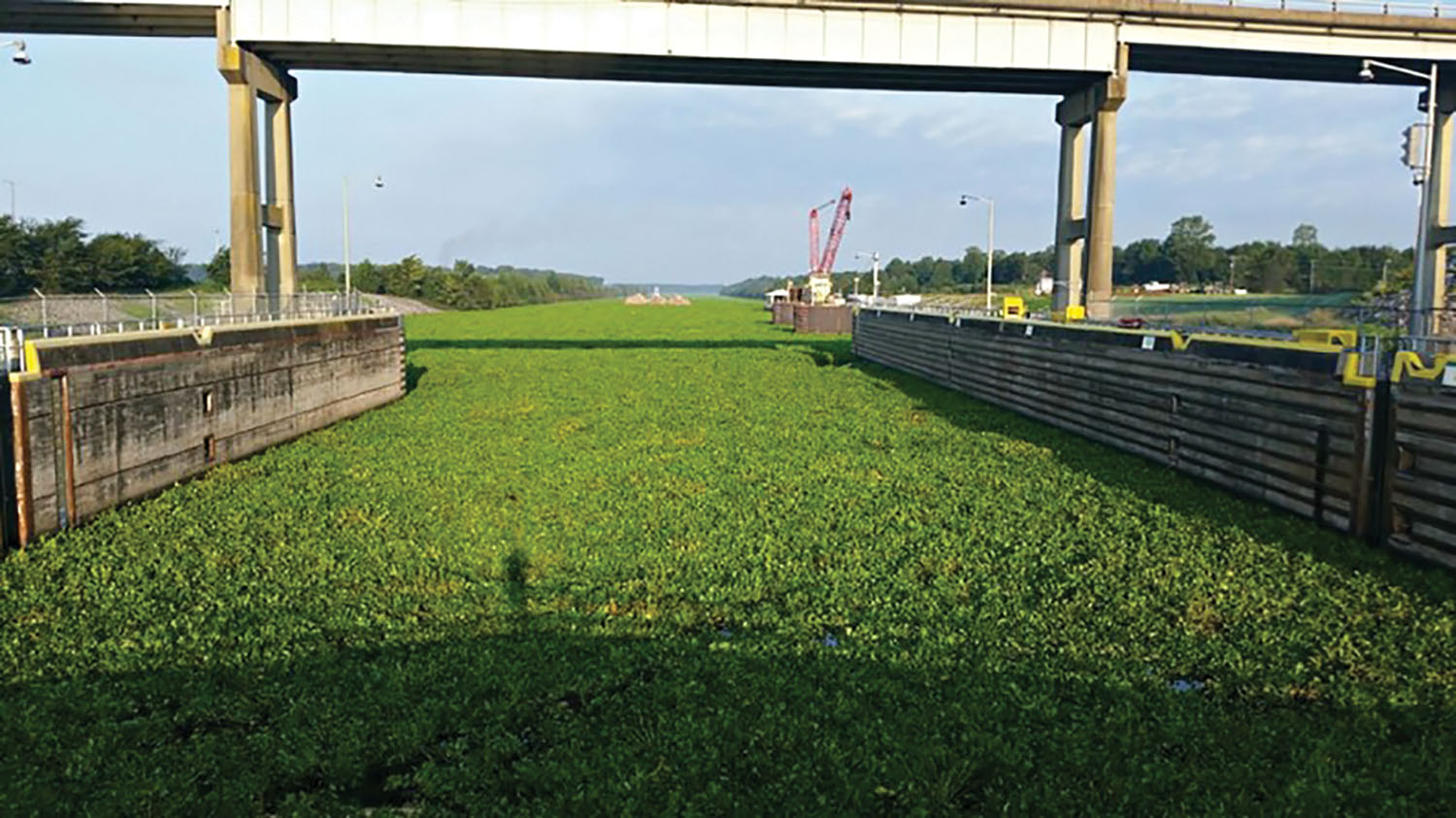 The Arkansas-Oklahoma Port Operators Association (AOPOA) is made up of more than just the two states in its name. Kansas, Missouri, Colorado and Texas also have a stake in the McClellan-Kerr Arkansas River Navigation System (MKARNS). Representatives from the six states met to discuss waterways issues at the Hard Rock Hotel and Convention Center in Catoosa, Okla., September 5-6.

Members of the Corps, Coast Guard, Arkansas Waterways Commission, state economic development agencies, the Oklahoma Department of Transportation, various port operators and others focused their attention on a variety of navigation issues that impact public and private ports along the waterway.

Recently, AOPOA has expanded its membership to be more inclusive of those who benefit from the MKARNS. “With the selection of speakers and topics addressed at the 2018 AOPOA annual meeting and MKARNS Navigation Workshop, we felt like this was a breakout year,” said Kimbra Scott, manager of AOPOA. “We delivered what our membership asked for, which was educational initiatives on what can be done legislatively to obtain funding to address infrastructure concerns on the waterway and also takeaways of information that can be used in their respective terminals, ports, private facilities or economic development agencies to help diversify their reach.”

Scott said that over the last year, AOPOA members entered into a contract with a Washington, D.C., lobbying firm to represent and advocate for the maintenance and improvements of the MKARNS. “AOPOA encourages and endorses the support and allocation of resources that enhance the viability and competitiveness of the waterway to include deepening the navigable channel to 12 feet and ensuring the continued reliability of the system by overcoming the backlog of critical maintenance,” she said. “We also are addressing and correcting threats to navigation, such as the Three Rivers area at the confluence of the Arkansas, White and Mississippi rivers. AOPOA supports and promotes the need for adequate funding of the Corps to maintain and enhance the reliability of the waterway.”

The lobbying firm Van Scoyoc Associates was hired by the Port of Little Rock (Ark.), an AOPOA member, to represent MKARNS interests (WJ, July 9, 2018). While the port’s board of directors agreed to the port being the official contracting agency, other agencies, entities and interests along the river system said that they will donate money and resources to the cause. These organizations include the Arkansas River Coalition and AOPOA.

Individual companies, many of whom are members of AOPOA, are also advocating for the success of the river system. Mark Knoy, president and CEO of American Commercial Barge Line, presented on the importance of three river systems working together to improve commerce on the waterways. Those three systems—the Tennessee-Tombigbee Waterway, J. Bennett Johnston Waterway and the MKARNS—encompass hundreds of miles of commercial navigation and billions of dollars in business. Despite this, Knoy said the systems need continued funding and maintenance.

He said it is up to the industry to work together to accomplish its goals of better funding and infrastructure improvements. “We are to blame, because we put up with it,” Knoy said regarding the 240 locks in need of upkeep and major repairs and the fact that operations and maintenance has been reduced and underfunded.

A solution, proposed by Knoy during his presentation, is to complete legacy projects, prioritize projects for future investment and find congressional champions.

At the request of the Arkansas Waterways Commission, the Corps has been conducting the Three Rivers Feasibility Study, which recommends modifications to the MKARNS that will ensure the long-term sustainability of its reliable navigation.

The Three Rivers system includes a series of structures that separate the waters of the White River from the Arkansas River and keep its channel connected to the Mississippi River via a 10-mile-long canal built 20 years after the opening of the MKARNS. Periodic high water damages these structures.

During high-water events, water backing up the Mississippi can create significant head differentials between the Arkansas and the White rivers. The existing containment structures are subject to damaging overtopping, flanking and seepage that could result in a catastrophic breach, according to the Corps.

In 2005, the Corps undertook the Arkansas-White Cutoff General Re-evaluation Study (Ark-White Study) to address this issue; however, in 2009, the Corps recommended the “No Action Alternative” and the study was terminated. The Corps said that it was unable to identify a long-term solution that was environmentally acceptable under authorities and funding available at the time.

However, a feasibility study on Three Rivers was completed recently and the Chief’s Report was signed and added in the 2018 Water Resources Development Act. Deidre Smith, director of the Arkansas Waterways Commission, said the study fell under the “3x3x3 rule” created with the Water Resources Reform and Development Act of 2014. The 3x3x3 rule, which means a study must be established within the framework of three years, $3 million and with three levels of vertical team engagement, is not a strict rule. Instead, the Corps said it is a policy established to provide benchmarks that would apply to most feasibility studies.

Smith said that the Arkansas Waterways Commission was the sponsoring agency for the state of Arkansas, which paid a $1.5 million cost-share for the study with the Corps.

Marty Shell, president of AOPOA and of Five Rivers Distribution in Fort Smith and Van Buren, Ark., said that the association and many other states that utilize the MKARNS depend on the maintained and navigable waterway to import and export cargoes. “We as a nation need to reinvest in our waterways for the most economical way to move a freight-ton per mile and avoid deteriorating our highway system with heavy trucks that cost our taxpayers additional money in roadway repairs,” said Shell. “The river can handle all of that at a fraction of the cost.”

This program provides funds for public ports and intermodal authorities to make capital improvements and allows for much needed dredging projects. The four ports to receive grants include the Fort Smith Port Authority for the completion of a 30,000-square-foot bulk storage facility; Little Rock Port Authority for the construction of a secure, 4.14-acre outside storage yard to expand upon its existing storage area and to install a perimeter fence with gates; Osceola Port Authority to secure its dock and repair and upgrade conveyors; and White River Regional Port Authority to advance with phase 2 of a three-phase process to construct access to the port site.

“This grant program increases Arkansas’ competitive advantage on the nation’s inland river system to entice increased waterborne commerce for the navigable rivers in Arkansas,” said Smith. “The waterways are an economic driver for the state and water transportation is the most cost-effective, safe and environmentally friendly mode of shipping bulk and oversized cargo.”

The grant was established by Act 1483 of the 89th General Assembly.

J.W. Misenheimer, an administrative analyst with the Arkansas Waterways Commission, presented an overview of the invasive water hyacinth plant that is quickly spreading throughout the MKARNS. Misenheimer said that he is working closely with the Corps to create an educational outreach video concerning the invasive species, with the slide presentation put together by Cherrie Phillip, a conservation biologist with the Little Rock Engineer District. Philip has been working with the commission to combat the invasive species issue.

The plant, which is native to the Amazon basin in South America, was introduced to the United States in 1884 during an exposition in New Orleans. The attractive-looking plants were sold and quickly spread throughout the water system. In May 2006, the State Plant Board added the water hyacinth to its list of noxious plants.

Last summer, the water hyacinth had taken over Lock and Dam 2 on the Arkansas River at Tichnor, Ark. Phillip said the plant can and has caused wear and tear on lock gates.

“The plant can grow into large matts that can cover an entire area, thus damaging the lock gates,” said Phillip. To combat this issue, she said that the commission and the Corps has implemented a multi-tiered, cyclical management plan. The plans include prevention, early detection and rapid response (EDRR); control, eradication and restoration; coordination and cooperation, education and outreach, and repeating these steps. “Prevention keeps the invasive species from entering a new ecosystem, and it’s the most cost-effective strategy,” added Phillip. “EDRR requires dedication and vigilance, but it’s necessary to eradicate these organisms, if feasible, before they have the opportunity to establish in a new location or cause harm.

In his presentation, Misenheimer said that the Corps is in the control and eradication phase of the plan. “Control programs are necessary when populations become so well-established that eradication is no longer logistically or economically feasible,” he said. “Integrated approaches, such as mechanical, biological, chemical control and prescribed burns, may be necessary.”

When possible, Misenheimer said ecosystem restoration is implemented as the fourth aspect of the plan to minimize the spread and impact of the invasive species. Native organisms are added to the area once taken over by the water hyacinth.

“The biggest hurdle in implementing the strategic plan,” said Phillip, “is educating the public and other agencies on invasive species.” In addition to the water hyacinth, which chokes navigation, dams and water supply lines in addition to damaging lock gates, zebra mussels and alligator weed have also wreaked havoc along the MKARNS.

“Our education strategy has been to use interpretive programs at schools and visitor centers,” said Phillip. “We also create public service announcements and YouTube videos, and we update websites with useful invasive species prevention information.”

Outside of the management plan, Phillip said that in July, a beetle release was conducted at four locations at Lock 2. The parasitic insects feed solely upon water hyacinth plants. Next year, Phillip said a chemical vegetation management contract will be put into place, in which water hyacinth infestations are sprayed after the growing season begins.

“No one agency can tackle this issue alone,” said both Phillip and Misenheimer. “The Corps can only treat infrastructure and land, while other agencies and private land owners must be actively involved as problem species are likely to establish themselves outside of the Corps’ jurisdiction.”

One such example of this took place on May 2, 2017, when the Arkansas Electric Cooperative Corporation removed 40 truckloads of vegetation from its hydro plant to a disposal site to prevent the intakes from getting clogged and disrupting power generation at Lock 2.

Opening remarks were given by Shell, with an invocation offered by David Yarbrough, executive director of the Tulsa Port of Catoosa.

In 1991, the 20th anniversary of the extension of the navigation system to Tulsa via the Tulsa Port of Catoosa, AOPOA established the “Hall of Fame.” The purpose of the Hall of Fame, according to AOPOA, is to honor those who have performed significant and outstanding service in the development of the MKARNS. A full story on the honorees will appear in the September 24 issue of The Waterways Journal.

The MKARNS was officially opened June 5, 1971. Members of AOPOA and other river system stakeholders said they are planning a year-long celebration of the 50th anniversary of the system’s dedication starting in June 2020.

“We will have an entire year of celebratory activities along the entire waterway until June 2021,” said Scott. “We are a relatively young waterway, with enormous potential. I can’t wait to see what the next 50 years has to offer.”

The MKARNS, which includes 445 miles of navigable waterways, originates at the Tulsa Port of Catoosa and runs southeast through Oklahoma and Arkansas to the Mississippi River. The river system is named for two U.S. senators, Robert Kerr (D-Okla.) and John McClellan (D-Ark.), who helped push legislation through Congress. President Richard Nixon attended the dedication ceremony.

Caption for photo: The invasive water hyacinth quickly spread across the water at Lock and Dam 2 on the Arkansas River at Tichnor, Ark. The plant can cause wear and tear on lock gates. (Photo courtesy of Little Rock Engineer District)