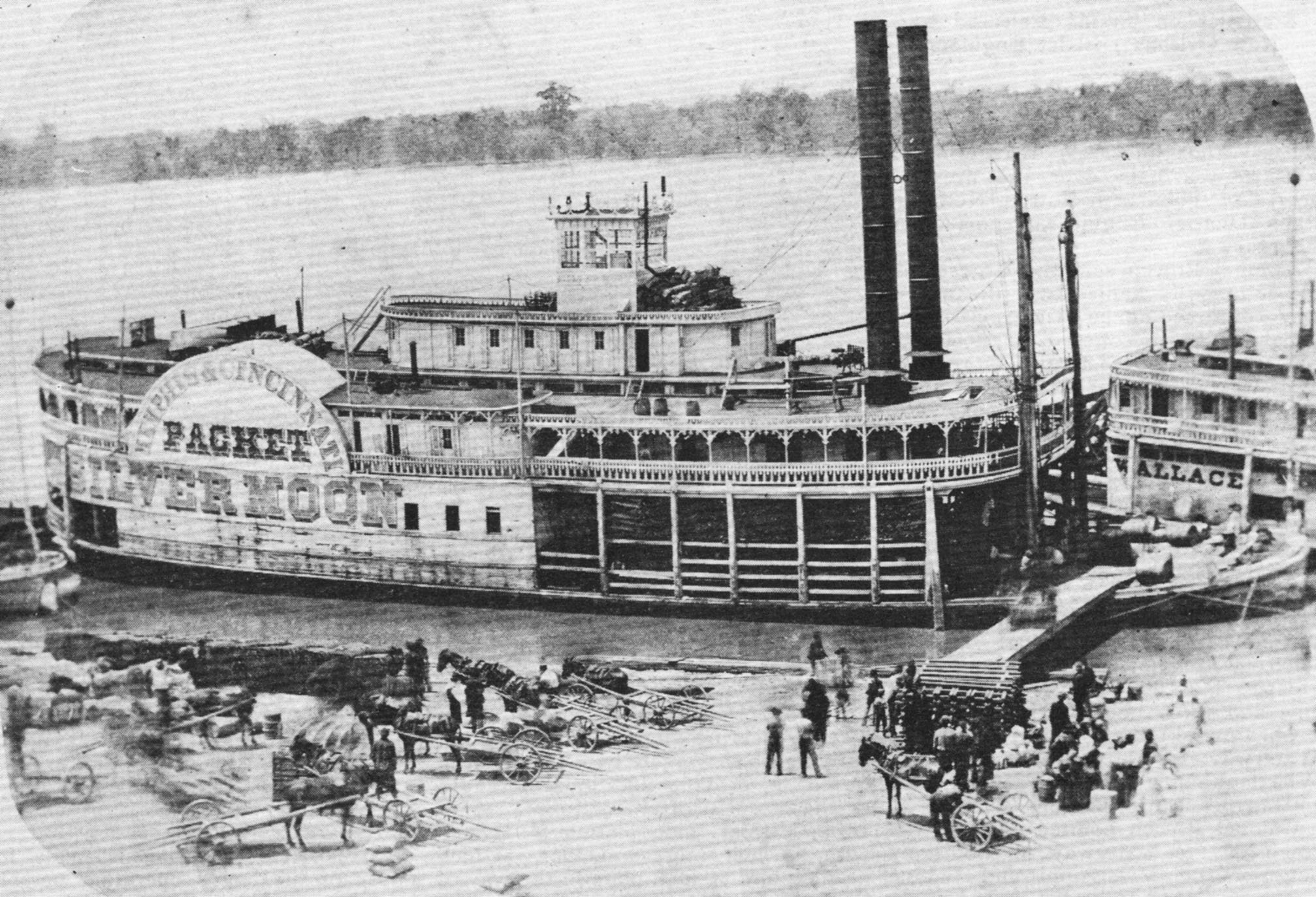 The sidewheeler Silver Moon was unique for several reasons.

The boat was built specifically to fit into the short locks of the Louisville & Portland Canal. Constructed in 1859 at Cincinnati, the wooden hull measured 184 feet in length by 39 feet in width, with a depth of 7-1/2 feet. Three boilers supplied steam to engines having 22-inch cylinders with an 8-foot stroke. The paddlewheels were 26 feet in diameter with bucket planks 11 feet in length.

The sidewheeler was owned by the Cincinnati & Memphis Packet Company, of which Capt. James Bugher was superintendent; his brother, Capt. John Bugher was master of the Silver Moon. Another sibling, Capt. A.H. Bugher, was in command of the packet Glendale, owned by the same line.

When Fort Sumter was fired upon, starting the War Between the States, the Silver Moon was the last boat to depart Memphis before the Mississippi River was closed to traffic. As the riverboat ascended the Ohio River, it was given a festive reception at many landings. When Cincinnati was reached, the boat’s calliope played “Home Sweet Home.”

Records list the packet as being at Pittsburgh for the first time in 1862 as a cargo was loaded for St. Louis. When the Lower Mississippi was again opened to traffic, the Silver Moon resumed its usual Cincinnati-Memphis trade.

By 1866, Capt. W.G. Voris was in charge of the vessel; later that year, Capt. Ben Merrielees became master, with J.L. Carter presiding in the clerk’s office.

On January 17, 1866, the steamboat arrived in Cincinnati with 1,530 bales of cotton, setting a record. Later in the year, the record was surpassed when the boat carried 2,200 bales. The arrival at Cincinnati on one of the trips coincided with the dedication ceremonies of the new Roebling suspension bridge. The Silver Moon reportedly was the first riverboat to pass under the completed span.

On January 10, 1869, while upbound on the Ohio, the boat was carried by swift currents at the head of the Louisville & Portland Canal; it sank in shallow water. The freight was unloaded into two barges by Capt. Pink Varble. The riverboat was raised, repaired and returned to service. During the spring of 1869, the Silver Moon made a hazardous trip through the ice when most other steamboats were laid up; Capt. Merrielees afterwards was nicknamed the “Ice King.” On May 20 of that year, the vessel struck a rock and grounded on the falls at Louisville. Attempts to free the boat were futile, but a severe storm with high winds released the trapped vessel. In the spring of 1871, the boat stalled, again on the Louisville falls, due to being heavily loaded with freight. Coming to the rescue, again, was Capt. Pink Varble, who was brought out in a skiff and piloted the steamboat safely to the Portland wharf. For his heroic efforts, Varble was presented with a pyramid cake.

The boat was dismantled in 1872 at Cincinnati. A saloon along the city waterfront was named in honor of the Silver Moon and was still in business in the 1930s.

In this week’s Old Boat Column image, the sternwheeler seen lying alongside the Silver Moon, at the Memphis levee, is the Sir William Wallace. Built in 1855 at California, Pa., the boat burned at Mobile, Ala., in 1866.

Editor’s note: Keith Norrington may be contacted by e-mail at curatorkeith@yahoo.com, or by mail through the Howard Steamboat Museum at P.O. Box 606, Jeffersonville, Ind. 47131-0606.