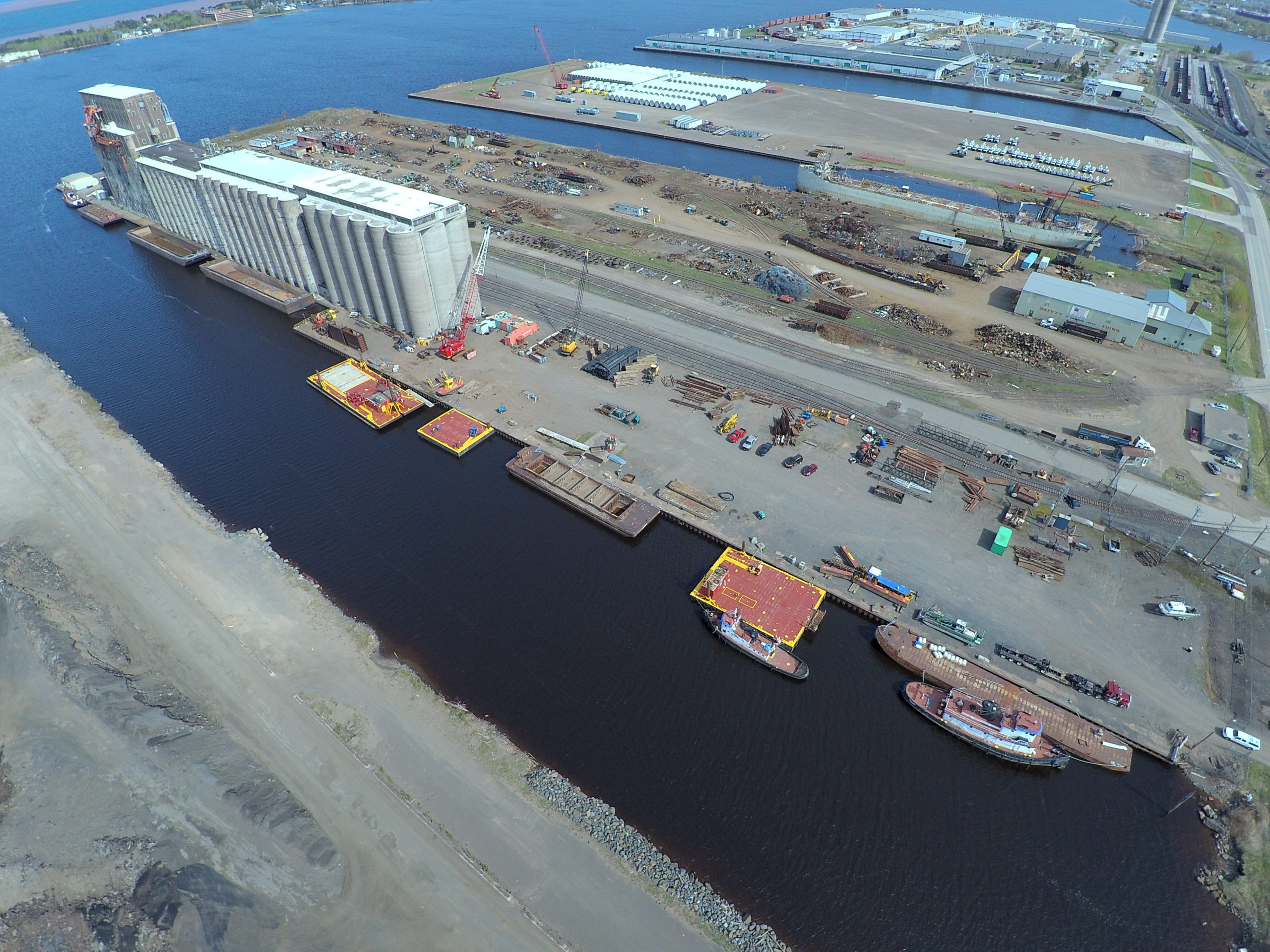 Marine Tech of Duluth, Minnesota, has been a major dredging contractor in the Great Lakes for decades, specializing in mechanical work and some hydraulic dredge work.

“My phone hasn’t stopped ringing,” Smith said. He takes on small dredging jobs in Minnesota and Wisconsin using rented equipment and does consulting work. He doesn’t miss the stress of running a larger company.

Smith began with Marine Tech in 1998 as manager, and in 2001 bought the company. The company did work for the Corps of Engineers, as well as cleanup work in the Duluth area. One major early job was remediation of a contaminated steel mill site on the St. Louis River, which feeds into Duluth Harbor – a three-year project.

At the June auction, J.F. Brennan Company of La Crosse, Wisconsin, purchased a portion of the large floating equipment and opened a Duluth office, renting a headquarters building, 700 feet of dock and upland space from Smith at 602 Helberg Drive in Port of Duluth

Brennan plans to bid on both mechanical and hydraulic contracts in the northern Great Lakes area.

After opening the new office and yard, Brennan bid on and won two dredging projects in the area.

In late summer, Brennan’s MV Bulldog model bow tug pushed two spud barges and two hopper barges, with the small boat Shorty loaded onto one of the barges, north along the Lake Superior coast to the site of a 55,000 cubic yard maintenance dredging project in a small harbor.

Starting in mid-September the crew began the project by using a duty cycle crane with a clamshell bucket to load material directly into 45-ton off-road trucks. As the dredge moved away from the offload area, it began loading into the two hopper barges, to be offloaded into the trucks by a material handler mounted on a second barge. The trucks stockpiled the material at a site approximately a mile away.

Bad weather shut the project down for about a week, but the crew was able to remove most of the material by the end of the environmental window on October 1, and immediately mobilized for the Minnesota Slip project in Duluth. That project includes leveling and adjusting the depth of the 3¼-acre slip, then capping the entire area. The slip is adjacent to the Duluth Entertainment Convention Center. Brennan is doing the work in three phases, said Project Manager Nick Patterson. The entire slip must be leveled to approximately -16.5 feet by moving material from high spots into the low areas, then capping the entire slip. The site is located within the St. Louis River Area of Concern (AOC) in Duluth, Minnesota, and is part of the Great Lakes Restoration Initiative. The project will assist in the removal from the AOC of Beneficial Use Impairments (BUIs) fish consumption advisories and degradation of benthos.

Phase 1 includes leveling the slip by partially dredging shallower areas and relocating the sediment to deeper portions of the slip, involving about 4,500 cubic yards of material to achieve an overall flat grade. Phase 2 is placement of 12-inches of clean sand dredged from the Superior Entry to

Duluth Harbor, and Phase 3 is placement of six inches of an erosion protection layer of capping material, which will be secured from a local source.

A model of this capping configuration conducted at ERDC in 2017 simulated lead, total polycyclic aromatic hydrocarbons (PAHs) and anthracene, and determined that this configuration would provide protection from benthic organism exposure in Minnesota Slip for 300 years.

Brennan began work the first week of October. Using a Liebherr 956 material handler on a spud barge and digging with a 2 ½ cubic yard clamshell bucket, the crew began the process of moving material from high areas of the slip to lower areas.

Existing depths range from 5 to more than 20 feet of silty sand, Patterson said.

The borrow site for the sand capping material at the Superior Entry is 8 miles from Minnesota Slip. Brennan will dredge with a 9310 crane mounted on 50-foot by 120-foot spud barge, placing the material into two hopper barges pushed by the Bulldog.

The end date for this project is November 30, coinciding with the end of the navigation season. Duluth Harbor regularly freezes up completely in the winter, with two feet of ice throughout the harbor.