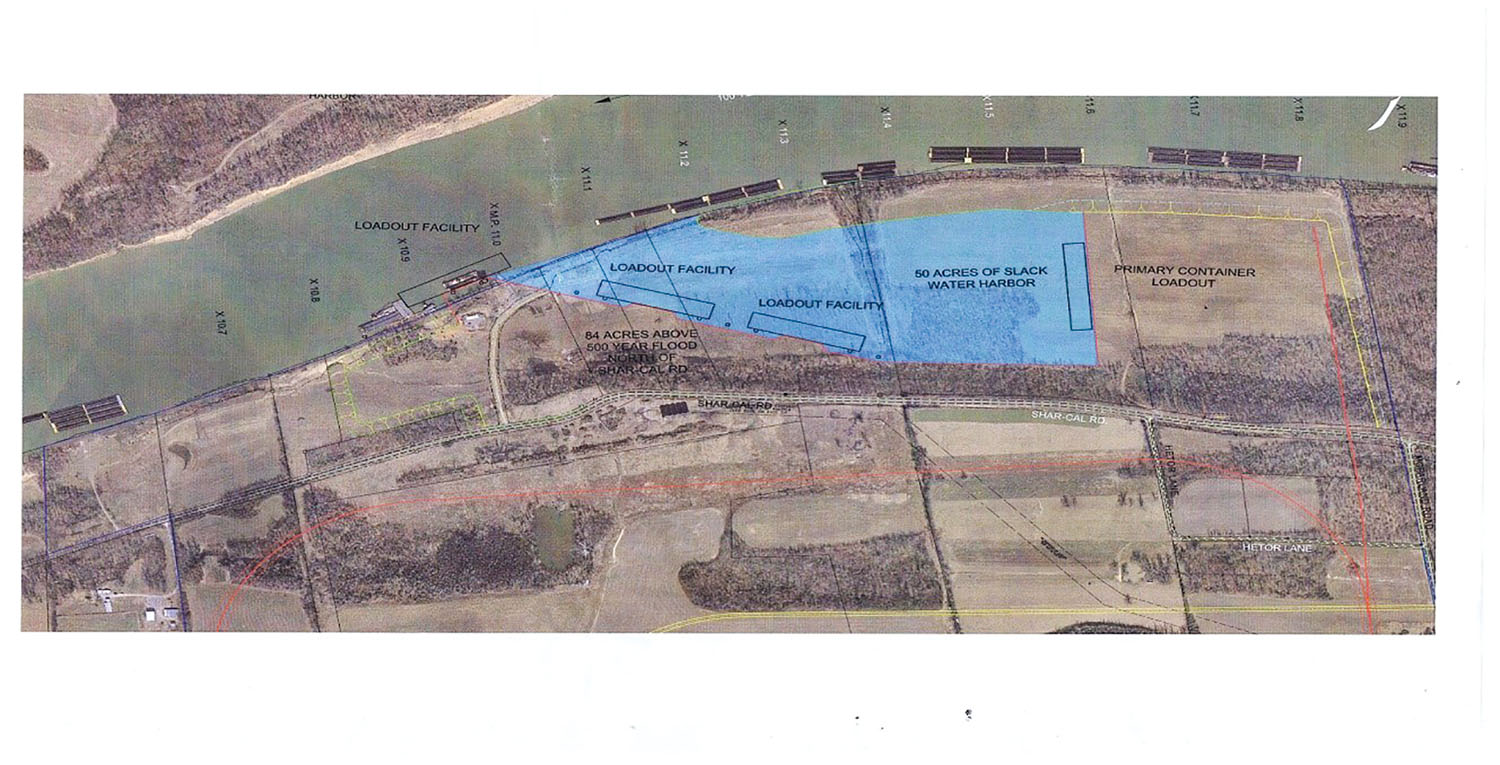 The first phase involved the excavation of the initial 25 acres of a harbor that will eventually take up 75 acres. The harbor was dug to a depth of 30 feet and is protected against a 100-year flood by a 4,000-foot berm along the riverside of the development. Two-thirds of the basin is envisioned as a container terminal, while the rest is seen as a transfer point for agricultural products. The rest of the 1,300 acres will be designated as an industrial park.

Hollinger has been working on the Port of Calvert City for several years. He said he has all the necessary permits in place, including one for unit trains and a designation from the Tennessee Valley Authority (TVA) as one of its “mega-sites.” The port’s designation as a free trade zone is pending, he said.

To help promote the project, he has enlisted the help of ARK Maritime LLC, a business development and strategy consultancy owned by Floyd Charrier of New Orleans. Charrier has labeled the project the “Inland Seaport–Hub & Spoke” for its centralized location in the “Heartland of the U.S.A.” and its connection to highways and railroads, as well as the rivers.

Approximately 60 percent of the U.S. consumer population is within 600 miles of the port’s site, Charrier said, naming St. Louis, Chicago, Memphis, Cincinnati, Pittsburgh, Mobile, New Orleans and Kansas City as examples. The North America Rail Network, namely BNSF, CN, CP, CSX railroads, to pick a few, crisscrosses the area; and Interstate Highways I-24, I-69 and I-55 are close by, he said. Rivers such as the Ohio, Mississippi and Tennessee-Tombigbee give the “Inland Seaport” two waterborne accesses to the Gulf of Mexico, New Orleans and Mobile, said Charrier.

“The port’s intermodal capabilities and ‘mega-site’ size are its strongest selling points,” Charrier said. The property is fully permitted for a 23,000-foot rail loop around the perimeter for unit trains. “That’s what distinguishes it from many other ports and it’s exciting to see such a game changer coming to the inland waterways.”

Commercial opportunities include its development as a terminal for containers, fertilizer, oil and gas, LNG, CNG or ethanol; its use as a lay-down area for bulk materials such as rock, sand, coal, iron ore pellets, steel or petroleum coke; as a distribution and fulfillment center for big box stores; or as a gas-freeing, repair or fuel bunkering site for marine or rail interests, he said.

Hollinger said he plans to start working on the remaining acres of the harbor in the spring of 2019.

A second project, one that could be developed immediately, is located only two miles from the Calvert City Port on the Tennessee River. It is comprised of a 356-acre segment that was the site of a former steel mill. There is a main warehouse that has approximately 400,000 square feet of space, an additional warehouse with approximately 30,000 square feet and an 11,000-square-foot office building. The area is served by power from TVA and natural gas from ATMOS Commercial. The site benefits from the same intermodal connections as the nearby port.