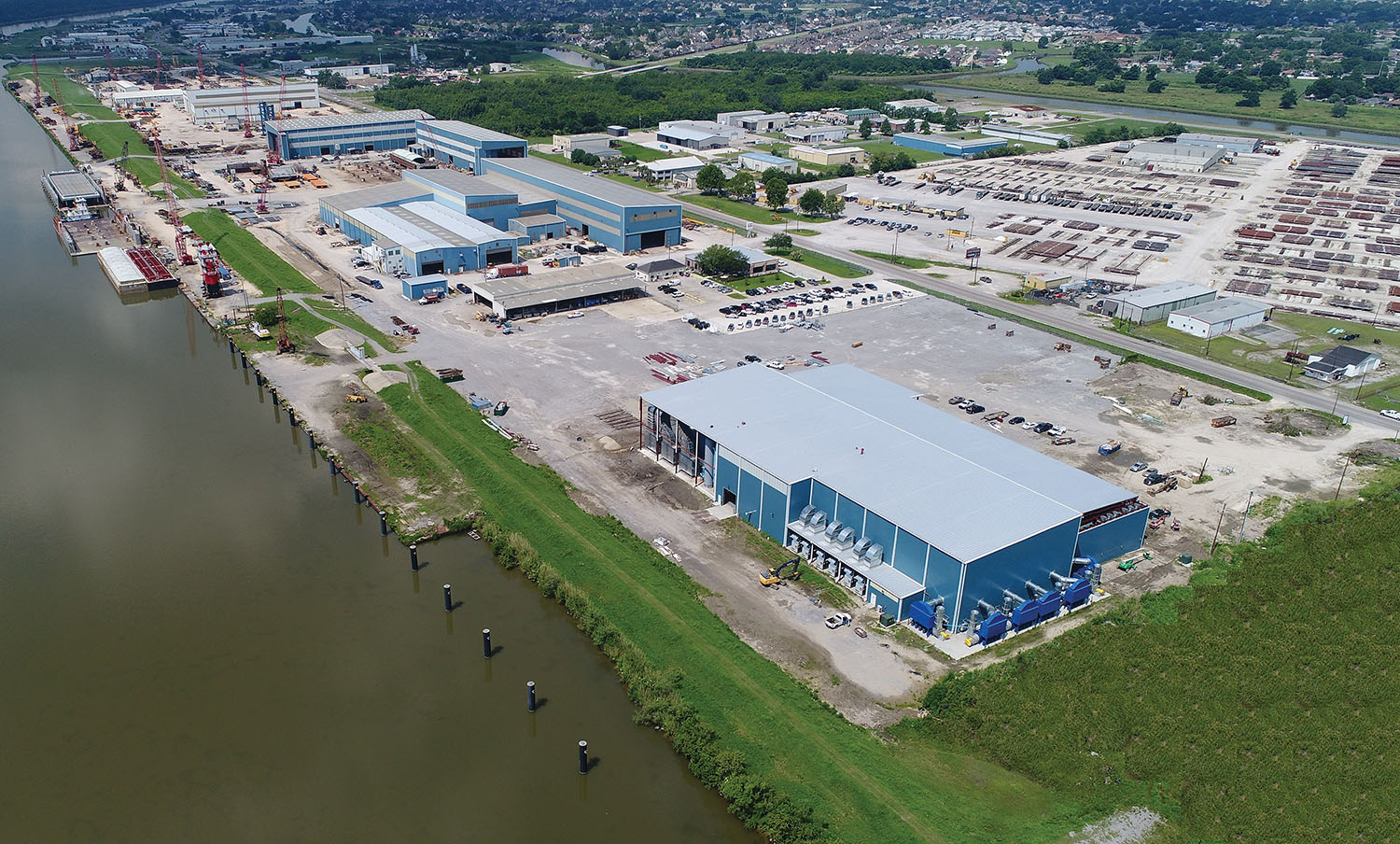 For 20 years, C&C Marine and Repair has built a reputation for innovation and efficiency in the marine construction and repair market. Over that time, the shipyard has produced vessels and barges for both the offshore and inland markets. And with C&C’s recently-opened blast and paint facility and recently-added dock space, the company is going after more tank barge repair and construction work.

But before C&C was a premier shipyard for the marine construction and repair market, before the shipyard covered more than 80 acres on the Algiers Canal, the company was first a small fabrication business on the Harvey Canal.

“When we started, we were not a shipyard,” C&C owner Tony Cibilich said. “We were not in the marine business. It was more of a construction company that was doing bulk materials, transfer facilities, grain elevators. We were doing mostly plant work.”

In 1997, Cibilich left his father’s machine shop to start his own company. The original location, on Peters Road along the Harvey Canal, had a thousand linear feet of dock space, of which he rented 800 feet, a 5,000-square-foot fabrication shop with one 5-ton overhead crane, and a 40-foot by 200-foot slip.

Cibilich said at the beginning, when C&C was doing mainly plant work, it wasn’t unusual for him to be at a facility in Baton Rouge at daybreak, spend a few hours there, then drive all the way to eastern New Orleans to another facility.

“I used to be in the truck for half the day and on different sites half the day,” he said.

Then Cibilich got a call that would dramatically change the direction of his life and the life of his company.

“Someone called me one day for a barge repair, and they called me for another one and another one,” Cibilich recalled. “For the first time, I didn’t have to travel to Baton Rouge or to here or there. All of a sudden, I started getting work where I went to my own place and didn’t have to go anywhere else.

“I thought I had died and gone to heaven,” he said. “I just thought that was the best thing in the world for me.”

Cibilich said it took around a year and a half or two years to generate enough shipyard work to totally give up plant work and focus entirely on the marine side.

During that time, Cibilich also made another strategic move to set himself up for success in the marine business when he bought a drydock.

“We bought our first drydock from my next door neighbor on Peters Road,” Cibilich said. “He came to me one day and told me, ‘I’ve got the thing for you—two sunken drydocks. You need to buy these and repair them to sell at a later date.’”

Cibilich said he was about 75 percent of the way in to repairing the first drydock when he went to lunch with a customer to negotiate a contract to build a stevedoring rig. After agreeing on the terms of the contract for the stevedoring rig, the customer commented that now he needed to find a place to convert the barge. Cibilich said, “Well, how wide is your barge?” As it turns out, the barge would fit in his soon-to-be-repaired drydock. An hour later, Cibilich had a second contract in hand, the second one to convert the barge to accommodate the crane.

“I thought, ‘This is great. I haven’t even finished the drydock, and I just doubled my work load,’” Cibilich recalled. “The drydock really opened some doors.”

After just a couple years at the Peters Road yard, Cibilich moved C&C to its present location on Engineers Road along the Algiers Canal. The move drastically increased the company’s room to grow. Instead of a 5,000-square-foot fab shop, the new facility started out with 60,000 square feet under roof on Engineers Road.

“My wife said at the time, ‘Finally, a place you’ll never fill up,’” Cibilich said. “But within two weeks of moving in here, I had every bit of bulkhead filled up and every square foot inside the shops filled up with work.”

As Cibilich has expanded and built out C&C’s shipyard on the Algiers Canal, he’s made everything happen under roof, which allows work to go on regardless of the weather. Cibilich said in South Louisiana, moving construction inside is a no brainer.

“It’s pretty much common sense—if you’re willing to make the investment,” he said. “The difference in production in doing something inside in South Louisiana versus doing it outside, is, I’d say, at least 33 percent more production.”

From that original 60,000 square feet under roof, the shipyard has grown to feature more than 470,000 square feet under roof and more than 3,200 linear feet of continuous frontage on the Algiers Canal and Gulf Intracoastal Waterway. Over the past 19 years on Engineers Road, the shipyard has built barges and vessels for both the offshore and inland markets. Most recently, the yard has built triple screw Z-drive towboats for multiple towing companies.

The company announced in June it had purchased part of the Versabar property on the west side of C&C’s shipyard. And earlier this month, C&C officially opened its new blast and paint facility on the east side of the shipyard.

The efficiencies of the new blast and paint facility are remarkable. Cibilich said it will typically take anywhere from 18 to 60 days to blast and repaint a 30,000-barrel tank barge, depending on the weather.

“The last 30,000-barrel tank barge we did, now that the system is fully operational, we were able to blast it in 2-1/2 days and paint it in five days,” Cibilich said.

And while C&C is continuing its vessel construction and repair business, the expansion last summer and the opening of the blast and paint facility are part of a diversification into the tank barge market, Cibilich said. Besides the paint and blast facility, C&C has also started offering internal structural exam (ISE) repairs for tank barges. In addition, the company is under contract to begin building two new 30,000-barrel tank barges.

“We’re trying to be a one-stop shop for the tank barge operators,” he said.

Remarkably, Cibilich attributes the continued innovation, diversification and success at C&C in the marine industry to his inexperience at the beginning.

“One of the biggest disadvantages I had when I got started was also one of my greatest strengths: I didn’t come from a shipyard,” he said.

Cibilich said he’s never felt tied to how things have always been done simply because he wasn’t brought up in the industry.

“I didn’t have that thought in my mind that ‘This is the way we’ve done it for 30 years,’” he said. “So every time I needed a new piece of equipment or needed to upgrade a facility, I didn’t look at what was done 40 years ago. I looked to see what other people were using and what the newest technologies were out there at the time.”

And besides the wide range of construction contracts—from barges to offshore supply vessels, towboats and, now, even dredges—Cibilich’s commitment to innovation, efficiency and excellence can be seen, simply, in the people who come to work at the yard day in and day out.

“We’ve been fortunate enough that, while in the past three years most shipyards have downsized to some degree, we’ve probably increased our employment by 15 or 20 percent,” Cibilich said.