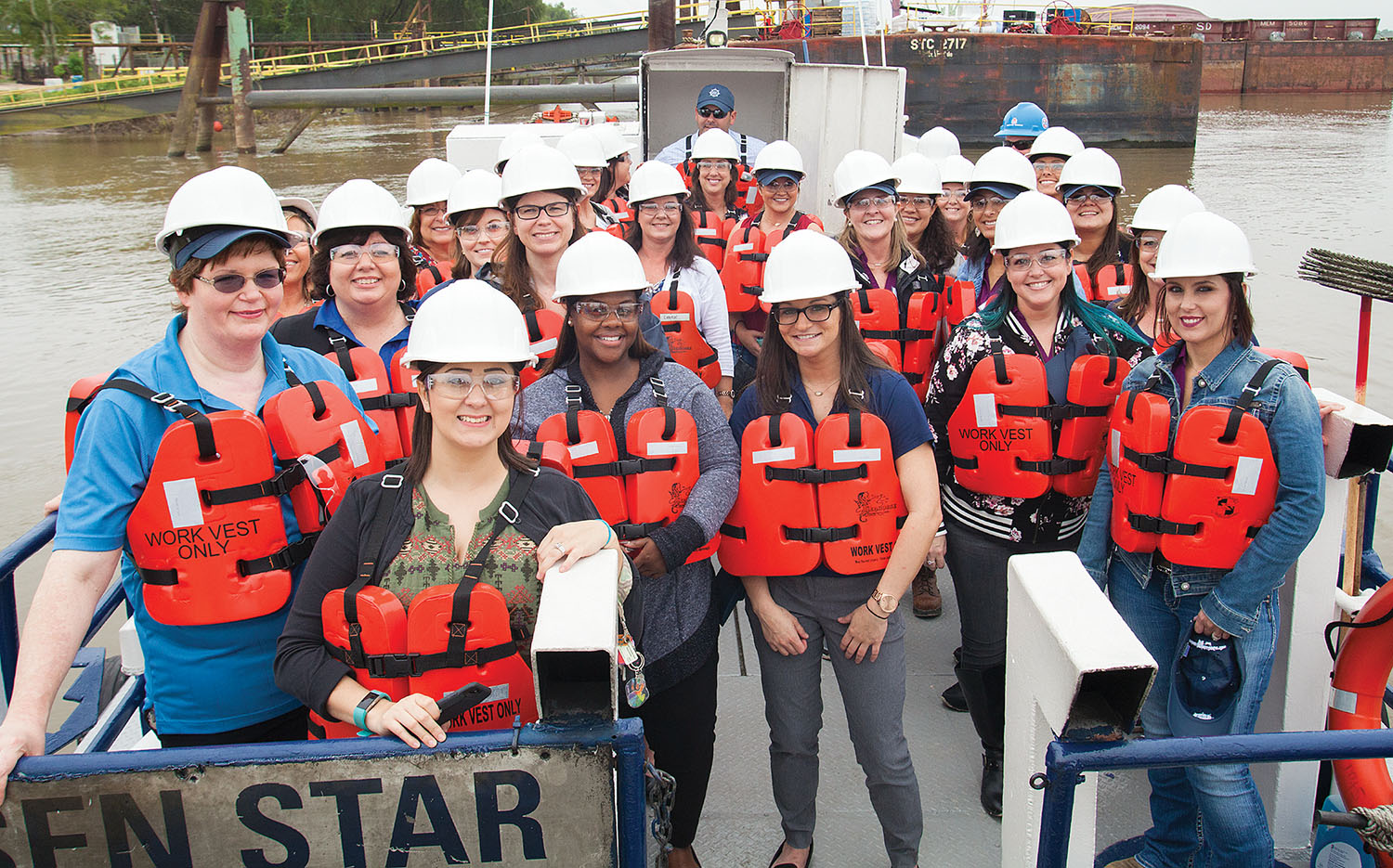 Women in Maritime Operations (WIMOs), a women-only organization focused on connecting women working in the maritime industry, fostering community and offering networking and professional development opportunities, held a social lunch-and-learn event November 8 at Associated Terminals’ Convent, La., office, along with a tour of ACBL’s fleet at Mile 158 on the Lower Mississippi River.

More than 80 women attended the event, which drew members and non-members alike from the Baton Rouge and New Orleans areas and everywhere in between.

“We’ve got everyone from logistics personnel, ship agents, safety, human resources and more,” said Holly Normand, the president of WIMOs, who works in dry cargo sales for Ingram Barge Company. “It was so big we had to divide the group in two.”

Prior to the November 8 gathering at Associated Terminals, WIMOs had around 175 members representing 55 companies. Normand, noting that about half the attendees were not members, anticipated the organization’s membership to surge above 200 following the event.

Normand said that, because the maritime industry is still predominantly made up of men, organizations like WIMOs and occasions like the lunch-and-learn are important for connecting women in the industry to one another.

“Some of these ladies have probably talked to each other on the phone for 10 years but have never met,” Normand said. “It’s all about interacting and networking. It’s been an amazing experience.”

A group of women maritime industry leaders from the New Orleans area formed WIMOs just over a year ago. Now, Normand said, the organization is planning to form multiple chapters: one covering Southeast Louisiana, a Houston chapter and even an Ohio River chapter.

“We’ve really gotten great feedback from so many people who want to be involved,” Normand said.

A team of Turn Services mariners aboard the mv. Risen Star, one of the company’s crew boats, led the tour of ACBL’s fleet, which also included sights of Associated Terminals stevedores working alongside a ship. The Turn Services crew included Cristina DelCastillo, a crew boat captain who has been with the company about a year. A Metairie, La., native, DelCastillo has worked on crew boats on both the Mississippi River and offshore and on drill ships. She will soon have her towboat license, and DelCastillo hopes to be at the helm of one of Turn Services’ towboats soon after that.

“Turn really is like a family,” DelCastillo said. “This is where I want to retire.”

Once she earns her towboat captain’s license, DelCastillo will join a select sorority of women leading towing vessels in the United States. She encouraged women, regardless the field of work or walk of life, to relentlessly pursue their dreams.

“I hope women of all ages are inspired and can reach their goals,” she said. “Dreams in all industries are achievable by determination and consistency.”