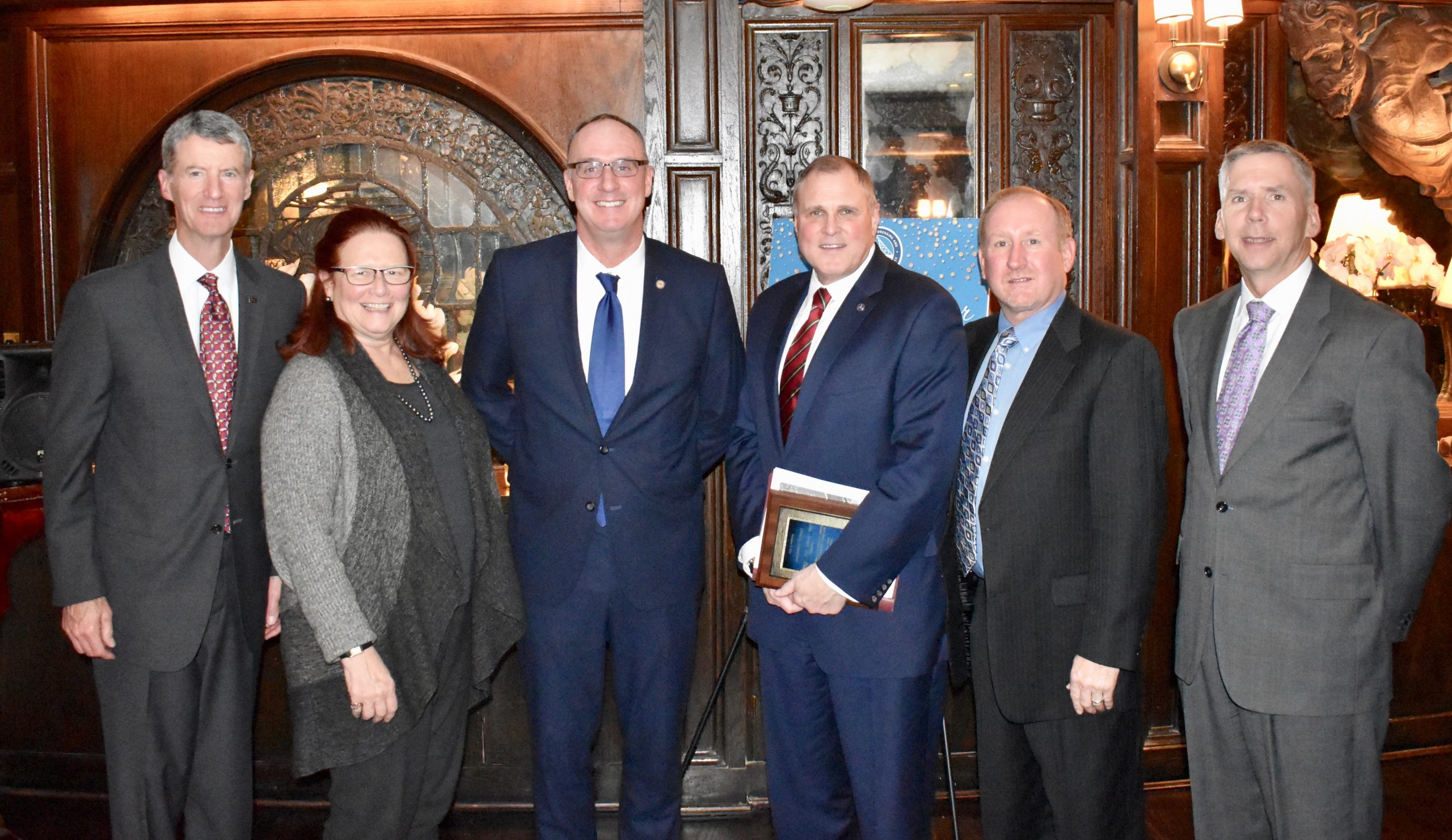 The following winners and awards were honored: for the Individual Leadership in Safety Award, Devon Carlock, vice president of safety &

government relations for Cottrell Contracting Corp.; for the Corporate Leadership in Safety Award, The Dutra Group; a Certificate of Appreciation to John Cannon, chief of safety for U.S. Army Corps of Engineers Portland District; and the Guest of Honor Appreciation to Hon. Howard “Skip” Elliott, administrator of Pipeline and Hazardous Materials Safety Administration, U.S. Department of Transportation.

Devon Carlock of Cottrell Contracting started implementing safety initiatives in late 2015. Some of these initiatives were to develop personal awareness for each employee.  With personal awareness and training, employees were able identify safety hazards and ways to correct them. A Stop Work Authority campaign was developed and implemented. The training included real on-the-job scenarios.

Carlock regularly conducts safety talks with yard and dredge crews, making late night and early morning visits to observe and assist in identifying possible hazards. Meeting and communicating the important safety procedures with the crew was a contributing factor for the safety success at

Compliance also contributed to the company’s safety success. The use of unmanned aerial vehicles (UAVs), cameras and surveillance are important tools for compliance. Areas that are identified as hazards or where unsafe activity is observed were reviewed quickly. “One of the largest contributing factors to safety success is the commitment from the crew. Each employee had to make the commitment to safety; without that commitment no safety initiatives or programs will work,” Carlock said.

Incidents sharply declined at Cottrell in 2017 with zero loss time injuries, and 2018 continued to be a great year for safety with only two incidents that resulted in light duty. As technology continues to develop adjustments in standard operating procedures are modified to adapt.

“Not only does this occur during quarterly meetings, it has opened communication all year long,”

Carlock said “A partnership with the U.S. Army Corps of Engineers has resulted in opening the dialogue with individual districts, providing feedback and a forum where issues and best practices can be discussed. Partnerships with the Dredging Contractors of America, the Associated General Contractors, the American Waterway Operators and the National Safety Council has resulted in experts from all contributing to CDMCS.”

Boots on the Ground

Howard Cooper, safety manager at The Dutra Group, said the company has been trying to innovate its safety program for some time. “Our corporate office has been putting a huge emphasis on safety culture,” Cooper said. “Our biggest push has been to get information to the workers in the field.”

The Dutra Group uses the slogan “Down to the Boots on the Ground.” A lot of information is passed between the company’s safety departments and executives, Copper said, but it wasn’t getting far enough down the company ladder. In 2018, the company was focused on getting that information to the crew on-site doing the work. The company trains and certifies employees on many topics, including fall protection, confined spaces, CPR and first aid, and more. Cooper said 80 percent of its required training was completed in one year. Some training requires certification every other year and some up to every five years.

The Dutra Group has also moved from a weekly to a daily safety meeting. The company also employs site safety health officers (SSHOs) at every major job site to meet with teams daily to go over the day’s project plans. The Dutra Group uses activity hazard analyses (AHAs) to identify how a job will be complete step by step and any hazards. The record also includes a plan for controlling or mitigating the hazard. “As long as the crew members follow that, it should slow down incidents,” Cooper said.

Cooper also said that while the company prizes production, it also encourages its workers to take an extra moment in working around hazards. “Take a step back and realize what you’re doing before you do it,” he said.

John Cannon is chief of the Safety and Occupational Health Office at the Corps Portland District, where, he is responsible for developing policy, regulations and technical guidance for all safety aspects of Corps’ operations, construction and design. He is the proponent for the Corps’ Safety and Health Requirements Manual (EM 385-1-1) and technical specifications related to safety and health, facility and system safety, and also integration of safety and health into the Corps business process.  He is the technical lead and co-chair of the Corps Load Handling Equipment

Cannon’s commitment to improving the Load Handling Equipment program in the Corps extends far beyond the geographical boundary of the Portland District. Cannon is continually reviewing Naval Architect Analysis (NAA) documents both new and revised for consistency and applicability to the Corps Safety and Health Requirements manual at the enterprise level. Cannon has traveled to several Corps Districts to review both the Load Handling Equipment program, with special emphasis placed on ensuring that the Corps and its contractors comply with NAA requirements.