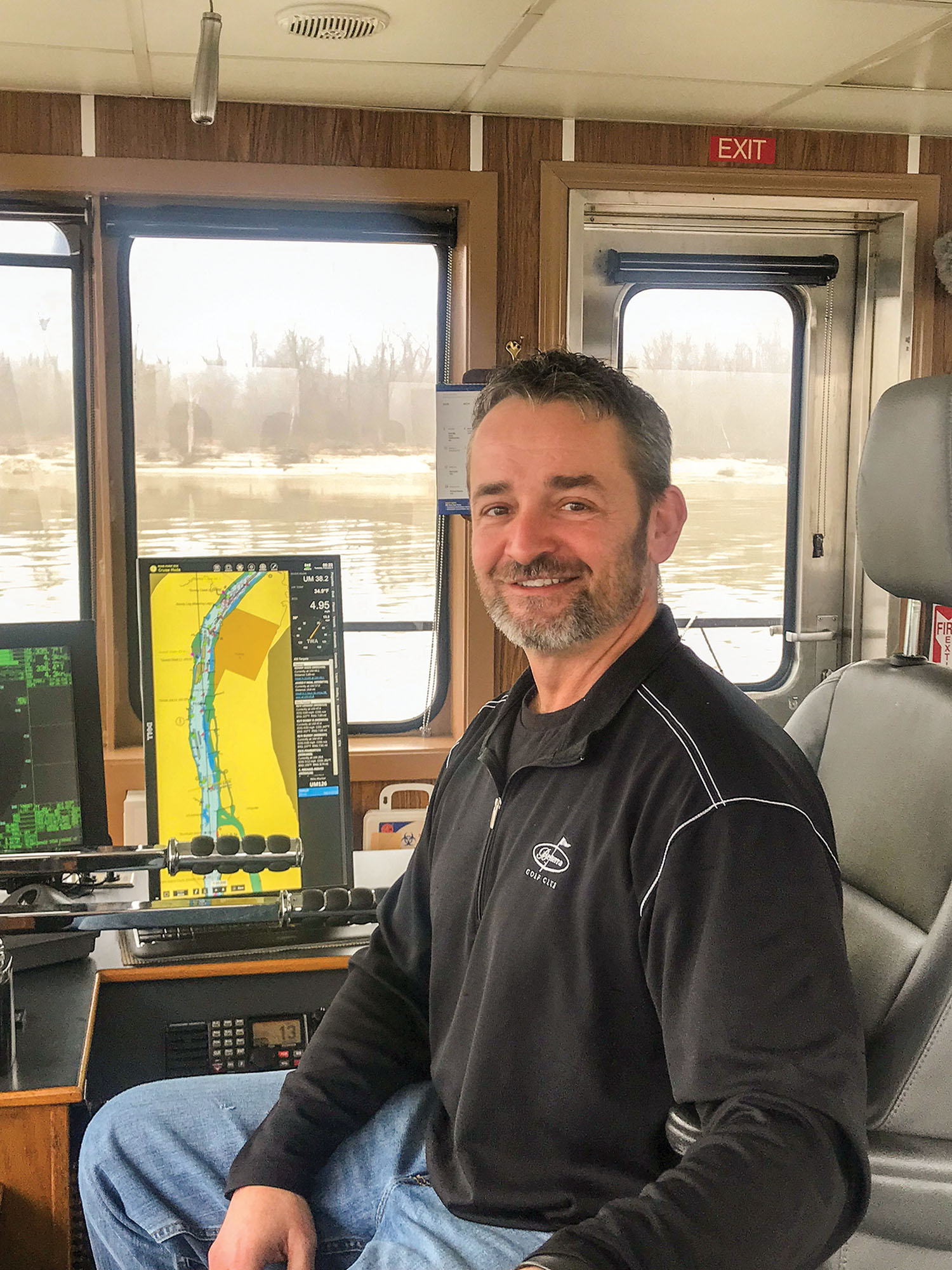 An avid golfer, Capt. Bryon Given applies the same work ethic to his job on the river as he does to his time on the golf course. His employer calls him “tireless, relentless.” He is a captain on the mv. Leonard L. Whittington, a 140-foot, 5,600 hp. towboat operated by Inland Marine Service (IMS) for American Commercial Barge Line (ACBL), and is in his 24th year on the river, his 20th with IMS.

Growing up in East McKeesport, a borough of Pittsburgh, Pa., Capt. Given worked at a Ponderosa Steakhouse until he was 20 years old and attended a community college there for one year before learning about towboats from his neighbor, a riverman named Paul Schelinski, who today is an engineer for Southern Towing Company.

His parents lived in an apartment building. His dad, a Vietnam veteran, was a steelworker before the steel mills in the area closed. After that, he took whatever job he could find, Given said. He has one brother.

“I noticed our neighbor brought home a pretty good paycheck,” Capt. Given said. He worked on the towboat Irene C for Arkansas River Company, hauling coal on the Ohio River. “So, I asked him to let me know when they ever had an opening.” When he did, Capt. Given jumped at the chance, he said, and in 1995 at the age of 20, he began his career as a green deckhand, garnering as much information as “someone from Pittsburgh possibly could from a crew made up mostly of guys from the South,” he said with a laugh.

Inland Marine Service took over the lease of the Irene C after his first two trips, he said, beginning his long association with the company. He was promoted to second mate after a year, then first mate a year later, and shortly after that got his operator’s license.

Wanting to work as a pilot and with IMS’ blessings, he next took a job with C&C Marine on a small 1,400 hp. boat running the Monongahela, Allegheny and upper Ohio rivers. He credits Capt. Joe Stewart with helping him become a pilot at the age of 25, saying he did a lot of steering under him. “He was my mentor,” he said.

“In 2005, after four years, Inland Marine Service called me back,” said Capt. Given, and he went to work on the 2,800 hp. Tennessee Merchant, adding the Ohio River to his license. Later, when he piloted the mv. R.W. Naye, he posted the Upper Mississippi River.

Given currently has a regular run from ACBL’s coal terminal just above St. Louis to Cairo, Ill., where he hands over his usual 25 loaded barges to another boat for delivery to a power plant in New Roads, La.

His normal return trip is 30 empties or a mixed tow “of whatever is headed north.”

He presently lives in Independence, Ky., near Hebron, with his wife, Amy, whom he met through IMS President Capt. Dave Hammond Jr.; two stepsons, Michael, 25, and Matt, 20; and six dogs. “Five of them are Shih tzu poodle mixes. The other one, which I claim, is a golden retriever.”

Given couldn’t say enough about the Hammonds. “They are great people,” he said. “Cathy, Dave Sr. and Jr. are like family. They treat me really well, as they do all of their personnel.”

About 20 miles from his home in the hills of northern Kentucky is Highland Country Club in Fort Thomas, the golf course where he recorded his best score to date, a 79. He plays to a handicap of 14, which takes a lot of work to maintain, very much like being a well-regarded towboat pilot, as Dave Hammond Jr. attests.

“Bryon and I grew up together in this business,” Hammond said. “I feel honored to have worked with such a smart, honest and talented individual. He not only is a good friend, he is truly a proud, professional mariner.”