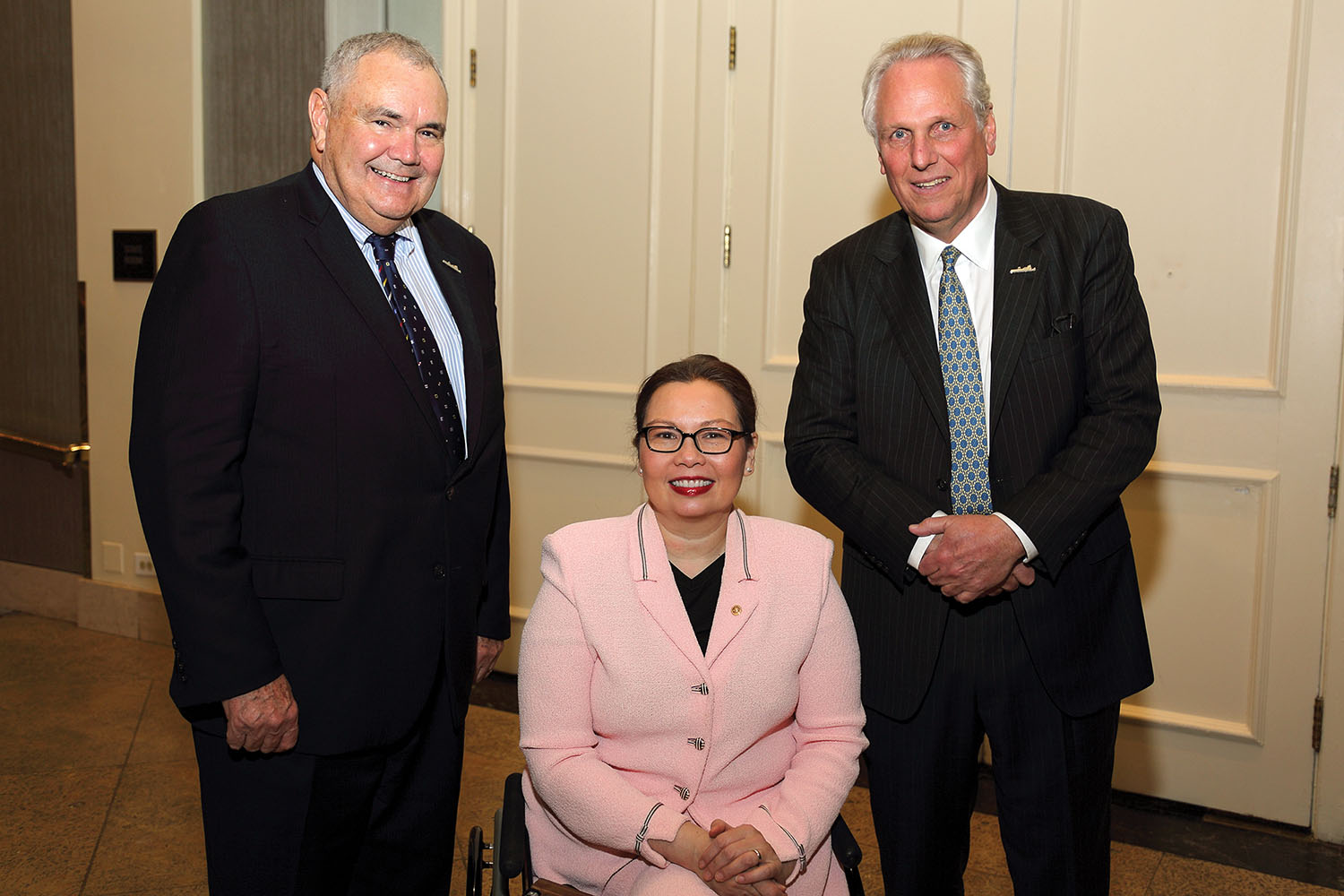 The three-day event concluded with meetings of the WCI Membership Development and Retention Committee, and the National Waterways Foundation.

The Capitol Hill fly-in divided WCI members into state teams to meet with 95 offices in the House and Senate to discuss WCI’s 2019 priorities, which are as follows:

• Consistent with past years, WCI will oppose any additional taxation, tolling, lockage fees or other charges placed upon the users of the inland waterway system.  This position reflects the fact that, in 2014, WCI successfully advocated for a 45 percent increase to the diesel fuel tax that our member companies pay into the Inland Waterways Trust Fund (IWTF).  IWTF receipts are combined with public funds for capital navigation infrastructure investments and improvements.  Commercial barge companies and their customers are the only beneficiaries of the waterway system to pay this tax.

• For the Fiscal Year 2020 (FY 20) Energy and Water appropriations bill, WCI advocates for the maximum amount of construction funds supportable by the diesel fuel tax receipts deposited into the IWTF.  In addition, the IWTF cost-share formula should be revised to conform to the same formula applied to building deep draft navigation projects.  Specifically, the IWTF-financed construction projects should require 25 percent of the project cost be derived from the IWTF and the remaining 75 percent from general revenues. This is necessary to efficiently complete WCI’s priority navigation modernization projects in the coming years.

• Within the FY 20 O&M account, at least $860 million should be dedicated to inland waterway navigation.  WCI also supports full expenditure of the amounts deposited in the Harbor Maintenance Trust Fund (HMTF).  The 2014 Water Resources Reform and Development Act (WRRDA) established a 10-year goal of using all HMTF annual revenues for the purpose for which they are collected; to dredge the nation’s harbors and channels.   Since that time, Congress has been successful in meeting annual appropriations targets for deep water dredging, and WCI supports full funding of the targeted amount in FY 20.

• In the FY 20 Energy and Water Development appropriations bill, WCI strongly supports Preconstruction Engineering and Design (PED) funding for several authorized projects: the Navigation and Ecosystem Sustainability Program (NESP), a long term program of navigation improvements and ecological restoration for the Upper Mississippi River and Illinois Waterway System that will be implemented incrementally over a 50-year period through integrated, adaptive management;  the Upper Ohio River Navigation System to modernize the Emsworth, Dashields and Montgomery Locks and Dams, all of which were constructed prior to 1936 and are the oldest and smallest lock chambers in the entire Ohio River Navigation System; and the Three Rivers project in southeast Arkansas to modify and improve the entrance to the McClellan–Kerr Arkansas River Navigation System to ensure its long-term viability.

• WCI supports exploring opportunities to redirect, within the Treasury Department, a small percentage of the net hydropower federal revenues generated at Corps of Engineers dam projects.  The approach would not change anyone’s tax burden.  Rather, it would simply redirect a modest amount of federally received hydropower revenue into the Inland Waterways Trust Fund instead of into the Treasury’s miscellaneous receipts account where it is currently being deposited.   The change would benefit the navigation industry as well as the other users on the inland waterways system, including hydropower generators that rely upon federal dams. This redirection will ensure the IWTF has the annual receipts to support full and efficient lock and dam improvements.

• WCI applauds the objective of expediting infrastructure projects by streamlining the study, approval and permitting process.  Unreasonable delays should be eliminated so that worthy projects may be considered by Congress for authorization and construction at the earliest opportunity.

• The introduction of invasive aquatic nuisance species is a problem in a number of nation’s waterways.  WCI continues to support the Unlock Our Jobs coalition’s efforts to control invasive species on the Illinois River and tributaries while keeping that system safely open to navigation.  WCI opposes any lock closures on the inland waterways transportation system that are not supported by the system’s commercial users and are not part of the normal decommissioning process.