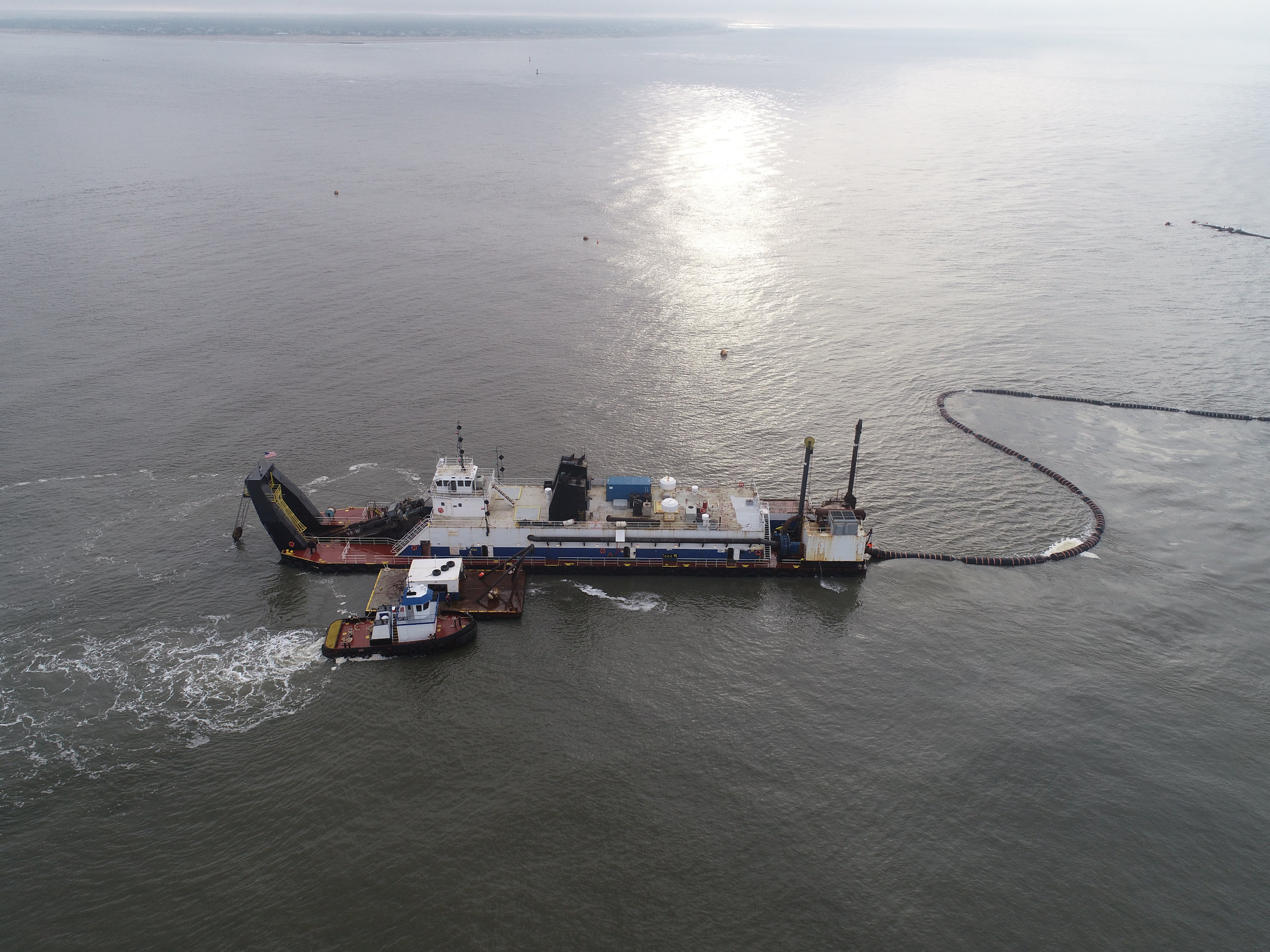 Under an $11.7 million contract, Marinex Construction Company of Charleston, South Carolina, began dredging in mid-January for a project on Bald Head Island in North Carolina. The company is moving sand from Jaybird Shoals to shore to both protect a rock groin and to add material to South Beach.

Using its 250-foot long, 24-inch cutter suction dredge Savannah, Marinex will remove an average of 10,000 cubic yards per day for a total of 1.1 million cubic yards from Jay Bird Shoals, which is a sand deposit that sits about a mile and a half from the beach placement area.

According to Thomas Payne, vice-president of Marinex, the Savannah’s size makes it ideal for working in shallower inland inlets and with nearshore borrow areas. In addition to the dredge, the company is also using two tender vessels, a standby tug, and anchor barge and a crane barge.

Work began in mid-January and is expected to be completed by the end of March.

“The great thing about working at Bald Head is that Jay Bird Shoals, in most situations, is blocked by winter (weather) patterns where southwest winds make it rough at the shoals. With that and that the island is secluded with little pedestrian traffic, things go faster,” Payne said.

Sand is placed on the beach and covers 13, 300-foot long, sand-filled geotextile tubes that stabilize the beach, preventing it from eroding into the nearby shipping channel. The sand tube groin field was installed to help alleviate sand loss that was exacerbated due to the curvature of the shoreline.  The sand tubes are replaced about every 5 years in coordination with beach fill projects.

The beach fill will create a berm between 200 and 250 feet wide over a half-mile area. Sand will be placed on the beach via 20,000 plus feet of pipeline. The pipe includes a splitter to allow crews to place sand along separate sections of beach without repositioning the pipe.

The updrift accretion of sand will provide fillet for the terminal rock groin at the west end of south beach. The 1,130-foot semi-permeable terminal groin is at the end of the beach system and was installed to reduce the rate of sand loss.

Putting sand on the beaches at Bald Head Island is an ongoing maintenance project for the U.S. Army Corps of Engineers, but also for the Village of Bald Head Island. Under an agreement that stemmed from the deepening of the Wilmington Harbor in 2000, materials that come from maintenance dredging of the navigation channel in the Cape Fear River are to be placed on either Bald Head Island or Oak Island in rotating years. In years the Corps is not providing the sand to Bald Head and dredging is necessary, the Village has to come up with funding, in partnership with the state to replenish lost sand. Instead of the sand coming from dredging the channel, the Village takes sand from offshore deposit areas, such as Jay Bird Shoals. The Corps dredges the channel approximately every three years

Under the original Wilmington Harbor project, 15.5 million cubic yards of material was removed from the navigation channel in the Cape Fear River taking it to depths ranging from 38 feet to 42 feet. The work also entailed realigning the Ocean Entrance Channels and Inner Harbor Channels. The realignment put the entrance channel closer to Bald Head Island’s west and south beaches and put the channel directly through a previously used offshore disposal area.

To compensate for the lost disposal site, the Corps, under its Wilmington Harbor Sand Management Plan agreed to place materials removed from dredging the Wilmington Harbor on either Bald Head Island or nearby Oak Island beaches in regular intervals.

Following the initial harbor deepening project, Olsen Associates Inc. was hired to monitor the beaches on Bald Head Island every six months. They contracted with North Carolina based engineering firm McKim & Creed to use drone photography and in-depth surveys to measure sand loss or gain. The monitoring determined that sand was rapidly being lost from the beaches, particularly from South Beach, likely due in part to the realignment of the channel. The solution was to build a terminal groin.

Under North Carolina law, groins are difficult to have permitted. “About five years ago the legislature agreed to permit just four terminal groins in the state. While we weren’t responsible for the legislation, our work and monitoring reports helped push along the need for these structures,” said Erik Olsen, PE and founder of Olsen Associates, Inc., which is the company providing design and engineering services for the Bald Head project.

Many communities applied for permits for the four structures. The Bald Head Island request was sent forward but necessitated a full Environmental Impact Statement along with other permit requirements.

“We performed two years of analysis at the entrance to the Cape Fear to show the potential benefits of a terminal groin. We used the Delft 3D model, which is so robust it allowed us to answer any question that came up. For example, we had a regulator ask what would happen to fish larvae after we installed the groin, and we could even use the model to find an answer to that. As expected the model showed nothing would happen to fish larvae,” Olsen said.

The Delft 3D morphological model is a large-scale numeric model developed by the Dutch. Olsen used it to predict the entire littoral environment as far as 150 miles out from either side of the entrance to the Cape Fear River. The in-depth evaluations of the project area included wave and current predictions, tide and storm surge levels, and inlet bathymetric surveys. The information gathered was used to predict beach and dune erosion, channel shoaling, seabed changes, wave transformation and forces on structures, water quality and circulation and other potential impacts from such a project.

“It took us a year to set up the model, to calibrate it and make sure it was replicating the Cape Fear River environs correctly. And once we ran it, we did our due diligence to make sure the project as designed and ultimately constructed, would not be impactive to either Bald Head or Oak Island,” Olsen said.

Of the four applicants for a rock groin only Bald Head Island’s has been approved and was completed in 2015.

The North Carolina legislation for rock groins dictates that the fillet must be regularly replenished to assure the stability of the groin. The current project is fulfilling that requirement as the sand being placed on South Beach will naturally erode and be captured in the groin.

Ongoing beach surveys have indicated the terminal groin is working to retain sand on the shoreline. The section of the navigation channel that had historically experienced chronic shoaling from sand coming from South Beach renourishment projects, did not require maintenance dredging in 2018 when it usually would have been needed. Further proof of success came in the aftermath of this past fall’s Hurricane Florence.