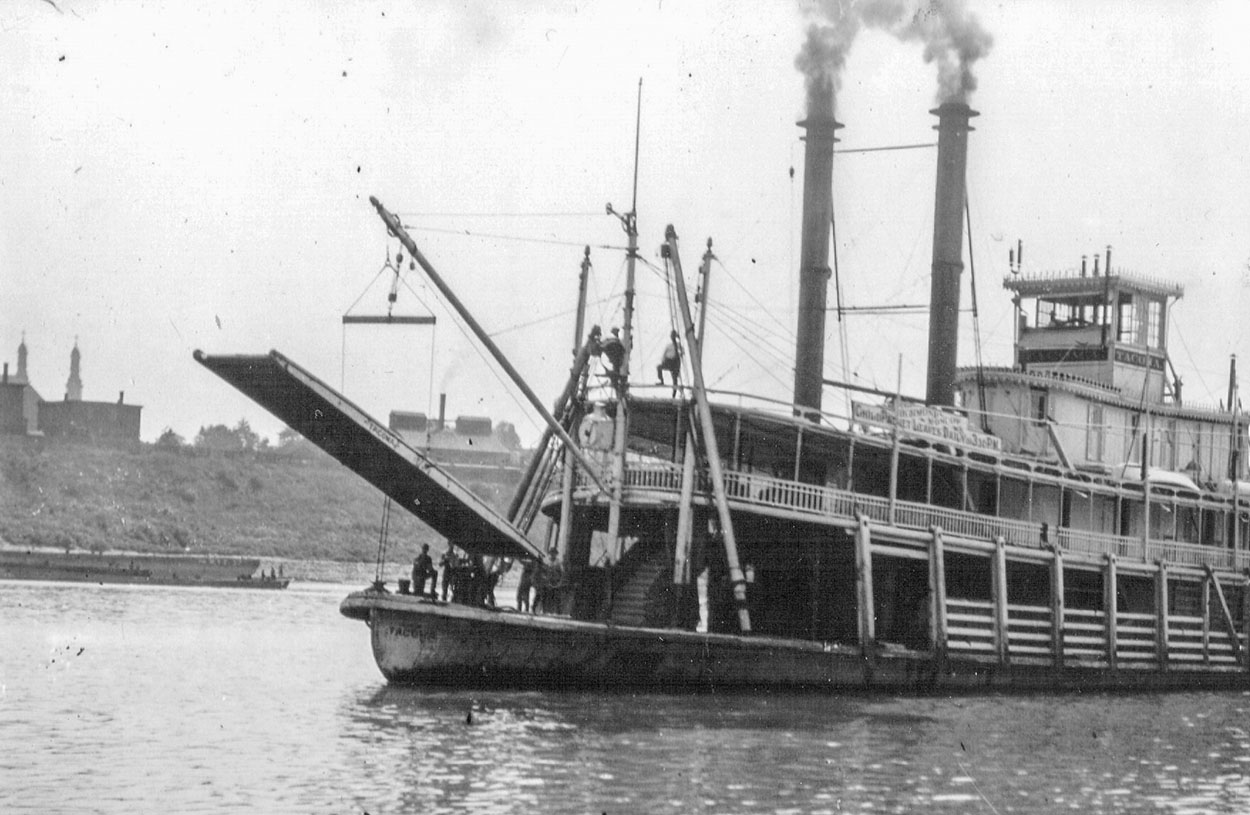 The Tacoma Was Long-Lived

According to riverman-historian Capt. Fred Way (1901–1992), the steamer Tacoma holds the record for being the longest-living packet boat to remain in operation without a name change or alteration in appearance.

Built at New Richmond, Ohio, in 1883, the sternwheeler was constructed on a wooden hull measuring 180.2 feet in length by 30 feet in width. Three boilers supplied steam to engines having 16-inch cylinders with a 6-foot stroke.

The steamboat ran for a total of 39 years and was always based at Cincinnati. The Tacoma was originally built for the Ohio River Packet Company to run in the Cincinnati–Chilo trade. The president of the firm was David Gibson, a Scotsman who (along with his business partner, N.C. Vanderbilt) operated a number of riverboats and also owned distilleries in the Ohio towns of New Richmond, Carntown and Moscow. Notably, Gibson’s fastest and most famed vessel was the Tacoma.

The first trip was run on September 28, 1883, with Capt. William Cliff, pilot; Asa Reed, chief engineer and David Cheesman, clerk. Sometime around 1890, the boat was acquired by the Tacoma Transportation Company, of which Martin Hissem was president and W.T. Hissem served as secretary.

The packet continued in its original trade until it was taken over by the Cincinnati, Portsmouth, Big Sandy & Pomeroy Packet Company (also known as the White Collar Line) on April 14, 1901. The Tacoma had been rebuilt (including outfitting with new hog chains) by the Cincinnati Marine Ways in 1897.

By 1904, Capt. Gordon C. Greene and some associates purchased the upriver properties of the White Collar Line, at which time ownership of the Tacoma was divided between Greene (5/16), Capt. William E. Roe (1/4), Capt. Martin F. Noll (1/4), Junius Greenwood and Capt, Jesse P. Hughes. The boat was placed in the Cincinnati-Pomeroy-Charleston trade and remained in that run for the balance of its career. Fare on the “Tack,” as the boat was affectionately known, was $8 per person, round trip; the five-day trip included three meals per day and berth.

A new hull and boilers were installed on the vessel in 1908.

The Tacoma was under the command of Capt. Jesse P. Hughes (1876-1973) for many years and he virtually raised his family on board. Hughes began his tenure with Greene Line Steamers on February 28, 1896, aboard the H.K. Bedford (Greene Line’s first boat of the 28 they would eventually own and operate) and retired from the Delta Queen on December 31, 1949, rounding out 53 years; he was with the Greene Line longer than any member of the Greene family. It was this writer’s privilege to know Capt. Hughes and to talk with him about his fascinating river career.

On November 4, 1922, a fire that originated aboard the Morning Star (reportedly caused by a pot of tar being heated for roof repairs that overturned on the cookstove) rapidly spread to the moored steamboats Island Queen (first), Chris Greene (first) and the Tacoma, all of which were destroyed in the spectacular conflagration. The machinery from the Tacoma was salvaged, rebuilt and utilized aboard the second Chris Greene.

Caption for top photo: The Tacoma in the Cincinnati harbor. (Keith Norrington collection)