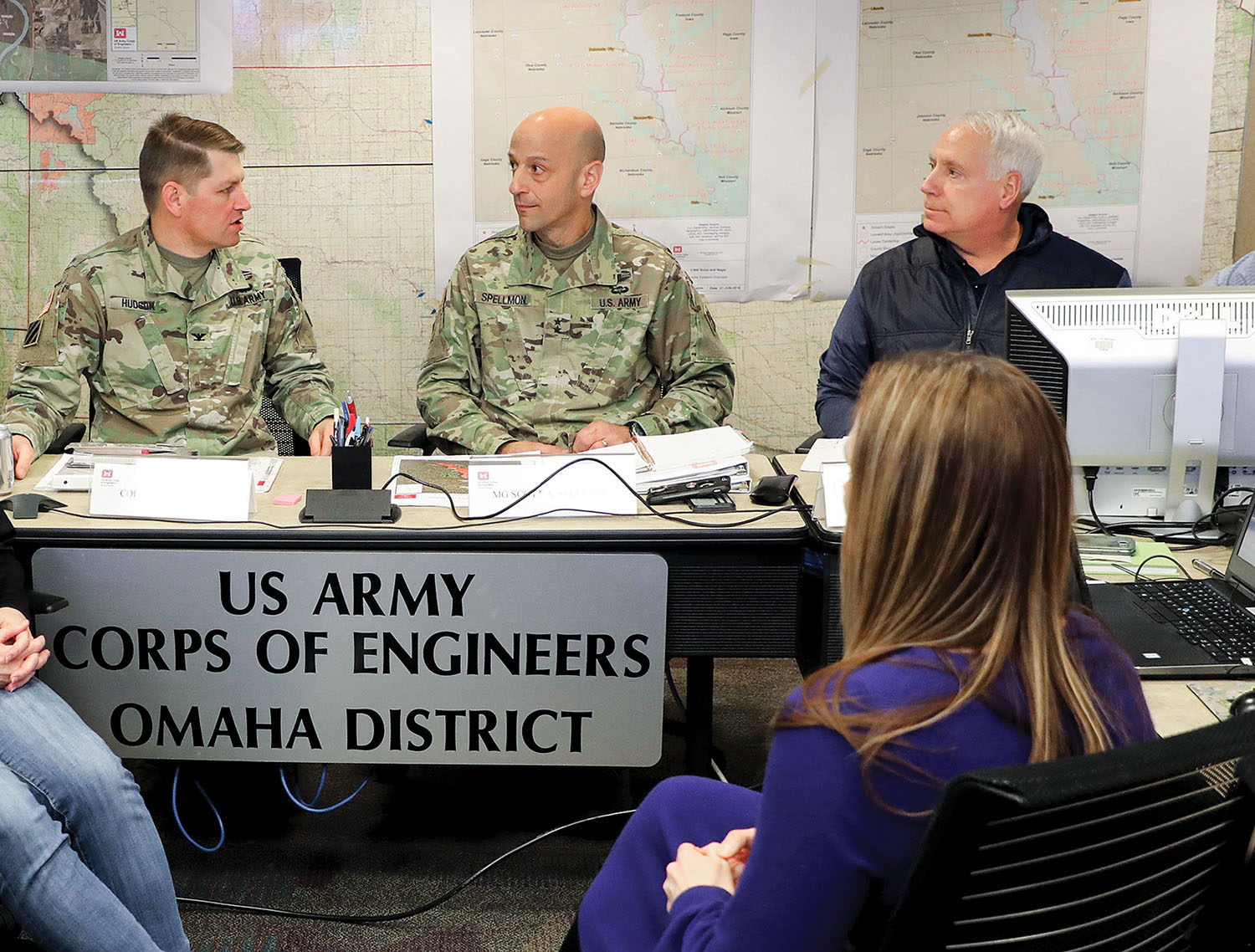 High water that was unleashed by mid-March’s late-winter storm and melting snow flooded towns and overcame levees along the Missouri River, but began to let up last week.

On March 20, several levee breaches  were confirmed in numerous counties in Nebraska, Iowa and Missouri, with remaining levees south of the Platte River down to the Omaha Engineer District’s southernmost border at Rula, Neb., still overtopped. At Fremont County, Iowa, the Missouri River topped out at 30.15 feet on March 16—2 feet above the area’s previous record in 2011. The river levels in that area were recorded at 25.17 feet last week.

In response to the high water, the Corps’ deputy commanding general for civil works and emergency operations, Maj. Gen. Scott Spellmon, and Ray Alexander, director of contingency operations, visited the Omaha District March 20 and inspected flooded areas that morning via helicopter to develop an understanding of the level of effort required to repair the structures.

The neighboring Corps’ district in Kansas City, Mo., declared a flood emergency on March 13 due to concerns resulting from the heavy rainfall, saturated and snow-covered soils across the basin. The Kansas City District said that it has been busy responding to the flooding alongside state and local authorities from Rula, Neb., to St. Louis, Mo.

On March 19, the Kansas City District said that five non-federal levees had breached in the district’s area. The following day, the Corps prepared for additional non-federal levee systems to overtop.

The Corps said that it had four mobile liaison teams to provide technical assistance to 12 levee owners and operators in Missouri and Kansas. As of March 20, the Kansas City District said that it had distributed more than 400,000 sandbags, with an additional 4 million sandbags on hand and a sandbagging machine available with a two-person crew.

Lucy Fletcher, business development manager for AGRIServices of Brunswick—a Missouri River stakeholder—said last week that so far, her company has been left unaffected by the flood waters. “We are due to crest on [March 23] and predictions anticipate things to fall off rapidly shortly thereafter,” she said. “We hope to be loading and unloading barges [this week] on the Missouri River.”

The Corps said in a statement last week that releases from its Kansas reservoirs that feed the Kansas River have been minimized with water being held in the lakes until conditions on the Missouri River improve. “Releases from our Missouri reservoirs that feed the Osage River have been minimized to not add to the high flows on the Missouri,” said the Corps.

Over on the Tennessee River, which was completely shut down last month, only a small section between Nickajack and Chickamauga locks had restrictions to navigation.

Travis Brickey, a spokesperson with the Tennessee Valley Authority, said he expected that restriction, which limited tows to daytime lockages, to be lifted by the end of last week. “It’s looking good here after just coming out of historic flooding that we’re still recovering from,” said Brickey.

The Corps said it is closely monitoring river conditions and providing information and assistance to state and local partners. The Corps said that it will continue to observe the water as it recedes to allow for the assessment of damage to the levee system to plan repairs.

On March 21, the National Oceanic Atmospheric Administration (NOAA) released its annual “Spring Outlook” report. In the report, NOAA said that the Cumberland, Ohio and Tennessee river basins in Kentucky and Tennessee received higher than normal precipitation this winter, with rain being the main driver behind minor to moderate flooding in the region this spring.

In Ohio, the report said that minor flooding is likely in the Maumee, Muskingum, Scioto and Great Miami River basins. The probability for major flooding was less than 50 percent on the Cumberland River, with a 5 to 20 percent chance of major flooding this spring.

On the Missouri River, the overall spring flood risk is higher than normal for the lower portion of the basin due to above normal snowpack across the Plains. Snowpack conditions over the upper Missouri River basin above Fort Peck, Mont., and the Yellowstone Basin is near normal despite snowpack in the St. Mary Basin being 85 percent of average. The Milk River Basin was 150 percent of average. Streamflow conditions from snowmelt in the upper Missouri and Yellowstone River basins this spring is forecast to be near normal.