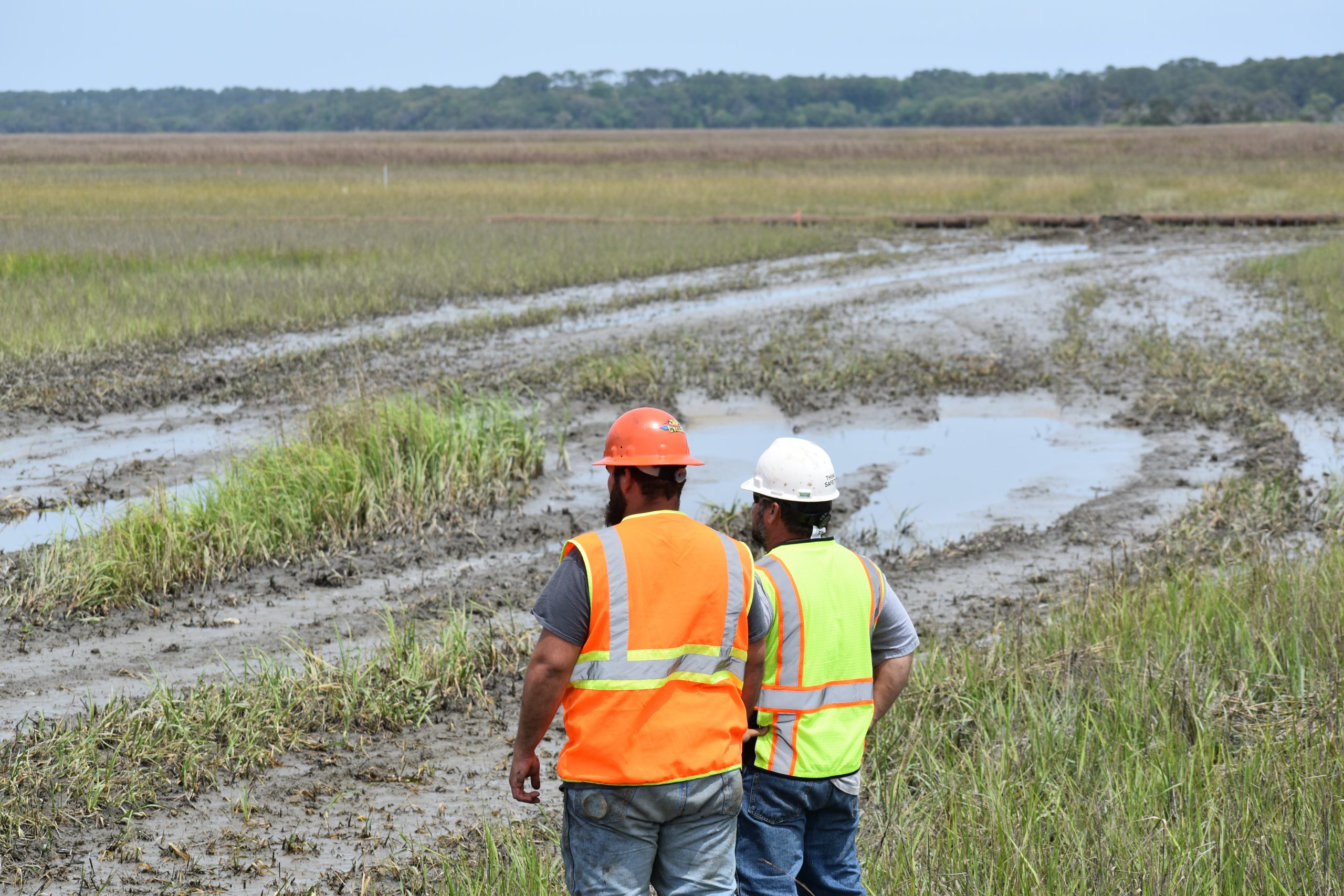 Cottrell Contracting began dredging Jekyll Creek in Georgia on April 15 under a $12,740,080 contract from the U.S. Army Corps of Engineers Savannah District. The contract, awarded January 23, includes both a beneficial use pilot project in Jekyll Creek and the regular maintenance dredging of other sites along the Atlantic Intracoastal Waterway (AIWW).

Devon Carlock, vice president of safety and government relations for Cottrell Contracting, said that the project also requires a total pipeline length of 35,000 feet because material is being discharged into very deep water. Staging, which included laying the pipe and coir logs began at the end of March.

The dredging and material placement for Jekyll Creek is part of a pilot project to develop economically efficient and environmentally acceptable methods to manage the dredged material. Jekylll Creek is the shallowest point in the 160 miles of Georgia’s portion of the AIWW and has not been dredged since 1998. The sediment in the creek is fine-grain with low sand content, known as “pluff mud,” which has posed a disposal challenge and prohibited any dredging.

“There were no upland facilities that would hold the volume of material. The onshore and offshore containment facilities were not large enough nor could we afford to transport the materials the needed distance. The closest offshore site is about seven miles away,” Georgia Federal Consistency Coordinator for Coastal Resources Division of the Department of Environmental Resources Kelie Moore said.

In designing this pilot strategy, the Corps’ Jacksonville and Savannah districts worked with the Corps’ Regional Sediment Management Center of Expertise, as well as other federal, state and nonprofit agencies to come up with a plan. The research (and this project) was funded entirely by the Corps, which worked with state partners to come up with monitoring protocol, and placement sites.

Planning began in 2016 with a visit to the site by the Corps’ South Atlantic Division commander. In subsequent months, the Corps held stakeholder meetings and public hearings while coordinating with the state Coastal Resource Division and Jekyll Island Authority (JIA). Other agencies brought in for assistance included The Nature Conservancy, the National Oceanographic and Atmospheric Administration, the U.S. Fish and Wildlife Service and the U.S. Environmental Protection Agency.

In 2017, the Coastal Resource Division conducted side-scan sonar and water quality surveys of the deep hole site and followed with additional surveys of the potential upland material placement sites that included collecting imagery and elevation data.

“We gathered background data to help the Corps come up with parameters on the placement of material and to help with their engineering. We used a tow behind side scan to get depth measurements, and we did a 2-year study to measure the biological parameters like marsh grass stem density and height, and micro benthos, like mussels, density and habitat distribution,” Moore said.

Following the research, two placement options were chosen for the pilot program—in-water placement in the “Deep Hole” and upland spraying of material on marshland. Work on Jekyll Creek includes the removing approximately 200,000 cubic yards of sediment from the eastern 75 feet of the channel bringing the channel to a depth of 10 feet.

“The removed material is being placed at two locations using methods that have never been used in Georgia to help keep sediment in the coastal system and maintain the health of adjacent marshlands. The goal of the pilot project is to explore whether these techniques can be used in the future to build coastal resiliency in the state,” Moore said.

The first sediment-placement location is north of Jekyll Creek in the St. Simons Sound. This location is known as the “Deep Hole,” since at 60 to 80 feet deep it is naturally deeper than surrounding areas in the sound that are dredged to just 38 feet deep. About 97 percent of the dredged sediment is being placed in the Deep Hole, where tides naturally spread materials. This sediment is being deposited by pipe near the bottom of the Deep Hole, about five feet from the sea floor. Tracers are being placed on the river bottom with the dredged materials, so scientists with Jacksonville, Florida.-based LG2 Environmental Solutions can monitor the movement of the placed sediment for up to two years.

Cottrell has previously placed materials in deep channels along the James River in Virginia, but the hole for this project is deeper and more challenging since it sits in open water instead of in a protected river. Weather is a bigger factor as is safety.

“We’re working near the center of the inlet, so our main concern is safety of the crew. We’re monitoring the barges that run through here constantly, mostly car carriers heading into Brunswick. We want to make sure they see us and we see them,” Carlock said.

The remaining dredged sediment is being placed on nearby marsh using a spray technique called “rainbowing.” Cottrell is using a small dredge pump equipped with a special nozzle to spray the material in an arc, so that it leaves a thin layer over five acres of marsh. About 5,000 cubic yards of sediment is scheduled to be pumped onto the marsh north of the Jekyll Island Airport. This area of marsh has a lower elevation, which makes it susceptible to saltwater inundation as sea level rises. The goal of spraying dredged sediment into this area is to raise the elevation one to two inches in some places and up to one foot in others, allowing new marsh grass to grow atop it at higher elevations.

“We’re learning that the more you traverse on the material on the marsh the deeper it gets so we’re trying to minimize the impact on the marsh itself by not using heavy equipment but still filling the site effectively. We pump for a set amount of time, stop, let the material settle in place and then start back up,” Carlock said.

Carlock also said the work has to be done at low tide otherwise the water can come in higher than the coir logs. This placement is unique for Cottrell, which has not used coir logs before.

Coconut-fiber containment logs or coir logs were put in place by Nichols construction company from Hortense, Georgia to prevent the material from running into the waterway. According to Moore, these coconut coir logs are 100 percent biodegradable as was required by the Corps. The densely packed coconut fibers are covered in a biodegradable natural fiber netting instead of the usual plastic netting. The logs will degrade in place within about a year.

Another five-acre location to the north is acting as a control area for the project. Scientists from Georgia Southern University and the University of South Carolina will monitor the placement and control areas for a two-year period to see how long it takes for the marsh grass to regenerate and how it performs in the future in the higher elevation.

“They will be monitoring vegetation to see how quickly the marsh recovers. They have done many similar investigations and studies, not with the Corps, but for marsh health monitoring in general. We hope to be able to use this method for coastal resiliency and sea level rise as something that could augment other low-lying coastal areas,” Moore said.

JIA and The Nature Conservancy purchased an elevated monitoring camera system to provide imagery of the project to the public as it progresses.

Once work is completed on the Jekyll Creek portion, the Rockbridge and associated equipment will be moved further down the AIWW for regular maintenance dredging at Fields Cut, Hell Gate and Buttermilk Sound areas in both Georgia and South Carolina.

Material from Field’s Cut will be placed in Jones Oysterbed Disposal Area adjacent to the channel. The Hells Gate material will be placed on Tract 15 and material from Buttermilk sound will be placed in Tract 42 B or Tract 43. The areas will be dredged to -12 feet MLLW with a 2-foot allowable overdepth and up to one vertical on three horizontal side slopes. Dredging of these areas is expected to be completed in September.