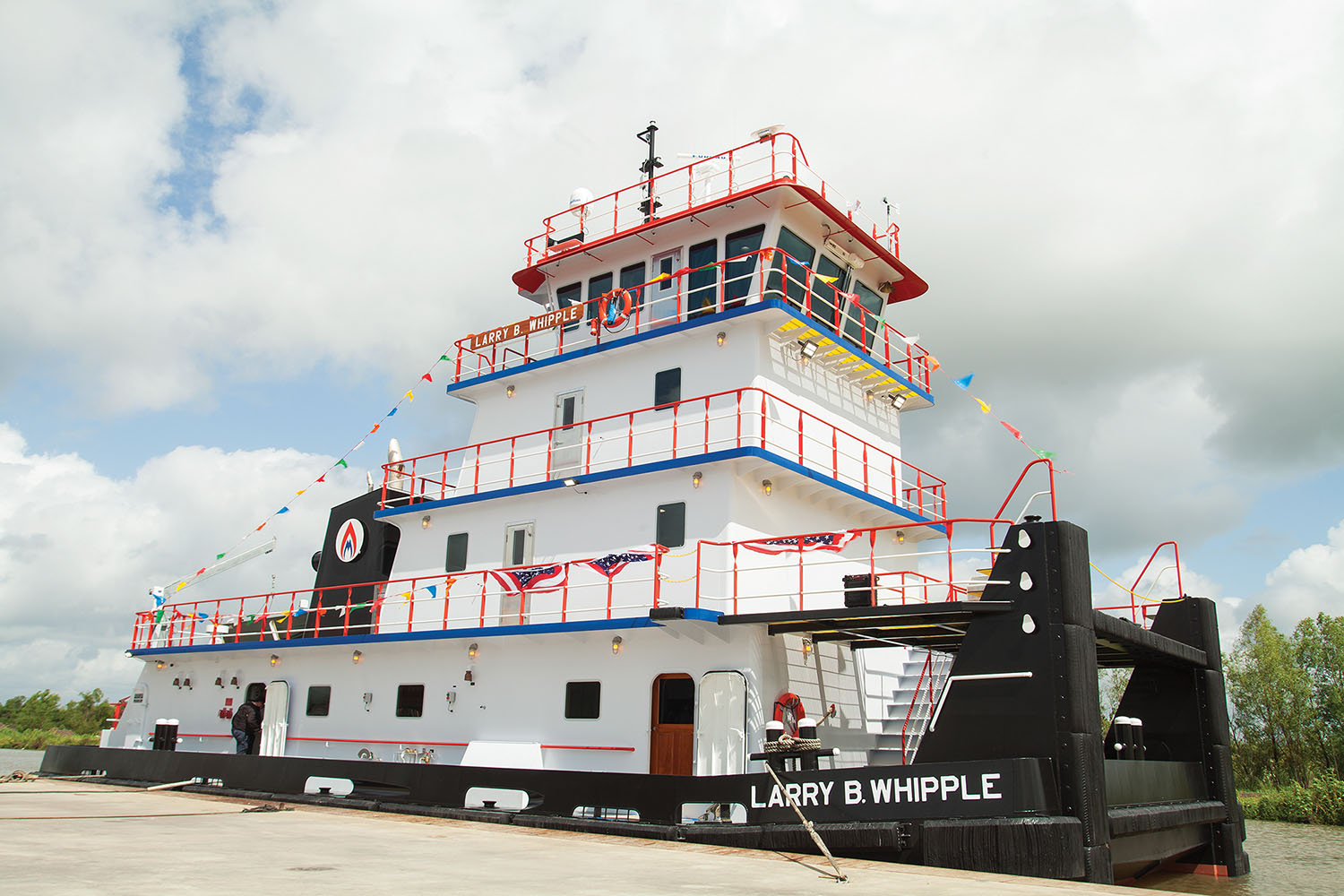 Leaders from Metairie, La.-based Maritime Partners LLC, along with representatives of Martin Marine, gathered in Bourg, La., April 8, at Intracoastal Iron Works to christen the mv. Larry B. Whipple. It was a classic South Louisiana springtime celebration, with plenty of sunshine, a warm breeze and more than enough boiled crawfish to go around.

The mv. Larry B. Whipple, named for Maritime Partners CEO Austin Sperry’s friend, sailing crew mate and godfather of one of his children, is the first of seven vessels Intracoastal Iron Works is building for the company, with many more forthcoming from other shipyards across the Gulf Coast as well.

And while it’s the first new build for Maritime Partners, the mv. Larry B. Whipple is far from the company’s only vessel. Though only four years old, Maritime Partners already owns several hundred vessels, both towboats and barges, which it leases to operators.

Sperry shared a little of Maritime Partners’ story at the christening. Sperry said he met Maritime Partners CEO Bick Brooks in 2010. At the time, Brooks was with a financial services company and Sperry worked for a barge operator. They soon discussed starting their own barge leasing business.

By 2015, they’d founded Maritime Partners and located their first towboat to purchase. Sperry said he remembers well the call in 2015 from Rick Freed, vice president of Martin Marine, confirming that Martin Marine would charter that first vessel.

“I was actually sailing with Larry Whipple, the namesake, in Miami, and Rick gave me the call and said, ‘We’ve looked at the boat and we want to lease it from you,’” Sperry recalled. “I was dancing around like a ballerina on the sailboat, and Whipple’s looking at me with my wetsuit on like, ‘What’s wrong with you?’ I said, ‘The ship has come in. We have an opportunity to do this.’”

The vessel’s owner at the time gave Maritime Partners a 90-day charter while Sperry and Brooks secured financing for that first vessel. On the 70th day, they received a letter of credit which allowed them to close on that first vessel on the 91st day, Sperry said.

“Literally, that’s how we got started, and we made a grand total of $40 a day on that first boat,” said Sperry, casting a smile toward Freed. “Thank you, Rick. You got a great deal.”

Fittingly, Martin Marine has chartered the mv. Larry B. Whipple, much as it did that first towboat in 2015.

Looking toward his children in the audience, Sperry said the story of Maritime Partners is a testimony of hard work and determination.

“We’re standing on a tugboat, and three or four years ago, Uncle Bick and I had no thought of doing what we’re doing today,” Sperry said. “So I want you to look at this and know that, whatever you want to be in life, you can be. You just have to continue to work and never quit.”

The Mv. Larry B. Whipple

All present for the christening of the mv. Larry B. Whipple heaped praise on both the quality of the vessel and the shipyard that built it.

“I don’t know that it can be beat,” said Freed, standing on the deck of the Larry B. Whipple. “No doubt it’s in the top 5 percent in the Gulf of Mexico. So shipyard workers, you’re the ones who did it. Thank you.”

Likewise, Whipple, addressing the entire shipyard crew gathered for the christening, said he was amazed at the craftsmanship and quality of the boat that bears his name.

“I did not expect to see this kind of boat,” Whipple said. “And I don’t call it a boat or a ship—I call it a yacht. It’s that kind of quality, and it’s pretty amazing. So again, I thank every single one of you for putting together such a great yacht.”

Raymond Butler, the vessel representative for Maritime Partners who spent much time at the shipyard during construction, echoed that praise for both Intracoastal Iron Works and vessel designer, Kenner, La.-based Entech Designs LLC.

“This is one of the best-designed towboats I’ve ever seen,” Butler said. “Combined with the way they built this, it’s far and away above anything else out there.”

Sewart Supply also outfitted the Larry Whipple with Twin Disc EC-300 controls, and the steering system is by EMI. Fendering is by M&M Bumper Service in Bourg, La., and the vessel’s electronics package is from Rhodes Electric Services Inc. in Houma, La. The vessel also features two 40-ton Nabrico deck winches and a full-width fleet deck forward of the main deck house for enhanced visibility.

Intracoastal Iron Works built the Larry B. Whipple with a robust hull, with 3/4-inch steel forward and aft, a 3/4-inch steel head log, 1/2-inch steel sides and 3/8-inch steel decks. In addition, every frame of the hull is solidly welded on both sides. The result is a solidly-built, stable vessel with minimal vibrations.

“The boat does not vibrate,” Butler said. “It’s very smooth, and it pushes very well.”

Butler said he was amazed at the design elements and innovations Intracoastal Iron Works included in the mv. Larry B. Whipple—most or all of which were done above and beyond the original specification package.

For instance, the cooler boxes on the port and starboard sides of the mv. Larry B. Whipple are stainless steel to avoid corrosion.

“No one in the industry does that,” Butler said. “That’s half-inch-thick stainless.”

The weld seam where the hull meets the railing is two inches above the deck, which means crew members can repair the bulwarks with a torch without evacuating gas from the fuel tanks. Also, behind the bumpers is a 3/4-inch steel plate, which means wastage won’t be a concern. Vent pipes from the engineroom exit through the wall 6 feet or more above the walkway, thus eliminating a tripping hazard and making maintenance easier. Another safety measure is a staircase to the top of the pilothouse rather than a more typical ladder.

Butler also pointed to recesses in the bulwarks amidships.

“Recessing that bulwark allows your face wire to come all the way to that button from the corner of the barge, and it doesn’t chafe on the bulwarks,” Butler said.

There are eight cameras on the exterior of the vessel, along with watertight doors and a double door at the galley. And as the Larry B. Whipple burns fuel, the crew will be able to transfer potable water to forward tanks to adjust the plane of the boat.

Inside the vessel, innovations include access to piping and wires, often through easy-to-reach panels. In the captain’s stateroom, plumbing is accessed by removing a pocketed shelf. With those innovations, the crew can pull wires anywhere in the vessel and isolate the water supply and repair plumbing—all without cutting into the walls.

“He just did that—all of this stuff he does extra and doesn’t charge for it,” said Butler, referring to Intracoastal Iron Works owner Raymond Viguerie. “One of his mantras is ‘Do more than the customer asks for.’ That boat is full of stuff that, I guarantee you, the owner and the operator don’t even know is there—but they will as they operate it.”

And inside the wheelhouse, the Larry B. Whipple features a compact, newly-designed console that provides easy access to all controls while maximizing visibility.

Viguerie said those tailored innovations flow from his relationship with the owner.

Like the story of Maritime Partners, Viguerie’s story is one of hard work, vision and determination. Viguerie said he only went to school through the eighth grade.

“Me and schools didn’t really get along,” he joked. “I caused enough problems that they asked me not to come back.”

Close to 60 years ago, his first job at a shipyard was picking up trash with a welding rod driven into a mop handle. Soon, he learned to weld, but he knew he wanted to move beyond that to actually designing and building boats on his own. Intracoastal Iron Works started out building aluminum-hull passenger vessels in the early 1990s and quickly moved into building towboats. Viguerie and his son, Peter, now lead the shipyard, which can build upwards of seven or eight towing vessels in a year.

A hardworking boat builder from South Louisiana, Viguerie, like Sperry, said it’s all about determination and vision.

“I tell people, it’s where you want to be in life,” he said. “It’s not going to be me or anyone else. It’s yourself. That’s what’s going to make you in life.”

See below for a slideshow with more photos from the christening ceremony (all photos by Frank McCormack): 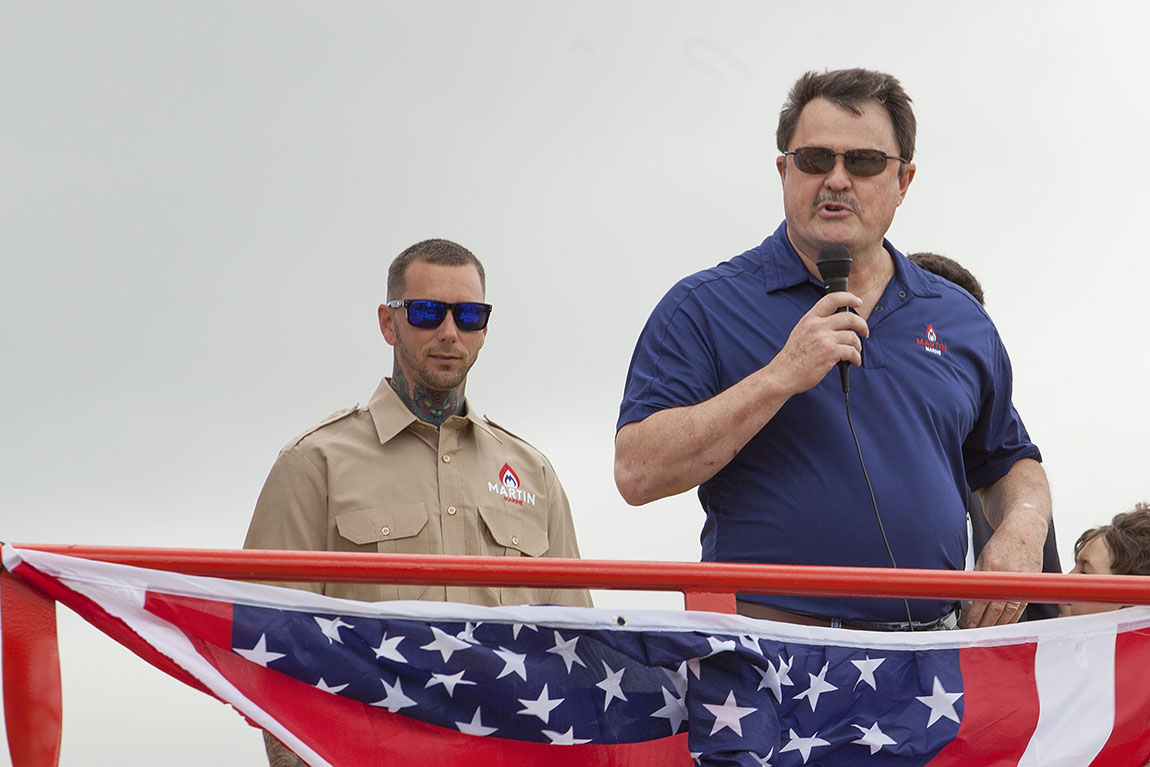 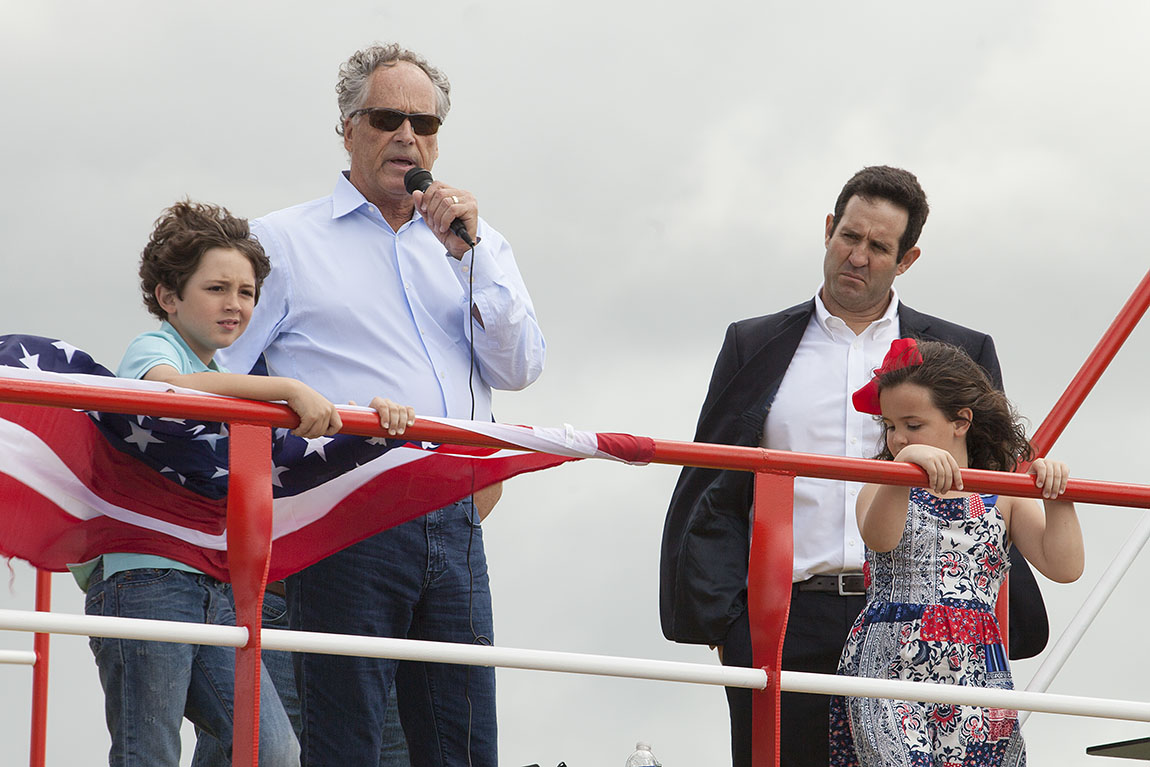 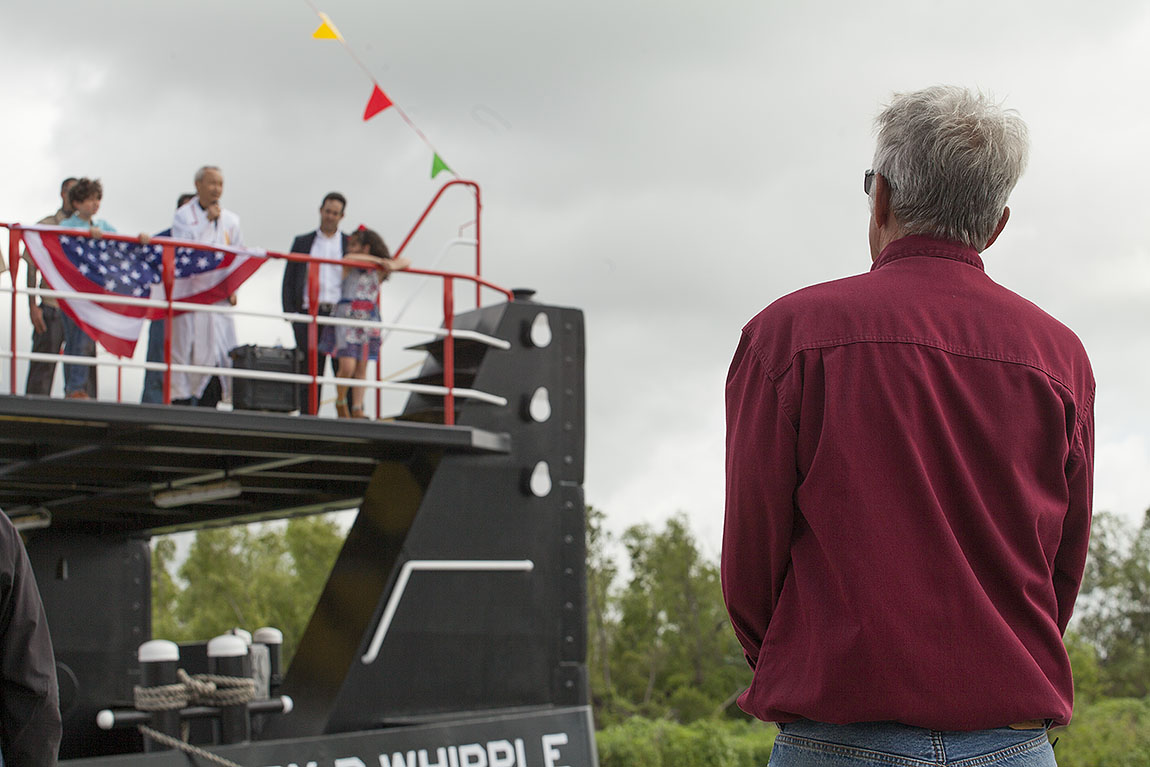 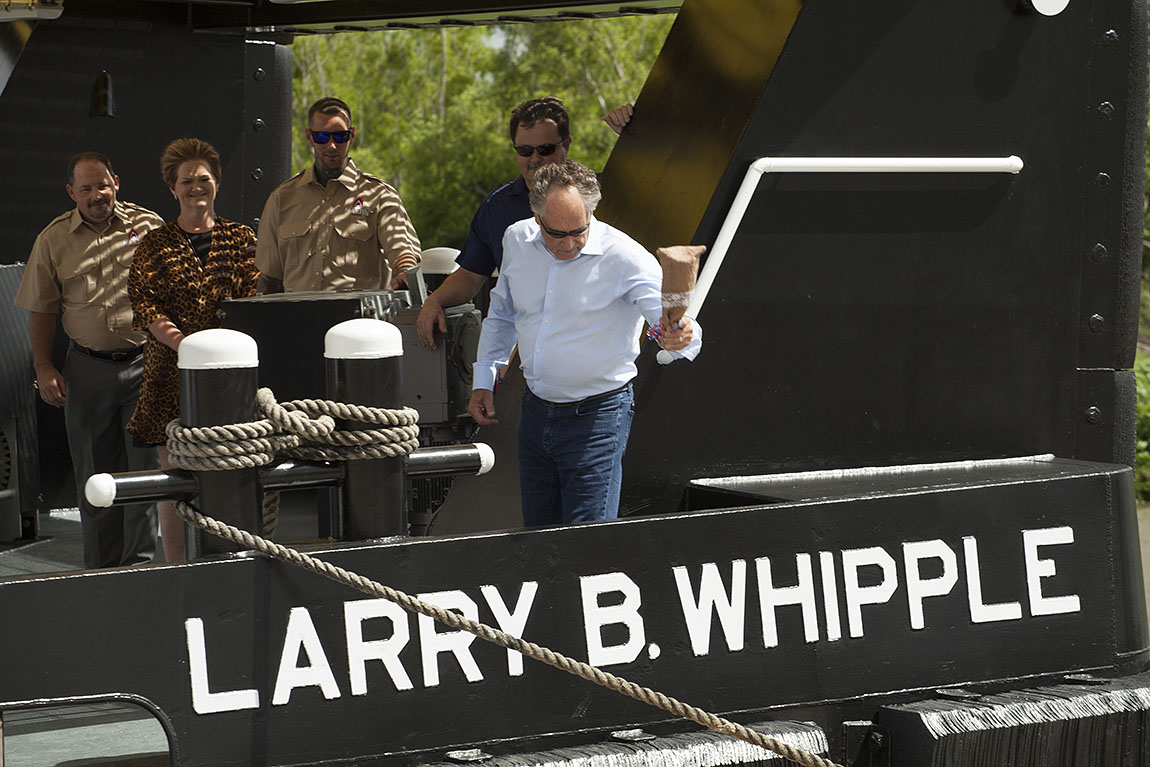 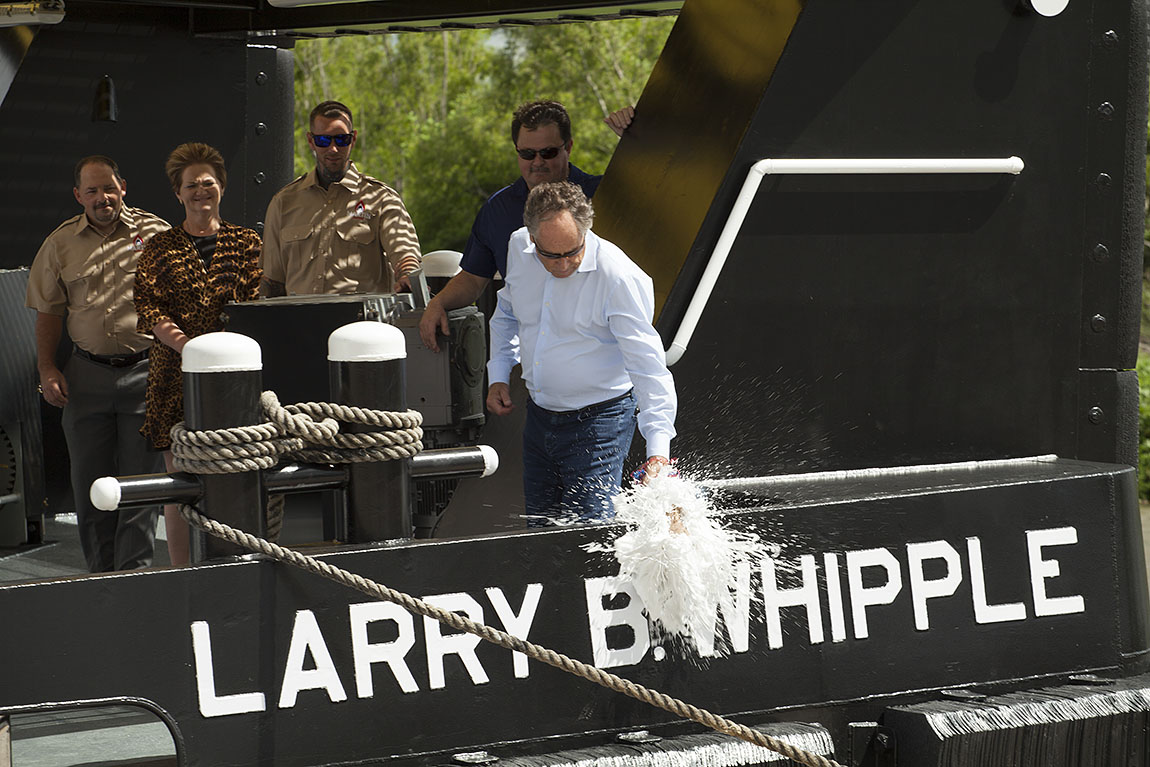 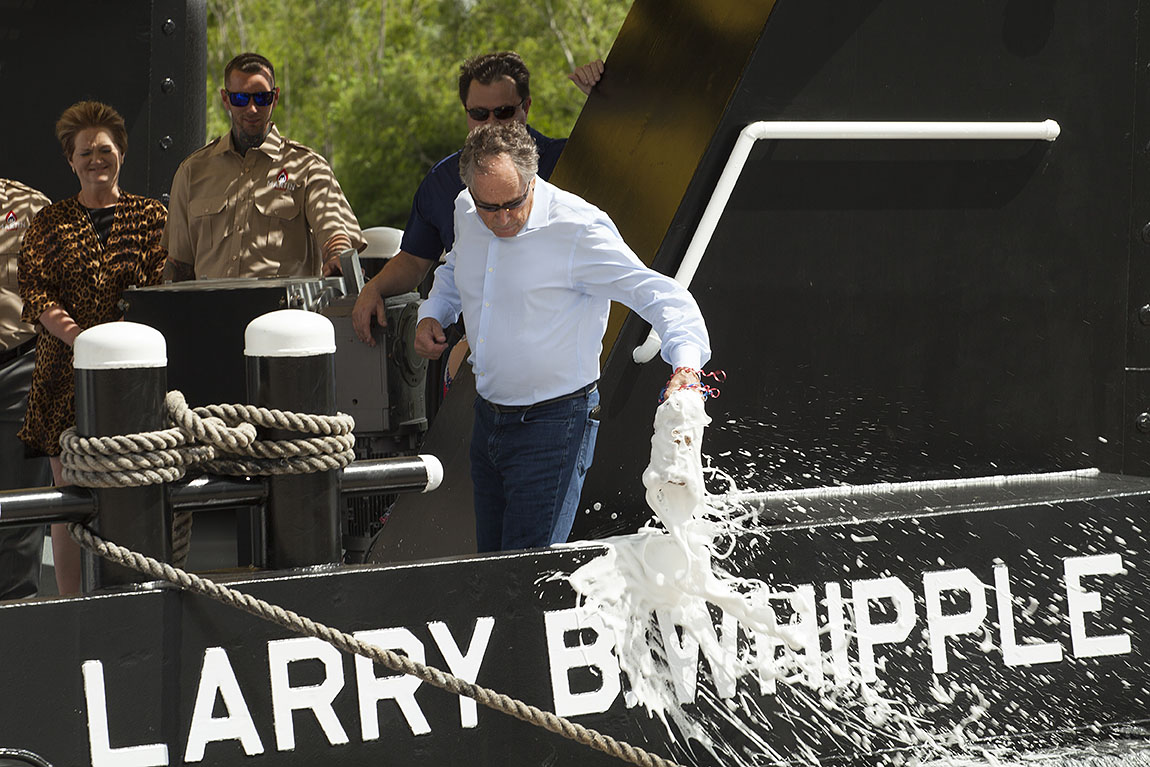 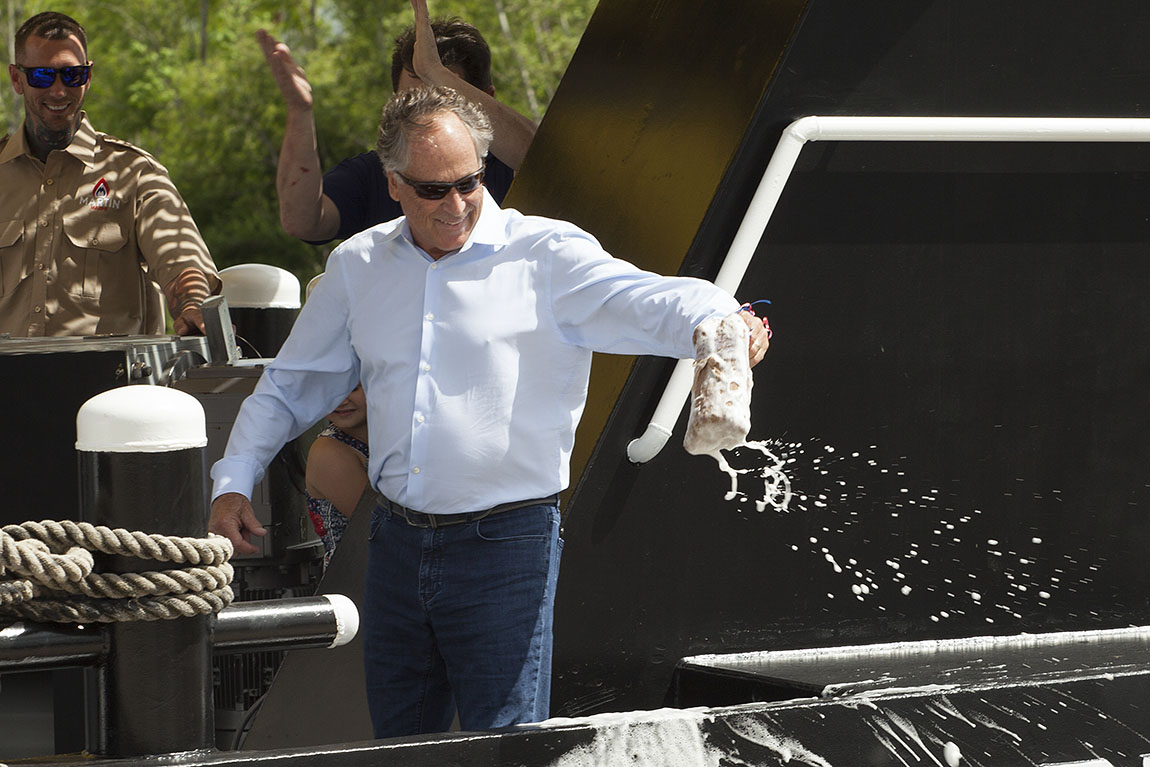 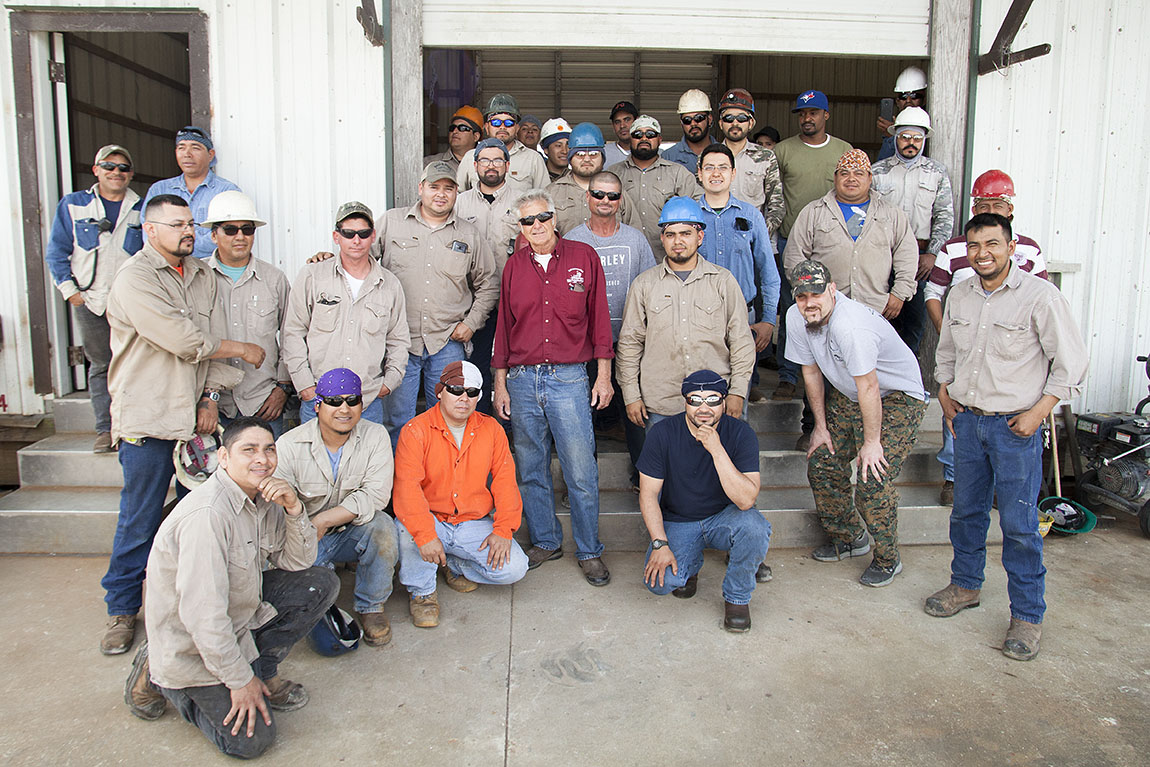 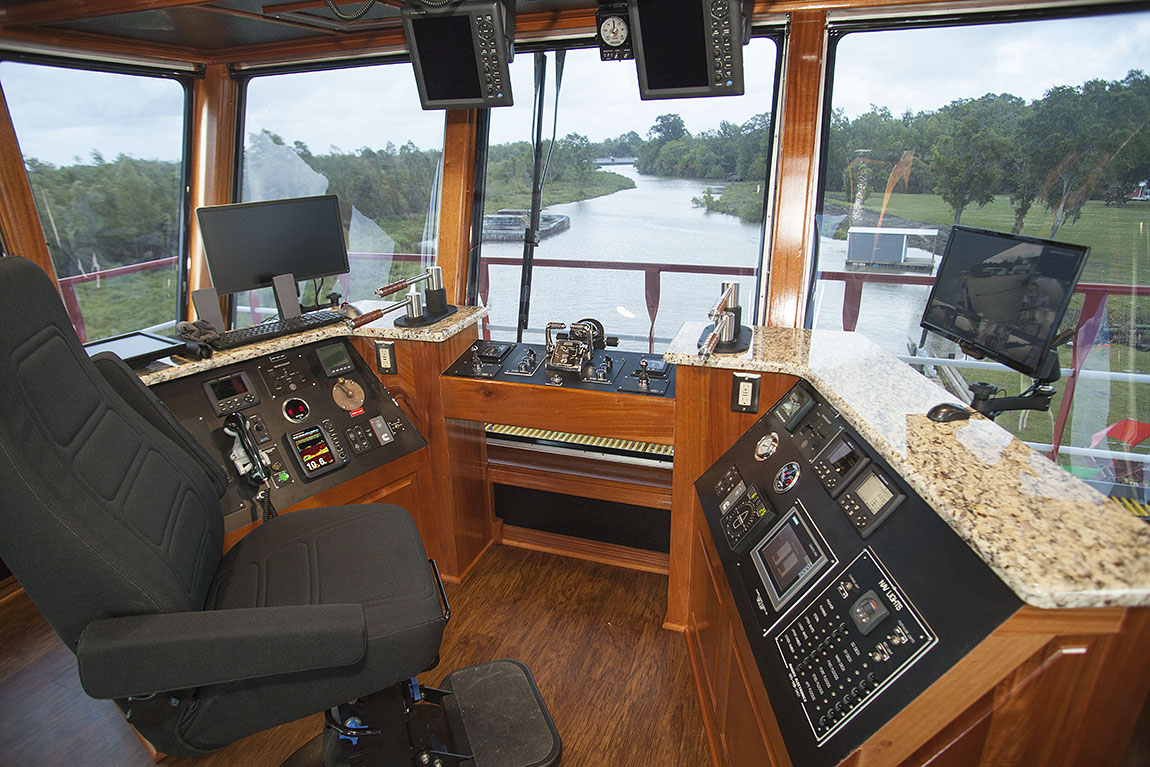 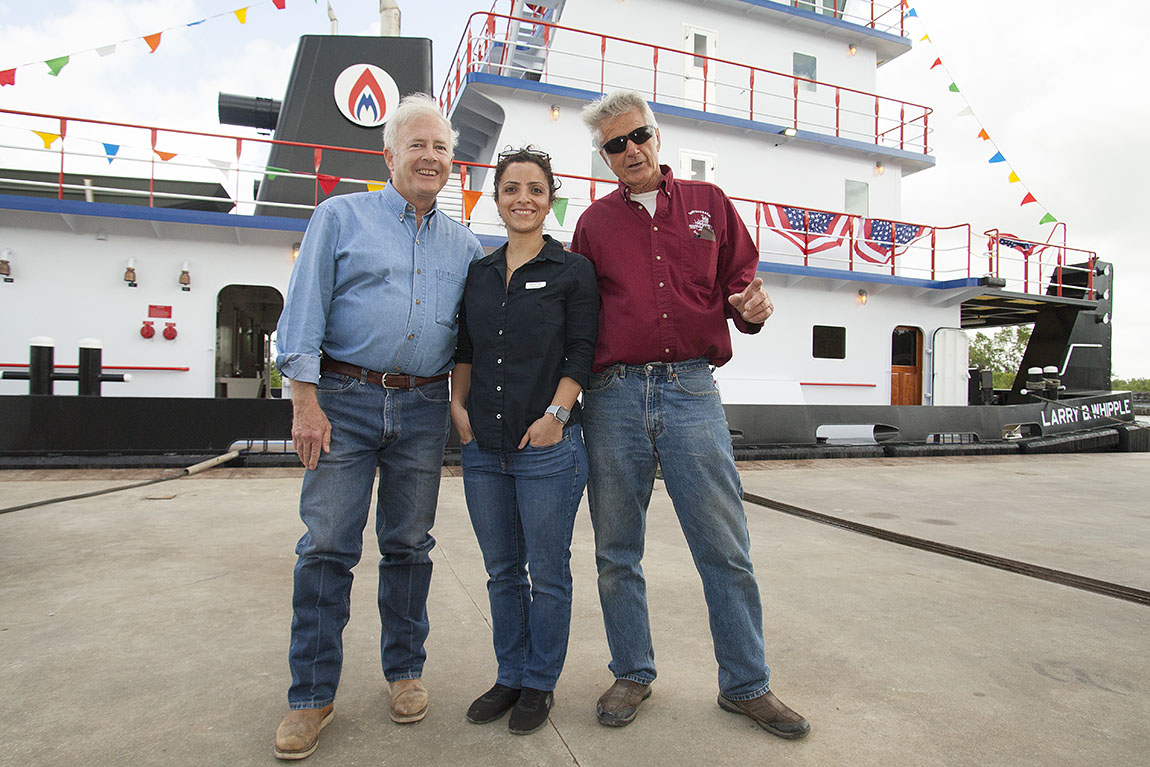