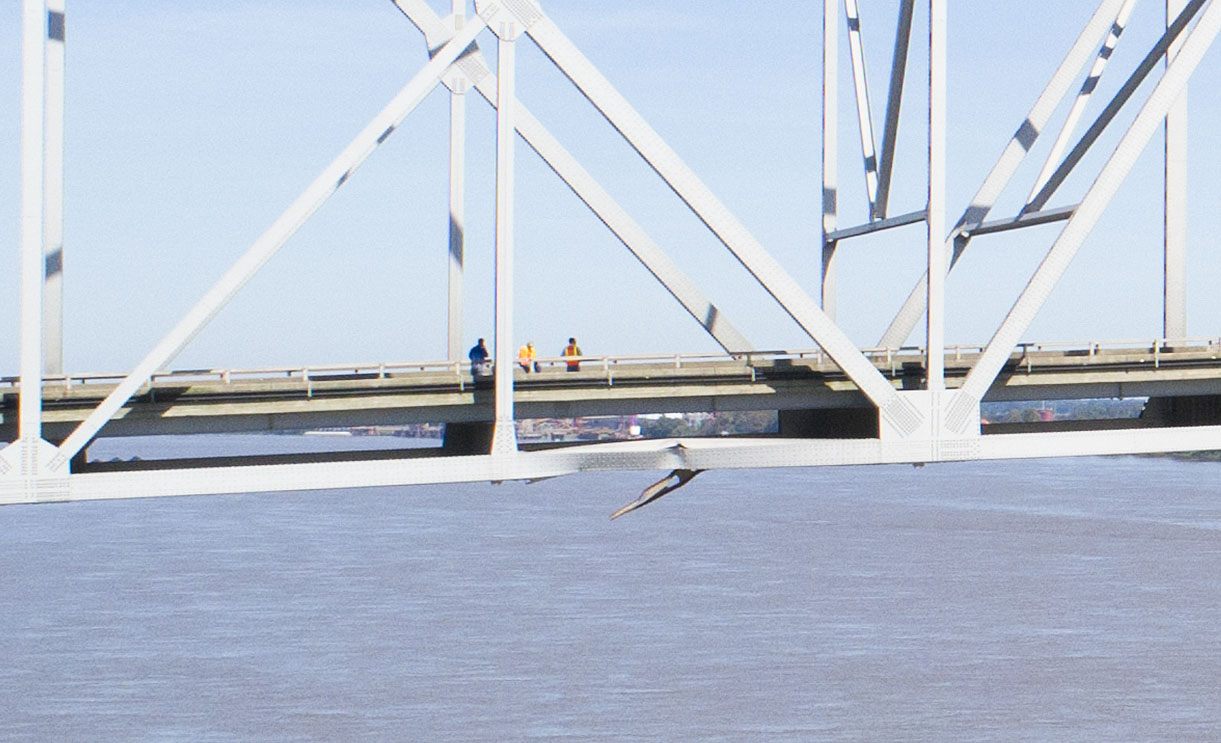 The crane barge allided with the bridge shortly before 2 a.m. that morning when the pilot attempted to guide the vessel and tow through the west bank span of the bridge. The Sunshine Bridge, a steel truss bridge, opened in August 1964, has a slight arch, making the outer spans lower than the middle span. The middle span of the Sunshine Bridge has an air draft of around 171 feet, while the air draft of the west bank span at the time of the incident was around 130 feet.

The impact severely damaged one of the bridge’s load-bearing beams, triggering a months-long bridge closure that snarled regional traffic patterns. The nearest alternate bridges across the river are at least 10 miles away and include the Veterans Memorial Bridge in Gramercy and I-10 bridge in Baton Rouge.

The public hearing opened with an interview with Capt. Desmond Smith, captain aboard the mv. Kristin Alexis at the time of the incident. Smith described the process of facing up to the barge-mounted crane as “chaos,” such that he didn’t initially take note of the crane’s obtrusive bucket. The Kristin Alexis crew was tasked with moving the Mr. Erwin from a terminal in Convent, below the bridge, to Cooper Consolidated’s fleet in Darrow, above the bridge. Smith said he requested the bucket be repositioned and then he moved the tow to the west bank to await further action. However, Smith then relinquished command to Capt. Eugene Picquet, the relief captain who would later pilot the vessel when it allided with the bridge. Smith said he did not specifically instruct Picquet to wait for the bucket to be moved. Picquet, as it turned out, continued on without waiting for representatives from Cooper Consolidated to reposition the crane’s bucket.

Following the interviews conducted on March 6, Damon Judd, president of Marquette Transportation Company, released a statement explaining the company’s stop work order as well as apologizing for the impact to residents in the area.

“Our Stop Work Responsibility policy gives each Marquette employee the authority to stop work immediately if they have a safety concern,” Judd said in the statement. “When an incident like this occurs, it is usually a series of decisions that leads to this outcome. Our industry relies on licensed mariners and the judgments they make in the wheelhouse of their vessel, as they deal with navigating the very dynamic system of our nation’s inland waterways.

“We take the safety of our operations very seriously,” he continued. “We support the efforts of the U.S. Coast Guard and the NTSB to bring more visibility to the public about what transpired. We apologize for the inconvenience this situation has caused citizens on both banks of the river.”

One of the more surprising revelations during the early days of testimony was that no one on board the mv. Kristin Alexis knew exactly how tall the crane stood above the water level. The vessel crew members and workers from Cooper said, at the time, they thought the height to be about 130 feet. The actually height was closer to 136 feet. That’s 6 to 8 feet taller than the west bank span of the Sunshine Bridge.

In testimony given May 9, David Miller, chief maintenance engineer for Louisiana Department of Transportation and Development, a 32-year veteran of the department, recalled the moment he learned about the allision.

“You know your day is not going to be a good one when you get a call from a bridge inspector at 4:30 in the morning,” Miller said.

Miller went on to explain the extremely serious nature of the allision. According to Miller, computer modeling following the incident indicated the strike very likely could have triggered a complete failure of the structure. Fortunately, weight was distributed sufficiently across the rest of the bridge’s members to remain intact until repairs were made. Repair costs, Miller said, are currently around $6.5 million.

The joint hearing of the U.S. Coast Guard and NTSB was expected to continue through May 11. The hearing is part of the Coast Guard’s marine casualty investigation into the event. The NTSB will issue a separate report and, if necessary, recommend regulatory or operational action to help prevent similar incidents in the future.

The Sunshine Bridge, built during songwriter Jimmie Davis’ second term as governor, is named after Davis’ signature song, “You Are My Sunshine.” First recorded in 1940, the song is an ode to Davis’ horse, Sunshine.

Caption for photo: Impact point on the Sunshine Bridge after October 12, 2018, allision. (Photo by Frank McCormack)