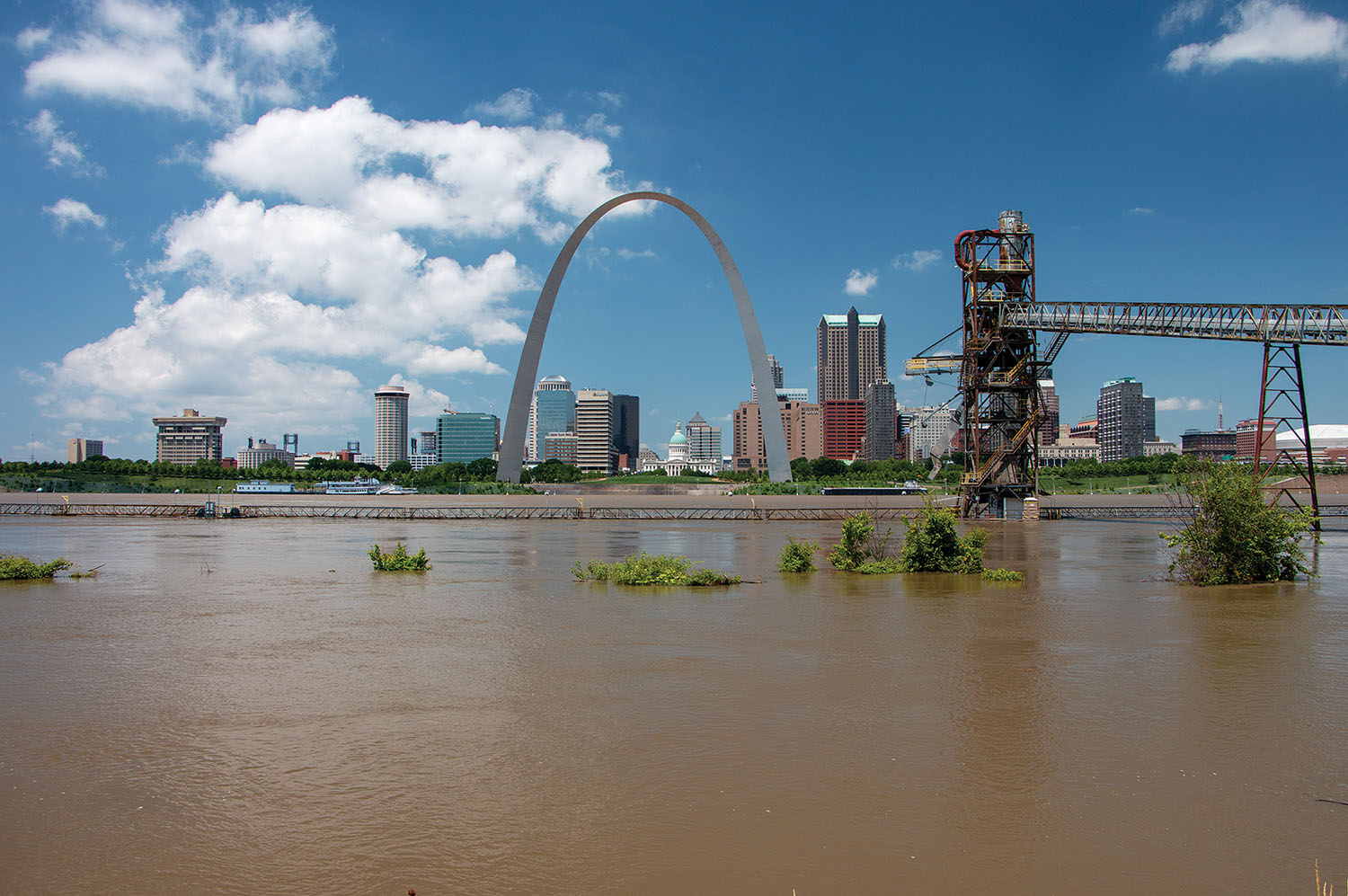 In the wake of a weekend of more flooding in St. Louis, which overwhelmed a downtown pumping station and breached several levees, officials of the St. Louis Engineer District and Coast Guard held a press conference to update the public on flood-fighting measures.

On June 2, the Mississippi River breached the Pin Oak levee in Winfield, Mo., flooding some homes and businesses. The river was a foot below the record set back in 1993.

The sudden rainfall, combined with already-high floodwaters, backed up a pipe into a pumping station in downtown St. Louis, flooding the main plant for a company that provides steam heat for downtown St. Louis buildings. The incident left several hotels, as well as Busch Stadium and the City Justice Center, without hot water. Boilers had to be rushed in from Chicago, Indianapolis and other areas.

The St. Louis area was forecast for a 46-foot crest on June 6, but another levee break at Hardin, Ill., on the Illinois River north of the city temporarily relieved flood pressure, and the forecast was altered to a foot lower.

The Rock Island (Ill.) Engineer District posted a notice that said June 4 marked the 81st consecutive day that the dam gates at Lock and Dam 15 in had been out of the water due to high water levels. The old record for consecutive days out of the water—37—was set in 2001. “This dam, like all dams within the District, is used to maintain the navigational channel and was not engineered for flood control,” the notice said.

Despite the incidents, the St. Louis region’s flood walls and levee system are generally holding firm. Since the historic flood of 1993, significant investments in levee and protective infrastructure in the St. Louis region has kept losses and damage down, according to Col. Bryan Sizemore, commander of the St. Louis Engineer District. On the Illinois side alone, Sizemore said, local communities and levee districts have spent about $100 million in strengthening the levee systems there.

Sizemore spoke at the June 3 press conference in downtown St. Louis, along with other top Corps and Coast Guard officials.

He began by offering thoughts and prayers for all those affected by the ongoing floods. “Our employees live in the region and are also affected,” he noted. He thanked the Corps’ flood-fighting partners, which include the Coast Guard, river towns, levee boards and districts and state and local governments.

Vessel operators may request permission to move within the closure zone. Vessel movements will be limited to monitoring waterway conditions and enhancing waterway safety.

“Safety of people, property, and environment is paramount,” said Stoermer. “The Coast Guard continues to monitor, communicate conditions, and prepare to respond during this extended high-water period.  We ask for the public to be vigilant and heed all warnings in the riverine environment.”

It’s not just barge traffic that’s slowed by the floods. The Union Pacific posted a map of rail closures, and some highways are also closed in Iowa, Missouri and Illinois.

John Osterhage, chief of readiness for the St. Louis Engineer District,  said that although about 20 segments of levees have been overtopped in the St. Louis District’s area of responsibility—which includes lower reaches of the Illinois River as well as parts of the Mississippi and Missouri rivers—overall, the levee system is performing better than in the Flood of 1993.

“Even if we reach ‘93 levels, the system will perform much better than it did then,” he said. Every day, the Corps and its partners monitor the system for three broad issues: levee overtoppings, underseepage, and any issues with aging infrastructure like culverts, flood walls or pumping stations.

Buyouts of property owners in low-lying areas after the 1993 flood have also reduced damage, Sizemore said. In response to a question, he said the district has no plans to open the Birds’ Point-New Madrid Floodway. It is located on the west bank of the Mississippi River just below the confluence of the Mississippi and Ohio rivers. That floodway was last breached deliberately by the Corps to protect Cairo, Ill., during the floods of 2011. The decision was controversial because it flooded productive farmland. Landowners near the levee have an easement in their deeds allowing for that possibility, but they were not compensated for flood damage.

At the time of the press conference, the lower Illinois River was still nearing its latest crest; Sizemore said the river could well see more levee overtoppings there.

Joan Stemler, chief of the St. Louis District’s water control operations, said she remembered the Flood of 1993, and the level of damage is not approaching that flood. “The Missouri River has crested, the Mississippi is cresting today, and the Illinois River has about a foot more to rise,” she said—although she noted that more rain is forecast in the near future. Local reservoirs “have held back a tremendous amount of water,” she said.

The Ohio River crested at Cincinnati at 33.42 feet June 2, well below flood level of 54 feet. But the Ohio River valley, too, has received rain from some of the storms moving across the Midwest.

Asked what his major concern was, Sizemore said it was the possibility of members of the public ignoring safety instructions. “The top of a levee is no place to take pictures,” he said. Stoermer said conditions made it impossible for the Coast Guard to undertake rescue operations that would endanger crews.

The Corps reported June 5 that much-above-average runoff in the upper Missouri River basin (above Sioux City, Iowa) extended into May following widespread and heavy rainfall in South Dakota and Nebraska.

Additionally, widespread and heavy rainfall in the lower basin, particularly Kansas, has led to large tributary and Missouri River flows downstream of the six main stem reservoirs on the Missouri River.

May runoff in the upper basin (north of Sioux City, Iowa) was 8.9 million acre-feet (maf.), which is 267 percent of the average May runoff of 3.3 maf. May runoff was the second highest on record, only surpassed by 2011’s 9.2 maf. Runoff in the Fort Randall Dam to Gavins Point Dam reach was 1.4 maf, which is more than the average annual runoff for that reach.

The Arkansas River is experiencing its highest-ever flood levels in many places. The entire river is expected to be closed to navigation until mid-July at least. Fifteen counties along the river were bracing for record crests; at least 10 locations have recorded highest-ever levels.

President Donald Trump approved an emergency declaration for the state on May 30. The total extent of damage won’t be known until the water recedes, but Arkansas Gov. Asa Hutchinson has said the Arkansas River flooding is costing the state’s farms and businesses $23 million a day.

Corps officials said levees and navigation structures along the Arkansas River are performing well, considering that the system was not designed for flood control. They warned that even when the water begins dropping after the crest, the current will remain swift and dangerous.

Bryan Day, executive director of the Little Rock Port Authority, told local media June 4 that 85 barges are immobilized in Little Rock’s slack-water harbor. He said harbor operations were halted at least until the following week. Flooding has also halted some rail traffic out of the port.

Caption for photo: The flooded Mississippi River at St. Louis on June 5. (Photo by John Shoulberg)