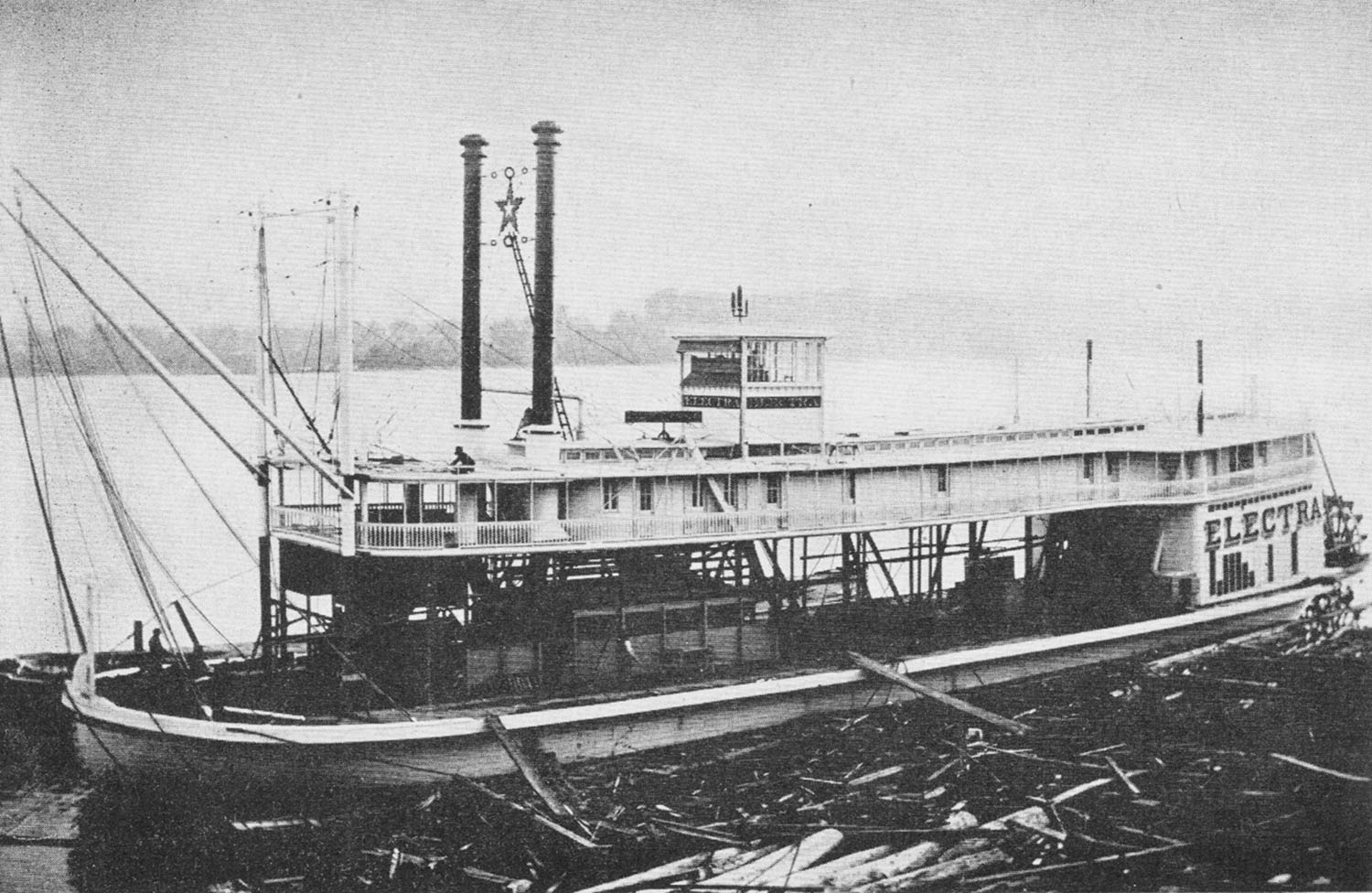 For a contract cost of $17,000, the packet Electra was ordered from the Howard Shipyard at Jeffersonville, Ind., in 1897.

The sternwheeler was constructed on a wooden hull measuring 170 feet in length by 35 feet in width. Two boilers supplied steam to engines having 14-inch cylinders with a 5-foot stroke. A large star was suspended between the smokestacks and, in lieu of numbers, all the staterooms on the steamboat were named for flowers.

The boat was built for Red River service, plying the New Orleans-Shreveport trade, under the command of Capt. Jack Brinker, who also was part owner. The Electra, along with the Alma, Gem, Sunrise and W.T. Scovell, composed the Red River Line until the company went into receivership; the Electra survived all the other boats of the line.

The vessel had a close call when, on May 29, 1899, while downbound on the Red River at Salem Bayou, fire broke out in the cargo of cotton; the blaze was quickly extinguished and the loss was estimated at $300.

New owners from Nashville purchased the steamer in 1905 and operated it, with the packet Red River, on the Cumberland River under the banner of the Cumberland River Packet Company. By 1907, the steamboat was running in the St. Louis-Missouri River trade, later operating in the corn trade out of Cairo, Ill. In the late fall of 1911, the riverboat ran in the Mobile-Montgomery trade.

The last year with Nashville listed as the home port was 1911, and by the following year, the Electra was a “fill-in” packet that reportedly spent much time laid up for lack of business. The boat was owned at that time by Capt. Matt Jackson, of Mobile, who first attempted the Tombigbee River as the arena for trade. Later, Jackson ran the boat on the Alabama River.

In the spring of 1912, a U.S. Marshal sale was held at which rumors abounded that the Carter Brothers, of New Orleans, might purchase the boat and operate it in the Mobile trade. It was a well-known fact that Capt. Owen Burke did not want the Carters at Mobile and he bid high enough ($7,000) to buy the Electra for the Burke Line. During that year, the boat made a trip to Columbus, Miss., and is said to have been the last packet to visit that town.

Renovations to the riverboat included the construction of a texas deck, and the name was changed to Sunny South. Again, it was reported that the boat spent a lot of time laid up opposite downtown Mobile. Shrimp liked the brand of oakum used in the hull and feasted upon it until the boat sank; a tug came to the rescue and pumped out the hold.

In early 1916, the Sunny South was purchased by new owners on the Mississippi River. As reported in The Waterways Journal, on April 20, while 20 miles out of Mobile, on Mobile Bay, the steamboat sank in 17 feet of water. It had earlier that morning sprung a leak and the bilge pumps were unable to keep up with the inflow. The sternwheeler capsized, and all the crew jumped overboard and were rescued by the tug Claude. The riverboat was a total loss, but the new owners lost nothing as they had purchased the Sunny South subject to safe and secure delivery at New Orleans.

Caption for photo: The Electra as a new boat at the Howard Shipyard, Jeffersonville, Ind., 1897. (Howard Steamboat Museum collection)