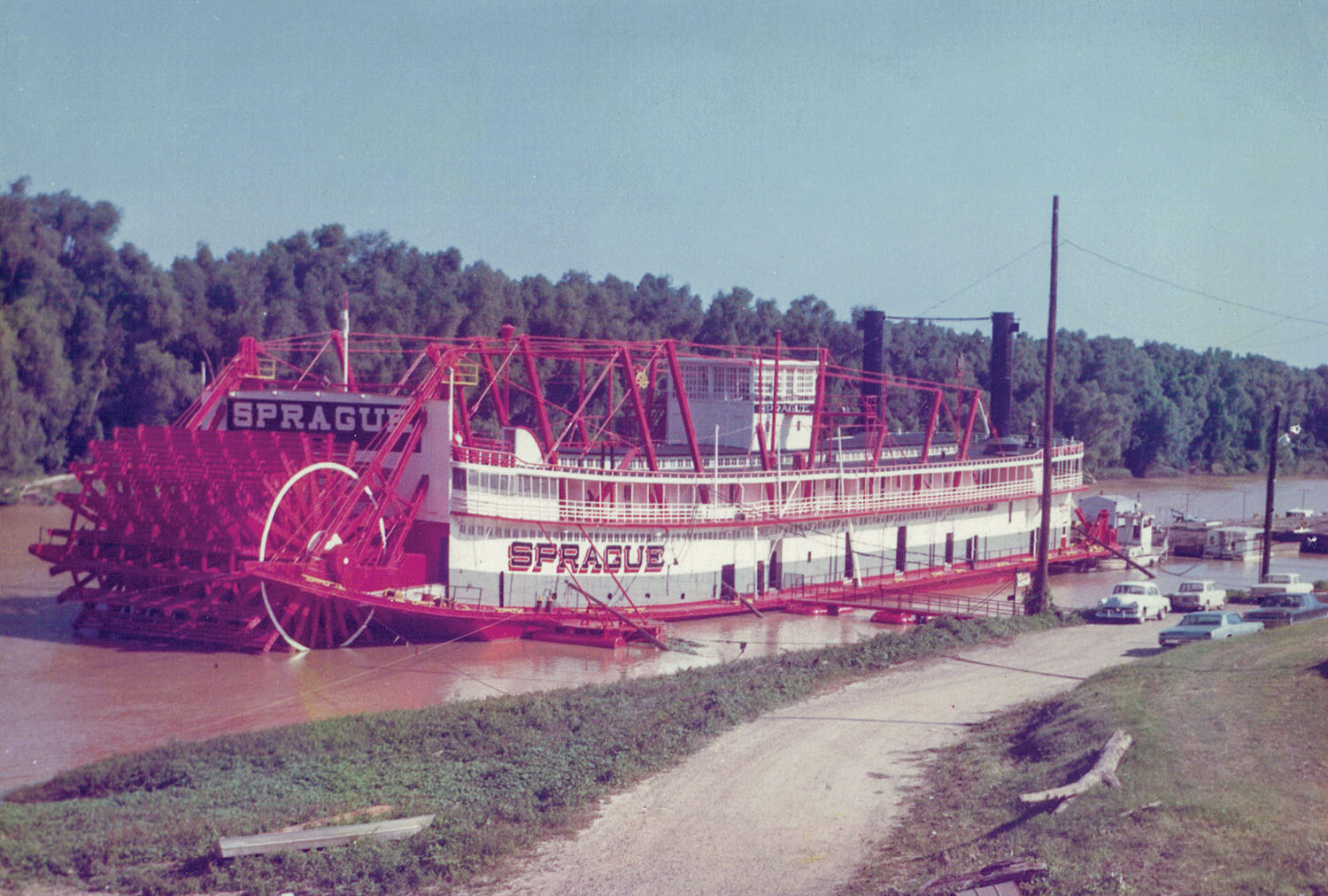 50 Years Ago Aboard The Str. Sprague

It hardly seems possible that five decades have passed since this writer, as a 15-year-old, first visited the famous steam towboat Sprague in June of 1969. I shall never forget my first glimpse of the huge vessel, resplendent in fresh paint and gleaming in the sunlight at the Vicksburg waterfront.

For two years prior, I had avidly read everything I could find about the “Big Mama of the Mississippi,” as the world’s largest towboat was affectionately known. Going aboard the renowned riverboat with my parents and maternal grandparents, I was consumed with awe at each deck of the big sternwheeler. As we ascended to the spacious pilothouse (26 by 20 feet) with its 13.5-foot pilotwheel, the kindly lady tour guide (whom my grandfather had apprised about his steamboat fanatic grandson) granted permission for me to touch the wheel; I was in heaven!

Constructed at Dubuque, Iowa, in 1902, the Sprague was built by the Iowa Iron Works, which later would evolve into the Dubuque Boat & Boiler Company. The steel hull measured 276 feet in length by 61 feet in width. The compound condensing engines (also built by Iowa Iron Works) had a 12-foot stroke and were rated at 2,079 hp. Originally coal-burning, the towboat had storage capacity for 20,000 bushels of coal. Later, four oil-burning Foster-Wheeler steam generators were installed.

Named for Capt. Peter Sprague, a Pittsburgh boat builder, the boat was owned by the Monongahela River Consolidated Coal & Coke Company; the firm was also known as the Combine. The overall length of the towboat was 318 feet, including the sternwheel, which was 40 feet in diameter. The massive paddlewheel turned no more than seven revolutions per minute; it was reduced (in 1903) to 38 feet and the revolutions increased to nine.

The Sprague, which carried a crew of 55, ran its trial trips in the St. Louis harbor on September 2, 1902, before departing on a longer journey down the Mississippi to Cairo, Ill. During the return trip to St. Louis, a problem with the reversing gear caused a collision with the showboat Temple of Amusement, cutting the floating theatre in half. Fortunately, no lives were lost, but the owners of the Sprague were ordered to pay $12,000 for a new showboat. In 1907, the boat set a record for handling more than 67,000 tons of coal from Louisville to New Orleans, a tow composed of 56 coalboats and four barges that covered nearly seven acres.

Later owned by Standard Oil Company, the legendary steamboat was retired on March 5, 1948, with a decommissioning ceremony at Memphis. A civic group at Vicksburg approached oil company officials regarding obtaining the boat for a tourist attraction; the request was granted for the sum of $1. Towed up into the Yazoo, the Sprague was converted into a river museum, showboat theatre and restaurant. The boat made a brief appearance in the 1951 movie version of the novel “Show Boat,” and was loaned to the city of Pittsburgh for its bicentennial celebration in 1959.

On the night of April 15, 1974, the Sprague was ravaged by fire, allegedly set by an arsonist. The charred hulk was moved up the Yazoo and beached while rebuilding plans languished; later it was refloated and returned to the Vicksburg city front. Although funding was appropriated for the project, the hull cracked just forward of the engineroom and the boat sank, eventually being scrapped.

Numerous artifacts survive (including the whistle) in museums, and various pieces and parts can still be seen at Vicksburg as reminders of the once mighty towboat Sprague.