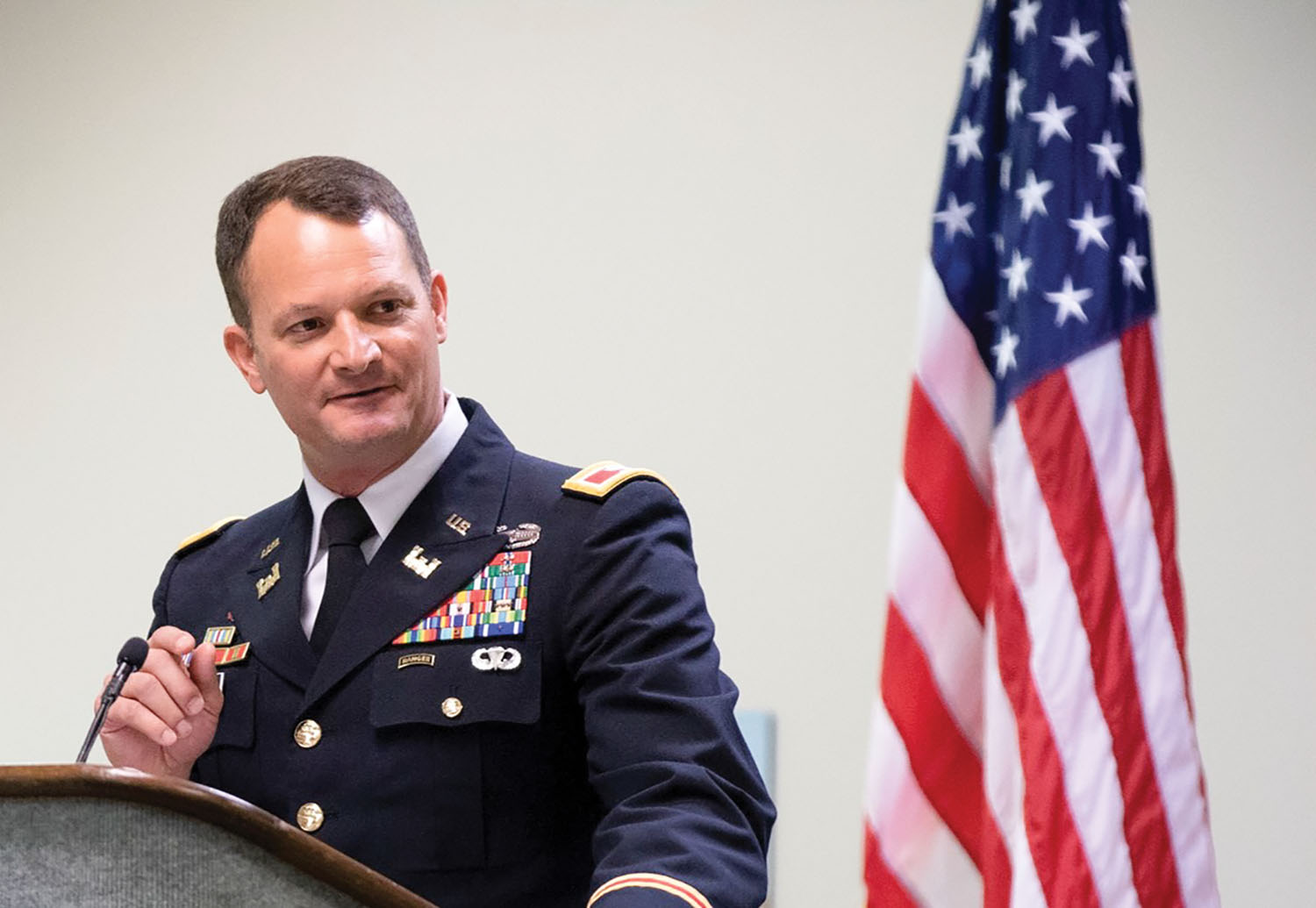 In addition to the command change at the Great Lakes and Ohio River Engineer Division July 12, a number of Corps of Engineers districts and Coast Guard units along the inland and Gulf Intracoastal waterway systems have held change-of-command ceremonies in recent weeks. Here is a rundown of some of the changes:

Col. Robert Hilliard assumed the duties of commander of the Vicksburg Engineer District June 26. He came to the district after serving as the deputy commander for the Mississippi Valley Engineer Division.

He relieved Col. Michael Derosier, who had served as district commander since July 2016. Derosier will start a new assignment at the U.S. Africa Command, headquartered in Stuttgart, Germany.

A native of Georgia, Hilliard graduated from Auburn University in Alabama, where he received his commission in the U.S. Army Corps of Engineers in 1996.

Russell comes to Houma from the Coast Guard Training Center in Yorktown, Va., where he had served as marine safety training branch chief since July 2015. In that post, Russell oversaw inspections and investigations, port operations, preparedness and emergency response, the marine science technician “A” school, the container inspection training and assist team, and the National Strike Force Center of Expertise.

MSU Houma’s outgoing commander, Capt. Blake E. Welborn, who assumed command of the unit in June 2017, won’t have to move far for his next assignment. Welborn will now serve as director of western rivers with the Eighth Coast Guard District, located in New Orleans.

“I would like to thank the maritime community and our sister agencies of South Central Louisiana for their support during my tenure here,” Welborn said. “You have been tremendous partners and friends of the Coast Guard. I would also like to wish Capt. Russell the very best as he assumes command.”

As commander of MSU Houma, Russell has the roles of captain of the port, federal maritime security coordinator, federal on-scene coordinator, the officer-in-charge of marine inspections, marine investigations, and port safety and security in the Houma area, which includes waterways shared by both commercial and recreational vessels.

Avichal comes to the Nashville District from the New England District in Concord, Mass., where he served as deputy commander. As commander of the Nashville District, he assumes responsibility for managing the water resources development and navigable waterways operations for the Cumberland and Tennessee River basins covering 59,000 square miles, with 42 field offices touching seven states and a work force of over 750 employees.

Avichal received his U.S. Army commission in 2002 and has served in leadership and staff positions in Iraq, South Korea and multiple locations in the United States during his Army career. During his previous assignment with the New England District, he deployed to San Juan, Puerto Rico, in support of Hurricane Maria recovery efforts, and to Erbil, Iraq, where he served as deputy commander of the Mosul Dam Task Force.

Avichal holds a Bachelor of Science degree in Civil Engineering from the United States Military Academy and a Master of Arts degree from Webster University. He is a licensed professional engineer in the state of Virginia.

Toy lauded the outgoing commander, Lt. Col. Cullen Jones, and noted how Jones had mentioned that his opportunity to command provided him the privilege of listening to, learning from and leading great teams through challenging times in the pursuit of worthy causes.

“Cullen has done an excellent job. His experience, leadership and his high standards, his push to get the best from his staff, contributed to the great success that the Nashville District has enjoyed,” Toy said.

Merchant will transfer to Harvard University where she will serve as a National Security Fellow at Harvard Kennedy School’s Belfer Center for Science and International Affairs.

Marine Safety Unit Chicago’s area of responsibility includes a fleet of 201 inspected vessels and 118 regulated waterfront facilities on the Lake Michigan shorelines of Illinois and Indiana, as well as 186 miles of the Illinois Waterway System including seven locks and more than 250 bridges.

Col. Timothy Vail relieved Col. Lars Zetterstrom as commander of the Galveston Engineer District July 2 during a ceremony at the district’s Jadwin Building.

He served as a trainer and evaluator at the National Training Center, Fort Irwin, Calif., and deployed as the Corps deputy Arabian Gulf engineer for construction operations in Kuwait, Qatar, Oman, United Arab Emirates, Yemen and Bahrain. Later, as operations officer of 2nd Engineer Battalion, White Sands Missile Range, N.M., he deployed to Afghanistan during Operation Enduring Freedom. Upon redeployment, he was assigned to the RAND Corporation Headquarters, Santa Monica, California, as an Army research fellow.

Following his fellowship, Vail was assigned to the Pentagon’s Office for the Deputy Chief of Staff for Programs, (G-8) in the Force Development Directorate, Full Dimension Protection Division. He then was selected for command of the U.S. Army Corps of Engineers Walla Walla District, where he oversaw the district’s mission for hydropower production, inland waterways navigation, flood risk reduction, environmental stewardship and recreation from Oregon to Wyoming across the entire Snake River Basin.

Following command, Vail was selected by the assistant secretary of the Army for civil works to serve as her military assistant, supporting her execution of oversight duties over the entirety of the Corps’ civil works mission. Vail assumed duties as the chief of the Requirements Determination Division, Maneuver Support Capabilities Development Integration Directorate for U.S. Army Futures Command in 2018.

The Tulsa Engineer District welcomed a new commander during a change-of-command ceremony July 8 presided over by the Southwestern Engineer Division Commander.

Brigadier Gen. Paul Owen, Southwestern Division Commander, received the Corps of Engineers flag from the outgoing commander, Col. Chistopher Hussin, and passed it to Col. Scott Preston during the ceremony at the Tulsa District headquarters.

Preston comes to the Tulsa District after graduating from the Marine War College at Quantico, Va. He hails from Liberty, Mo., where he is a licensed Professional Engineer in Missouri and a Certified Project Management Professional.

Hussin presided over the Tulsa District during one of the heaviest floods in the Tulsa District’s 80-year history and provided leadership during a time of intense rainfall in Kansas and eastern Oklahoma. He thanked members of his family and “Team Tulsa.”

“As bittersweet as this is, I can’t help but smile thinking about what’s ahead for Scott,” said Hussin. “I’ve coined a new phrase over the last couple of weeks; I’ve called this the ‘Heart of Awesomeness.’ Welcome to the ‘Heart of Awesomeness’ but I know the workforce and our support communities in Oklahoma, Kansas and Texas will welcome you with open arms.”

Cost has served as the commanding officer of the unit since July 2016. During that time, he led the Coast Guard’s maritime safety, security, and environmental protection missions throughout an 8,400-square-mile area of responsibility in southwest Louisiana, the 11th busiest tonnage port in the nation. Most notable has been the Coast Guard’s instrumental role in managing the rapidly expanding marine transportation system as the area prepares to lead the nation in the export of liquefied natural gas.

“It’s been an honor to serve our country here in Southwest Louisiana,” he said. “I’m truly humbled by the strong partnerships the Coast Guard has with this amazing community.”

Cost and his family are moving to the Washington, D.C., area, where he’ll be the executive officer of the Marine Safety Center, the Coast Guard’s technical center of expertise for the safety and security of commercial vessels and floating offshore facilities.

Jensen is arriving from Coast Guard Sector Puget Sound, where he served as the chief of prevention. During his over 20 years in the Coast Guard, Jensen has served as program manager at Coast Guard Headquarters for Waterfront Facility Safety, a senior investigating officer at Sector Honolulu, chief of the inspections division at Sector Juneau, and marine safety team supervisor in Maui, Hawaii.

Prior to assuming this command, Jansen most recently served as executive officer to the commanding general of the U.S. Army Corps of Engineers in Washington, D.C.

A Colorado native, Jansen earned his commission from the United States Military Academy at West Point in 1997. His prior assignments include 72nd commander of the Corps’ Buffalo District and tactical assignments at Fort Polk, Louisiana; Schofield Barracks, Hawaii; and Fort Stewart, Georgia.

The district traces its origins to 1866, when Congress authorized the Corps of Engineers to establish a 4-foot navigation channel on the Upper Mississippi River. Maj. Gouverneur K. Warren, a West Point graduate widely acclaimed for his leadership at the Battle of Gettysburg, was tasked with establishing the district and conducting preliminary surveys of the Mississippi River and its tributaries. Warren arrived in St. Paul and opened the first district office in August 1866.