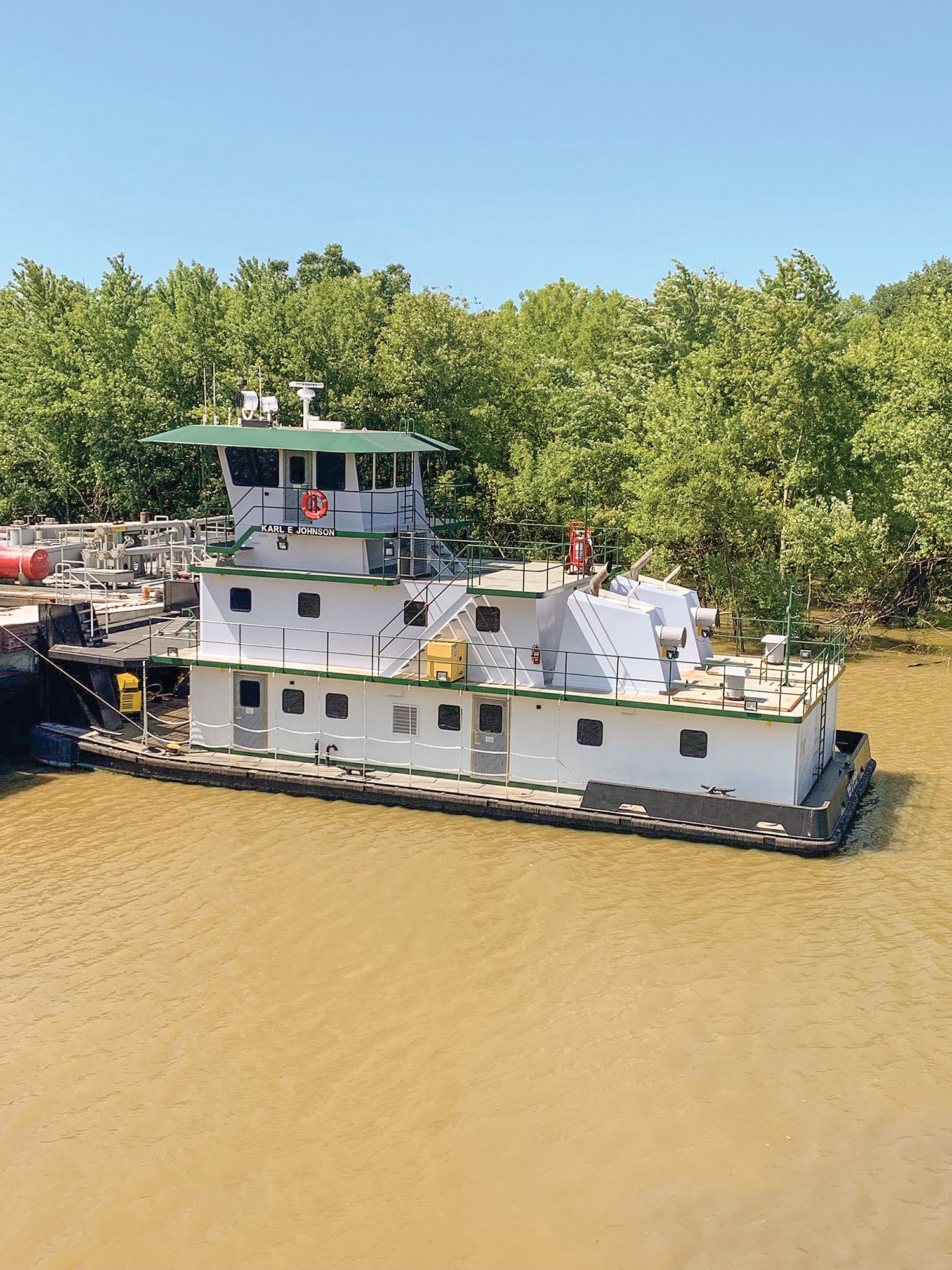 Trapped on the Kaskaskia River as this is written, waiting for the high water on the Mississippi River to recede, is a new towboat built by Barbour JB Shipyard and owned by Southern Illinois Transfer Inc., Sparta, Ill. The boat is ready to be put through its paces but has been stranded between Miles 8 and 18 on the Kaskaskia since it was launched.

“We need to see the Mississippi at around 30 on the Chester gauge to get it under all the bridges,” said owner/builder Kurt Johnson. “From what we can tell, running it on the Kaskaskia a little bit, we think it will out-push the Kaskaskia Warrior. We plan to do a little bow-to-bow contest once we get it on the big river.”

The Kaskaskia Warrior is a 68-foot, 1,500 hp. conventional towboat that Barbour JB Shipyard built for Southern Illinois Transfer last year. The new boat, same size and hp., is a Z-drive.

Named Karl E. Johnson after Kurt Johnson’s late brother, the new boat was designed by Sterling Marine. It measures 68 by 28 by 9.6 feet and utilizes a time-proven, double-chine hull that was developed by Barbour Metal Boat Works years ago. The pilothouse eye level is 27 feet.

The new vessel, a lunch-bucket boat, is powered by twin Cummins QSK19 engines coupled to Twin Disc’s Veth model VZ 700 Z-drives and Veth electric-over-hydraulic steering controls. Auxiliary power is from Kubota 40 kw. generator sets. There is tankage for 14,468 gallons of fuel, 1,900 gallons of fresh water and 350 gallons each of lube, gear and hydraulic oil.

The engines are cooled by Fernstrum coolers, engine alarms are Cummins/Murphy, and fire safety is provided by heat and smoke detectors from Cintas. There is a Carrier 5-ton heat pump with a 20 kw. heat dual zone system. The electronics package includes Furuno radar, Furuno AIS and Standard radios. Deck equipment includes Wintech 40-ton winches. The hull is protected by M&M Bumpers. Sherwin-Williams supplied the marine coatings.

The Karl E. Johnson is the third towboat to be completed by Barbour JB Shipyard. The first, delivered in 2016, was the David J. Bangert, a 55-foot, 1,320 hp. vessel. The second was the Kaskaskia Warrior. A fourth, currently under construction, will be a Z-drive, same as the Karl E. Johnson, only with a retractable pilothouse.

Kurt Johnson started the shipyard in partnership with George Foster, owner of JB Marine Service, in 2016. Foster had the Barbour blueprints from when he and Tom Rollins owned Barbour Metal Boat Works. After delivering the first boat, the David J. Bangert, to Gateway Dredging & Contracting, Johnson became sole owner.

Caption for photo: The Karl E. Johnson is similar to last year’s Kaskaskia Warrior, except that it has Z-drives. (Photo courtesy of Barbour JB Shipyard)