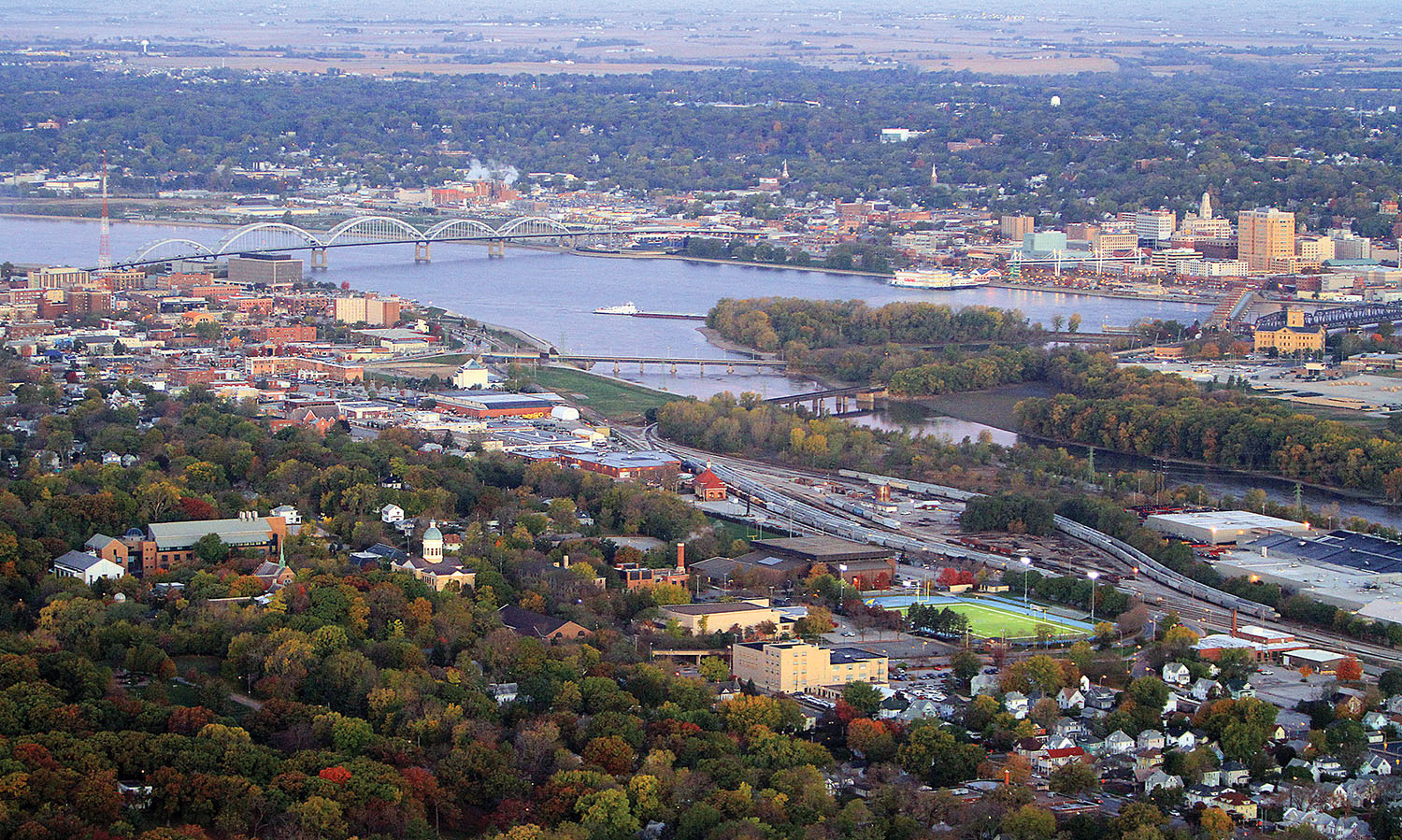 Situated on opposite sides of a westward-running stretch of the Upper Mississippi River, the towns of Moline, East Moline and Rock Island in Illinois, and Davenport and Bettendorf across the river in Iowa, make up the Quad Cities region.

Davenport, the largest city of the five, had a population of more than 100,000 in 2016. The Quad Cities metro area (Scott County in Iowa, and Rock Island County and Henry County in Illinois) has about 500,000 people altogether.

Important industries today are advanced metals and materials, responsible for transforming raw or already manipulated materials into new finished products or components, including Genesis Systems and Cobham Mission Systems. In Davenport, the Arconic aluminum rolling mill in Davenport is a major customer for barged commodities. Rock Island Arsenal is a major military installation, home to the Corps of Engineers Rock Island District, Army Sustainment Command, and Rock Island Arsenal Joint Manufacturing and Technology Center, the only multi-purpose and vertically integrated metal manufacturer in the Department of Defense.

According to a 2014 fact sheet on Iowa prepared for the Office of the U.S. Trade Representative, the Quad Cities is the regional multi-modal transportation hub for merchandise exports, with nearly $8 billion in total exports (which dwarfs the exports of all other areas in the region). Iowa’s primary trading partners for waterway shipments (including commodities shipped to and from Iowa barge terminals) are Illinois, Minnesota, and Louisiana.

Alter River Terminal is the largest commercial river terminal in the immediate Quad Cities area. Its Rock Island terminal handles fertilizer, pig iron and aluminum. Another Alter terminal facility in nearby Davenport, Iowa specializes in heavy lift and specialty cargoes, including blades and turbines for windmills. Iowa is a leading wind power state, with efforts to develop wind power going all the way back to a 1983 law. Windmills dot the state, concentrated in the north and west. In Davenport, sister company Alter Trading, a metal recycling plant, accepts ferrous and non-ferrous metals as well as automobiles to be de-manufactured.

“Aside from the flood, barge traffic has been stable,” said Jeff Goldstein, CEO and chairman of Alter River Terminal and a Quad Cities native son. Alter’s facilities, like the rest of the river, were closed by the 2019 flood except for a couple of brief openings in in June.

If these figures aren’t more recent, it’s because none of the Quad Cities has a central port authority or district to collect and keep more up-to-date figures.

Bob Sinkler is a senior advisor at Dawson & Associates, “the nation’s premier firm for resolving complex challenges involving federal water resources and environmental regulatory policy and procedures,” according to its website. Before joining Dawson & Associates, Sinkler was director of water infrastructure for The Nature Conservancy’s North America Water Program.  Before that, he served as principal strategic advisor to the commander of the U.S. Army Corps of Engineers, where he assisted in setting strategic direction for the Corps.

He served as chief of Army Environmental Programs in the Pentagon, and commanded a Corps task force responsible for designing and constructing the $14.4 billion Hurricane Storm Surge System for the greater New Orleans after Hurricanes Katrina and Rita.

Before that, Sinkler commanded the Rock Island Engineer District and led the Corps’ response to the devastating Midwest floods of 2008. Since retiring from the Corps in 2013, he has been active in many river organizations.

Sinkler said that when he was with the Rock Island District, it was easier dealing with established port districts, of which Illinois has many, including in many ports much smaller than the Quad Cities. Even though it doesn’t yet have official existence, Sinkler likes to refer to the region as “the emerging Bi-State Port of Eastern Iowa and Western Illinois.”

He describes what he calls a “port authority gap” on the Upper Mississippi River between the International Mississippi River Port District in Illinois’ far northwest corner and The Mid-America Port Commission, established by a three-state compact between Illinois, Iowa and Missouri in 1999, which includes 26 counties in Illinois, Iowa and Missouri and is the only three-state port compact in the United States.

Could a similar port designation become a reality for the Quad Cities?  Sinkler points out that the five terminals on the Missouri River in Iowa are more organized than the dozens on the Mississippi River. There are about 50 terminals between Dubuque and Keokuk. Their combined activity could add up to a port district with as much traffic as the ports of Kansas City or Tulsa, he said.

Several Quad Cities business development organizations contacted by The Waterways Journal said that the idea has been raised and discussed before. In fact, Sinkler said he recently discussed that very issue with Paul Rumler, president and CEO of the Quad Cities Chamber of Commerce.

According to Sinkler, it isn’t so much open opposition that keeps it from happening. “It’s this Midwestern idea that everyone is an independent operator, and why create a new government entity unless it’s necessary?”

But in an era of increasingly intense global competition, could it be necessary? In January 2015, a 225-mile river zone including Cincinnati on the Ohio River gained a new Corps of Engineers designation as “The Ports of Cincinnati and Northern Kentucky.”

That designation was the work of the Central Ohio River Business Association (CORBA), a group of river-related businesses and ports that was only five years old. The designation included 10 counties in Kentucky and five in southern Ohio that border the river. By increasing the port’s size from a 26-mile stretch of Ohio River frontage to 226 miles, the designation helped the “new” port leap to be the No. 1 river port statistically in cargo tonnage handled, and the 13th largest of all U.S. ports, both “brown” and “blue.”

CORBA’s creators feely admit that marketing was a main driver in its creation. They say the designation raised their international profile, and that potential trading partners like dealing with one entity rather than several.

Even long-established ports see the advantages of enhancing their market recognition this way. The Port of St. Louis is marketing a 70-mile stretch of river dense with terminals, grain facilities and barge fleets as “America’s Ag Coast.”

Caption for photo: The Centennial Bridge, on the left, and Arsenal Island on the right, are key features of the Mississippi River in the Quad Cities area. Davenport, Iowa, is across the river, and Rock Island, Ill., is in the foreground. (Photo courtesy of Dawson & Associates)