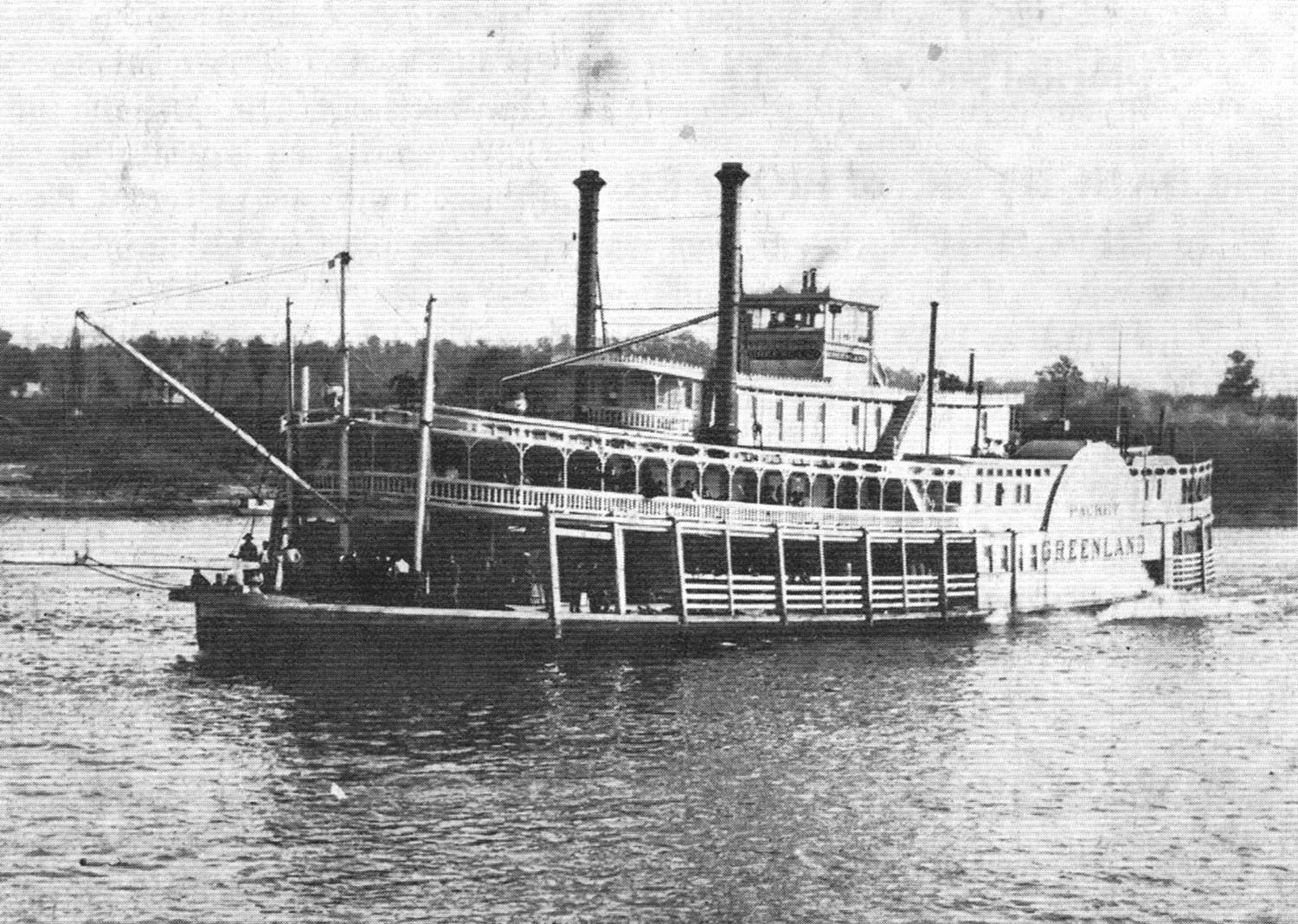 Of the 28 steamboats owned and operated by Greene Line Steamers, only one was a sidewheeler. The Greenland was built in 1903 by the Knox boatyard at Harmar (Marietta), Ohio. Constructed on a wooden hull measuring 210 feet in length by 32 feet in width, the riverboat was the largest packet ever built by the Greene Line. The overall width of the vessel was 49 feet.

The three sons of Capt. and Mrs. Gordon C. Greene—Wilkins, Chris and Tom—utilized the fore part of the texas as a nursery, bedroom and playroom. Capt. Tom Greene was born aboard the boat on February 3, 1904, while it was laid up for ice at Point Pleasant.

During periods of low water, the vessel was sometimes chartered to run between Cincinnati and Louisville. In 1917 the boat made several Pittsburgh-Cincinnati trips, sometimes operating in the Pittsburgh-Charleston trade.

Two boilers suppled steam to engines (recycled from the packet Zanetta) that had 15-inch cylinders with a 6-foot stroke. The Greenland carried the whistle from the packet Courier. The sidewheels were 28 feet in diameter with 6.5-foot bucket planks. The boat’s hull stern was built with a transom, sternwheel style, and had two rudders. There were 54 staterooms on the cabin deck.

Capt. Gordon C. Greene was both owner and master of the steamboat, which eventually ran primarily in the Cincinnati–Pomeroy–Charleston trade. On May 23, 1904, the Greenland departed Pittsburgh, filled with passengers, bound for the St. Louis World’s Fair. This was the first of four round trips that the boat made, and for those festive occasions a Kratz calliope (from the packet Cricket) was installed. Capt. Jesse Hughes and his bride, Telia Vaughn, took their wedding trip to St. Louis that year. Capt. Mary Becker Greene (wife of Capt. Gordon), famous for being a licensed steamboat captain, assumed command of the Greenland on occasion.

During 1917, the Greenland made several round trips between Cincinnati and Pittsburgh. It was about this time that the engines were replaced by those from the Henry M. Stanley; three boilers were also replaced. Also noteworthy for that year was the damaging of the hull when the boat ran aground on Bonanza Bar at Portsmouth, Ohio. The Greenland was promptly taken to the marine ways at Cincinnati, where repairs were made.

In January of 1918, when the horrific ice gorge occurred on the Ohio River, Capt. Greene felt secure in the knowledge that the Greenland was safely perched high and dry on the marine ways for repairs at Cincinnati. Ironically, it was lifted from the cradles by the force of the ice and was the only Greene Line steamboat lost. Only a coil of rope and the whistle were recovered.

Caption for photo: The Greenland underway on the Ohio River at Burkes Point. (Keith Norrington collection)