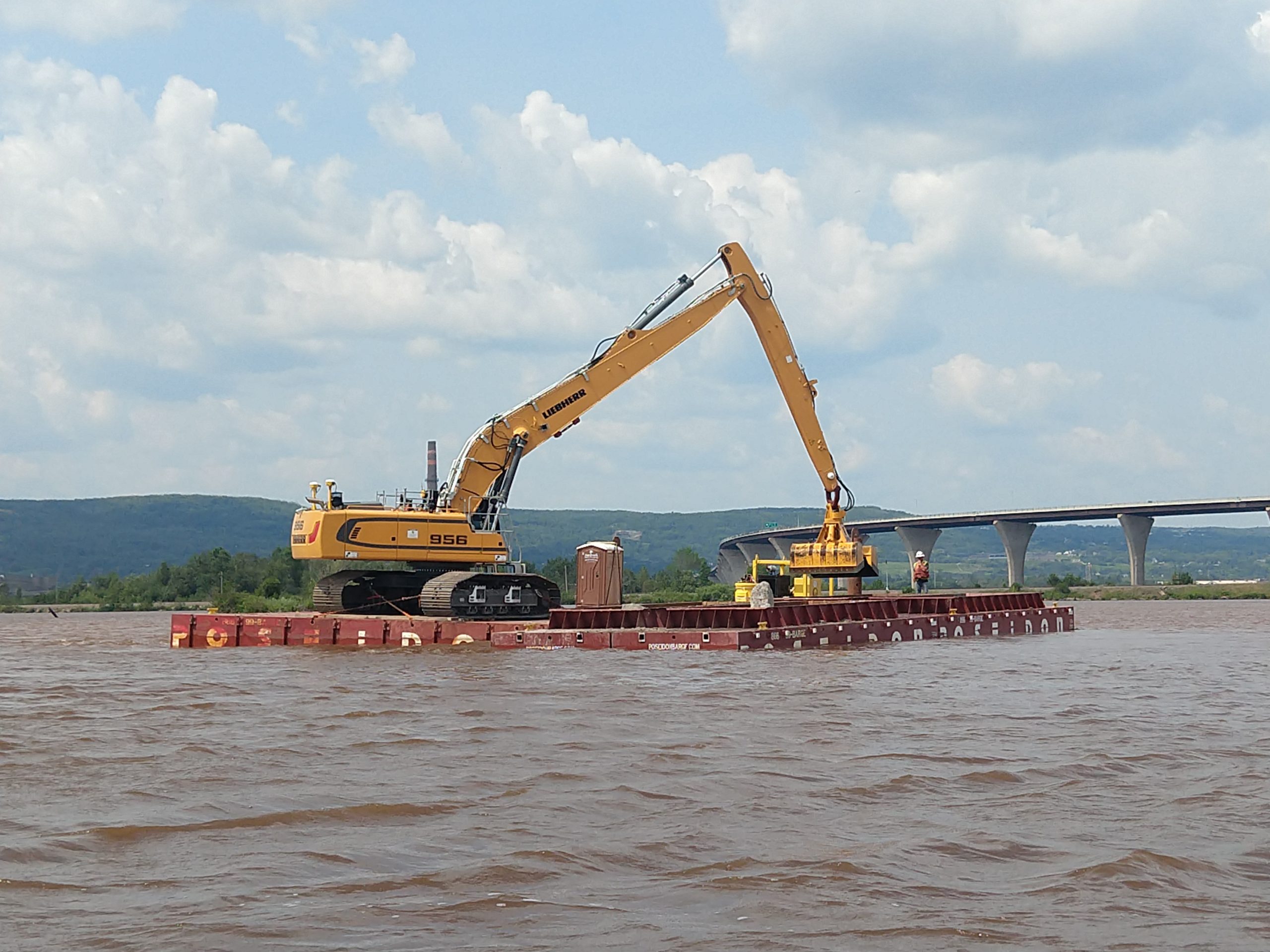 Dredging and Restoration on the St. Louis Turn Wood Waste to Beneficial Habitat

The third week of July, general contractor, Veit & Company Inc. of Duluth, Minnesota, along with Minnesota Department of Natural Resources and Barr Engineering Company, began a 2-year project to restore and enhance coastal marsh habitat and waters in Kingsbury Bay and Grassy Point, in Minnesota. At the end of the project 240 acres of fish and wildlife habitat will be restored. Veit expects work to be completed by December 2020.

The work encompasses two projects located one and a half miles apart. At Kingsbury Bay, 173,000 cubic yards of sediment that has been deposited by upstream erosion and a flash flood that occurred in 2012, will be removed to restore coastal and wetland habitat and improve recreational access. At Grassy Point, 177,000 cubic yards of wood waste will be removed, debris that in some areas has piled up to 16 feet.

On the upper end of the Duluth-Superior Port, along the St. Louis River Estuary, sit Kingsbury Bay and Grassy Point. These two areas were home to wood mills in the 1800s that left behind piles of wood waste on land and in the water.

While a demonstration dredging project at Grassy Point in the early 1990s showed dredging to be an effective wetland restoration technique, neither area has ever been fully dredged or addressed for clean-up.

Veit Gets to Work

To start the work, Veit built barge spreads to meet the size and draft needed for this particular project. Adam Vandenhouten, project manager at Veit, explained that each barge section is delivered by truck and have to be pinned together to create a larger barge that will accommodate needed equipment or storage. They have to look at the size needed for the equipment but also the weight of what the barge will be carrying to ensure the vessel won’t hit bottom. Once the barges are joined to the correct length, the equipment is welded in place. For this job, barges were built to 40 feet by 60 feet with 2.5-foot to 3-foot draft.

The main dredging work for the projects is being completed at Kingsbury Bay. The company is using a 345 Caterpillar excavator with a 3-cubic-yard clamshell and a 956 Liebherr long stick with a 3-cubic-yard clamshell to remove material. The excavators are placed on barges. In addition, two other hopper barges with 200 cubic yard capacities and 600 hp tugs are transporting material between sites.

“We’re dredging about two feet of vegetation that is being disposed of upland, and all material below that is being relocated to Grassy Point for habitat,” Vandenhouten said.

The removed vegetation is trucked to an upland disposal area. Some of the sediment is being used at an ongoing Corps of Engineers rehabilitation project that is taking material from this location and another project. The remaining sediment is being transported to Grassy Point for use as a cap in areas where it is not possible to remove the existing wood, such as where wooden stilts were embedded to support docks and buildings. The clean material is also being used to create upland habitat and reestablish aquatic plant and wildlife communities.

While some of the wood waste proved too difficult to remove, Melissa Sjolund, project manager with Minnesota DNR, said there was such a vast amount of wood waste left on this property that it would have been impossible to find an upland location to store it all. Leaving some of the wood and capping it made more sense.

“They’re excavating to depth and using the removed wood waste to build an island feature to shelter bay habitat and provide wind and wave protection. The wood waste was not treated with chemicals at that time so it can be safely reused. The sediment out of Kingsbury is used as a layer over the wood waste,” Sjolund said.

At Grassy Point, wood waste and wood sediment is mechanically excavated and beneficially reused as construction fill to create the 18-acre island-baymouth bar complex. The work includes removing invasive cattails and creating an isthmus to protect the restored wetlands from waves.

While problems along the St. Louis were identified in the early 2000s, the Kingsbury Bay and Grassy Point project areas were prioritized in 2013 as two of 12 Minnesota sites located in the St. Louis River Area of Concern (AOC) in need of habitat restoration.

“The majority of these projects are habitat restoration and not contamination, and high priority is given to restore lost wetland habitat along the St. Louis River,” Sjolund said. Despite the high priority given to restoring Kingsbury Bay and Grassy Point it took six years to begin the work.

“Since this is part of an AOC, there is a process we have to follow to find what projects need to be done and prioritized and that takes time. Plus it takes a long time to raise funds and find contractors. We’ve completed three habitat restorations in Minnesota with about nine more to go,” Sjolund said.

She further said that habitat restoration sites were prioritized by many stakeholders and then it was a matter of waiting for funding partners and access agreements. .

The combined Kingsbury-Grassy Point project is the single largest so far in the Twin Ports under the Great Lakes Restoration Initiative. These two sites are part of the effort to restore the lower St. Louis River — the headwaters of the Great Lakes and the largest freshwater estuary in North America — to a more natural state.

“We are replacing habitats that were lost through development for shipping and industry. The shoreline underwent drastic changes through dredging and fill that the industries required. We had lost natural shoreline transitions between land and water to docks, rip rap etc. Our goal is to try to increase natural shorelines and reestablish coastal wetlands,” Sjolund said of the work MN DNR and others are doing in the St. Louis AOC.