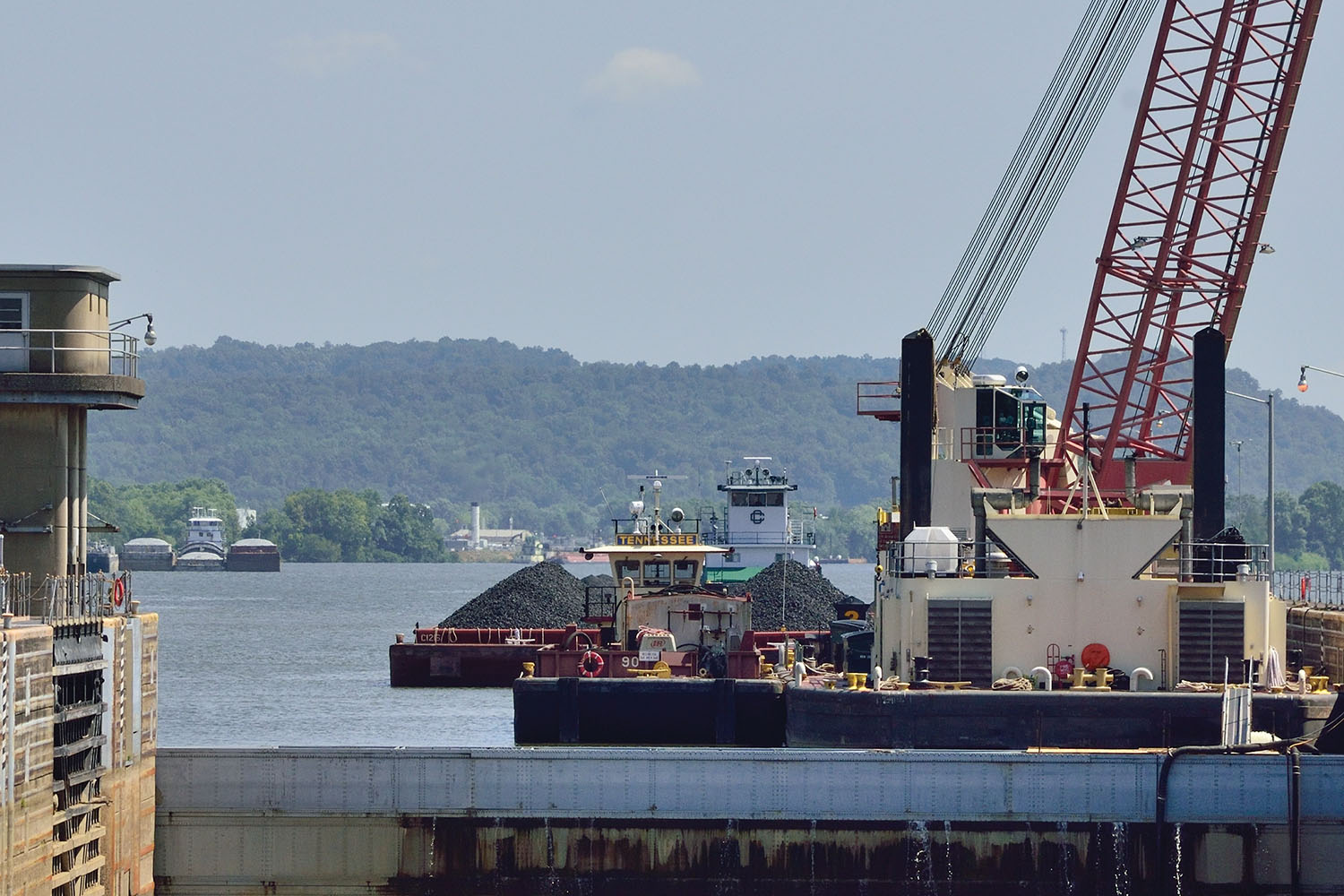 The first thing Billy Collins, lockmaster at the Willow Island Locks and Dam on the Ohio River, does every morning when he gets to work is to download the queue of waiting boats to an Excel spreadsheet and determine the sequence of lockages.

The main lock at Willow Island, at Mile 161.7, has been out of service since the first weekend of July for dewatering and 20-year maintenance. At times there are as few as six boats waiting to use the auxiliary lock, and at times the queue exceeds 30, with most needing a double lockage. Each double lockage takes about two hours.

Collins said he was told the cost per boat waiting in queue is about $1,500 per hour.

The main chamber will be closed through the end of October as the repair fleet from the Corps of Engineers’ Pittsburgh District works on the lower gates before moving on to the upper ones. The Pittsburgh fleet is considered the medium fleet by the Huntington District, which operates Willow Island and manages the Corps’ repair fleets in the Ohio Valley. The others are the heavy fleet based in Louisville and the light fleet based in Nashville.

“The industry’s doing their self-help thing. They came up with a procedure they wanted to do. I said, ‘Do your thing and I’ll shut the gates behind you,’” Collins said. Boats are doing the standard self-help procedure, with one boat pulling out the first cut of the other boat making its lockage.

As with most locks on the Ohio, Willow Island has one 1,200-foot lock and one 600 feet long.  Main locks can accommodate a boat and 15 barges, which is the largest tow most boats push, although at times some push as many as 25.

Collins said he schedules lockages three, four, five or six at a time in one direction depending on traffic.

“They try to give me 24-hour notice so I can let the industry know there will be a couple of hours delay tomorrow,” he said.

Willow Island is the newest locks and dam on the Ohio in the Huntington District, so it has had the least need for work so far, Collins said.

“I was told these locks were built on a 50-year life span, and we’re here,” he said.

Kevin McConnell, a foreman on the Pittsburgh fleet, said crews secure the gates so they can be lifted off their bases. Pintles and anchorages will be repaired, moving parts and seals will be changed out and rubbing fenders and other parts will be repaired or replaced, he said. Each gate is about 200 tons, he said.

Before the bulkheads could be set to dewater the main chamber, crews had to clear out about 30 cubic yards of debris, McConnell said.

Collins said lockages of recreational craft are being done on a restricted basis, but the lock will do one special lockage up and one down for a fishing tournament at the end of August.

Later this summer, the industry will have to deal with simultaneous main lock outages in the Huntington District. As work continues at Willow Island, the Louisville fleet is scheduled to arrive at the Robert C. Byrd Locks and Dam at Mile 279.2. Miter gate repairs on the main chamber at Byrd are planned to start around August 19 and wrap up around September 27, according to Chuck Minsker, public affairs specialist for the Huntington District.

Caption for top photo: A Crounse Corporation boat has tied off its tow at the upper approach of the Willow Island Locks and Dam as it prepares to assist upbound boats through the auxiliary chamber during repairs to the main lock. (Photo by Jim Ross)