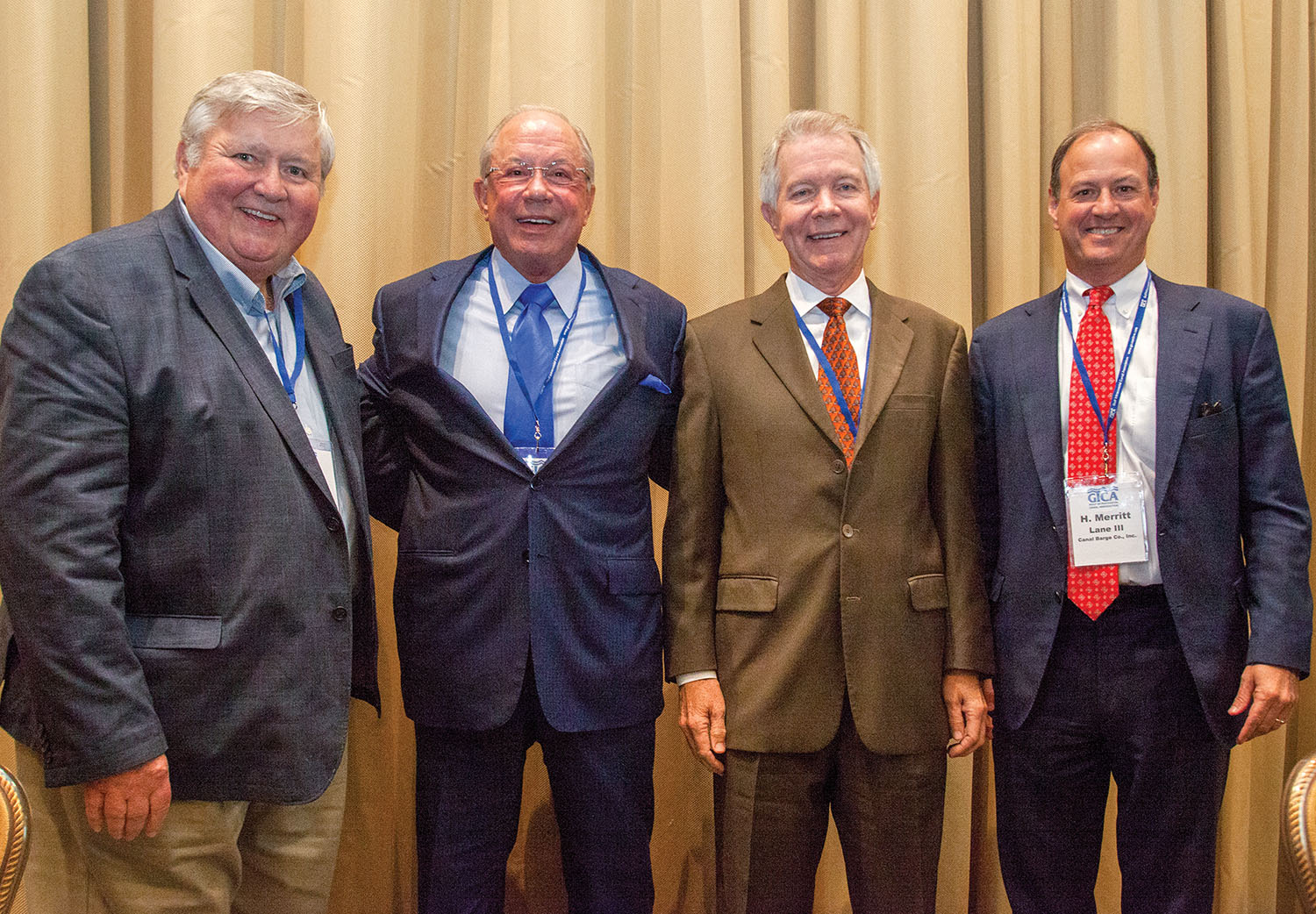 The seminar started with an in-depth look at current affairs in Washington, D.C., and how the nation’s lawmakers affect not just the Gulf Intracoastal Waterway (GIWW) but all the inland waterways, ports and terminals of the United States.

U.S. Sen. John Kennedy, the junior Republican senator from Louisiana, delivered the seminar’s opening address. Besides a general overview of legislative and administrative accomplishments over the past three years, Kennedy voiced his support for the Jones Act and for effectively funding the U.S. Army Corps of Engineers.

“In the current budget, the Corps of Engineers has more money than it’s ever had,” Kennedy told GICA members. “We expect the Corps to spend it well and wisely, and I consider spending in the Corps to be an investment.”

Kennedy also promised members of the U.S. Coast Guard that lawmakers plan to ensure that, during future government shutdowns, Coast Guard members will continue to get paid, the same as branches of the military that fall under the Department of Defense.

“I’m embarrassed that when we have the government shutdown … our military continues to get paid but our Coast Guard doesn’t,” Kennedy said. “We’re going to fix that.”

Mike Toohey, president and CEO of Waterways Council Inc., followed Kennedy and offered a waterway-specific look at Congressional appropriations. Toohey said 2018 brought much success for waterway funding, with a record $3.74 billion appropriated for the Corps’ operations and maintenance (O&M) business line. Total appropriations for the Corps neared $7 billion in 2018. August 29, 2018, brought the ribbon cutting ceremony for the Olmsted Locks and Dam project, which was four years ahead of the latest Post Authorization Change Report schedule and $330 million under the last cost estimate. Part of that success was due to a cost-share change at Olmsted to 85 percent funding from the federal treasury and 15 percent from the Inland Waterways Trust Fund (IWTF). And because of changes implemented in WRRDA 2014 and the increase of the IWTF fuel tax, lock projects at Lower Mon, Kentucky and Chickamauga are all estimated to be complete by 2024.

Toohey said, based on the success of the cost-share change at Olmsted, Waterways Council Inc. is calling on Congress to permanently change the cost-share for IWTF-supported projects from 50-50 to 75 percent general treasury funds and 25 percent from the Trust Fund.

If Congress does not implement a cost-share change, the balance in the Inland Waterways Trust Fund will likely be drawn down to the point where infrastructure projects will again experience significant delays due to funding constraints, he said.

Craig Montesano, vice president of legislative affairs for The American Waterways Operators (AWO), then outlined his organization’s top legislative issues this term, which include EPA Tier IV rulemaking, guarding against erosion of the Jones Act and limiting an effort to prohibit additional anchorages in the Hudson River. Montesano explained that AWO officials are concerned that restricting anchorages in the Hudson could become a slippery slope to limiting anchorages in other waterways.

One question from the audience addressed the Inner Harbor Navigation Canal (IHNC) Lock replacement project. Also known as the Industrial Canal Lock, the IHNC Lock is almost 100 years old, and the authorization to replace it is more than 50 years old.

Toohey said, with the Corps hoping to publish its project report by the end of the year, he hopes Congress will take up the issue in 2020.

“We expect that WRDA 2020 will authorize that project,” he said.

Spencer Murphy, general counsel at Canal Barge Company and an incoming member of the Inland Waterways Users Board, later gave GICA members an inside look at Users Board priorities. Murphy said a major focus for the Users Board will be updating the group’s Capital Investment Strategy, which prioritizes waterway infrastructure projects to be completed over a 20-year period. He said he expects a draft report by the end of 2019, with a published report in 2020.

Zooming in on the Gulf Intracoastal Waterway, Murphy said he expects project priorities to include the IHNC Lock replacement, the bypass channel near Calcasieu Lock, the replacement of Bayou Sorrel Lock near Baton Rouge, La., and the Brazos River Floodgates/Colorado Locks project in Texas. He also said it will be important to closely monitor any and all infrastructure legislation in Washington.

“Any infrastructure bill must include inland waterways projects,” Murphy said.

On the subject of the permanent cost-share change for IWTF projects, Murphy pointed out that towboats aren’t the only vessels passing through the nation’s locks.

“We’re the only payers into the Trust Fund, but we’re not the only beneficiaries,” he said.

As in years past, seminar attendees got to hear from representatives of both the U.S. Coast Guard and U.S. Army Corps of Engineers. Corps representatives outlined plans for dredging and maintenance within the Galveston, New Orleans and Mobile districts. Coast Guard chiefs of inspections then fielded questions from vessel operators regarding implementation of Subchapter M.

A towboat operators panel later took the stage to tackle some of the issues and concerns facing vessel crews, including retention of crew members and the impacts of this year’s historic high water season.

The panel of company executives spoke on what’s changed and what’s the same now versus when they first started in the industry. All agreed that the scale, scope and complexity of their operations have greatly expanded over the years, as have the cultures of safety and environmental stewardship.

Lane offered one example of what’s the same.

“Too much of the inland waterways infrastructure is the same,” he said.

Studdert, a former coach, brought a motivational tone to the panel.

On hiring, Studdert said, “Hire for attitude, not aptitude.”

Regarding commitment to excellence, he said, “Winners always know there’s something to win.”

Studdert, though, struck a serious tone when addressing what’s stayed the same among operators on the nation’s inland waterways. While the maritime industry is just as competitive as other industries, Studdert said all that takes a back seat to the camaraderie that exists on the waterways.

“In this business, we’re all professionals,” he said. “We’re all competitors, and we’re all out there fighting for the same deal. But I’ll tell you one thing we’ve got that [other industries] don’t: We’re friends forever.”

If a barge or a boat is in trouble, all the crew or shoreside operator has to do is call for help, and a fleet of vessels will respond.

“You’re going to be the first one to come to my rescue,” Studdert said. “And if something happens to you, I’m going to come pick you up. It’s real simple.”