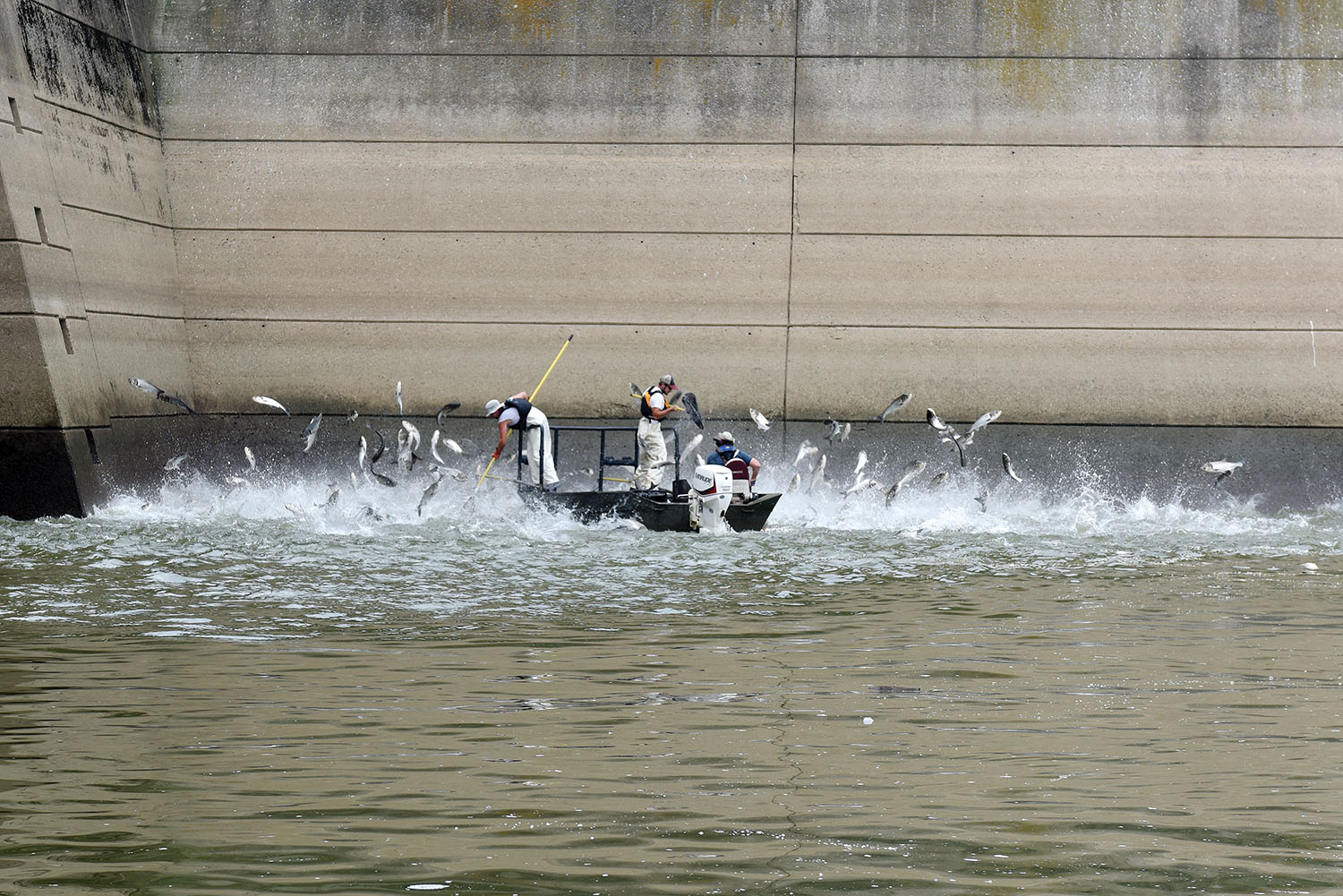 An experimental project designed to deter Asian carp from entering Lake Barkley is underway. Officials addressed stakeholders and media recently on the deployment of the bio-acoustic fish fence (BAFF) on the downstream side of the navigation lock and evaluation of the system’s ability to deter the movement of these fish.

“We’re anxious to get this test underway because it has the potential to be a real game changer in the battle against Asian carp,” said Ron Brooks, director of fisheries for the Kentucky Department of Fish and Wildlife Resources Agency.

The BAFF casts a barrier of bubbles, sound and light to deflect the noise-sensitive Asian carp from entering an area. Fisheries managers on the West Coast use a similar system to guide the movement of trout and salmon.

“Asian carp are sensitive to sound and disturbances in the water,” Brooks said. “The barrier, along with commercial fishing efforts already underway, aim to significantly reduce the number of Asian carp in Kentucky and Barkley lakes.

Due to heavy rains, work on the in-river portion of the project was delayed until weather conditions improved. Weather plays a key role in the installation of the system.

This year has been unusually wet. Tennessee Valley Authority and the Nashville District concluded flood risk reduction operations with the Great Lakes and Ohio River Engineer Division for the Ohio River July 17, setting a record of 210 consecutive days coordinating operations and releases from Kentucky and Barkley dams. The previous record was 97 days.

Jill Kelley, Nashville District project manager, said deployment of the BAFF at Barkley Lock is going to be delayed during the months of August and September to accommodate navigation traffic during a required maintenance closure at neighboring Kentucky Lock on the Tennessee River. During the closure, traffic is being routed through Barkley Lock to and from destinations on the Cumberland River and Tennessee River (via the Barkley Canal).

Installation of the BAFF resumes in October, and is expected to be operational this fall.  The field trial to test the effectiveness of the BAFF system is occurring over a three-year period and costs an estimated $7 million, which is coming from the Great Lakes Restoration Initiative through the Asian Carp Regional Coordinating Committee’s Asian Carp Action Plan, and leveraged with support from U.S. Fish and Wildlife Service base funding.

Bighead and silver carp are commonly found in the Mississippi River and in the Ohio River up to the Markland pool near Covington. Bighead carp have been reported past the Greenup pool, north of Ashland, but are rare above the Markland pool.

In addition to the main rivers, these species have also been found in most of their tributaries, including the Tennessee, Cumberland, Green and Kentucky rivers among several others. Recently, Asian carp have been found in the tailwater of Taylorsville Lake and Green River Lake. They are assumed to be in the Barren River Lake tailwater.

Caption for top photo: From left: Josh Tompkins, fisheries biologist; Nathan Rister, fisheries technician; and Matt Combs, fisheries biologist; Kentucky Department of Fish and Wildlife Resources, demonstrate electrofishing for Asian carp on the Cumberland River next to Barkley Dam in Grand Rivers, Ky., July 30. The U.S. Army Corps of Engineers, U.S. Fish and Wildlife Service, Kentucky Department of Fish & Wildlife Resources Agency, U.S. Geological Survey and Tennessee Wildlife Resources Agency are collaborating on the deployment of a bio-acoustic fish fence on the downstream side of Barkley Lock as part of a test of this sound deterrent to reduce the use of the locks by Asian carp. (Corps of Engineers photo by Leon Roberts)