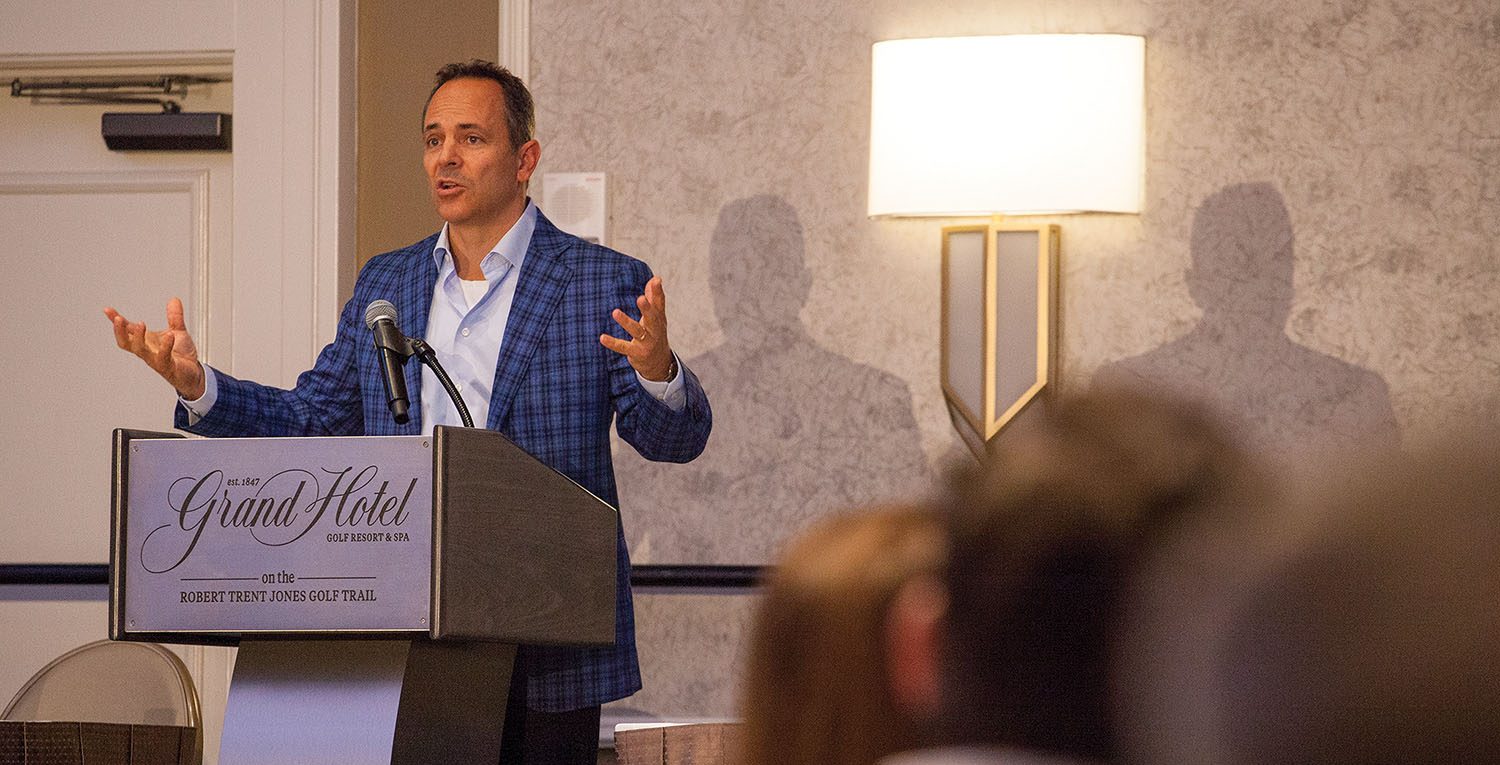 The authority is comprised of members from the four states directly connected to the Tennessee-Tombigbee Waterway: Alabama, Kentucky, Mississippi and Tennessee. Bevin admitted that it’s a bit unusual for a sitting governor to actively serve as chairman of the authority, but he chose to do so in order to highlight both the impact and potential of the waterway for the nation.

“There’s a lot of potential that exists on our waterways,” Bevin said. “The superhighway that is represented by this system is extraordinary. At a time when you see the pendulum of global economic activity swinging back toward North America in many respects, it affords us a tremendous chance to be able to do things intentionally that will benefit our region for generations to come.”

Bevin said his desire as chairman of the authority is to draw attention to the waterway and to assemble the federal delegation needed to authorize and fund a feasibility study into deepening the waterway from 9 feet to 12 feet. As important as the waterway already is, Bevin called it an “untapped gem,” with tremendous potential for future generations.

“We’re losing ground a bit with some of our competitors,” Bevin said, referencing other waterways with deepening studies already underway.

Bevin went on to highlight some of the business successes Kentucky has seen under his leadership, including Amazon breaking ground in May on its $1.5 billion Prime Air Hub at the Cincinnati/Northern Kentucky International Airport in Hebron, Ky.

Bevin said, when he surveys the political and business climate around the world, he sees North America as the “best gig going.”

Bevin said now is the time to capitalize on business opportunities, both in the present and for the future.

“This waterway system—we think it’s a superhighway now, but what it has the potential to be is literally at the very front edge,” he said. “This is why it’s so critical that we do more than ask for a feasibility study. We have to do everything in our power to drive this through, because if, a generation from now, we don’t have 12-foot capacity in this waterway, we will have been left behind.”

To mark Bevin’s time as chairman of the Tennessee-Tombigbee Waterway Development Authority and his presence at the conference, Mitch Mays, administrator of the authority, presented him with a framed flotilla flag from when the waterway officially opened in 1985.

“Kentucky Gov. Matt Bevin opening the conference was a great treat,” Mays said after the conference. “Gov. Bevin is a strong supporter of the Tennessee-Tombigbee Waterway and the inland waterway system, in general. His presence made this year’s conference one of the best ever.”

Other elected officials who spoke at the Tenn-Tom conference included Rep. Robert Aderholt (R-Ala.) and Rep. Bradley Byrne (R-Ala.). Bevin is seeking re-election for governor of Kentucky this November, while Byrne is running for the U.S. Senate in 2020. Aderholt is also up for re-election in 2020.

Conference attendees also heard from experts in the fields of the economy, energy and climate.

Loren Scott, retired professor of economics at Louisiana State University, offered his economic outlook. Scott first noted that the United States is in the midst of the longest period of economic growth on record, with month-by-month growth recorded since June 2009. Scott, though, said he sees two major threats to the economy: an anti-free trade movement (including tariffs) and the promotion of socialism in the United States. Of the two, Scott said the growth of socialism by far poses the greater threat to the U.S. economy.

“I don’t understand this,” Scott said. “The only people who still believe in this are Venezuela, North Korea, Cuba and the English department at LSU. Everyone else has figured out this is stupid.”

Later in the program, Mandy Gunasekara, a former executive with the Environmental Protection Agency who now leads the energy policy group Energy45, spoke on the successes of the Trump administration’s energy policies.

John Christy, distinguished professor of atmospheric science at the University of Alabama at Huntsville and Alabama’s state climatologist, critiqued the science surrounding climate change and the impacts of greenhouse gases. According to Christy, the models often used to forecast global warming do not line up with observed weather. Christy looked at temperature trends, the frequency and severity of hurricanes and tornadoes, and global drought. In each case, Christy said actual observed weather shows little to no change.

“The models have a problem,” he said. “They don’t let heat escape like the real world does.”

Christy actually argued that cheap, carbon-based energy is both good for humanity and good for nature.

“That helps the poorest among us more than anything else you can imagine, when they don’t have to pay as much for energy,” he said.

Christy also focused on riparian laws restricting the use of river water to irrigate farmland in Alabama. He advocated strongly for policy change to allow and regulate long-distance irrigation from waterways in order to expand agriculture across Alabama.

Conference attendees also heard reports from both the U.S. Coast Guard and U.S. Army Corps of Engineers. From the Corps of Engineers, Tenn-Tom stakeholders learned of recovery efforts following Hurricane Michael, dredging efforts on the waterway following flooding in February, and progress at both Kentucky Lock and Chickamauga Lock on the Tennessee River.

As always, the Tenn-Tom conference was well-attended and lively, with close to 200 present. But the absence of longtime Tennessee-Tombigbee Waterway Development Authority office manager Agnes Goodman Zaiontz was equally impactful on those in attendance. Zaiontz passed away May 29 at the age of 77 after working for the authority almost 35 years.

“So many have walked up to the registration desk and said it’s just not the same without her being there,” Mays said.

Fittingly, Mays opened the conference with a moment of silence for “Ms. Agnes.”

This year, money raised through the conference’s silent auction will be given in memory of Zaiontz to the Tenn-Tom museum that bears her name, the Agnes Zaiontz Tennessee-Tombigbee Waterway Transportation Museum.